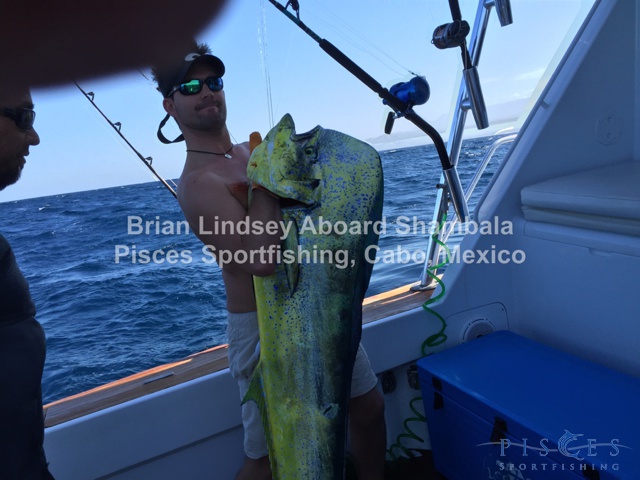 A few days ago a group of guys came into the office after their days’ fishing aboard Pisces 60 ft. Hatteras Shambala they were excited and sunburnt and eager to get some Pisces Sportfishing shirts.  We asked the group what they had caught and were stunned when 33 year old Brian Lindsey, a  physician from Indianola, Mississippi , said that he had landed a 102 lb. dorado.  We thought, well he’s probably a first timer and confused, he probably got a marlin.  So we asked what color his fish was to which he replied “yellow”, intrigued, we asked to see pictures.  Brian’s dad, Tracy, a long time Pisces angler, whipped out his camera and proceeded to show us a massive dorado which looked big in photos but enormous in the video.

Our first thought with our practiced eye, was “that looks like a 60 to 70 lb. fish”.  So we asked how he had come up with weight and were told that they had weighed it on a spring type hand scale and that it had said 102 lbs., just before the fish had been taken away by the fillet guys.  One of the staff called the dock to tell the fillet guys NOT to cut that fish up, but we were told it had been filleted as quickly as possible due to the hot weather, so that the meat would not spoil.  Now we wanted to try and verify the weight if possible and at the same time quickly entered the IGFA website to check the world record.  If the fish truly weighed 102 lbs., we knew without looking that this would be the biggest dorado ever caught on rod and reel.  The website revealed that the all tackle world record (the largest dorado ever legally caught on any kind of test line) was an 87 lb. fish caught in Costa Rica, a record held since 1976. 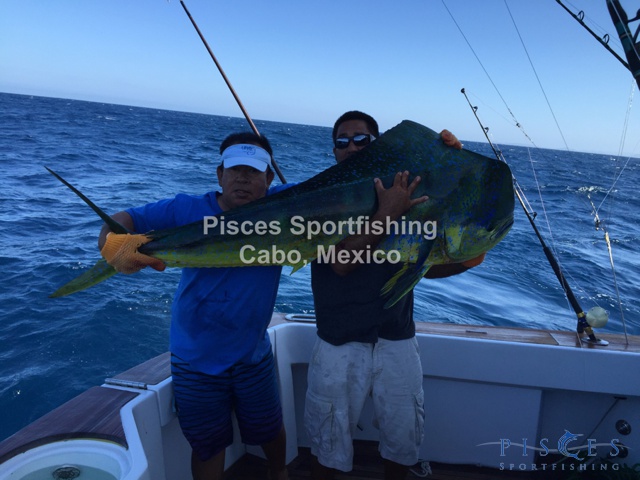 We happened to have an identical scale in the office so decided to test it by asking Captain Tony’s restaurant next door, for a product with a verified weight. They handed us a 4.4 lb. block of cheese, which when weighed on the scale, showed that the scale was pretty accurate.  It just happened that a group of scientists from the Mexican Fisheries Institute were having lunch at Captain Tony’s so we asked them to help verify the weight.  They asked for the length of the fish, which was 66 inches and we were told that the carcass weighed 36 lbs.  They used a scientific formula which gave them a result of 94 lbs., however, they said that they wanted to verify this with one of their colleagues who is an expert in dorado and asked for the photos and video – as of yet they have still not reached a final conclusion.  The fish had struck the silver and black trolled lure with the ferocity of a marlin, just two miles offshore near Pozo de Cota on the Pacific side and took Brian thirty minutes to bring to the boat on 50 lb. test line.

The jury is out still, if the weight is true, this fish would have been the all tackle world record, but a filleted fish cannot be a record. nevertheless this was a magnificent fish and a remarkable achievement by Brian Lindsey.  It also shows that Cabo San Lucas is still a world class fishing destination.

See the video below: