The first time I came across illegal striped marlin harpooners was on a Pisces-sponsored Gray FishTag trip in October of 2016. 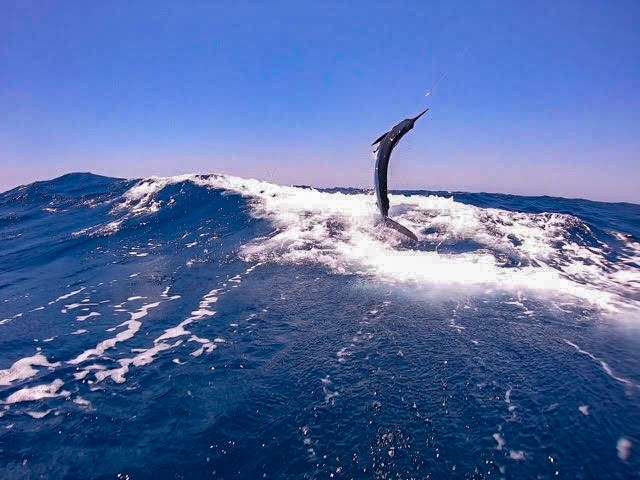 We ran nearly 50-miles to the Finger Bank before slowing on a batch of feeders; we deployed the 4-lure spread and dredges and soon several tell-tale sickle-shaped dorsal and tail fin of striped marlin sliced through the bubbling wake in hot pursuit.

Throughout the morning, the action was non-stop. We were able to place both satellite and spaghetti tags on many of the double-digit stripers that were hooked and released, while the marine biologist, Gonzalez took final water samples. 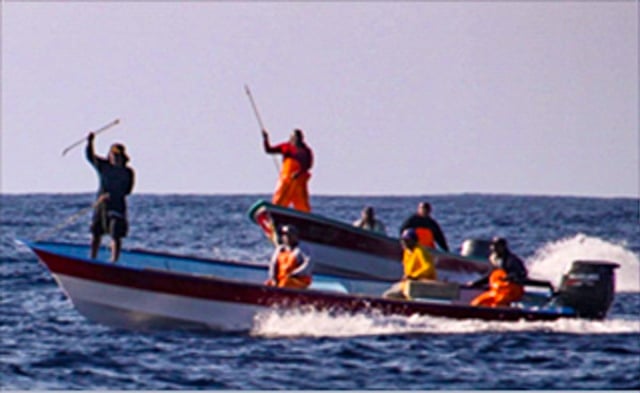 All of us in the cockpit stared as a small flotilla of Mexican pangas came into view. With one person standing in the bow clutching the gunnel with one hand and a harpoon in the other, the speeding boat skittered across the windblown swell. Our jaws dropped as the fellow on the bow flung his harpoon at a striped marlin, slowly tailing down swell. The line attached to the harpoon came tight while the panga slid to a stop as the smallish marlin was flung into the boat.

Later, Tracy Ehrenberg explained that the illegal striped marlin harpooning by pangas in Cabo San Lucas Finger Bank area is ongoing, despite Pisces Sportfishing’s response and continuing efforts to prevent the unlawful activity in the future.

According to Ehrenberg, the entire Los Cabos sportfishing community is making every effort to draw attention to the ongoing illegal harvest of billfish for commercial purposes. Striped marlin is being sold under a variety of different names – yellowtail, tuna, as well as others. There are even some restaurants and markets labeling the fillets or menu items as marlin in total disregard of current laws forbidding the sale of marlin.Throughout 2017 and into 2018, the size of the panga fleet participating in the forbidden activity had grown. 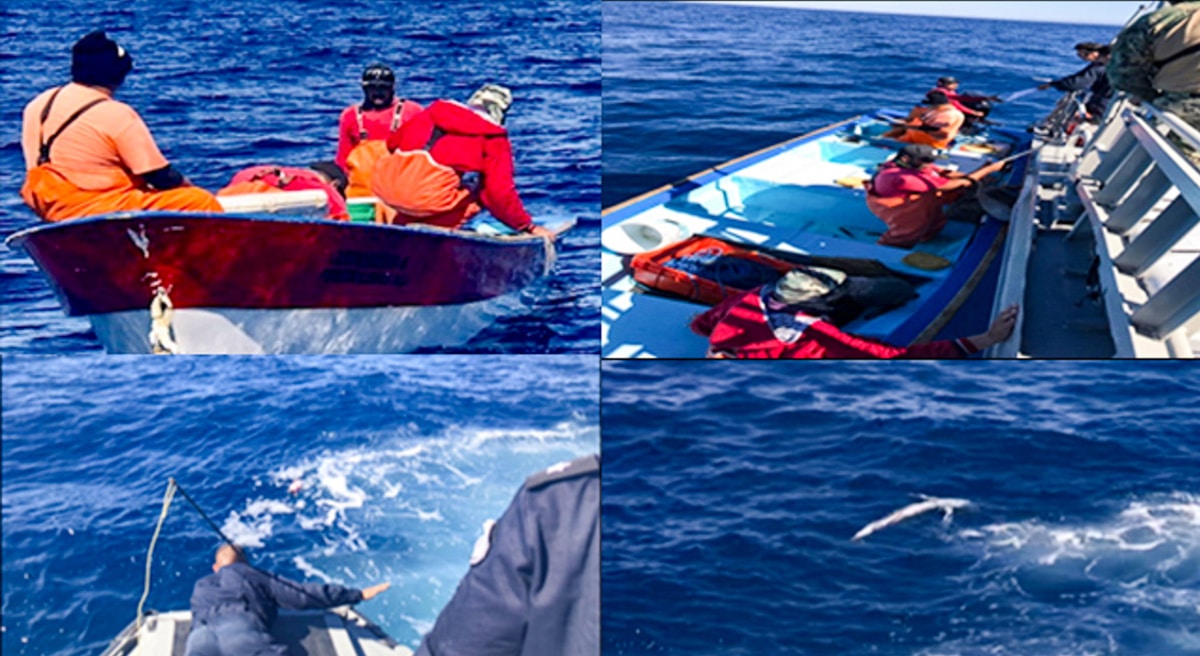 Reports were received from the Sportfishing sector in regard to commercial fishermen from Todos Santos (45 minutes’ drive up the Pacific coast from Cabo) capturing and commercializing marlin in the areas known as Finger Bank and Golden Gate Bank (where there is a concentration of these species due to schools of bait and other marine life which billfish feed on) killing them with handheld harpoons.

On the 21st of November 2018, a strategy involving SEMARNAT, FONMAR, CONAPESCA, and PISCES GROUP CABO, with a navy interceptor boat and a Pisces Sportfisher participating with observers from FONMAR on board and representatives of Sportfishing.

The result of the project was the impounding of a 22-foot panga with S.C.P.P Punta Lobos inscribed on the hull along with Punta Lobos XLII and registration number 0304182513-5 powered by a 115-hp Suzuki outboard motor, four-stroke.

This action occurred when the crew of the fore-mentioned boat, was seen chumming mackerel, to attract the marlin to the surface, where harpoons were then used to spear them.

When the fishermen became aware of the patrol boat’s presence advancing towards them, they threw their catch, consisting of chunks of marlin into the sea which was observed by Fonmar observers and local Sportfishing representatives. 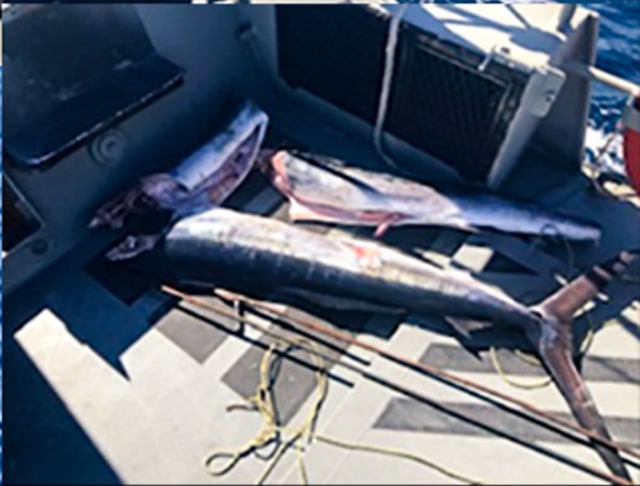 mackerel as well as two hand-held harpoons wrapped in canvas along with three marlin without heads or tails weighing close to 100-pounds.

Immediately a search was made of the surrounding waters where marlin carcasses were found floating; those were secured, and a formal report along with the impounding of the fishing boat, motor, catch, and harpoons – possession and use of which are prohibited by law – was executed and all the fish that had been slaughtered by the crew on that boat was confiscated.

In the dark halls of Mexican Justice, their boat and equipment were ultimately returned. Depending on the commercial permits of the crew, the marlin killed may have been deemed incidental catch, or they may have been fined some undisclosed amount. It has been difficult to ascertain what, if anything, was done. The only thing that you can be sure of is whatever the consequences, it didn’t seem to be much of a deterrent.

An avid 58-year-old angler, who described himself as going on 25, a marlin fishing devotee that has fished Venezuela, Costa Rica, Guatemala, St. Thomas, Madeira and Australia although Cabo has become his preferred destination.

He became hooked on offshore fishing while chasing shrimpers in the Gulf of Mexico off the Texas Coast. His obsession led him to ultimately acquire a Captain’s license and to start his own charter business out of Sabine Pass, Texas.

He frequently found himself going to the limit to reach the marlin grounds off the Texas/Louisiana coast; often he foolishly stretched those limits by going 120 nautical miles out to the Shell Auger Semi-submersible rig aboard a 25-foot Sea Cat! Eventually, he realized that broadening his horizons would be wiser, and he could follow the billfish to feed his expanding obsession for marlin fishing.He shared the following:

“It took me 58 years to have a day like I had in Cabo recently,” he gleefully recalled.

He and his wife took a short three-day trip to Los Cabos just for fun as they often do – fishing was optional. However, flags fluttering from the outriggers on so many of the boats in the marina caught his eye. When he stopped by the Pisces Sportfishing office, he was delighted to find out his favorite boat, “Rebecca,” was available. 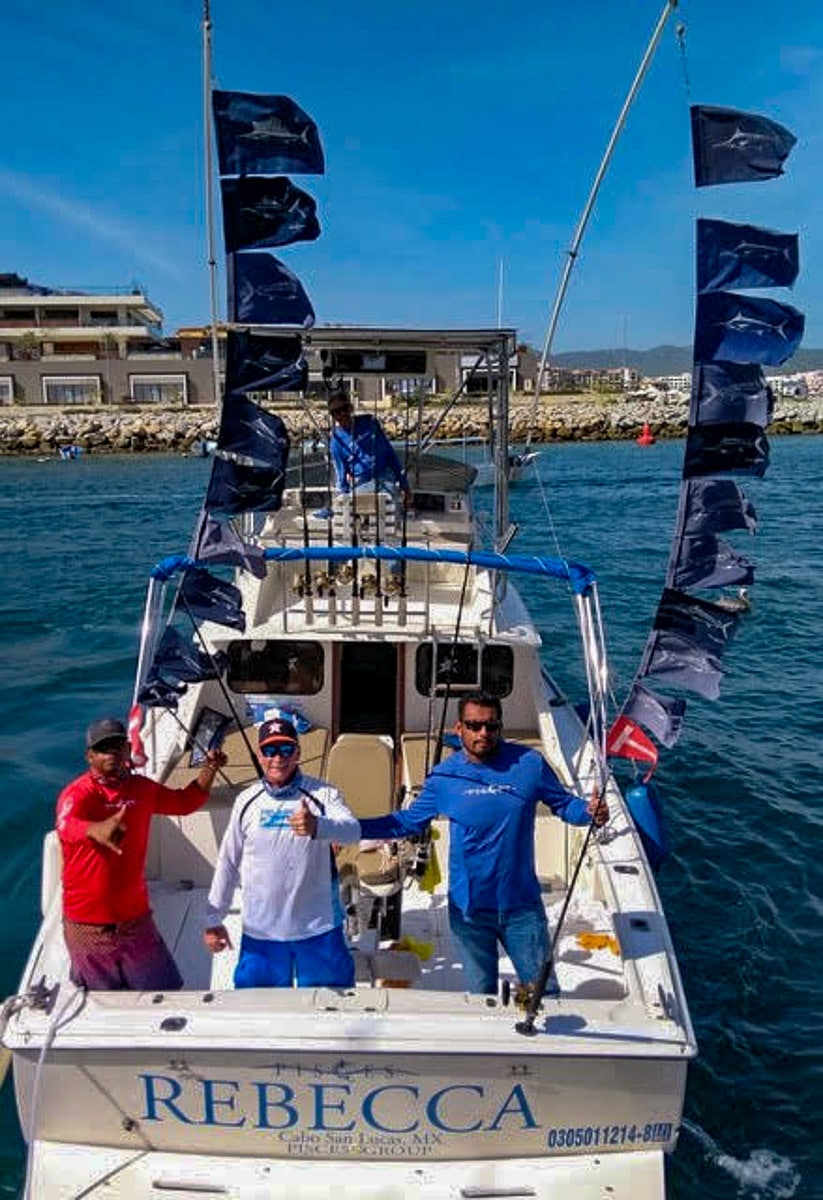 Following his trip, Rebecca Ehrenberg posted his catch; “20 striped marlin and one sailfish Released Saturday aboard Pisces 31-foot Rebecca for a solo angler that has been fishing with Pisces since the 90s.”“I was completely exhausted but very, very happy,” the angler observed adding. “striped marlin are the perfect sportfish, in my opinion. The perfect size.”

However, in a second letter, he offered some more observations that had dampened his enthusiasm.

“To whom it may concern,

I’ve been fishing in Cabo for many years. Only recently have I seen small 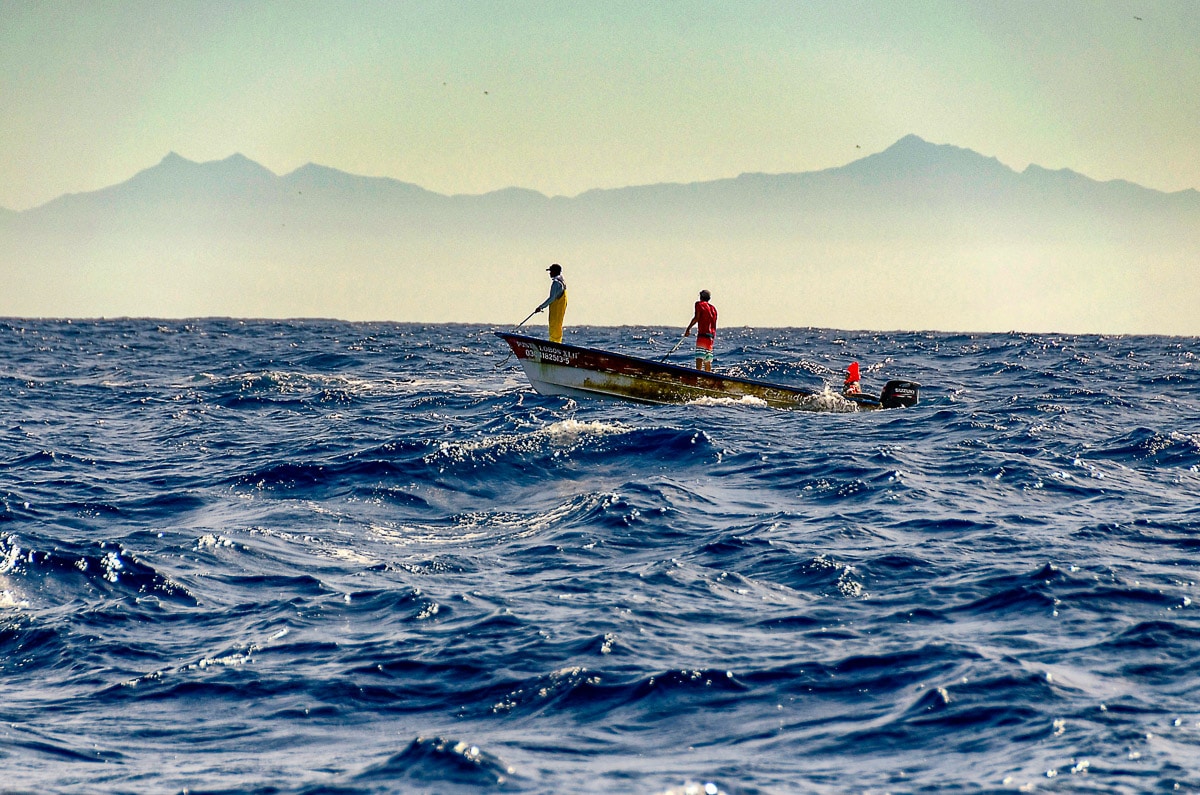 Pangas with 2 to 3 men on board, chasing and harpooning striped marlin.On previous trips, I have seen this at the Finger Banks in particular.

Last Saturday, September 29, 2019, I was fishing on the Pisces boat named “Rebecca,” and encountered these marlin killers once again. In a new twist, they put out buoys only a few miles off the shoreline with a single or multiple lines to hook the marlin before harpooning it.

I witnessed a small (75-pounds or so) marlin helplessly swimming in a circle around the buoy trying to throw the hook – in short order, the harpoon crew came over to finish it off.

My question is: Is this legal? If so, how many are these commercial fishermen allowed to keep? If there is not a control of this type of fishing, it will certainly hurt the resource.

For the record, every marlin has been released by the Pisces crew since I have been fishing with them!

They Are Harpooning Marlin! Slaughtering Up To 200 A Day!https://www.gringogazette.com/?q=content/they%E2%80%98re-harpooning-marlin#sthash.6QxFADrf.dpbs

What should one do upon observing similar behavior?

Below is Rebecca Ehrenberg’s recommendations;

1) Take lots of photos or videos,

2) Write down the boat registration number if it is displayed on the sides, bow or stern of the boat,

3) Make a note of their precise lat/long coordinates or location.

4) File a report/official complaint of activity to CONAPESCA or with Pisces Sport Fishing directly at the office number USA 619 21819 7983 or MEX +521 6241431288 Email info@piscessportifshing.com so they can assist in creating an Official Complaint or follow up immediately and inform authorities to take action/detain them right away possibly.

5) Do not consume marlin (or dorado) in restaurants or buy marlin from anyone (fish markets, fish vendors, on the dock). If you see fish being sold at a restaurant, advise the manager you will not be eating at this restaurant again and that you will pass the information on to your friends.Note: Most tourist are not aware that Marlin and Dorado are Sport fish and NOT allowed to be on menus in restaurants in Mexico. (If you caught the fish yourself, it is legal to have a restaurant prepare them for you.)

The more people start expressing their intolerance of marlin and dorado on the menu, the more of an impact we can make, and again, begin to create awareness and hopefully enforcement of the law. Especially noteworthy is increased international exposure for this subject, and so, the more tourists report this and are concerned, the bigger the chance of pressuring government officials to enforce laws and do inspections, etc..Rebecca Ehrenberg 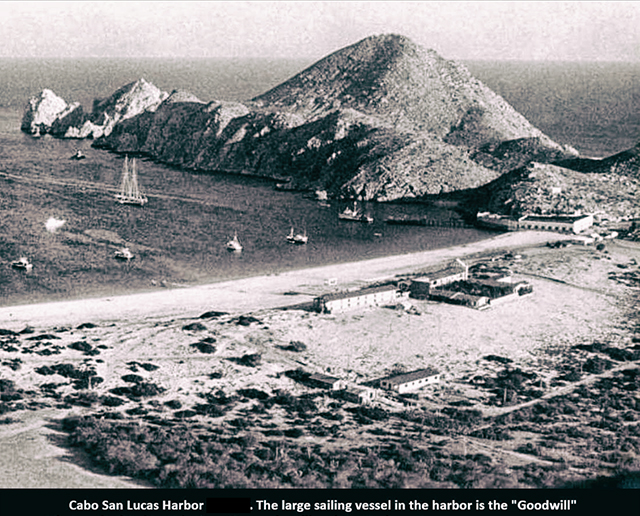 In 1955 Cabo San Lucas was a “Cannery Town” – population about 100. Baja writer Gene Kira tells a story about Bulnes‘ first encounter with a billfish. “One day, as he hurried down the cannery’s famous wooden pier, he spotted something splashing out in the water. At first, he thought it was a bird or a seal, but then he realized that it was a large striped marlin, hooked on a hand line held by one of the boys.

Years later, realizing that the most important activity in Mexico was sportfishing, Luis Bulnes observed, “Cabo San Lucas has more striped marlin than anywhere in the world and it is unique and irreplaceable. You can build a golf course anywhere, but these marlin are only here!” 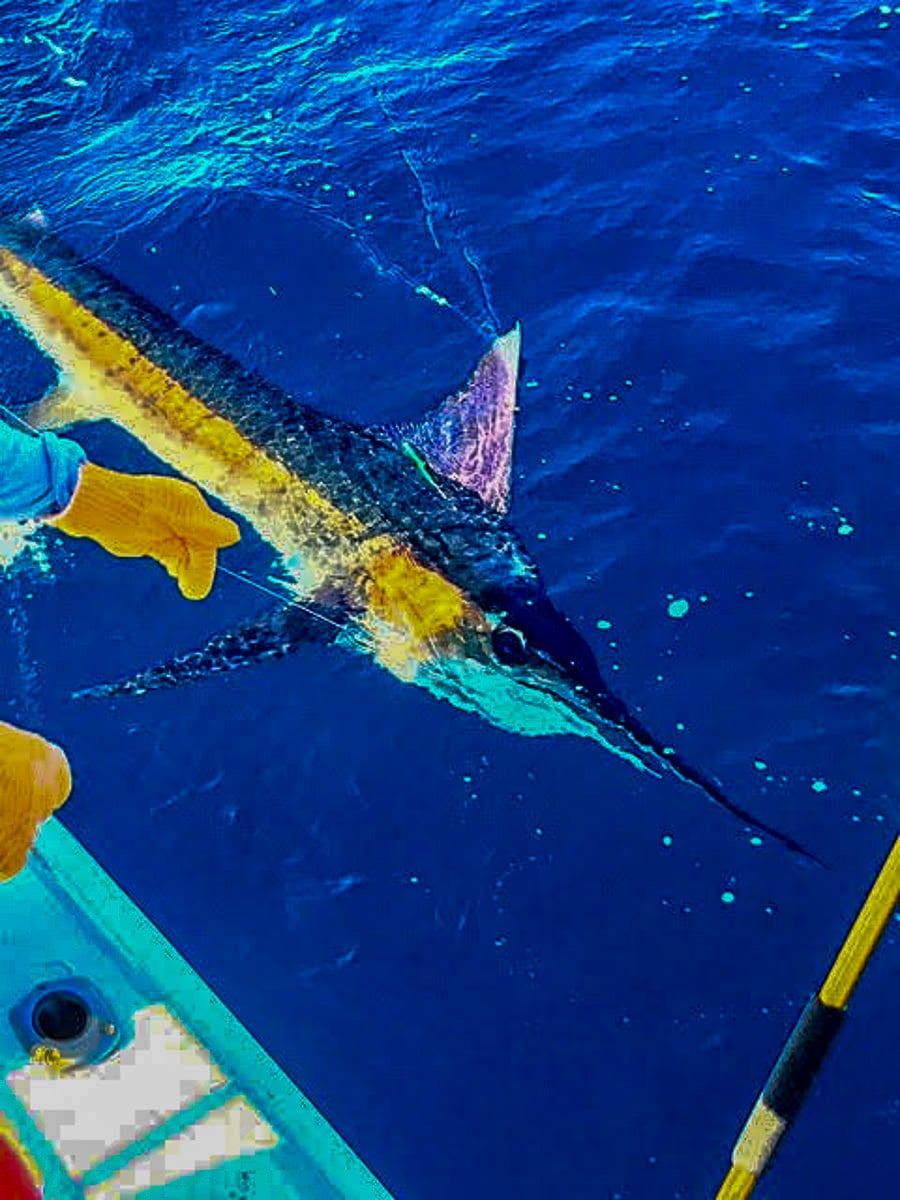 Fish Association, Billfish Foundation, and many others, encourages releasing billfish to preserve the resource.

Throughout Baja local fleets, Captains and crews consciously make every effort to release billfish, as well as use circle hooks that are less damaging to the fish. They are understandably disappointed when after all of their efforts, a few local commercial fishermen are allowed to continue their flagrant abuse of laws designed to preserve the billfish for Sportfishing that continues to be an essential piece of the Tourism component. 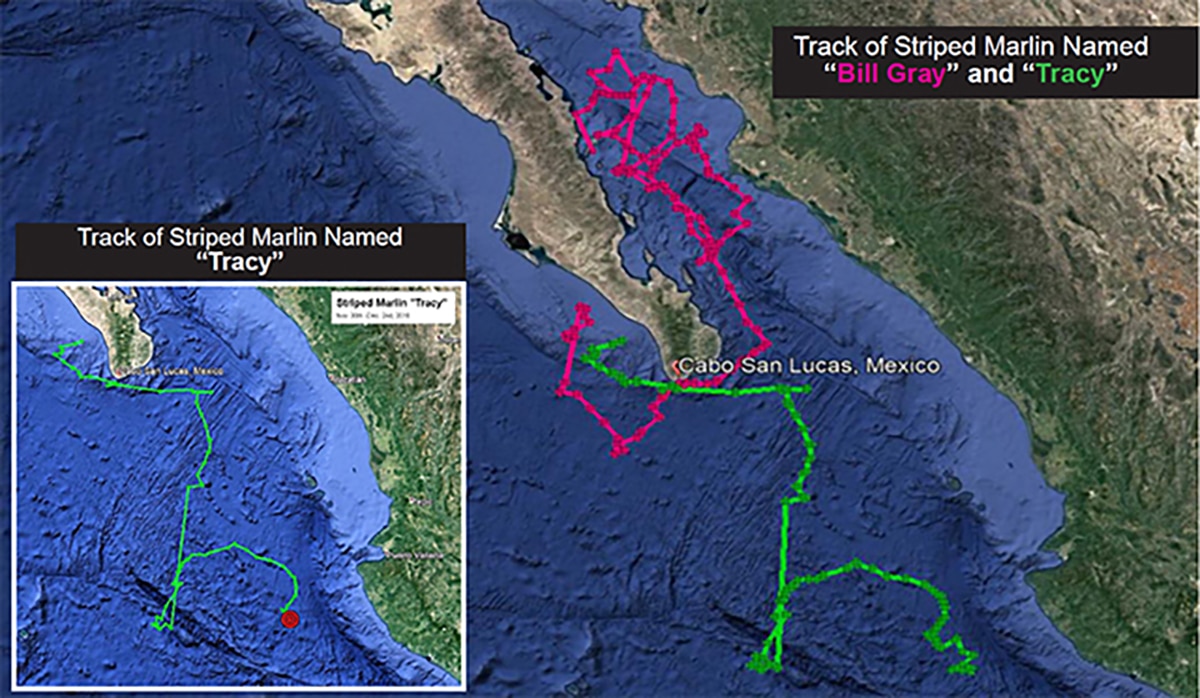 The Striped Marlin “Tracy” was caught by angler Dave Bulthuis of Costa Sunglasses and tagged with a satellite tag (PSAT) on Nov. 1st, 2016. The PSAT stayed on the fish and collected data for 38 days.

At its closest point, the fish was 9.05 km (5.6 mi) from the beaches of Los Cabo. The Striped Marlin in total traveled an approximate distance of 1488 km (924 mi) in a southeast direction. During that time period, the fish traveled over the Mazatl?n Basin and went on to spend 10 days around the Rivera Fracture Zone. 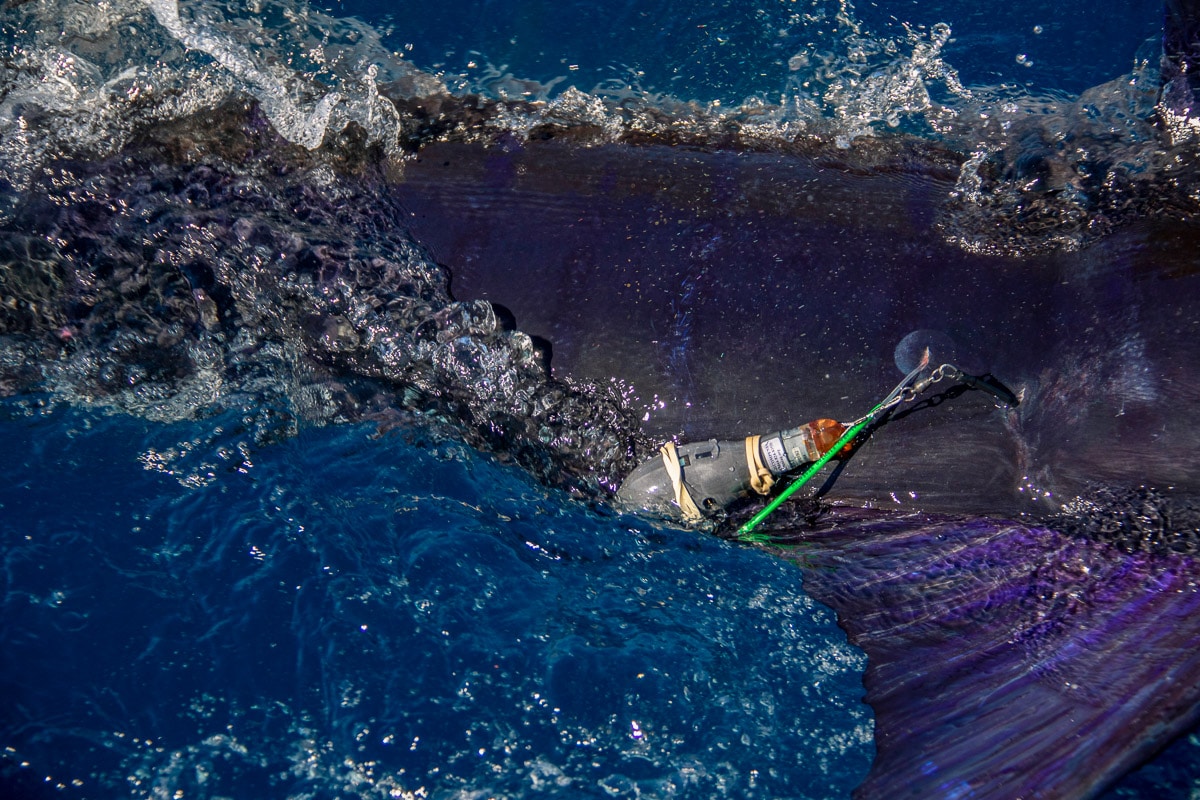 The Striped Marlin exhibited a large vertical movement pattern which varied depending on daylight or darkness.

At nighttime, the average depth was surface to 3 m with occasional dives to 50 m.During the daytime, the fish had extensive vertical movements with an average depth of 55 m, and rapid dives to 70 m followed by rapid ascents to 30 m.

Both Striped Marlin “Bill Gray” and “Tracy” were tagged on the same day, however one fish went north to the Sea of Cortez and the other fish went south. They both also demonstrated a vertical movement pattern similar in profile to swordfish, with nighttime hours spent at the surface and daytime hours spent at depths 40-80 m.

The Striped Marlin “Bill Gray” was caught by angler Dave Bulthuis of Costa Sun glasses on Nov. 1st, 2016 and tagged with a satellite tag (PSAT). The PSAT stayed on the fish and collected data for 68 days.

At its closest point, the fish was 2.66 km (1.65 mi) from the beaches of Los Cabo. The Striped Marlin traveled a total of approximately 2,485 km (1,544 mi) in a track around the tip of Baja and North into the Sea of Cortez. While in the Sea of Cortez, it made large circle patterns exhibiting a feeding behavior until it was finally caught and harvested near Isla Carmen.

The Striped Marlin exhibited a very large vertical movement pattern which varied depending on daylight or darkness.

It had an average nighttime depth of surface to 10 m with an occasional dive to deeper depths. The fish illustrated extensive vertical movements during the daytime, with rapid dives to 125 m followed by ascents to 15 m. Overall the Striped Marlin had a daytime average depth of 50 m.