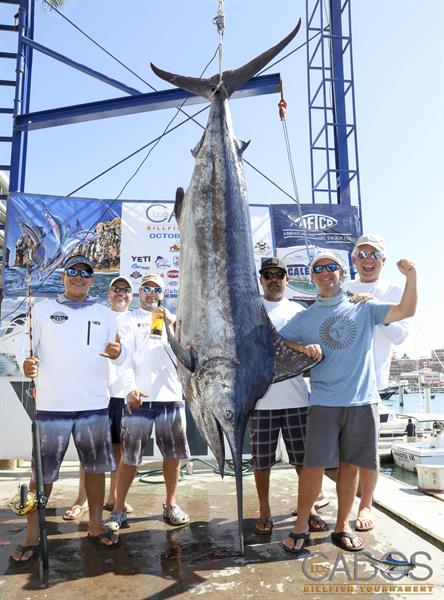 We spoke this morning with John DeDominic unofficial winner of the Los Cabos Billfish Tournament. John landed a beautiful 378 LB black marlin on the second day of the three day event that put him in the top slot. He told us “we were strictly targeting black marlin, by fishing the shallows. We were all alone on the Cortez side, we don’t like to fish near other boats. It’s said be a hero or zero”. By choosing to fish this way John was definitely the hero of the tournament. John is originally from New Jersey but now lives in Cabo and works as a realtor while pursuing his passion of saltwater fishing. John has been fishing the waters around Cabo for twenty years and is has clocked up a lot of experience and knowledge. John is no strange to success in fishing tournaments, this past summer he blazed across the scoreboard of the East Cape Bisbee netting $118,000 for the game fish categories and in years past he earned the largest payout for billfish releases in the Bisbee Black and Blue when he won $140,000. He has placed first and second in pretty much any tournament he has entered whether it is on the recently sold Maybe Manana or in the Atlantic or Pacific for every type of billfish species, he obviously knows what he is doing.  This year John fished with his friend from Hawaii Mike Hennessey aboard “Pangalisa” a 31 ft. center console Edgewater with twin Yamaha 250 outboards and 23 year old Captain Gonzalo Castillo and mate Freddy, both from La Playita. On the first day of the Los Cabos Billfish Tournament he hooked a large black marlin that he estimated at 500 LBS fought stand up for two and a half hours, before the fish got off, they did though get some epic video footage. Day two was “the redemption fish” as John put it, “we were fishing with small tuna for bait, my line got bit and at first we were unsure what it was, we thought it might be a shark as it just pulled steadily.  We had it at the leader within ten minutes, but it was really aggressive jumping at the leader, so we let it go again before being able to tame it an hour and a half later”.  It was a special day for John as it was his mom’s birthday and she will be attending her first ever awards banquet tonight in Cabo to her son claim his prize.

Second place fish was a very nice blue marlin aboard Reel Energy that tipped the scales at 370 LBS.

Third place was claimed by the well-known team Chupacabra with 321 LB blue on the final day.

Overall 95 billfish were caught consisting of 56 blue marlin, 36 striped marlin, and 3 black marlin were caught. We know there are big fish out there; Sea Angel was hooked up to one for six hours before losing what was surely a large fish.

The largest Tuna perhaps ever caught in the tournament was taken by Rocky Mountain Hooker an impressive 285 LBS on day three. 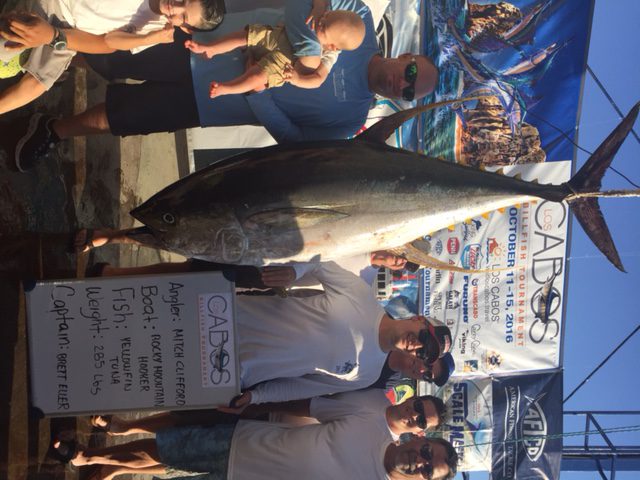 Largest wahoo went to Reel Gold for a 46.60 LB specimen and no dorado were weighed over the stipulated 25 LBS

These results are unofficial and prizes and monies will be given tonight at the Playa Grande Resort.