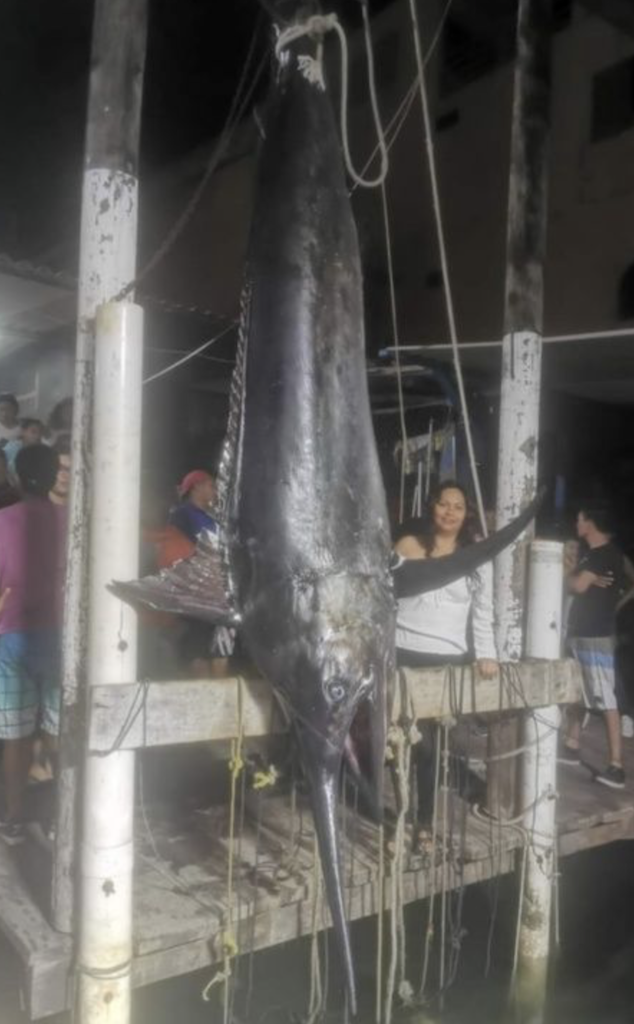 849 lbs Black Marlin, biggest caught in the area of Barra

This week a giant fish caught over on the mainland of Mexico, at Barra de Navidad, Jalisco, went barely perceived, but the massive Black Marlin was the biggest ever caught in the area and we had a chance to speak with the angler, Osiel Arteaga Aguilar and get all the details.

Osiel is a commercial fisherman by trade but also loves sportfishing. He is usually out there daily, fishing for snapper and grouper, which he has been doing since was fourteen years old. When sportfishing boats visit the area, he goes with them as a deckhand and has also fished the Sea of Cortez and Mag Bay. He says things are very tough right now, due to the Corona Virus, with no business. So he takes his 24 ft panga outfitted with a 50 Yamaha outboard engine and not much more, catches a fish, sells it, buys fuel, some Pan Bimbo (Bread) and three Coca-colas; one each for him and his two deckhands, Jose Zamora, 35 years old and Jesus Zamora, 30 years old, and they head back out again.

Last weekend they went out about six miles and hooked a Blue Marlin that was 176 LBS, on his favorite sportfish gear, a Penn International 50 TW with 100 lb. mono and 80 spectra and his lucky pink and purple lure made by a friend in Guadalajara. The catch was a good sign and as usual they prepared to go out the next day.

A lot of boats headed out looking for a catch but the weather was on the rough side, they fished the area close to Barra with no luck and then along with the fleet continued to fish and ended up 24 miles offshore but the wind was picking up and knowing their boat was not fit for that distance and weather, decided they should turn back. They had caught nothing.

They kept their gear in the water as they returned home, and when they were seven miles offshore they caught a small Striped marlin which was landed quickly, then continued to head back home.

At six miles from shore something hit their lucky pink and purple lure about 220 feet behind the boat, Osiel assumed it was another Striped marlin. Boy was he wrong! 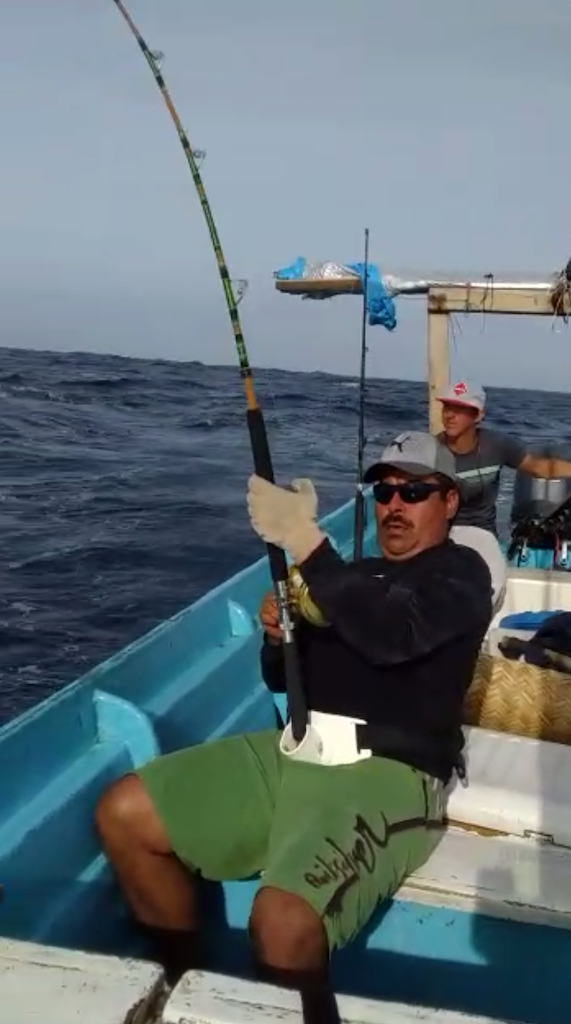 Osiel fought the fish aboard his 24′ panga (skiff) for 7 hours.

They saw the head, then shoulders, then half the body emerge from the water in a powerful thrust – the moment was suspended in time for a split second where all he could think and say was “Chingada!” and the fight was on. They never once had the fish behind the boat, it took off dragging them behind as they struggled to keep line on the reel and the butt of the rod in the small fighting belt.

The giant marlin towed the panga back out to sea as they struggled for six hours at which point the fish died. They felt it starting to go down and quickly attached another line with a lead sinker they use for snapper. Osiel felt that it caught on the lure and now with two rods and reels attached began bringing the fish up between them. It took them another hour but finally they had the fish alongside and noticed they were 12 miles offshore.

I have no idea how they got that fish in a panga but according to Osiel, they managed to get half the fish up over the side of the panga, then put a rope around the tail and swung it clockwise so the belly of the fish was across the middle of the panga with the head sticking out one side and the tail the other.

They then had to travel the 12 miles back in windy conditions in the small boat with the heavy fish and three men aboard. Making it back after dark the whole town had turned out to greet them. The next problem was weighing it. The regular scale did not go far enough, but a friendly Canadian fisherman came to the rescue and offered his electronic scale which had everybody gasp when it registered 386 KILOS or 849 LBS.

The fish was carved up and shared amongst the excited locals, only thing was by the time Osiel, happily giving fish away realized, it was all gone – he did not even get to try it.  Nevertheless, he felt very satisfied at having caught the biggest fish in his life and to be able to help the people of his town during this difficult time.

Through satelite tagging studies on Marlin conducted by Pisces and Grayfishtag Research, we have seen that many of the fish travel from the waters surrounding the Baja Peninsula to Mainland Mexico each year. We have seen an increase of fish even just in the marinas in Cabo due to the global pandemic of Covid 19 and we are sure to see bigger and more fish once the season opens back up for Sportfishing in Mexico. No matter what though, Mexico has extraordinary fishing and we cannot wait to get back to it!