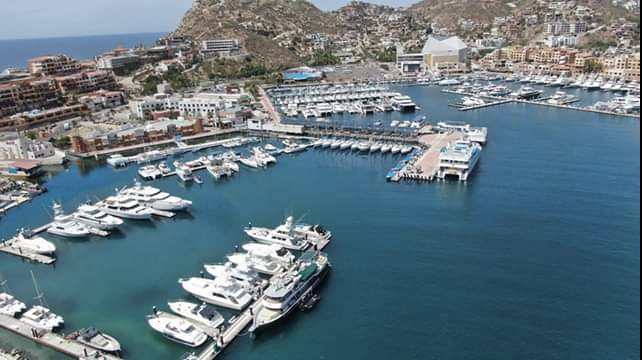 The quiet Cabo Marina during Covid 19

We know we have been MIA on our reports here on the web, but we hope you are following us on Facebook and Instagram, where we post updates more often; including live reports from the docks or boats. If you don’t follow us yet, simply click on the links above and give us a like 🙂

Now, we thought we would give you the roundup of a little bit of the scene in Baja the past few months, starting out with the status in Cabo from the Pandemic and Re-opening dates for activities, as well as this last week of fishing out of Cabo and San Jose. 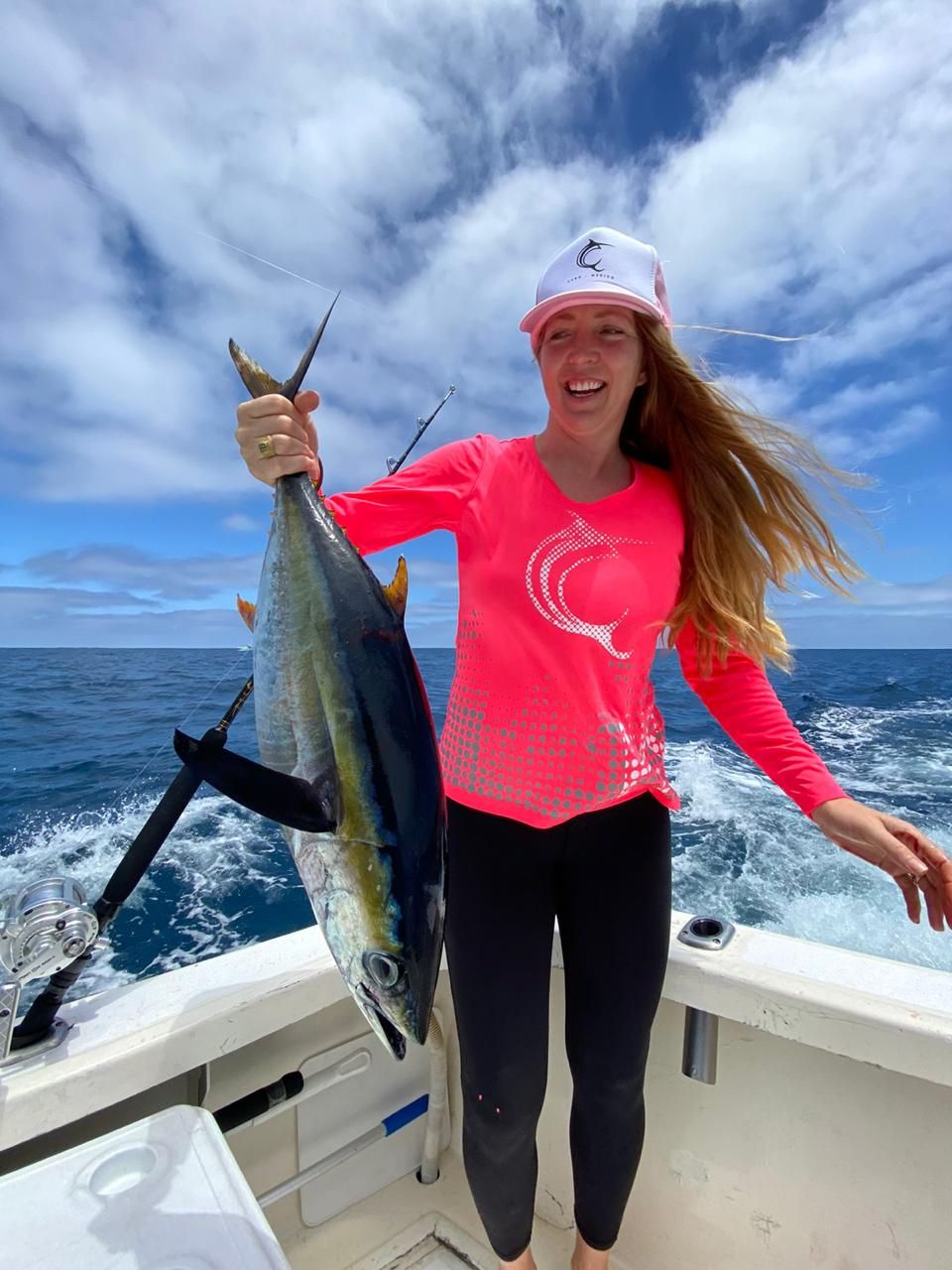 Nice Yellowfin caught aboard Pisces 31′ Ruthless, while “consumption fishing” (PS. New Apparel, like this Dri-fit Shirt and Hat shown here, coming soon at our NEW Online Store! Sign up for our Newsletter to be the first to know when we’re Open & receive a discounted price on your first purchase with us)

Covid restrictions are still in place with things getting “closer to normal” June 16th when more activities, such as “non-essential” business will be allowed to open us, which includes us! We will have our offices open to the public on Monday (June 15th) and hoping that all will go smoothly to have boats out by the next day. Now, the fact that Cabo is reopening doesn’t mean that everything will be  just as it was before. The Governor has instated strict rules about the capacity allowed onboard vessels, at beaches, inside restaurants and stores, etc. Of course, we will keep you up to date with any changes and as things ease up even more.

We are working hard and following all government mandates, including these strict new protocols and procedures. All Pisces Staff have undergone extensive training and have been certified by the IMSS, COEPRIS and Proteccion Civil, as well as API and Port Captain, meeting the highest standard for health safety. We are also in the process of completing the certification for “Punto Limpio”  (Clean Area) of all our Pisces group Divisions, which “Captain Tony’s” Restaurant has already been awarded. The “Punto Limpio” Certification is given by the SETUES (Ministry of Tourism, Economy and Sustainability) to those businesses that have good hygiene and sanitization practices.

Not only this but the city of Cabo San Lucas has been the first city on the Mexican Pacific to receive the “safe Travels” Seal by the  World Travel and Tourism Council (WTTC). This is another stamp of approval for hygiene and sanitary measures. The specially designed stamp will allow travelers to recognize governments and companies around the world which have adopted health and hygiene global standardized protocols – so consumers can experience ‘Safe Travels’. 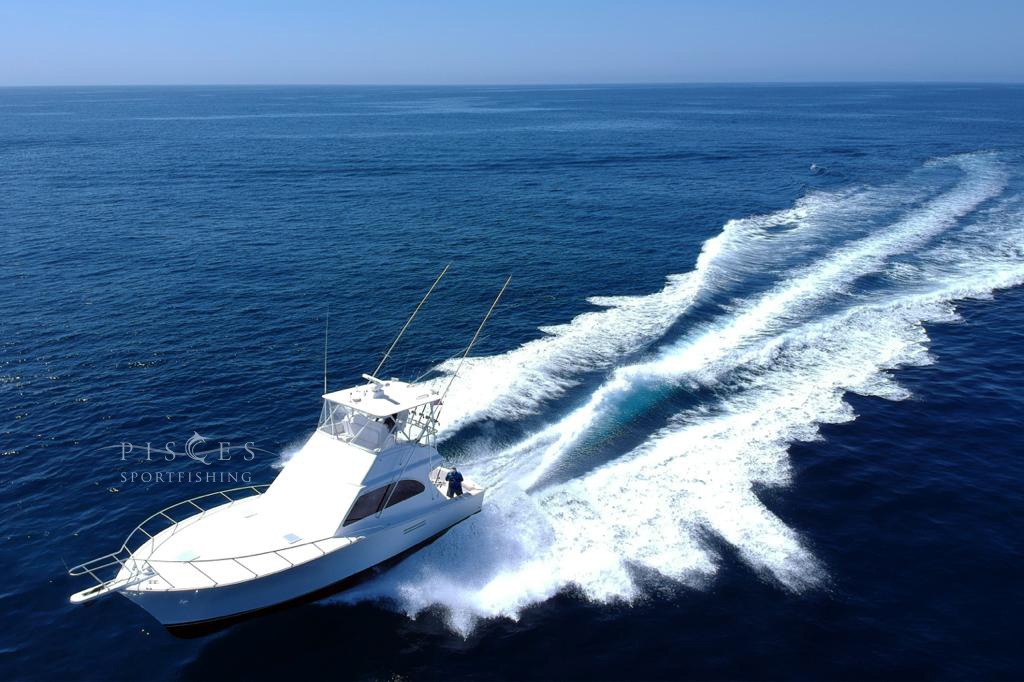 The beautiful new addition to our fleet the 42′ Post “Sea Se?ora” will be available soon!

Baja California Sur Governor Carlos Mendoza Davis said “it is an honor to include our state in the list of destinations with the [travel seal]. We strongly support protocols for the health care of travelers, it is our main commitment.”  The governor concluded, “BCS has a responsible tourist activity, those who visit us can have the peace of mind that they will be as cared for as in their homes.”

Now for the fishing. At this moment, fishing is still allowed for consumption only and we have had very few boats going out.

The most productive fishing this week has been for Roosterfish and Striped Marlin mostly, with all fishing concentrated in the Sea of Cortez from San Jose to Destiladeras and beyond. 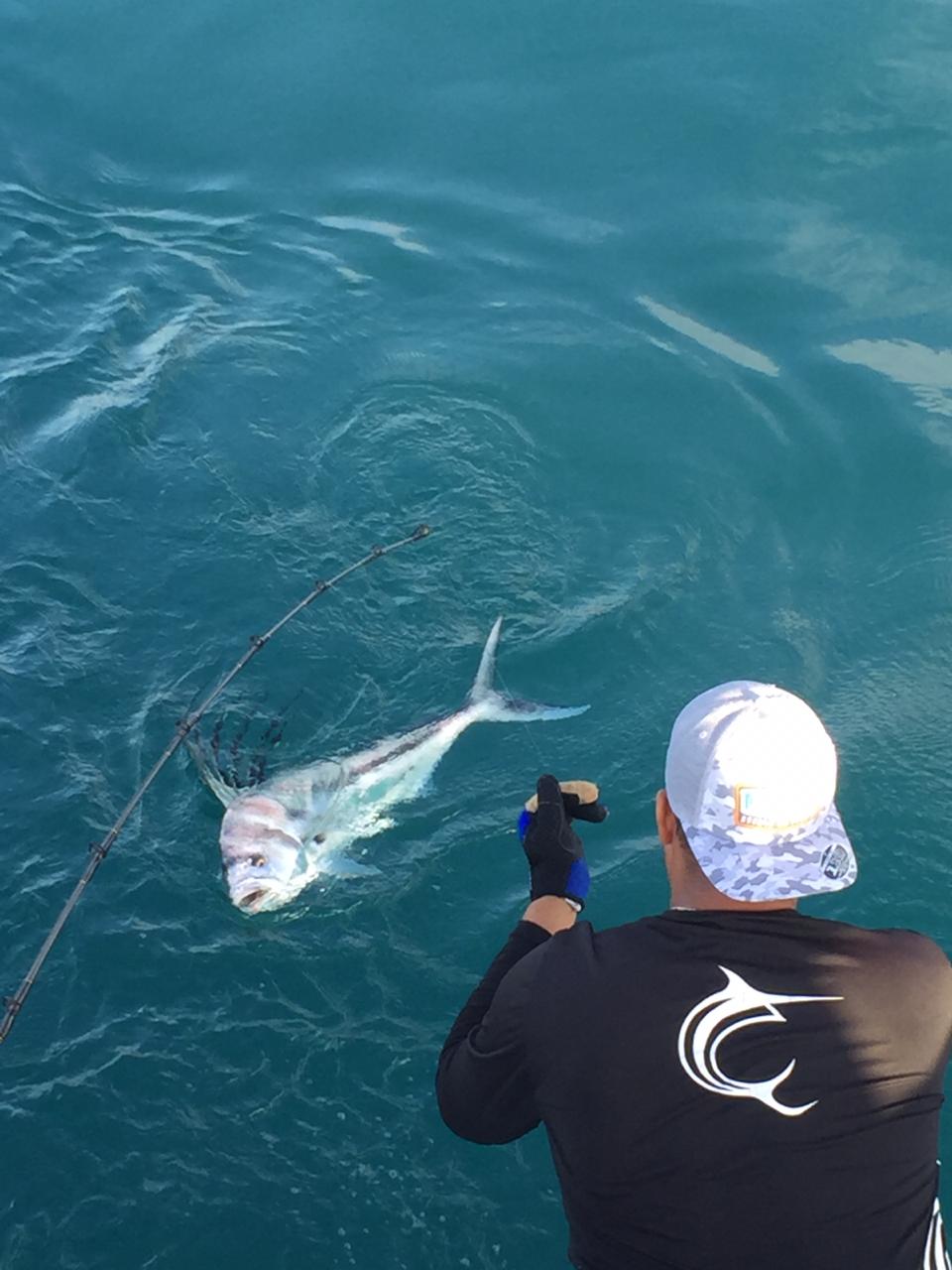 This week the new addition to our fleet, the Pisces 42′ Post “Sea Se?ora” headed out of Puerto Los Cabos marina and fished in front of Palmilla point for a few hours only, but went 4 for 6 on Roosterfish released and 3 for 5 on Striped Marlin. Owners Rebecca and Frank were aboard, and mentioned the weather was beautiful, and water temperature at 75 F. 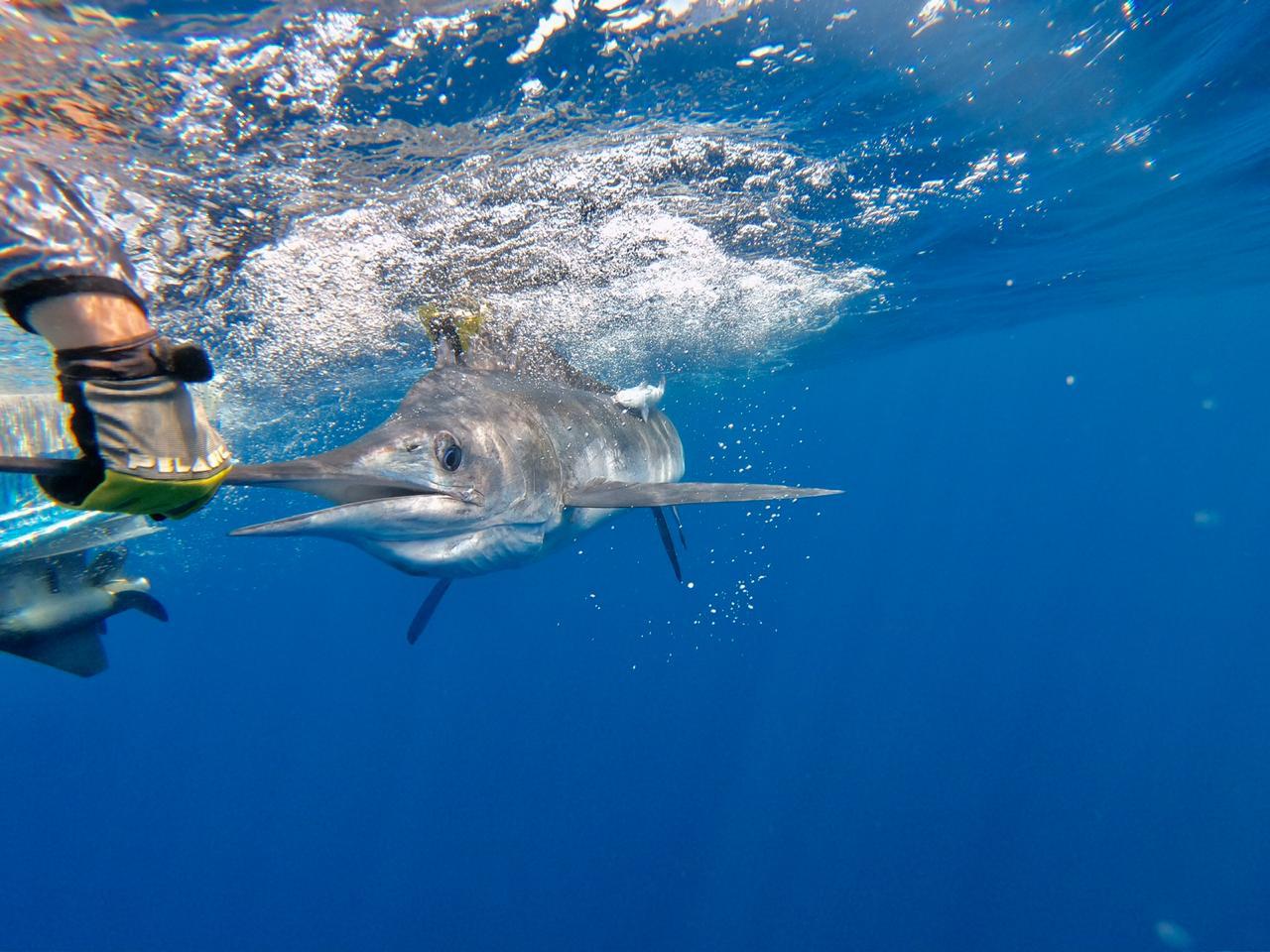 Another boat, private, the Cabo 38′ “Shock & Awe” fished from Buenavista to San Jose and saw many Marlin, releasing 2 on the fly, along with 4 Roosterfish. (Info and images provided by Mate Ronaldo Castro of the 35′ Bill Collector 2, who was aboard).

The reports of sightings of hundreds of Striped Marlin continue, with the 61′ Pour Decisions reporting 54 Striped Marlin released on their way to Buenavista from San Jose, on the Sea of Cortez side over the past two days. Lots of mackerel bait in the area as well. The water on the East Cape has been a nice blue color, between 78-79 F, with no wind. 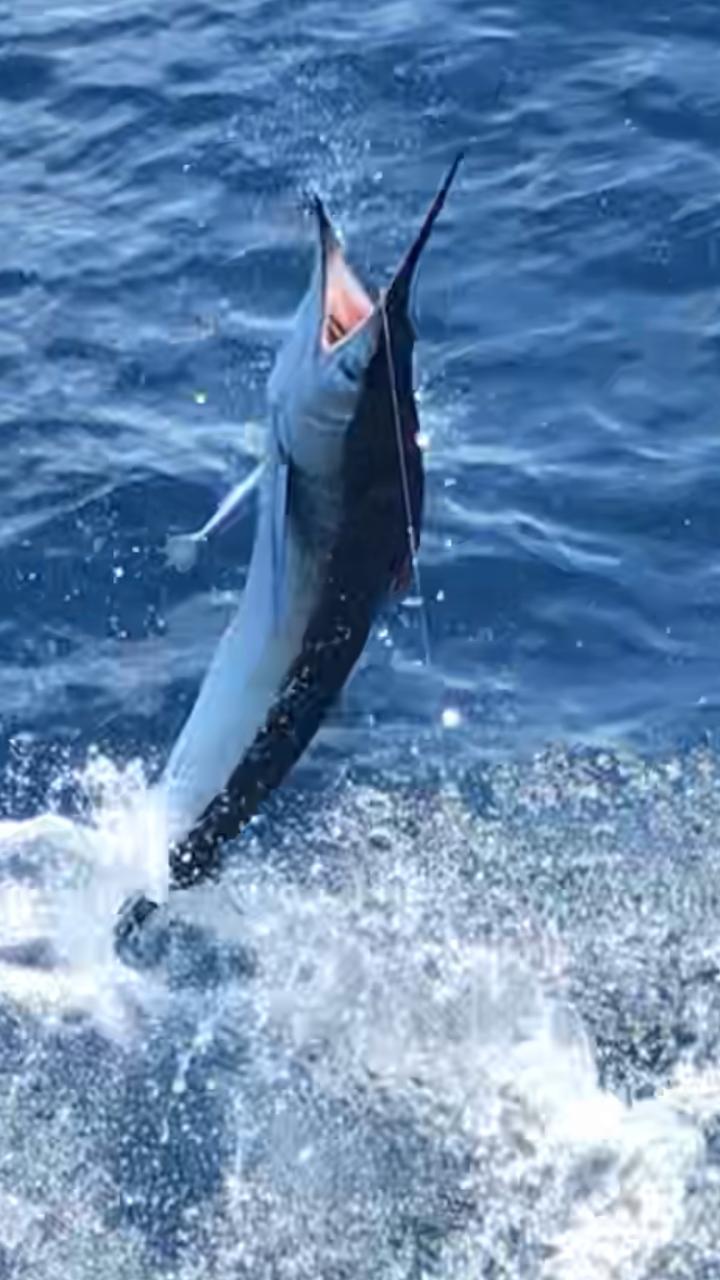 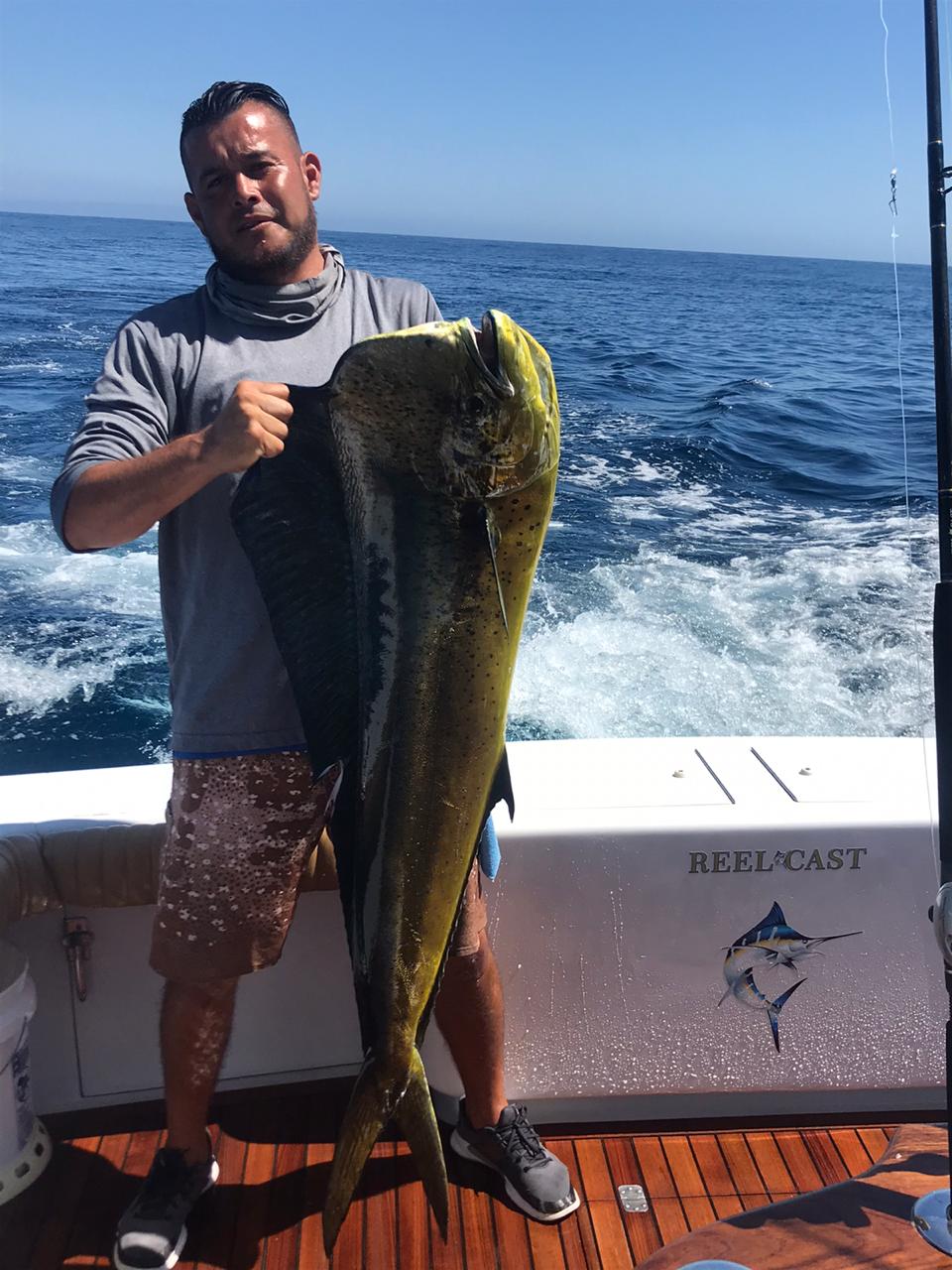 The Marlin at the Punta Gorda and Destiladeras areas also continue, where last week we had the beautiful custom 38′ Reel Cast (coming very soon to the fleet!) have 48 Striped Marlin over two days. Dorado is scarce with only a few reported and in small size. Although Reel Cast did have a nice 35 lbs Bull Dorado too. Some Grouper and Snapper still around in good size. 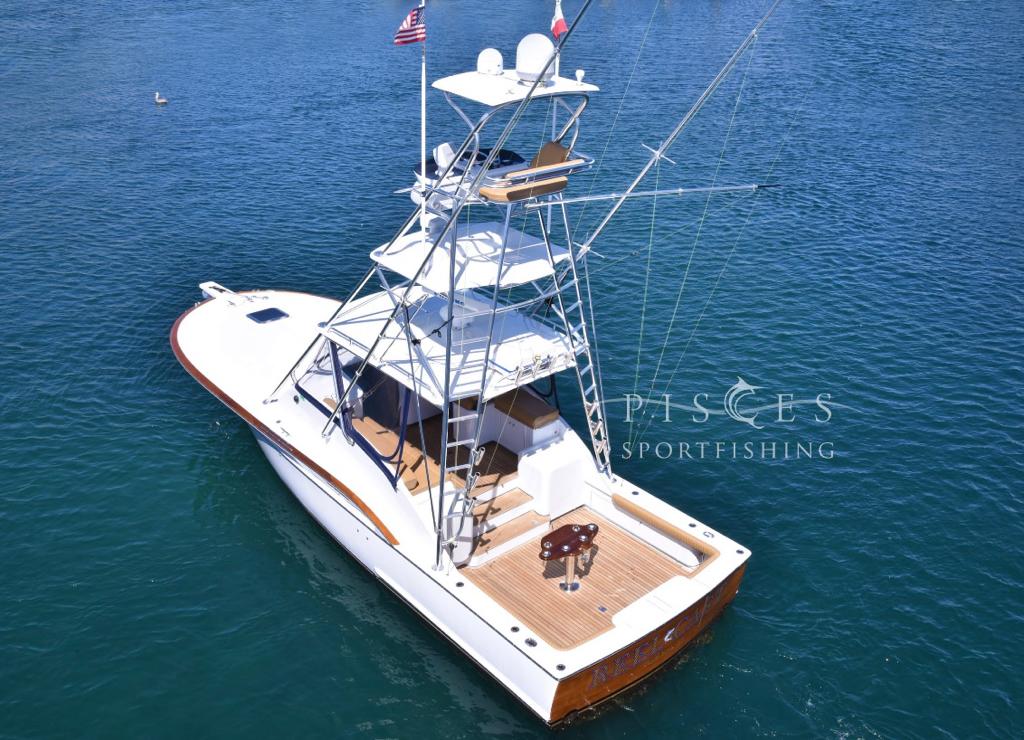 The port remains closed to Sportfishing (charters) and all boats mentioned in this report were with owners aboard or for consumption fishing only. The port captain has imposed restrictions for the past two weeks on consumption fishing also though, closing the port because of winds on the Pacific. This, as mentioned above, will be opening up to charters again, slowly, come June 16th.

In the previous weeks/months (April – May) we have seen crazy fish action here in the marina in Cabo.

Hundreds if not thousands of fish have gathered now that the town is not bustling with boat movement and people. Marina del Rey has reported Dorado under some of their yachts, Jack Crevalle, ballyhoo bait and mackerel.

Dockmaster Mario Banaga captured some impressive video of Jack Crevalle out of Marina del Rey here in Cabo too, see below.

Apart from all the fish nearby, some of the crews have been able to head out fishing and have found Yellowfin Tuna at San Jaime. However, the wind has been picking up almost weekly since April/May on the Pacific side, making conditions a bit difficult and leading the Port Captain to close port. Still, Pisces 32′ Bill Collector and crew headed out on one day and found 15 Yellowfin all between 30 and 50 lbs. Some boats out of san Jose have had luck with Tuna as well, although not consistently. Our friend Gonzalo Castillo found a couple 100 pounders from his 25′ Center Console recently. 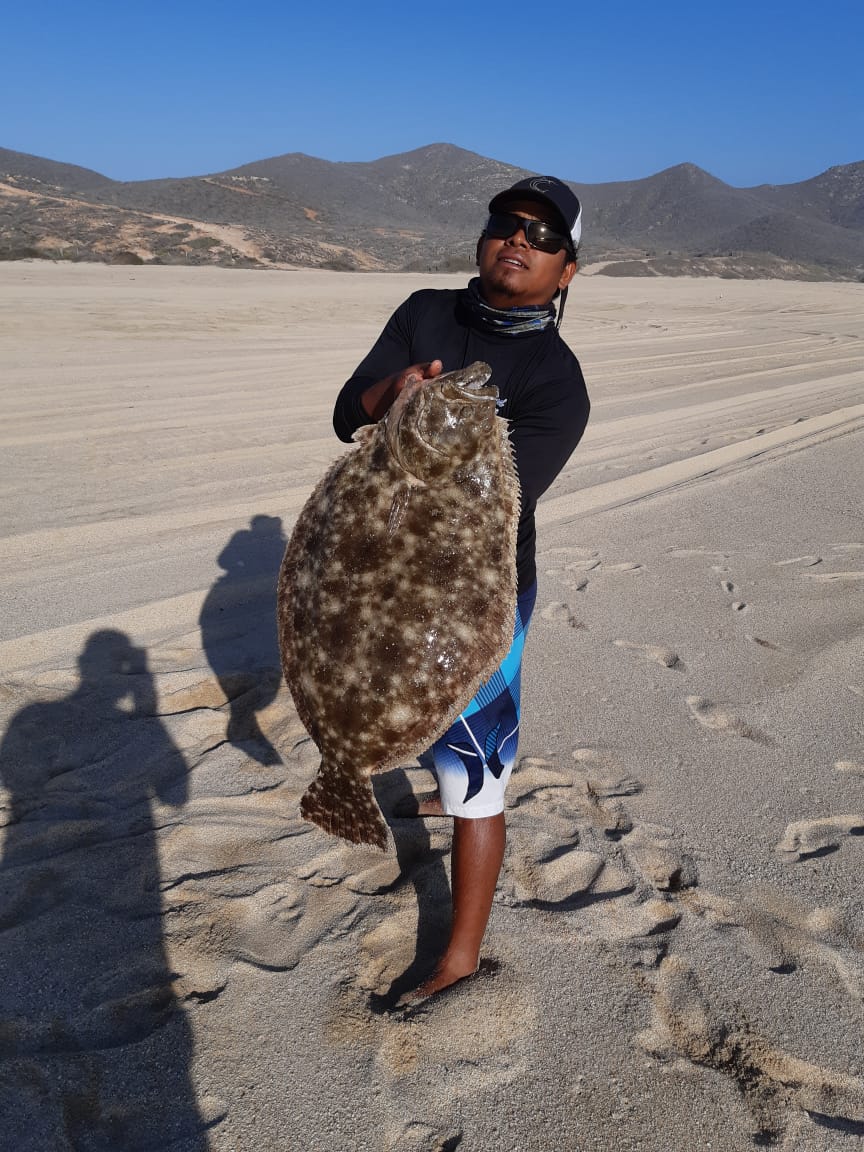 And because fishing has been restricted, many have taken to fishing from shore. Yellowtail, Pargo, and plenty of Roosterfish found mostly.

Our very own, Mate Fernando Noyola of Pisces 31′ La Brisa, caught a VERY nice specimen this week from shore, a Halibut, out of Migrino. The Halibut is the biggest he’s ever seen here, and a prized catch for him. 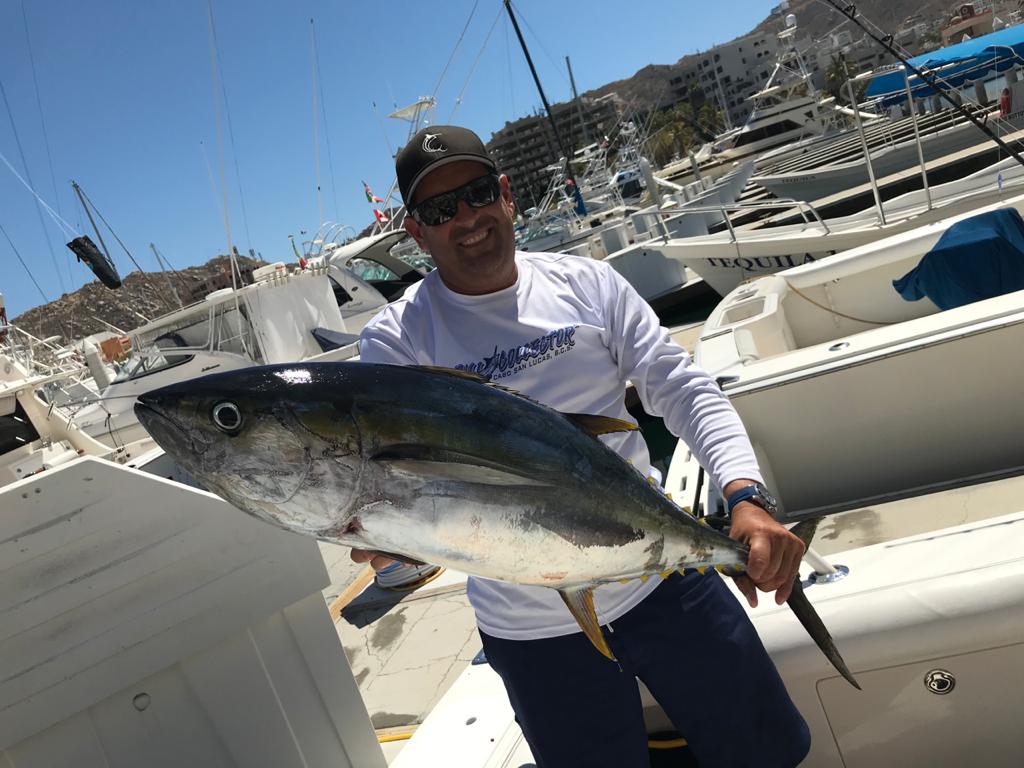 There have also been quite a few remarkable surprises, for example, the White Seabass caught from shore out of La Paz Mex by angler Ricardo Reyes. His fish weighed a whopping 88 pounds (39.9 kg) He was actually targeting Red Snapper on the Pacific, using a Shimano 60g Colt Sniper jig when this fish hit. He is now waiting on Official word by the IGFA on if his fish will be named the New World Record. The current record is about 4.5 lbs (2kg) less and has stood for 67 years! Should the catch be certified, it could set a double world record for the heaviest fish and the All-Tackle and 9-kilo-line class catch. 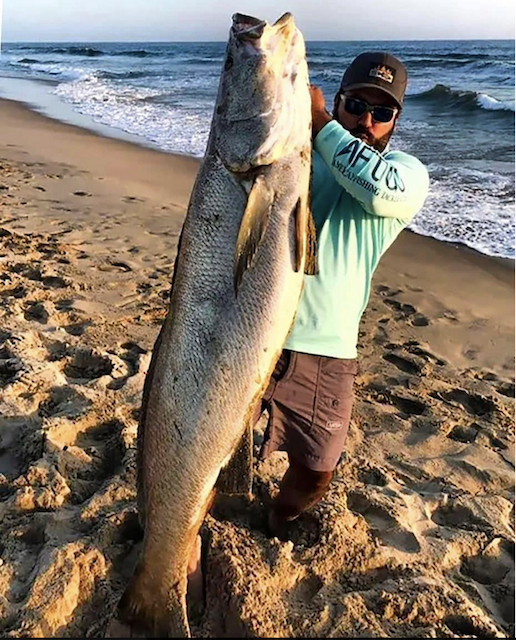 Pisces is now a Certified Official Weight Station for IGFA, and have our scale right at the Marina del Rey . If you’re looking to catch some possible records we’re thinking after this quarantine lifts may be just the time.

We can’t wait to have all our anglers and friends back in Cabo soon, and we are ready to close out this year with some positivity and most of all, great fishing!!