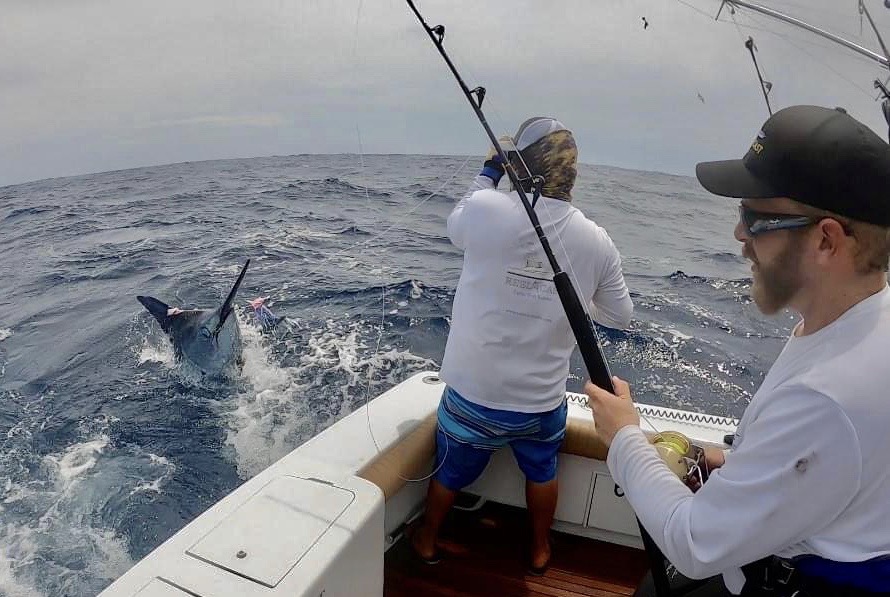 This week was closer to our typical Summer fishing season, with some inconsistency through the beginning of the week. Water temperatures changed from last week to this one (with temps on the Sea of Cortez reported of up to 88 F) and fish moved quickly. However, towards the end of this week the Dorado picked up with almost 30% of boats landing them, compared to only 5% last week. This helped pick up success rates and catches for anglers. Tuna numbers dropped slightly, but probably due to the fact that the Dorado showed up and were easier targets than heading out far for Tuna. A few more Billfish this week as well, although not in large numbers. However, Blue Marlin catches rose compared to last week, with an outstanding catch and release of an approximate 600 pounder on Pisces 37′ Reel Cast. That same day the guys also landed two Yellowfin and lost two other Blues! All in all, this weekend was one of our most impressively productive fishing days of the year so far. Just on Saturday for example, we had 81 fish caught (Catch limits respected with releases and all Billfish Released) See below! 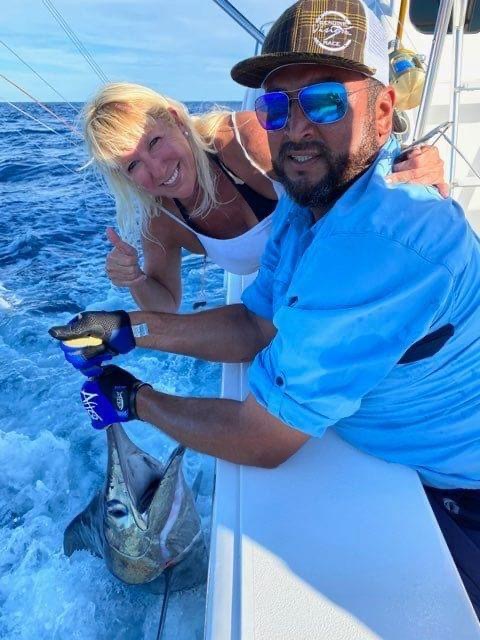 Let’s jump into our Billfish catches: The 600 pounder on Pisces 37′ Reel Cast hit on a guacamayo lure almost 40 miles out, close to the 130 Spot, where the crew had two other hits, but lost them. Then two yellowfin of about 45 lbs each for dinner.

(Note: Gaff that appears in video is in the Top Rod Holder where Captain is filing from, this fish as safely released)

Pisces 40′ Chasin Tail 2 released one Blue yesterday, of about 350 lbs, which anglers form Richmond, Texas, also tagged. And then went on to keep 4 Dorados af about 10 to 12 lbs each. 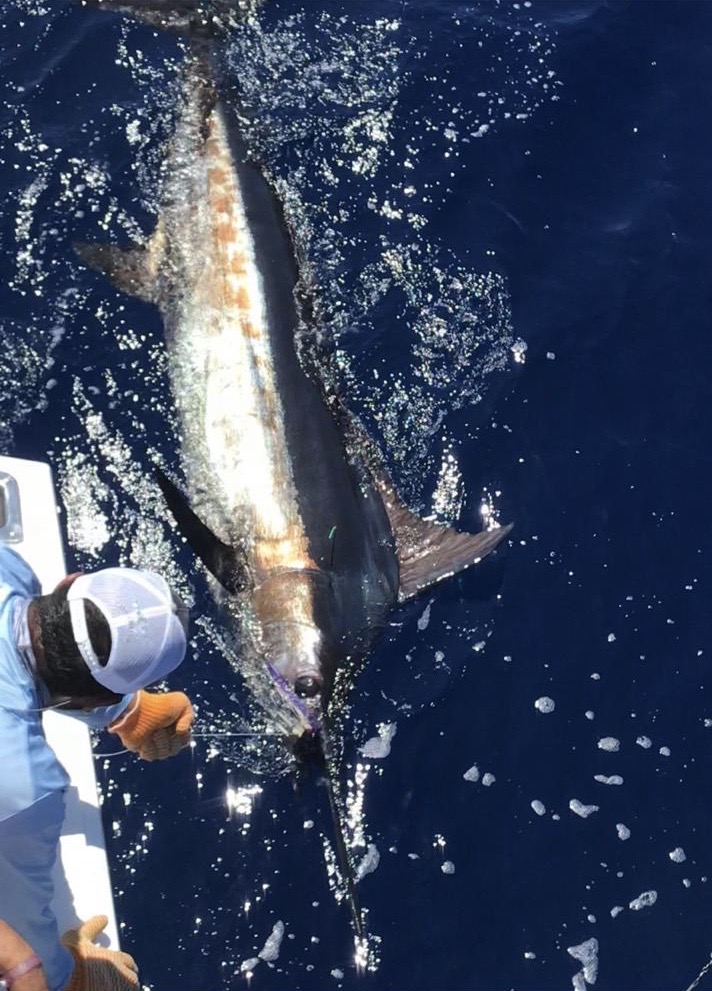 Pisces 28′ Andrea was our Top Blue Marlin boat with 2 Released in the week and also the Top Dorado Boat. Anglers Aaron and Chris Lickteig released their Blue of about 320 lbs with 28′ Andrea close to the 180 Spot, hitting on dead caballito bait. They also released a Striped Marlin of about 100 lbs and kept one 40 lbs Yellowfin.

Anglers Christa Baker and Turner Green released a 220 lbs Blue with the  28′ Andrea, which hit on a green/yellow lure near San Jaime, plus a 50 lbs Yellowfin too. 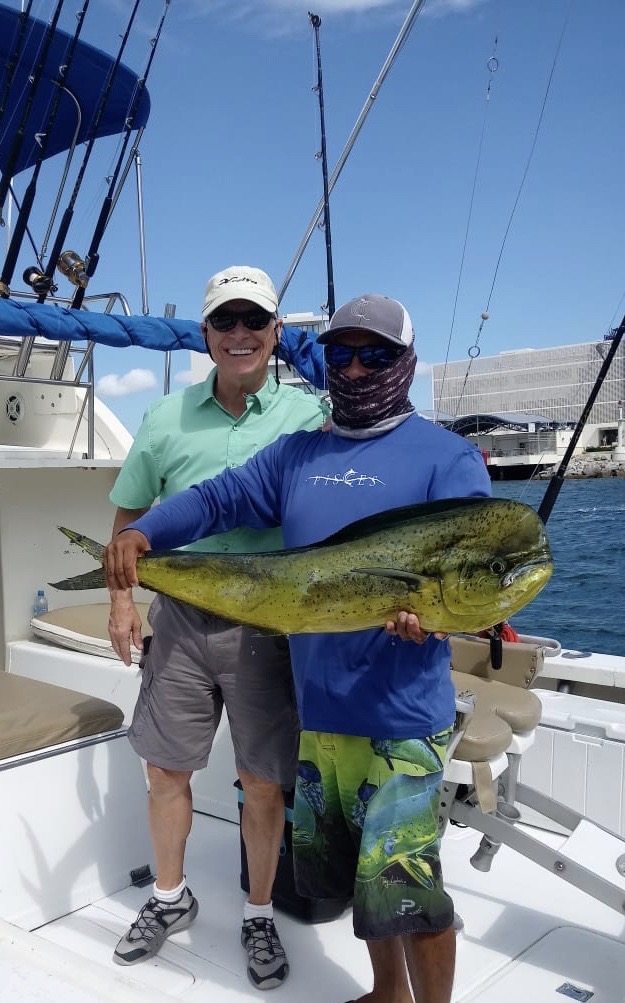 Their best Dorado day earned them top boat in this category, with an impressive 16 Dorado caught yesterday (10 released!) close to Migrino for angler Harold Allen from Riverside, CA. He also landed a Wahoo of about 30 lbs, that hit on feather lure. (Below) 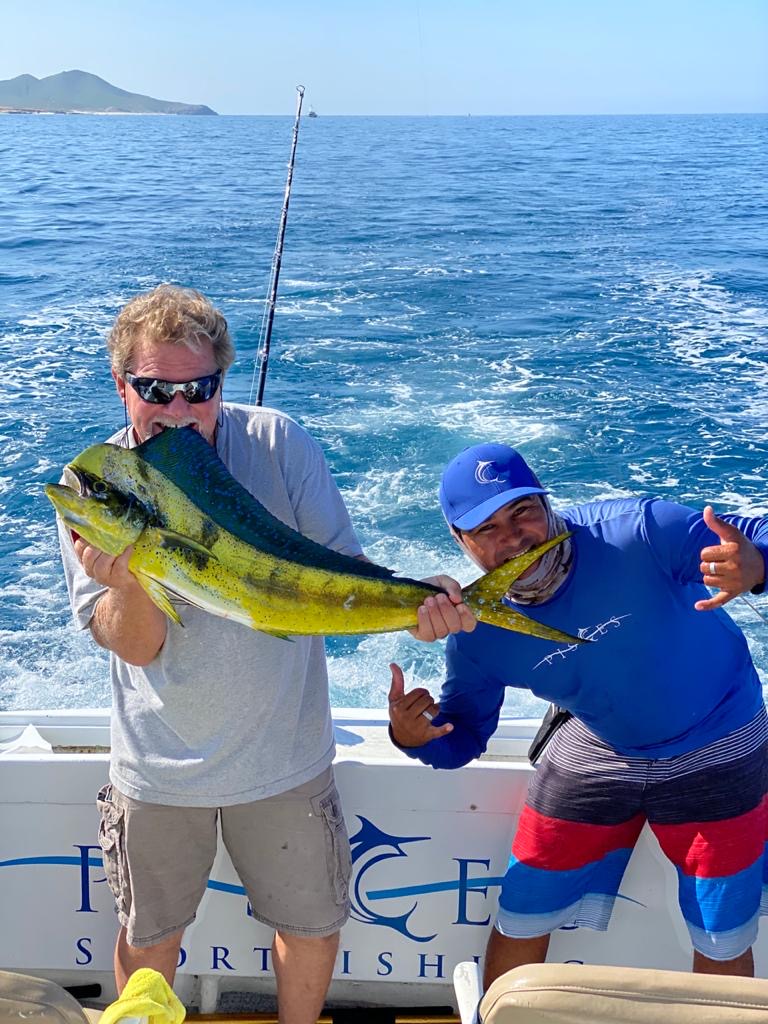 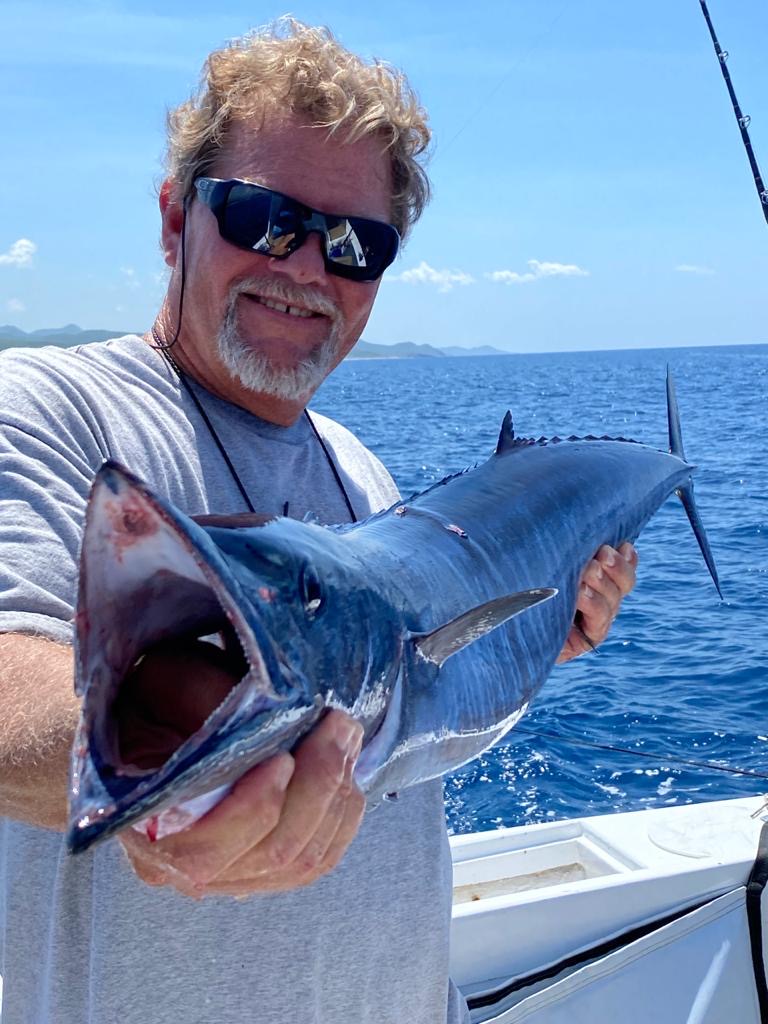 The day Prior Pisces 31′ Ruthless anglers Jim Huson, Scott Buck and Tom Collins had landed 10 Dorado before 10 am (releasing 3) before heading back to port for an early lunch! 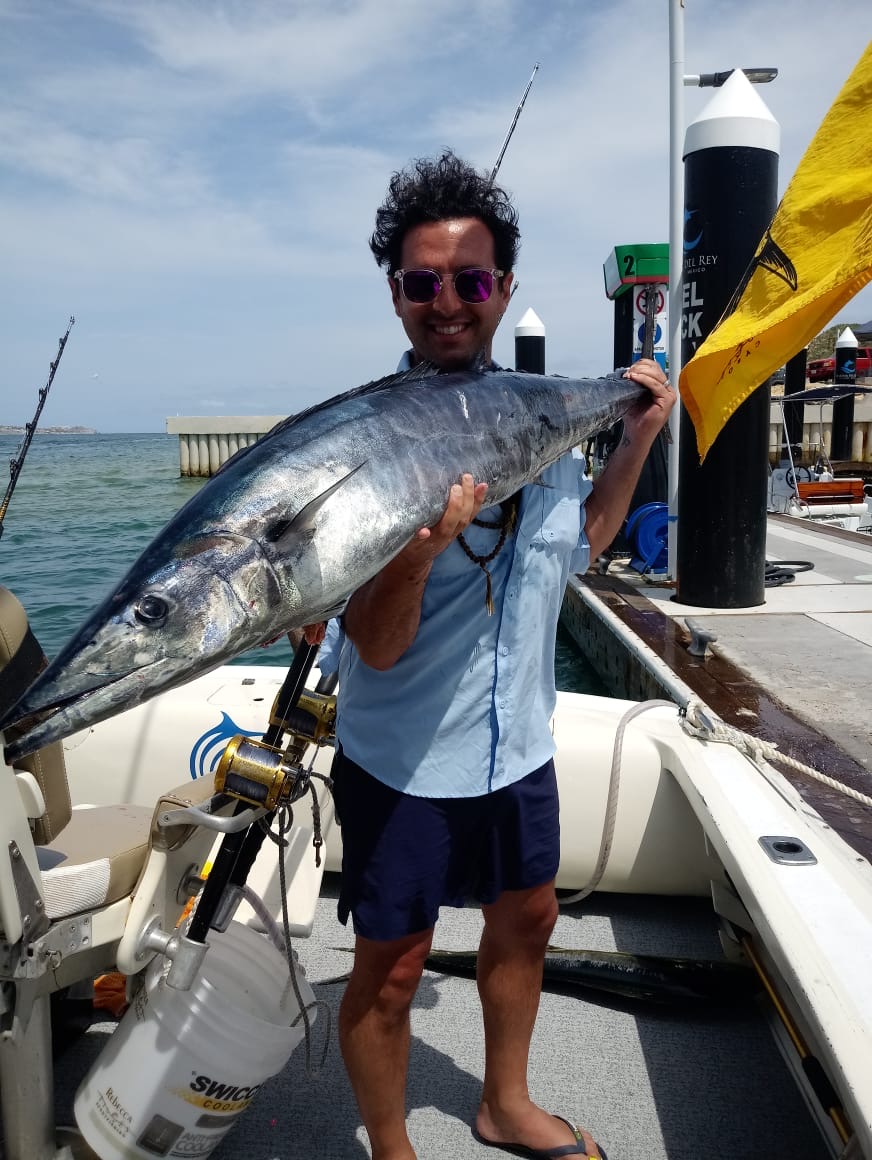 Pisces 31′ Rebecca also landed a nice Wahoo this week, caught by anglers Adam and Tiffany Shindler. The Wahoo neared 40 lbs, caught close to Punta Gorda on the Cortez side. They also caught 2 Dorado of about 25 and 10 lbs each. The 31′ Rebecca was also of the few to land Striped Marlin, with a great day on Saturday for anglers Kevin and John McCarty and Kevin Young. They released a Striped Marlin of about 150 lbs and landed 9 Dorado (releasing 3) for the McCarty family from Texas. They also kept a nice Sierra Mackerel that hit on rapala close to Migrino. 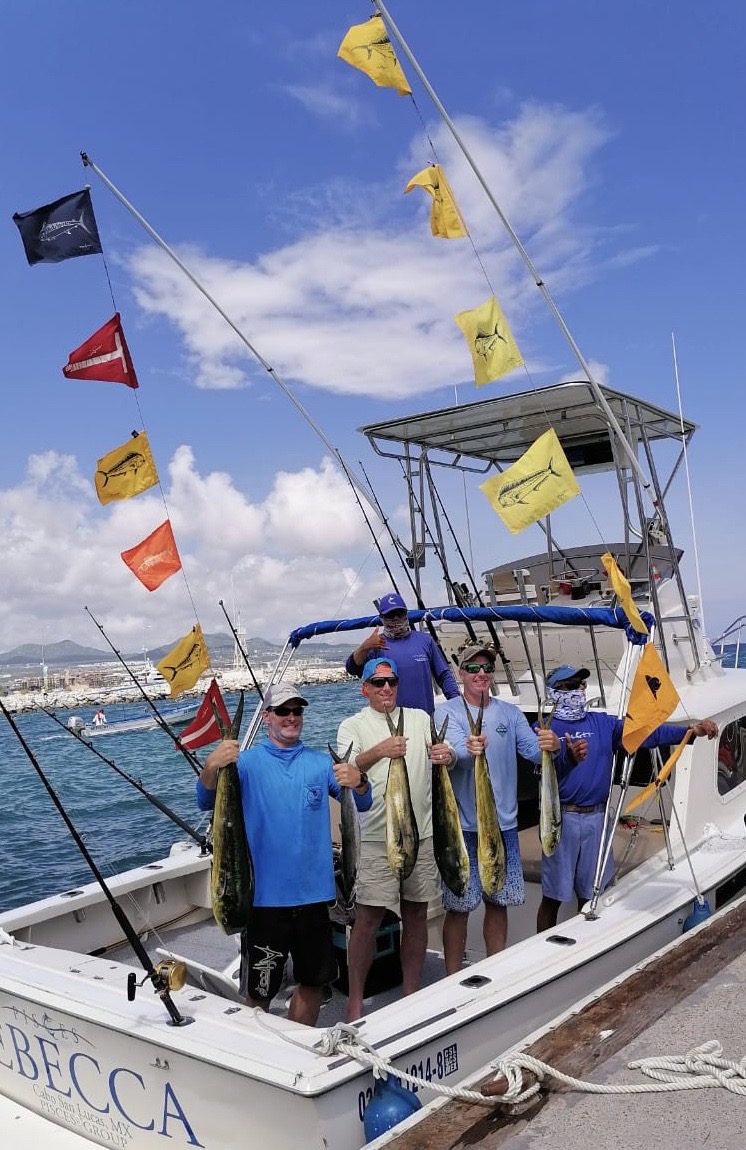 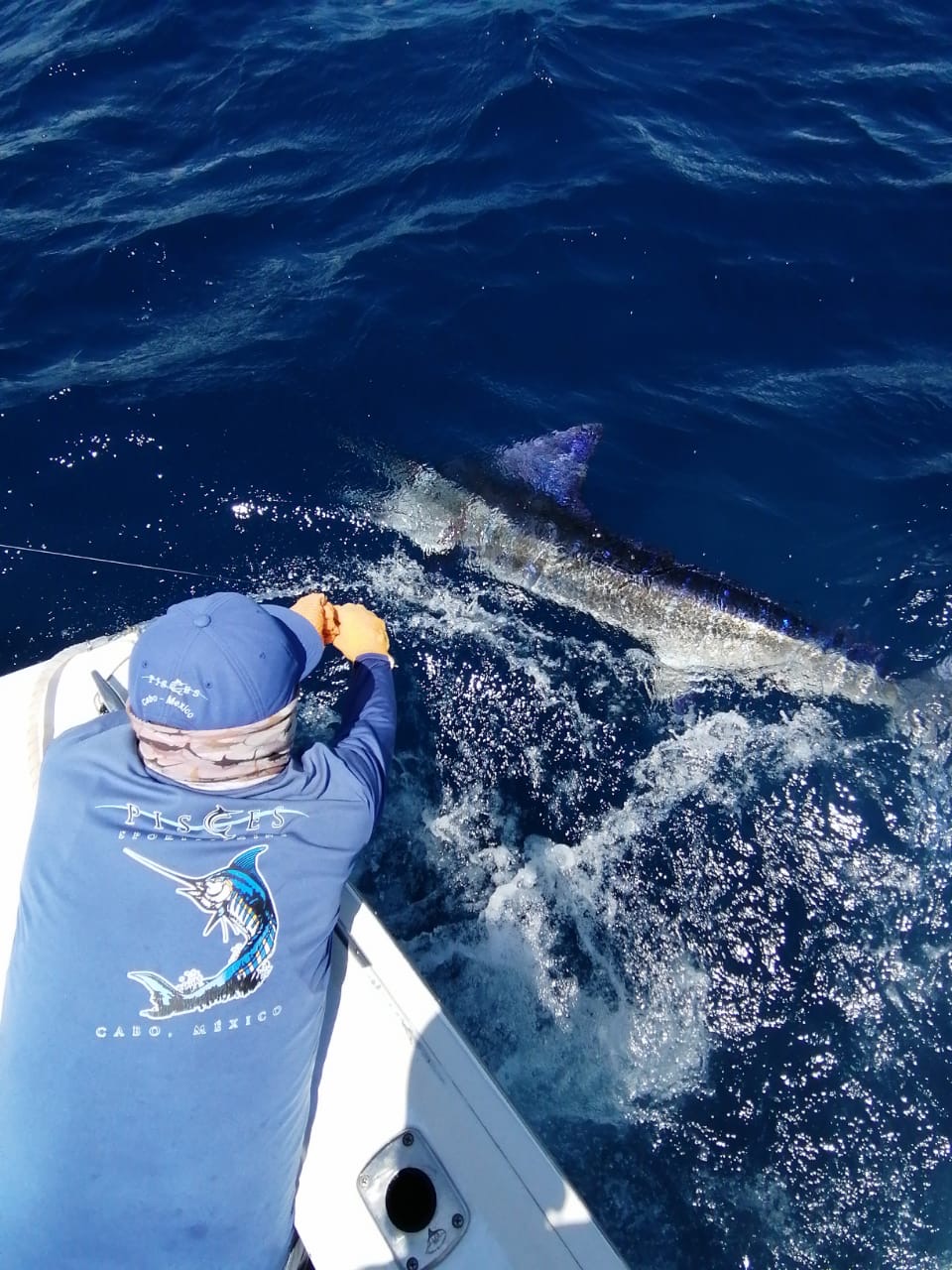 Pisces 42′ Yahoo was Top Billfish boat, for most released in one day. Early on in the week they headed to Punta Gorda area and released 3 Striped Marlin between 100 and 130 lbs each, which hit on live caballito and ballyhoo. Anglers also released a Sailfish of about 80 lbs on ballyhoo and kept 3 Yellowfin of about 25 lbs each. They closed out the week by landing 9 Dorado this Saturday.

Pisces 37′ BBII did well with Striped Marlin, with 2 released and some decent 2 Yellowfin of about 80 lbs each for the sweetest father and son anglers, the Moreno family form Texas. 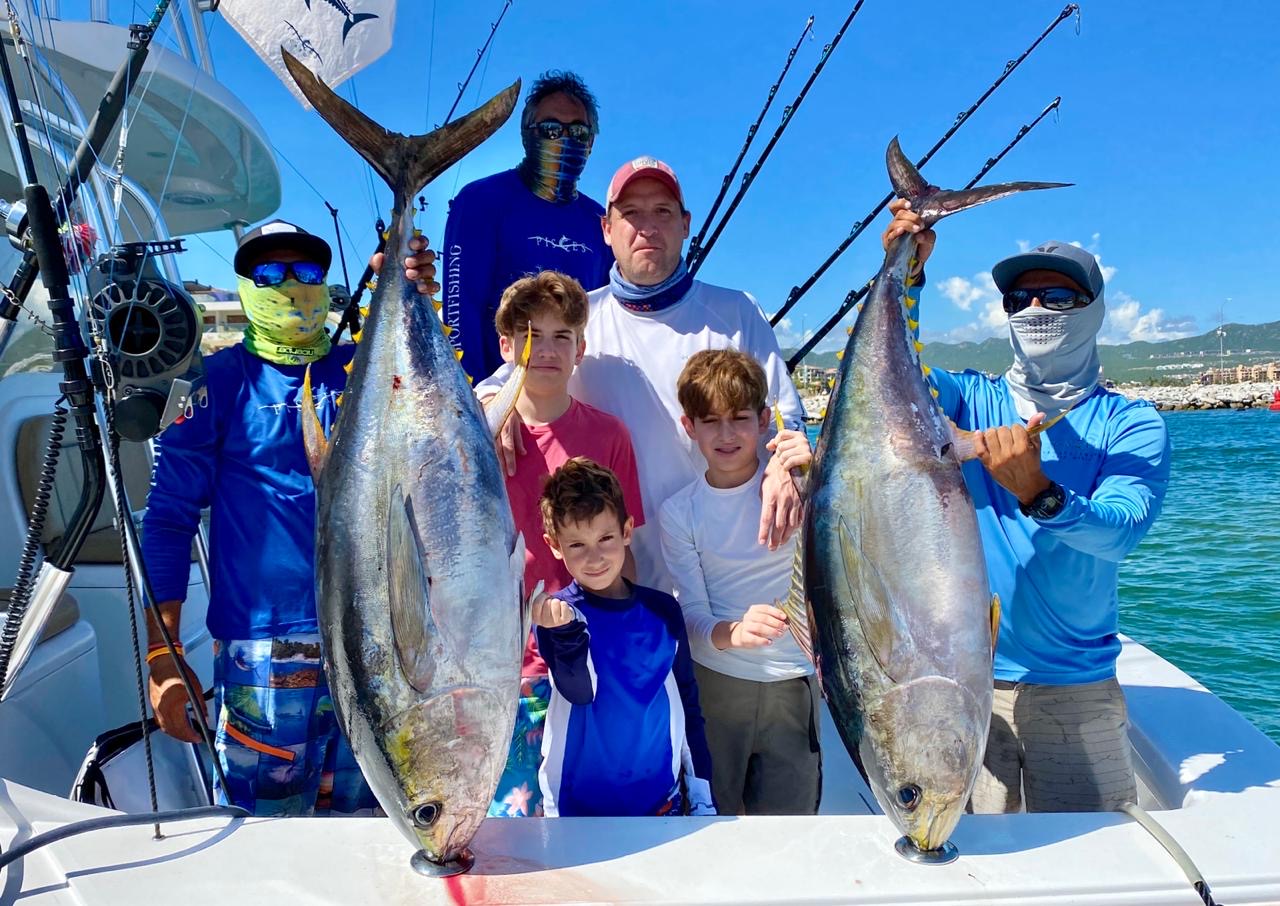 Pisces 35′ Knot Workin’ also released a Striped this day, which hit on dead bait towards the 180 Spot, followed by a 75 lbs Yellowfin landed by Ellen McCarty. (Below) 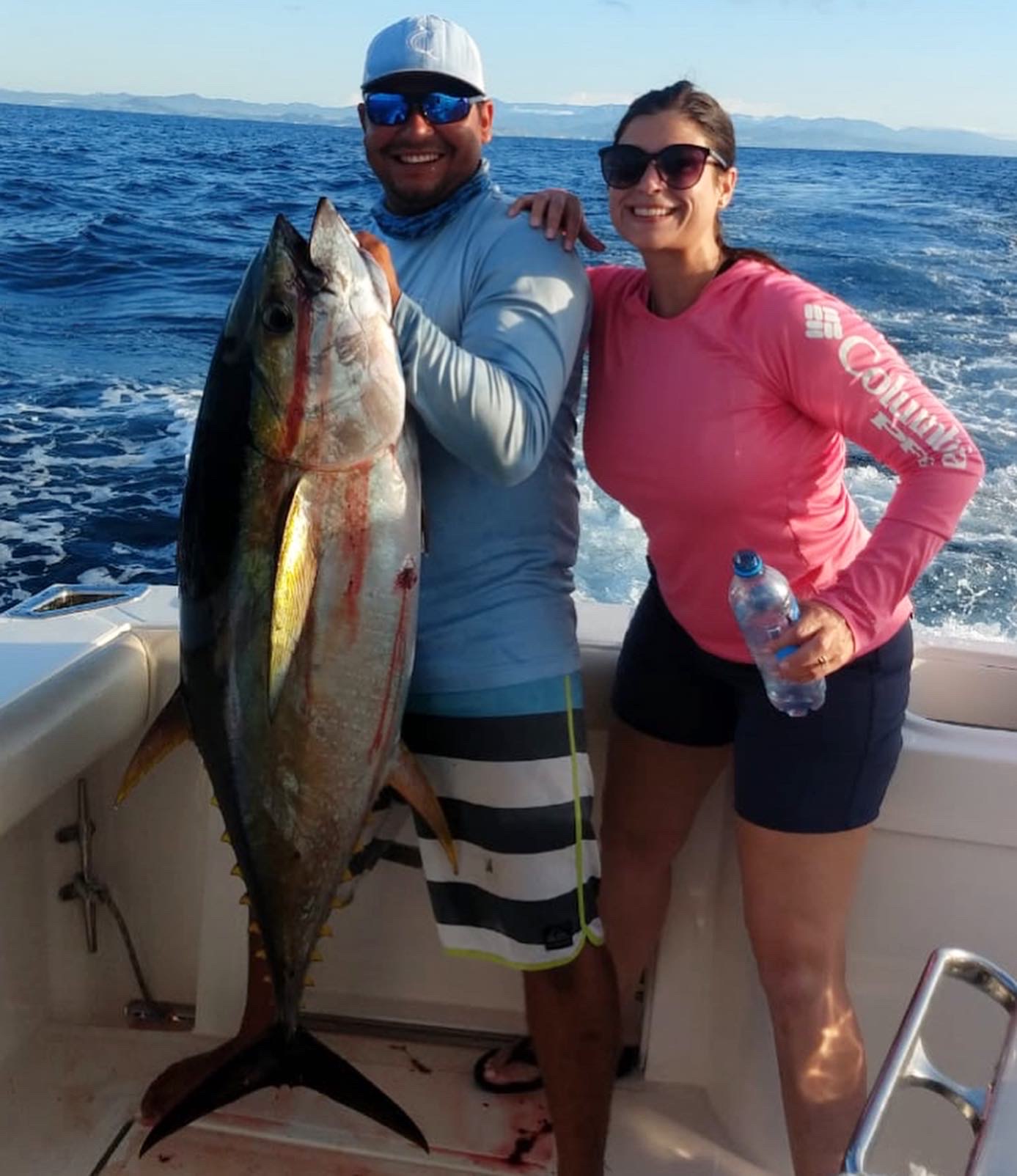 Similarly, Pisces 58′ Dona Homa, released 1 Striped Marlin of about 150 lbs and kept 4 Dorado between 10 and 15 lbs, these close to Las Margaritas area.

Other catches this week included Amberjack, 4 caught on Pisces 31′ La Brisa, along with 3 Dorado at Golden Gate that same day.  Plus, 1 Sailfish released by anglers Jim Huson, Scott Buck and Tom Collings from Indiana.

This same day, Pisces 45′ Chasin Tail released 1 Sailfish of about 100 lbs at Migrino. Released 3 Skipjacks and kept 1 Sierra Mackerel and 4 Dorado between 10 and 20 lbs. 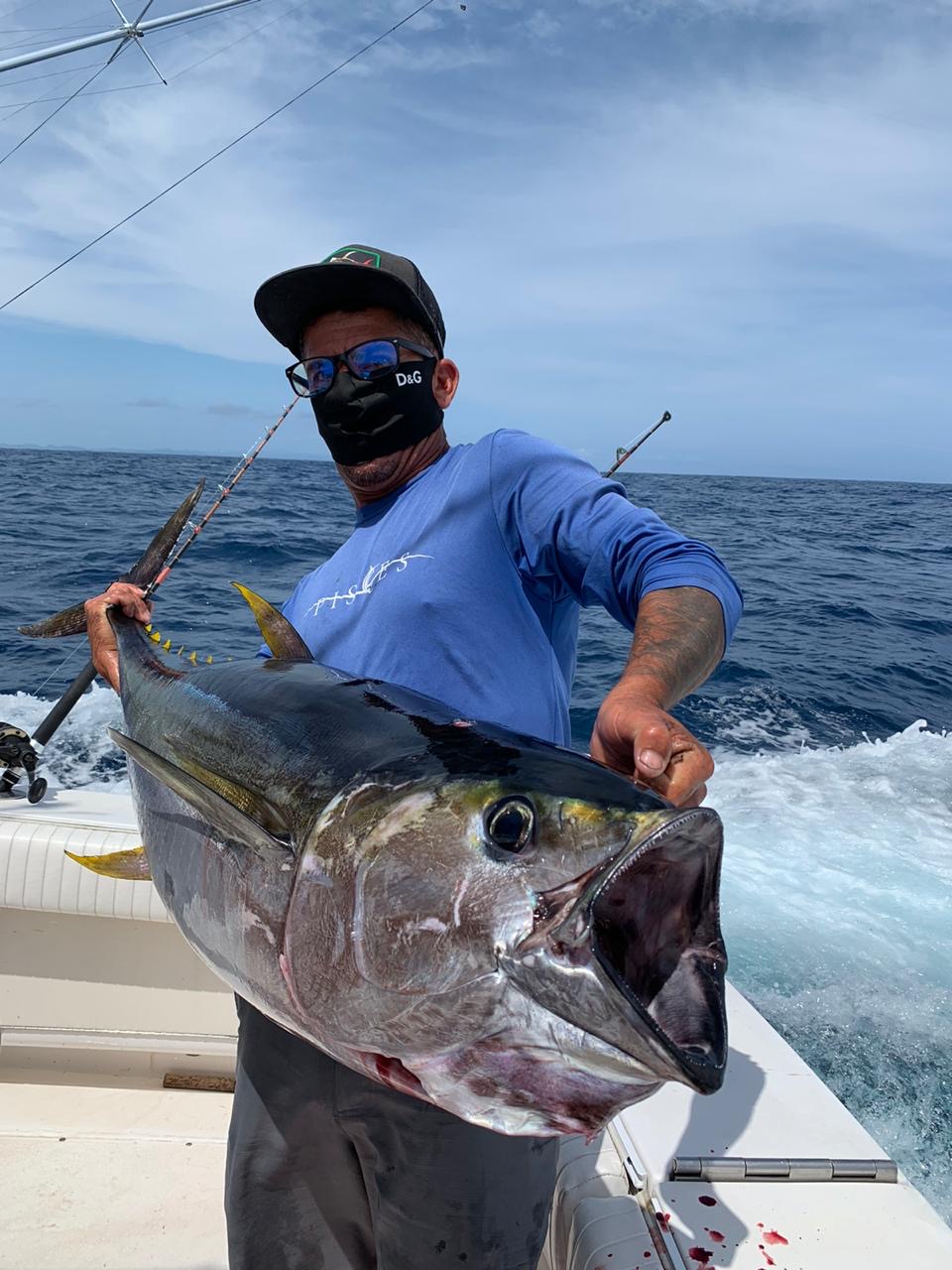 And although I wish I could include everyone. I’ll end here, last but not least, Pisces 38′ C Rod had a great week with a nice 50lbs Spearfish that hit on a green lure (unusual catch for Cabo), which they released. Plus, 4 Yellowfin Tuna of about 50 lbs each at almost 40 miles out. They were our Top Tuna Boat this week, with their best day landing 19 Yellowfin between 20 and 40 lbs each for anglers from Salt Lake City, Utah.