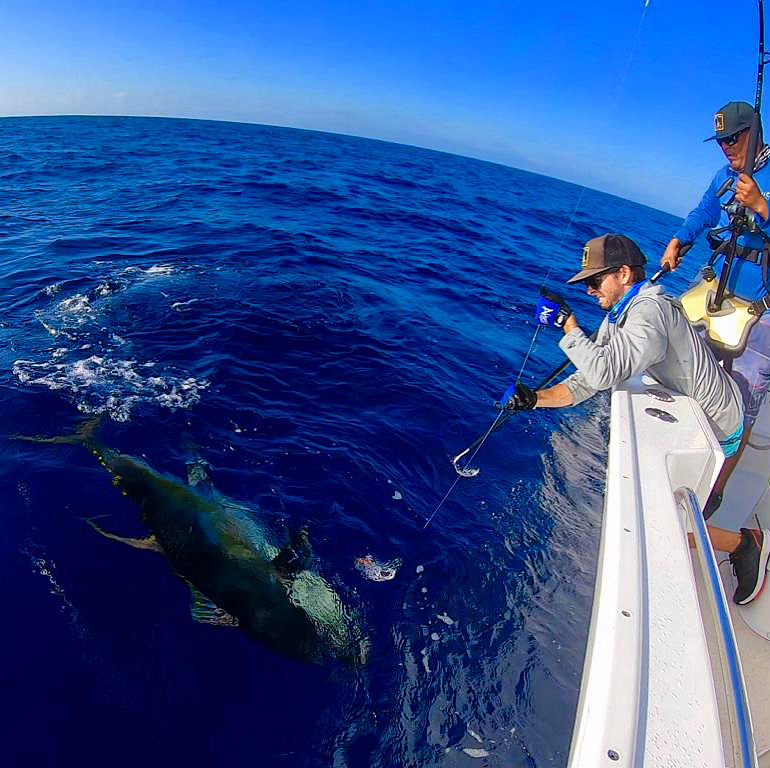 This week saw the “Super Bowl of Sportfishing”, the 39th Bisbees Black & Blue Tournament, come and go with a total pot of just over $4 Million dollars. The three top teams took a check of over a million dollars each. Our Pisces 35′ Knot Workin’ with an all-local crew, headed by Captain Tito Oloascoaga and anglers also made it to the scales, weighing a 370 pound Blue Marlin. They missed out on the monies, as one heavier fish got in between them, and they ended up taking 6th place in the tournament. You can see the full winners list and earnings by clicking HERE. The numbers for catches this week were very good once again, with over 90% of boats catching fish. There were 200 Billfish caught and released, 145 Dorado, many of which were released to respect catch limits, and quite a few Wahoo nearing 40 to 50 lbs too. And although Yellowfin tuna were targeted by only 20% of boats, there were 134 fish caught with many of those tuna weighing between 100 and 200 lbs! 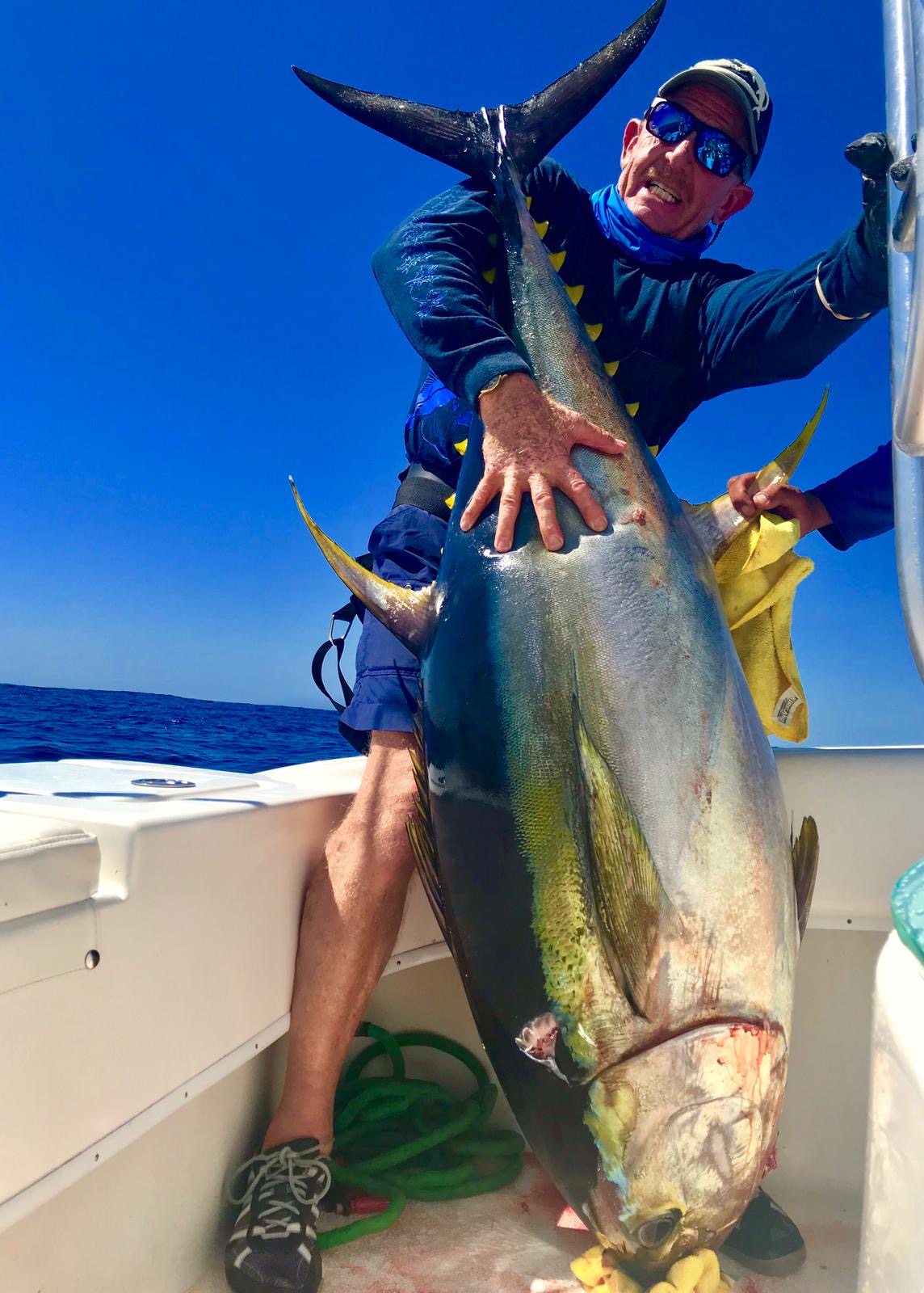 The most notable tuna slayer this week was Pisces 25′ No Borders with not one, or two but FIVE yellowfin of over 100 lbs; the biggest weighing in at 210 lbs, all in only 4 fishing days. This boat is already taken for the WON Los Cabos Tuna Jackpot, which is looking to have about 180 boats entered, including our WHOLE fleet, and close to a $1 Million dollar pot. However, No Borders is still available for the Pelagic Rockstar Tuna Tournament beginning Nov 1-3rd. Pisces 40′ Chasin’ Tail  is also available, whose Captain, Pepe de La Pena, was part of the crew aboard “El Suertudo” when landing the Current All-Tackle World Record Yellowfin Tuna, a 427 pounder, caught by angler Guy Yocom (See Video here: World Record Tuna). With a low entry fee and good odds, these two vessels might just be the boats and tourney to try your luck on before Tourney season ends. 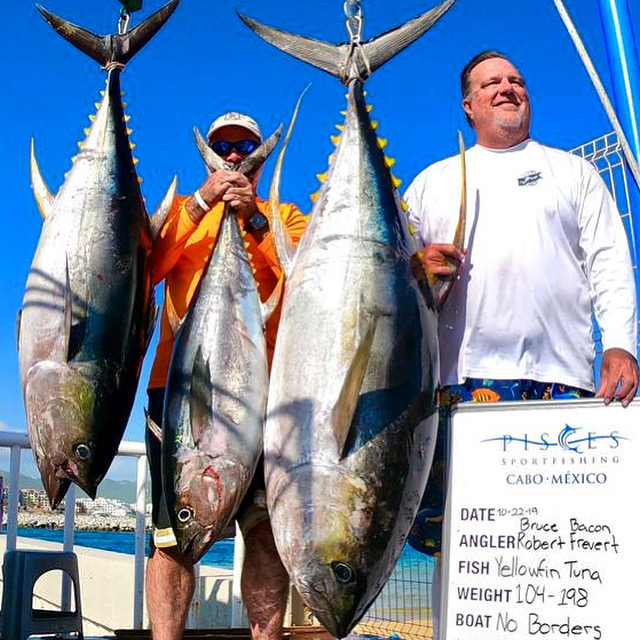 Now, back to Pisces 25′ No Borders which has made their day’s count, with Captain Ryan Caughren landing a nice 210 lbs yellowfin tuna on October 22nd, hitting a purple/pink lure. The next day Anglers Bob Frevert and Bruce Bacon from Michigan landed 3 Yellowfin, with the smallest weighing 50 lbs, while the other two were 104lbs and 198 lbs. October 24th, anglers caught about a half-dozen 20 to 45 pounders, a 60 lbs yellowfin and an 144 pounder. Lastly, October 25th, anglers Alexandre Villamil, Ismael Flores, Jason Villegas and Steven Lambert caught two yellowfin, one of 45lbs and the other 128 lbs. They also released a nice 110 lbs Striped Marlin that hit on dead bait. 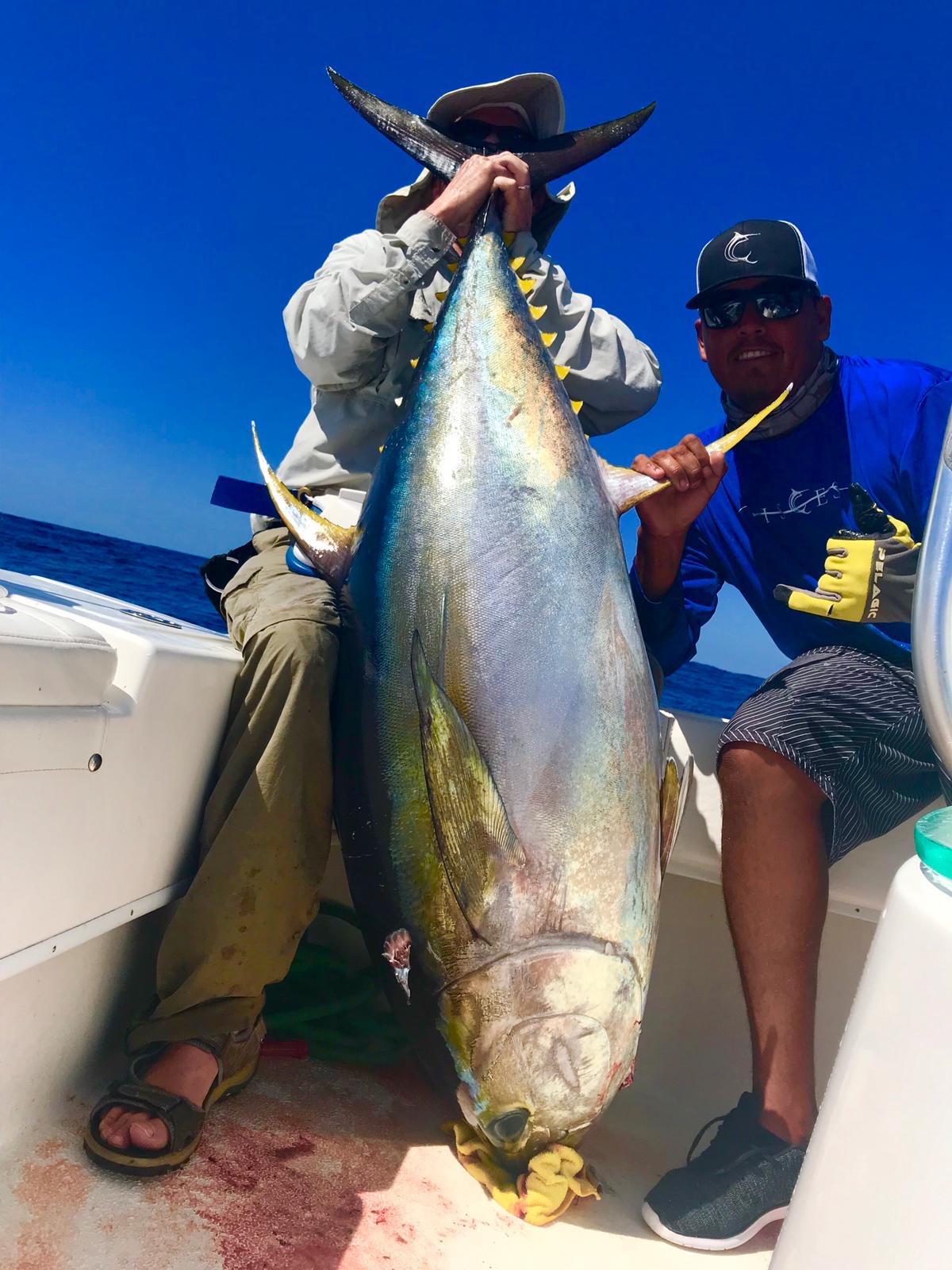 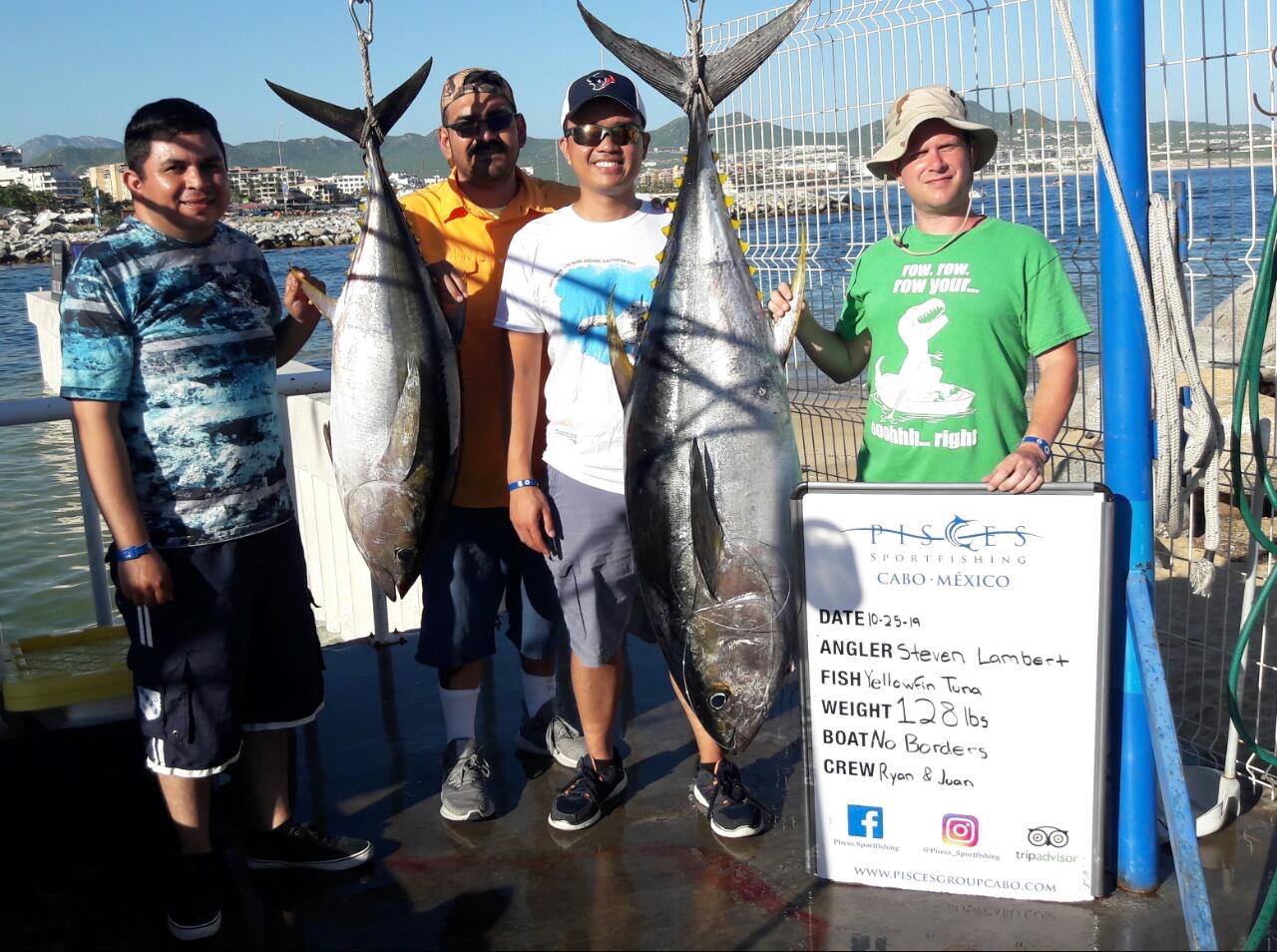 Pisces 30′ Karina was another vessel that did well with tuna this week, landing good numbers, averaging 20 to 35 lbs each fish. Blake, Cindy and Scott Kappes from Oregon did well to catch 11 yellowfin, with one approx 150 lbs Tuna breaking off after a 1 hour fight on 30# test. The large fish hit on a small Accurate reel that the angler brought with him. The Karina also did well with marlin; 5 Striped marlin released at the Old Lighthouse for anglers from Texas. The fish ranged from 100 to 130 lbs each and hit dead and live mackerel bait. The next day again, 30′ Karina released 5 Stripeys but this time at Gaspareno for anglers Daniel Schau, Darryn Edestrand, Paul Springfellow and Roger Hockett. 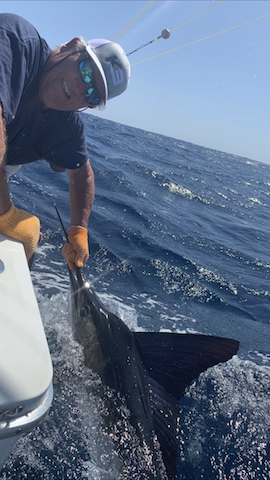 Our 31′ Bertram, Pisces La Brisa has hit the ground running after her full refit haul-out, not only looking her best, but fishing her best also. Captain Rey Winkler and Mate Fernando Noyola had a fabulous week, being one of the top billfish boats this week, with their best day releasing 7 striped marlin for anglers Chris Zebley, Jim Norris, Mike fisher and Tim Giddens at Gaspareno area. Angler Brian O’Neil fished the next day aboard La Brisa and released 4 Striped Marlin between 100- 120 lbs each on live and dead bait, and kept a nice 20 lbs dorado as well. Anglers from California fished aboard another day and released 2 striped marlin, 1 sailfish and 3 dorado all at the Old Lighthouse. And even more dorado for La Brisa when they headed to San Jaime, fishing with feather and cedar plug lures, anglers Brad and Kristen Ingram landed 10 dorado between 10 and 20 lbs each. The 31′ Bertram even managed to release a striped malrin and land 3 dorado for anglers from Washington on a half day out at Migrino area. The dorado hit on lures, green and black/red, while the marlin took mackerel bait at the Old Lighthouse. 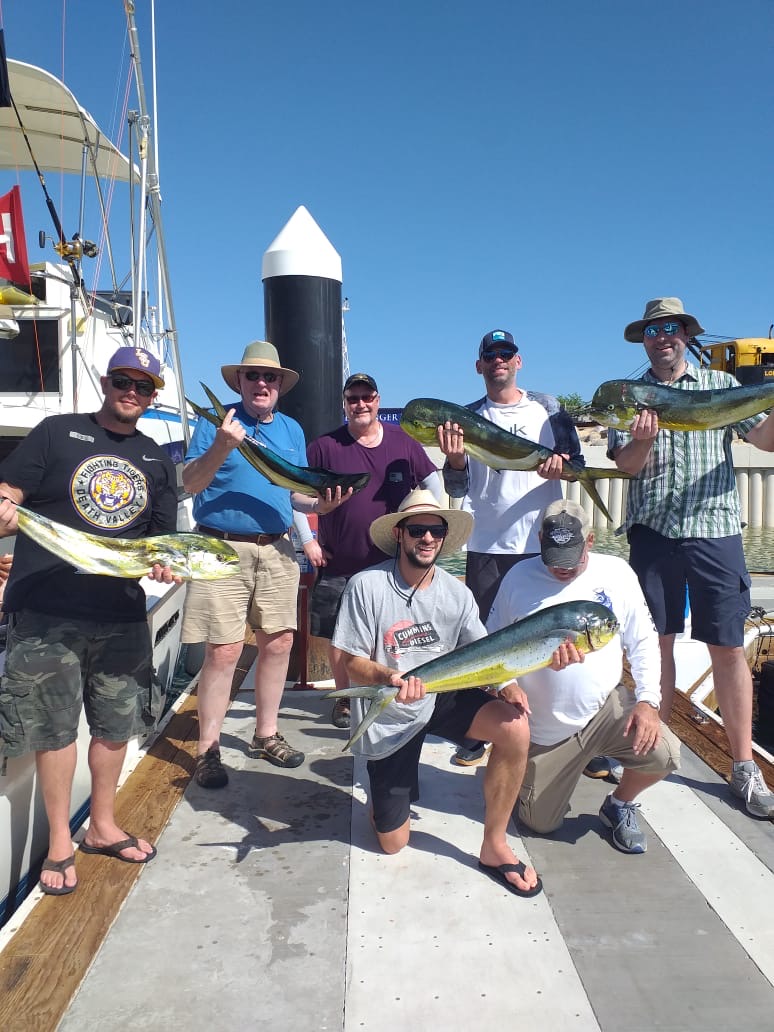 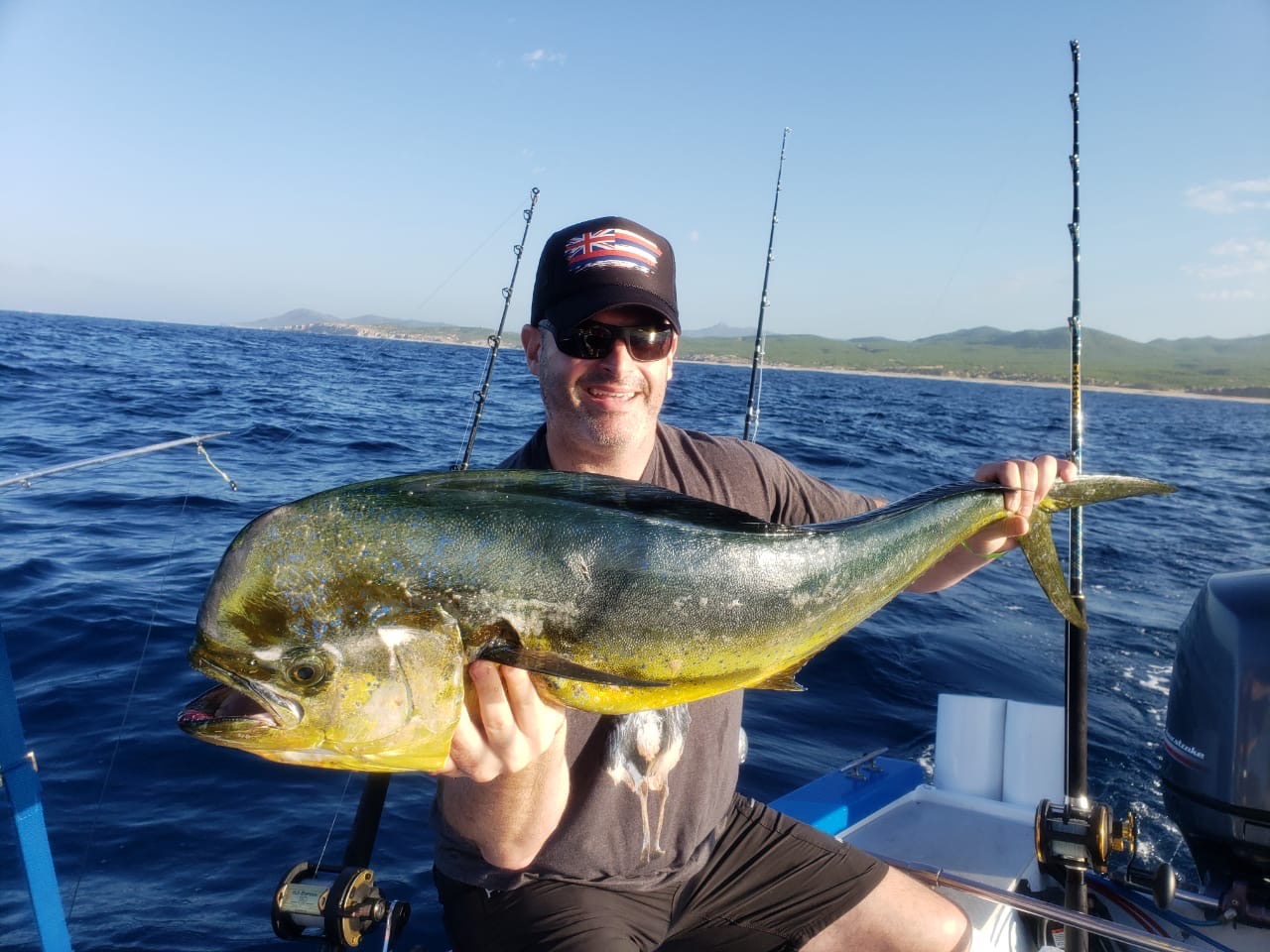 The 35′ Valerie released 5 Striped Marlin early on in the week, with the largest weighing approx. 130 lbs, and hitting on dead bait at Gaspareno. They also released 2 striped marlin and kept 4 dorado of about 20 lbs each for anglers the Mahoney’s and Lloyd’s from Nevada at Migrino and Gaspareno areas. More dorado for the Lowell and Hall families the next day on Valerie, keeping 5 dorado of about 20 lbs close to the Shoreline at Golden Gate.

The Pisces Viking 37′ BBII continues its fishing success; they released 14 striped marlin and 1 blue marlin in the span of three days, along with 8 dorado too. Their striped marlin catches were mostly out of the Old Lighthouse, using ballyhoo bait. Dorado hit ballyhoo as well. Their blue marlin weighed approx. 230 lbs and was caught on ballyhoo bait at Migrino. 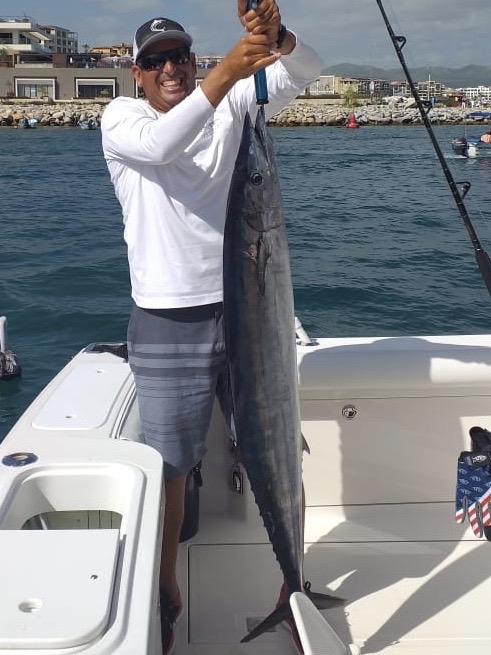 one of their wahoo caught this week

Pisces 35′ Bill Collector 2 also landed a few blues this week, all released. The first was caught on a green/yellow lure at Punta gorda, weighing about 200 lbs. They also caught 2 nice wahoo this day, of about 35 lbs each which hit rapala and chiwili lures. Anglers were Bryan Caulfield and Katherine Pelfrey from Florida. Baby brother, Pisces 32′ Bill Collector caught and released a 200 lbs Blue as well, theirs hit dead bait at San Jaime for anglers from Texas. They also kept 5 yellowfin of about 25 lbs each. 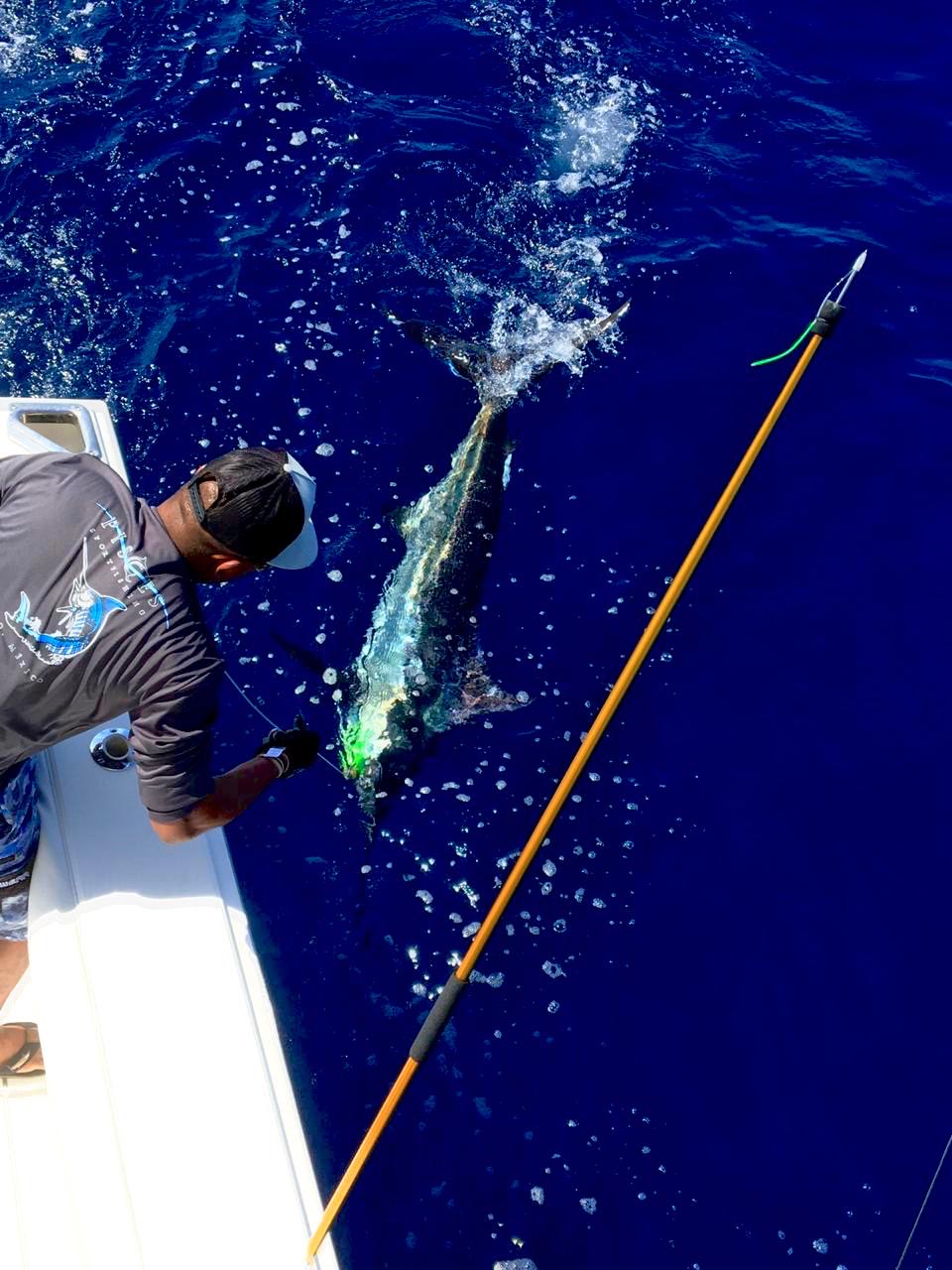 Pisces 42′ Yahoo was one of the few to land Black Marlin this week, as they competed in the Bisbees Black and Blue. They released an approx 240 lbs black at Destiladeras on dead bait for anglers from Illinois. The next day they released a slightly larger Black Marlin, this time at the 11:50 Spot, weighing close to 250-260 lbs; but still not enough to weigh in with at the Tourney. 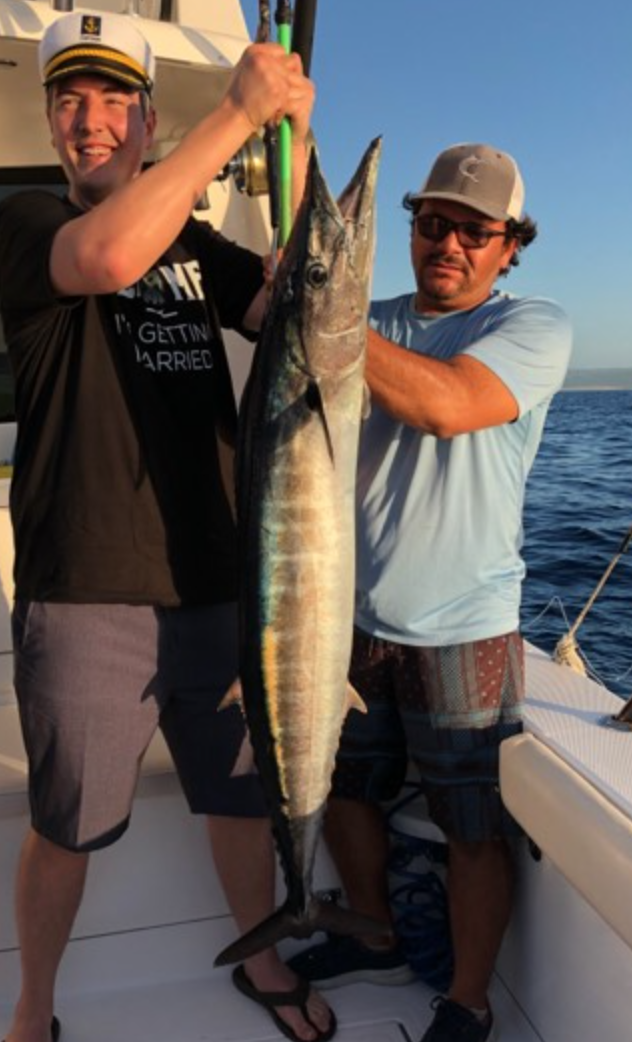 LOCATION: Pacific Side mostly from Old Lighthouse to Gaspareno for Dorado and Striped Marlin, and Sea of Cortez side for bigger Blues and Blacks; San Jaime for Tuna.