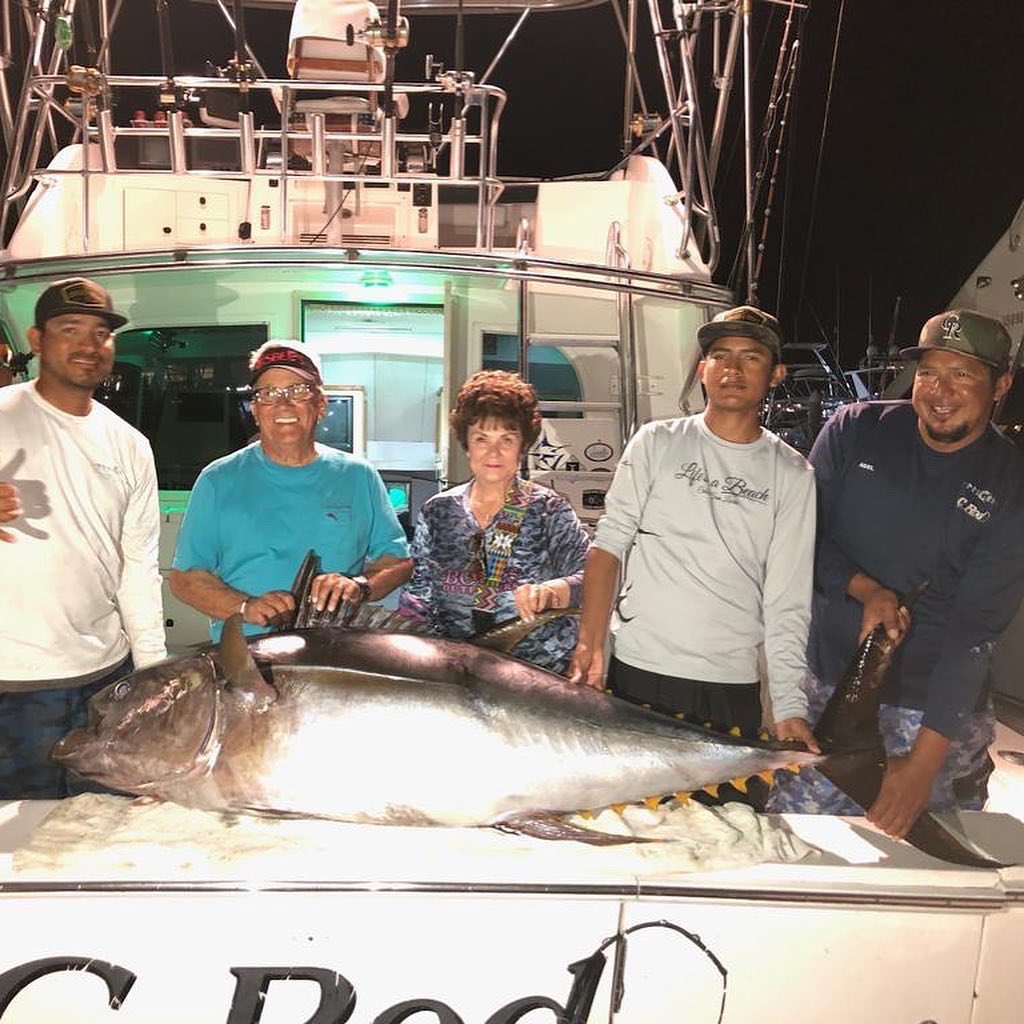 Good fishing continues in Cabo for Billfish, Dorado and Tuna, along with numerous Wahoo starting to show up, including a 61 pounder caught on Pisces 42′ Whiskey midweek. Port was closed Wednesday due to a torrential downpour that flooded downtown Cabo, but reopened the next day. Fishing slowed only slightly upon the port reopening, but by Saturday big Yellowfin Tuna showed up again. Pisces 32′ Bill Collector landed a 175 pounder, which hit on a lure at Golden Gate when trolling through a school of porpoise. This same day Pisces 38′ C Rod landed an approximate 300 pound Yellowfin after a 5 hour fight on stand-up tackle. This fish was caught in only about 30′ of water close to Migrino; taking a flying fish lure. The total Tuna count hit 197 in 5 days. There were 163 billfish caught and released (Striped marlin and Sailfish mostly; only one blue marlin caught this week). Dorado totaled 228 this week, catch limites respected. 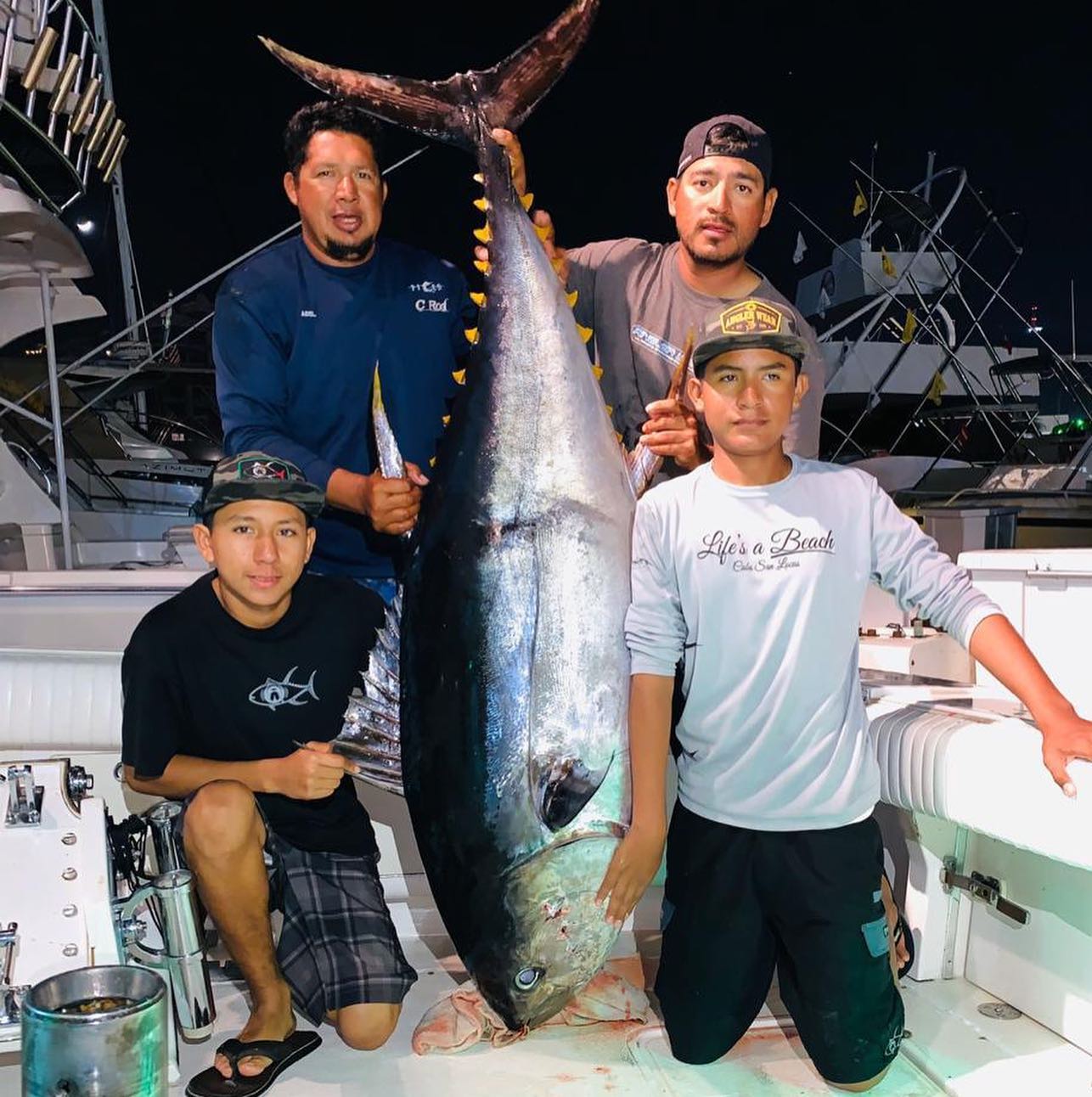 The Pisces 38′ C Rod crew with their approx. 300 lbs Yellowfin

Striped Marlin catches included, as mentioned before,  Pisces 31′ Ruthless which released 12 Striped Marlin in one day, and also kept 3 dorado  for anglers Bruce Welsh and Robert Burton from Canada. The previous day they released 7 Striped Marlin aboard Ruthless also. They also caught 3 Dorado on live bait. All fish were caught at the Old Lighthouse area. Billfish catches totaled 28 releases for Ruthless only, within 6 days. 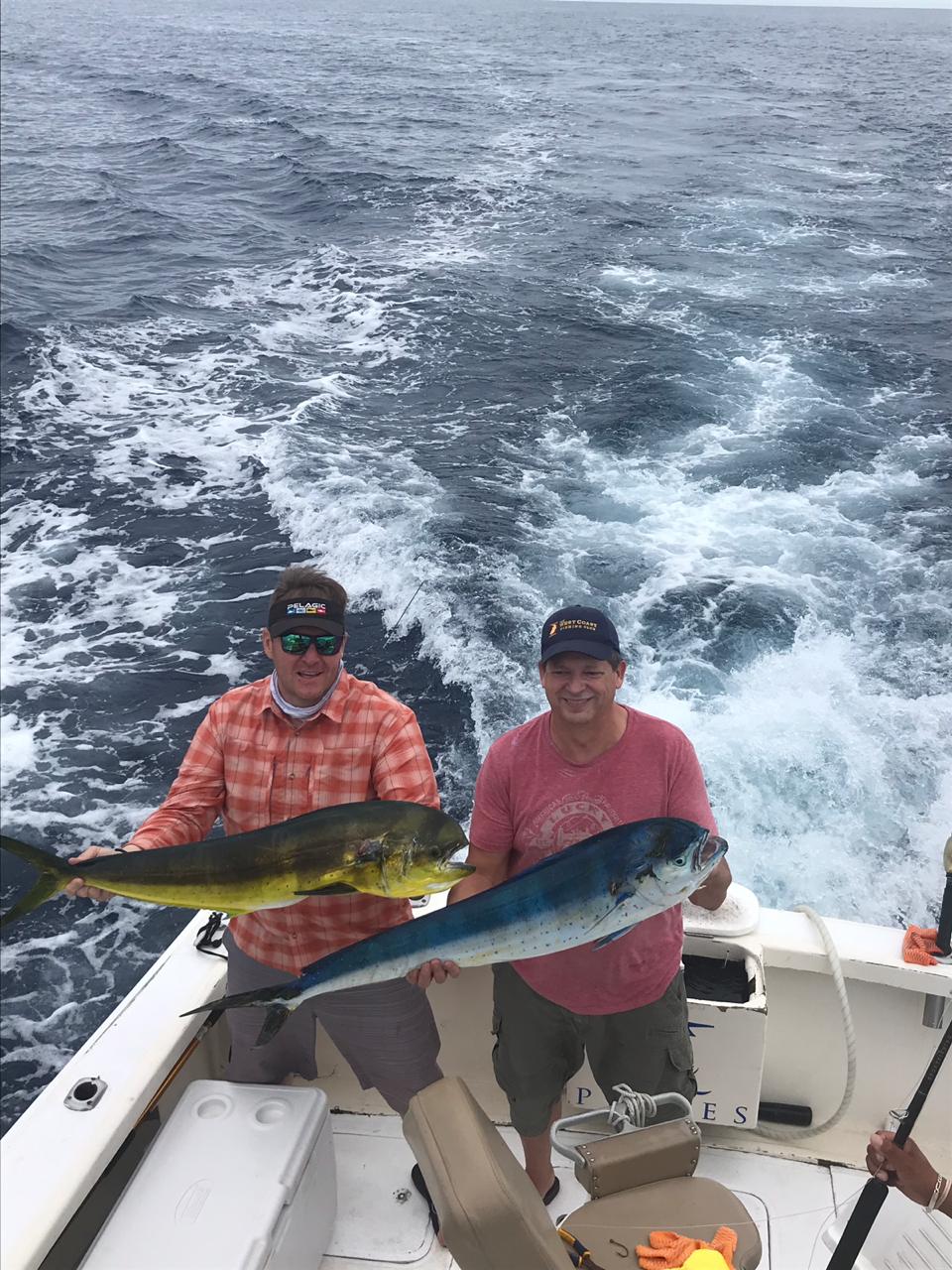 Anglers Bruce and Robert with 2 of their 3 dorado caught, plus 12 Striped Marlin released this day aboard Pisces 31′ Ruthless! 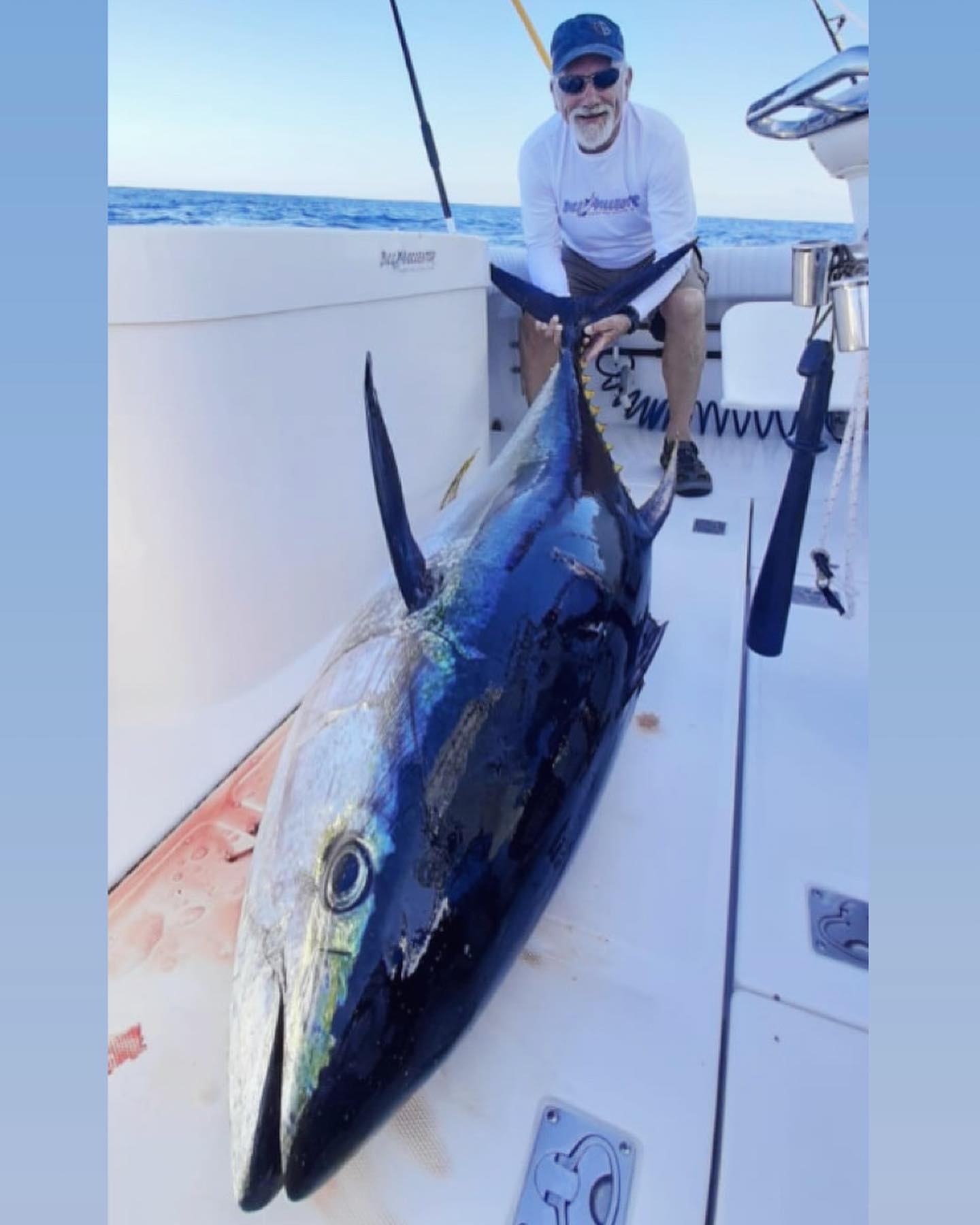 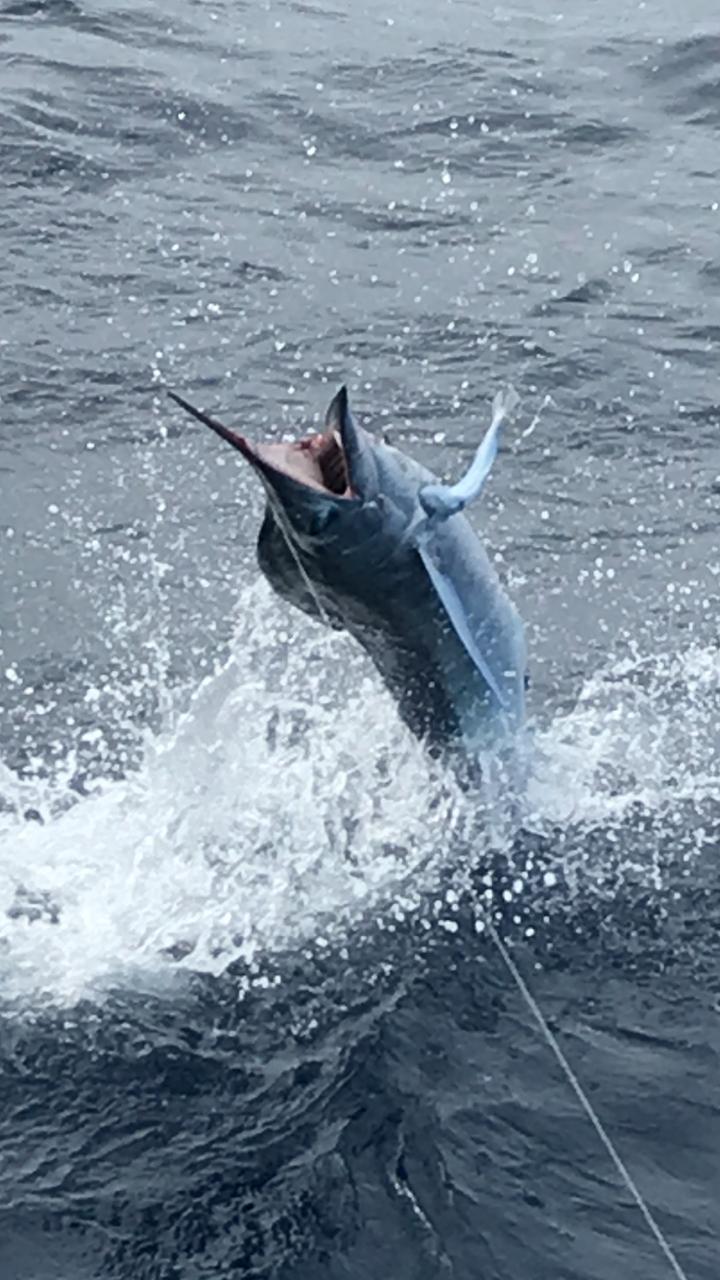 1 of 8 Striped Marlin Released on Pisces 42′ Caliente this week!

Pisces 31′ Tracy Ann released 7 Striped Marlin, weighing between 110 and 150 lbs on live bait at the Lighthouse as well. They also caught 2 skipjack and released a Sailfish of about 100 lbs there, for anglers from Sweden. They did well with dorado catches as well, totaling 12 dorado on another day. Marlin catches did slow slightly towards the end of the week, with fish moving away from the Lighthouse area.

This was also a great week for Pisces 40′ Chasin Tail, which totaled 16 dorado this week, along with a Striped marlin released on mackerel at the Lighthouse. Dorado hit on ballyhoo, mackerel and feathers mostly; between the Lighthouse and Los Arcos areas. Not only this, but they landed some nice Tunas on a combination of cedar plugs, and feathers and using the kite; 7 yellowfin total, with the biggest around 80 pounds. 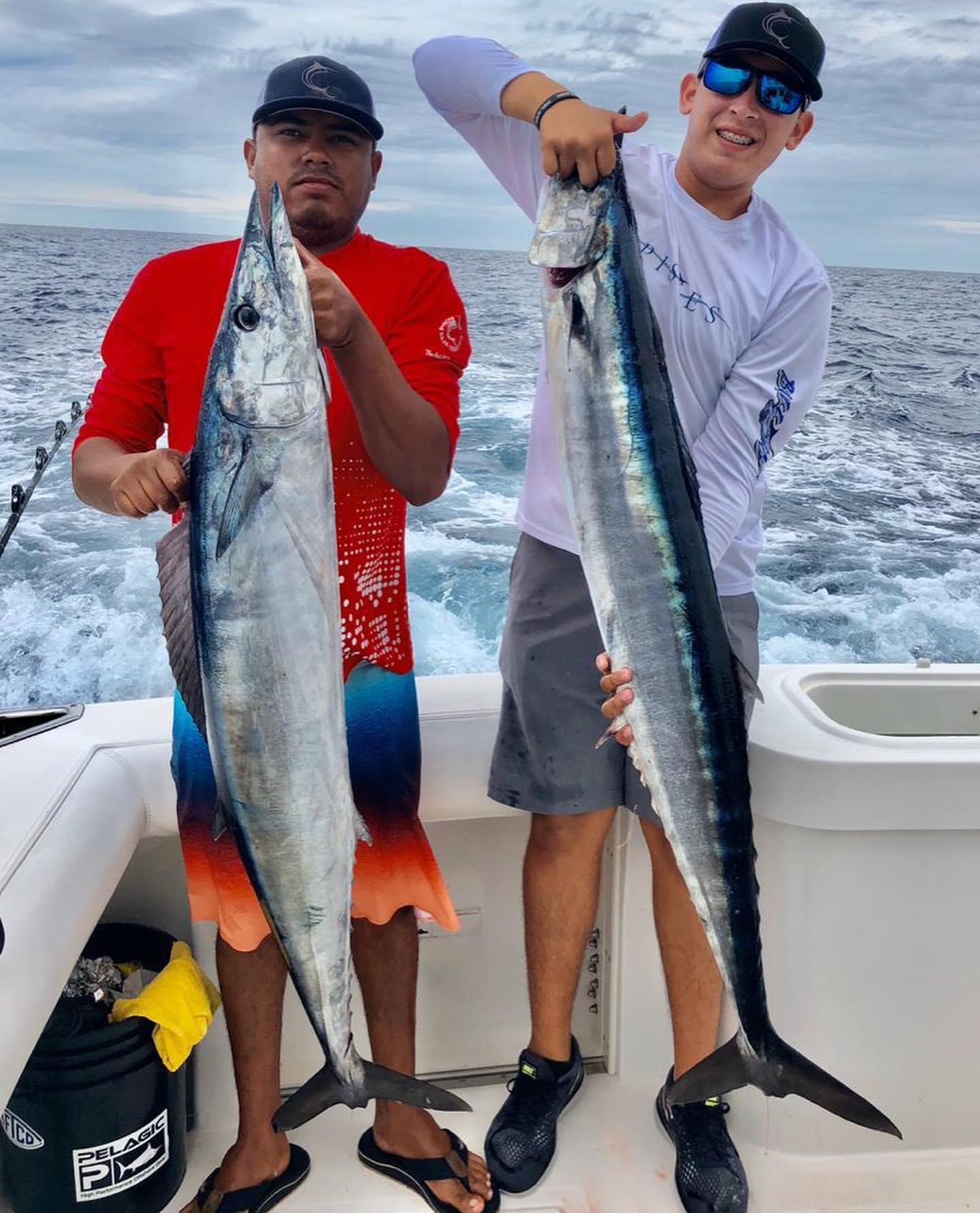 Pisces 38′ Speedwell also did well with tuna, landing 11 in one day for angler Gordon Pratt and friends at Golden Gate. All averaged about 20 lbs, and they also landed 2 dorado of about 10 and 15 lbs, hitting on dead bait at Los Arcos. Speedwell kept a nice 35 pound wahoo later in the week, that hit on a rapala at Pedregal, and then also kept 3 dorado that hit on ballyhoo at Los Arcos of about 15 lbs each for the Tomkins family. 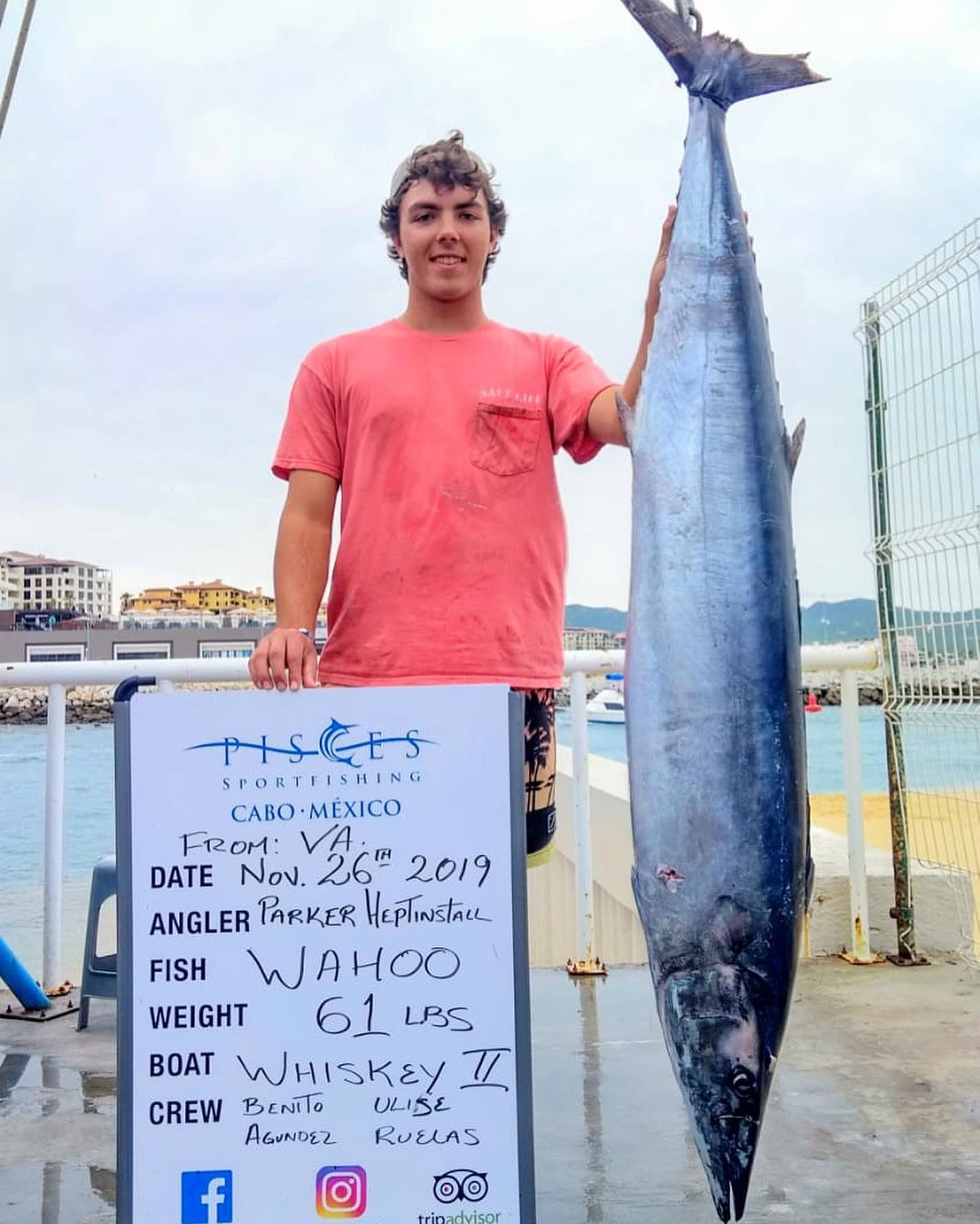 And impressing this week, Pisces 42′ Whiskey released 16 Striped Marlin total this week, with their best day including 5 Striped Marlin released, 3 dorado of about 15 to 20 lbs (on mackerel at Los Arcos) and a 61 Pound Wahoo caught by Parker Heptinstall and Richard Heptinstall.

More wahoo caught on Pisces 31′ La Brisa by the Olaughlin family from indiana. They landed 2 wahoo of about 20 and 25 lbs on lures at Pozo Cota and also caught 8 dorado of about 15 pounds there. Pisces 35′ Bill Collector 2 also kept two wahoo around the same size for anglers from Colorado this day; along with 4 dorado of about 15 lbs. The wahoo hit on rapalas and the dorado on different lures at Pozo Cota as well. 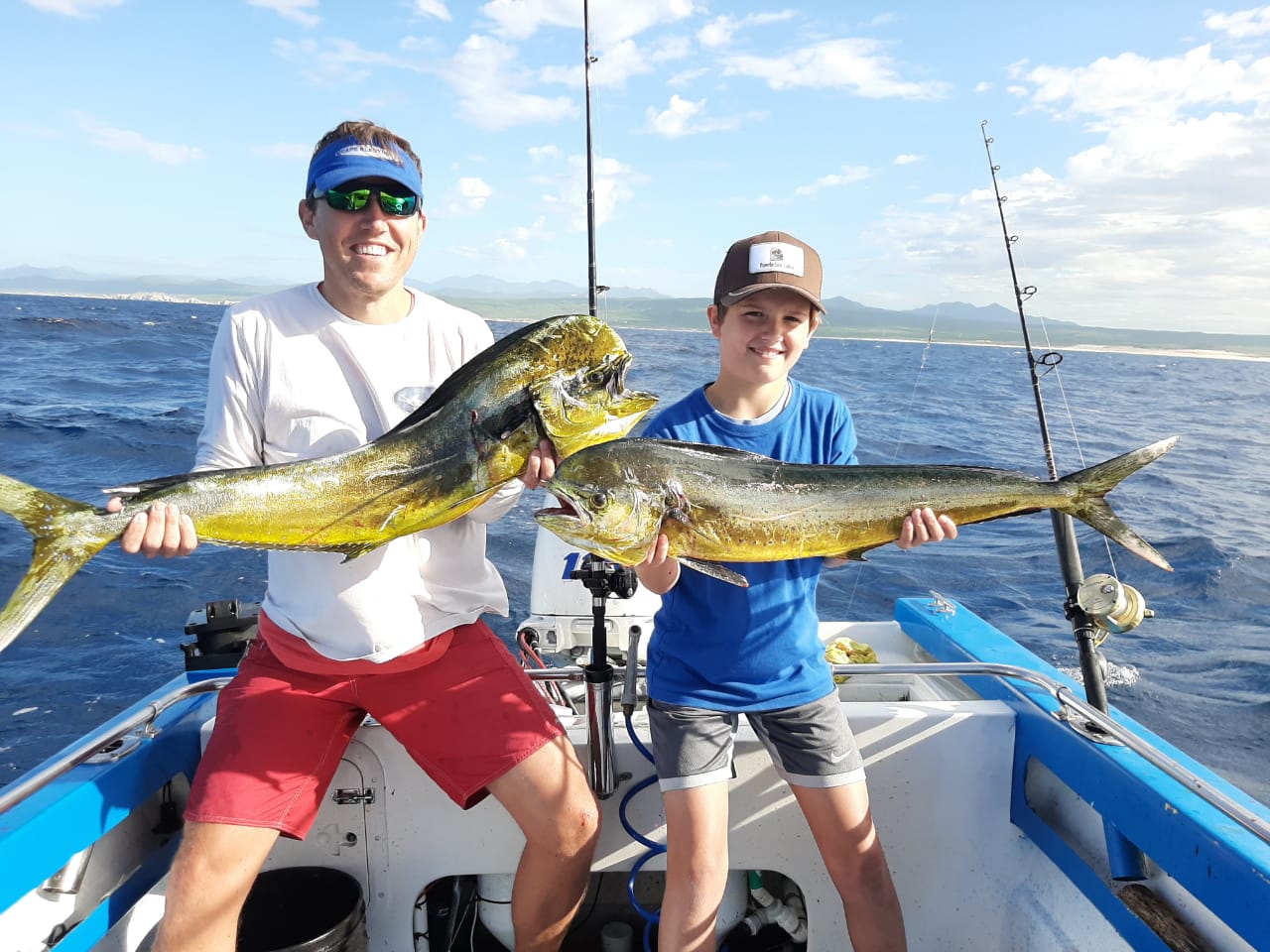 Even pangas got in on the wahoo action, Pisces 24′ Anamar II landed a 23 lbs wahoo and 2 dorado of about 15 lbs at Los Arcos for father and son, Dan and Luke Lajeunesse.