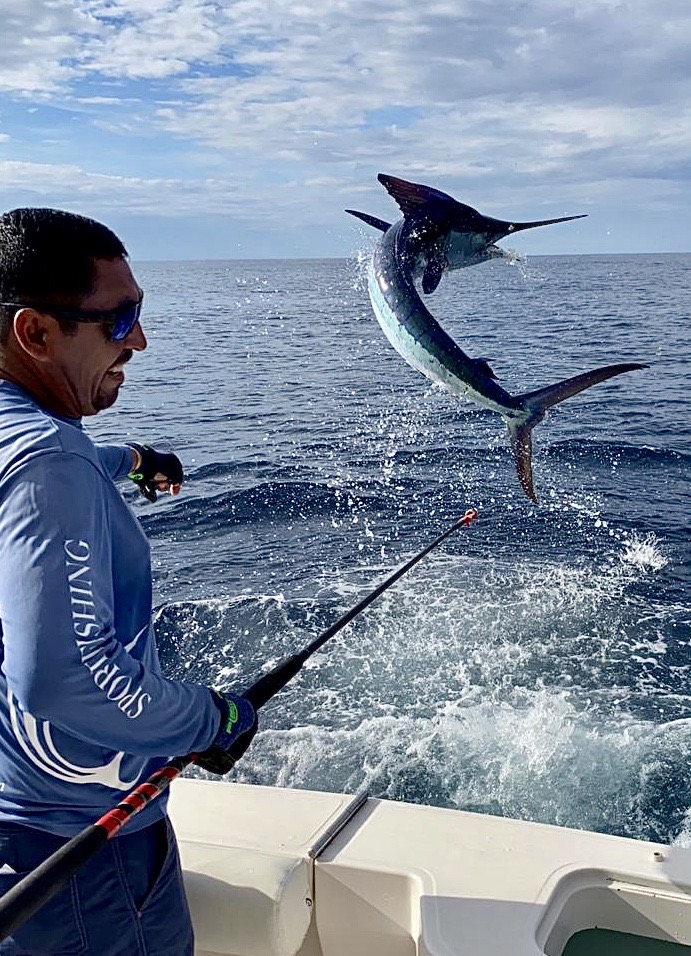 Pisces 42′ Caliente with one feisty striped marlin at the leader; they had five released this day!

Close to 100% catch success rate this week once again, with 90 out of 93 vessels catching fish. Dorado was undoubtedly the most abundant, with an astonishing 398 dorado caught and always respecting catch limits with releases. Billfish percentages were actually one point higher than last week, meaning still about half of our boats caught marlin and sailfish, but the numbers of fish are less in comparison: 84 billfish total. This is mainly because the  marlin are not conglomerating at the Old Lighthouse area anymore and have spread out, and also because the dorado are numerous and relatively close by, between Los Arcos and Migrino mostly;  anglers are choosing to go for the easy and delicious target instead, and are lucky to land marlin there too. The tuna fishing continues to impress, a total of 142 caught with several fish between 100 and 200 lbs each.  For example, only yesterday, Pisces 35′ Bill Collector 2 caught two yellowfin one of 100 lbs and the other 218 lbs at the San Jaime Banks. Others such as Pisces 31′ La Brisa didn’t go far to catch them, they had 5 yellowfin, with a 119 pounder and a 60 pounder both caught close to Los Arcos on feathers. Other species caught were mostly wahoo, roosterfish and  skipjack.

We’ll start with the dorado and billfish first, as for the most part they were found in areas relatively close by from each other, so anglers could be lucky to land dorado and marlin in the same day. Pisces 31′ Ruthless is an excellent example of this, and is one of the top dorado and marlin boats this week. Anglers Fred Ludington, Ryan Bonner, Tim and William Driscoll from New Hampshire had an amazing day with not one or two, but 5 Striped Marlin released (the most caught by one boat) between 100 and 120 lbs each, hitting on live and dead bait at Los Arcos. Not only that, but they landed sixteen dorado there too! All fish were around 10 to 20 lbs each, releasing 8 total. The next day, the same anglers, aboard Ruthless again, caught seventeen! Releasing ten total, all caught between Los Arcos and Golden Gate.

Pisces 35′ Valerie found luck this day at Gaspareno too, with 10 dorado, 4 released, caught on a combination of lures, live and dead bait. Doug and Megan Carter, along with Kyle Austin released 1 large sailfish, of about 110 lbs, on live bait at Los Arcos as well. Then an action packed day for James Kistlerfrom Phoenix, who released 3 striped marlin at Cerros de Arena on Pisces 35′ Valerie. Then they went on to land 6 dorado, respecting catch limits; these hit on mackerel and white/red feathers between Migrino and Pozo Cota. Still, angler Dave Adams and friends caught 12 dorado the next day, averaging 15 lbs each, on mackerel and feathers once again out of Migrino. They also released a nice striped marlin on a purple lure at Migrino. To finish out their fantastic week, the 35′ Valerie had 2 striped marlin released of about 120 lbs each at Los Arcos, for anglers Brad Garlich, Chuck Leuck, Joe Garea and Robert Griggs from FL. They also landed 2 dorado of about 15 lbs, hitting on a green/yellow lure and a nice wahoo of about 35 lbs, hitting on green lure. 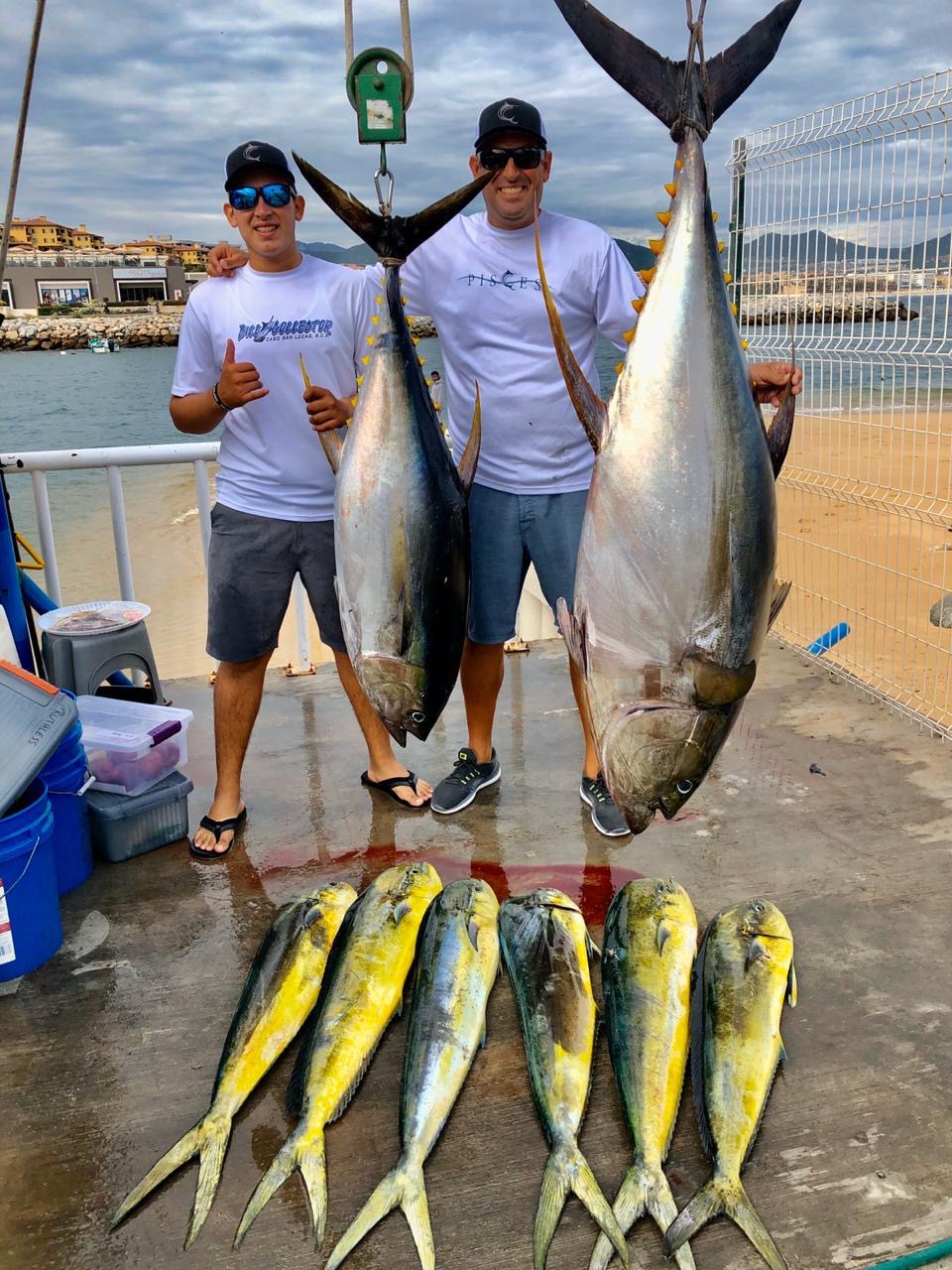 A few boats had excellent catches like this, landing three or four species in one day. For example, Pisces 31′ Rebecca and anglers Bertil and Katarina Pettersson from Sweden released 5 striped marlin, the largest of about 150 lbs, on live mackerel. They also caught 4 dorado on green lures and mackerel, plus 2 yellowfin of about 10 lbs, and 2 skipjack on cedar plugs. They fished between the Finger Bank and Todos Santos as they were targeting Marlin, but the bite has not arrived yet (we’re expecting to see a terrific marlin bite here when the fish move out of Mag Bay which has had one of its best seasons so far). The next day they headed back and released  2 striped marlin on live bait, 5 dorado of close to 20 lbs, 4 yellowfin of about 15 lbs, and 1 wahoo!

Pisces 31′ Tracy Ann had similar results but a bit closer to home. The Van Vlilet anglers from British Columbia headed to Golden Gate and released 1 striped marlin, kept 5 dorado of about 15 lbs and 11 yellowfin of about 20 lbs each too. These hit on cedar plugs, feathers and hoochis. Pisces 31′ Tracy Ann released 2 striped marlin of about 130 lbs each at Gaspareno also, and caught 10 dorado on live and dead bait (2 released). The dorado averaged between 10 and 15 lbs each; for anglers from AZ.

Pisces 30′ Karina released 4 striped marlin, kept 3 dorado of about 15 lbs and also caught 11 yellowfin of about 15 lbs each on feathers and lures at Golden Gate. Anglers were Edwin and Ryan Ness. 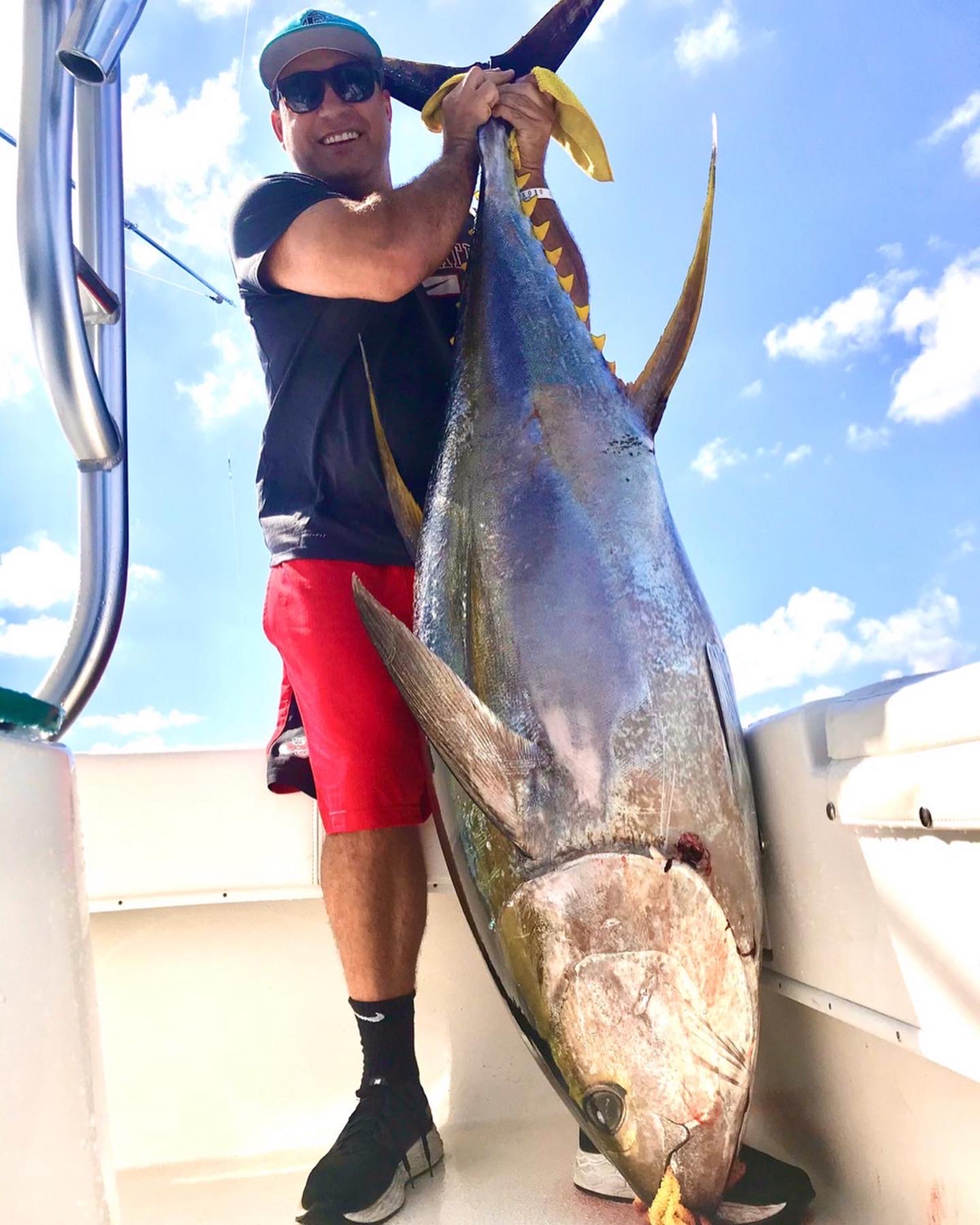 Yellowfin caught on Pisces 25′ No Borders

Pisces 31′ La Brisa released 1 striped marlin at Pozo Cota, caught 13 dorado between 10 and 20 lbs each on blue/white lures and mackerel at Los Arcos and 2 yellowfin on feathers. The next day, they were surprised to get a few big tuna on their feathers. Anglers Daren and Garret Curry and Trevor Rhoden headed to Elias Calles and landed a few 20 lbs fish, and a 60 and 119 lbs yellowfin. They also released a striped marlin that hit on a hoochi.

Pisces 32′ Bill Collector did well with anglers from Washington aboard; landing 8 yellowfin, the largest was 128 lbs and hit on feathers, hoochis and cedar plugs at the 220 spot. They also landed a 15 lbs dorado on live bait there.

And last but not least, Pisces 25′ No Borders caught 4 yellowfin with the largest weighing in at 181 lbs.

LOCATION: Pacific Side, from Los Arcos to Migrino and Elias Calles for Dorado and Striped Marlin; San Jaime, 220 and Golden Gate for Tuna.

WEATHER CONDITIONS: Good weather conditions with minimum swell, except for two days midweek. Port Closed Sunday due today, Sunday, due to Storm which so far, has only brought mild showers.