We are starting to get excited about the June season here in Cabo. Things have really picked up in the last few weeks and this week’s catch success amongst boats has climbed to almost 90%. The majority of boats are heading for striped marlin, with up to 6 striped marlin caught per boat in one day, but tuna and other smaller game catches have been equally good. The roosterfish are definitely here now, making for a lot of fun fishing, with some boats catching up to 9 of them per outing! Jack crevelle, amberjacks, grouper and sierra mackerel have been the majority of our “other” species caught. And let’s not forget about our almost 700lbs black marlin hooked this past Sunday; all signs of an exciting June tournament season, kicking off with the Pelagic Cabo Summer Slam in this next week and the Stars and Stripes Tournament at the end of the month. 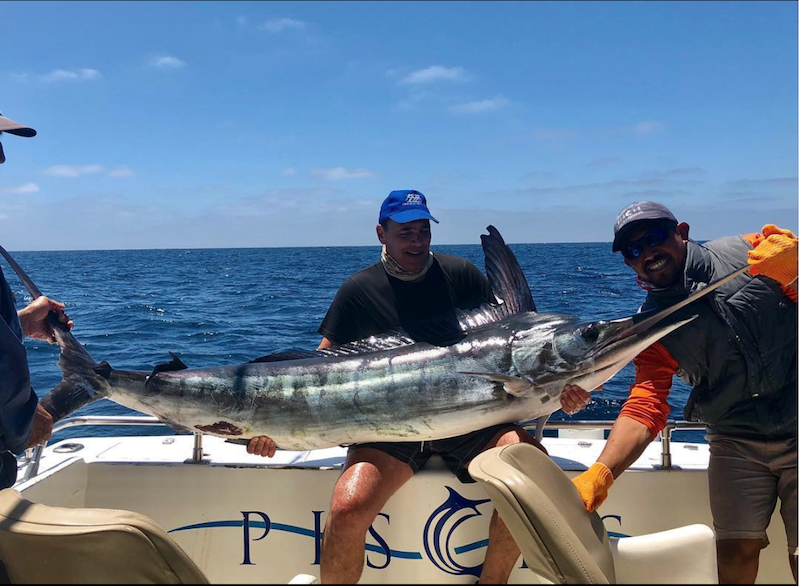 This week’s top marlin boat was the Pisces 31ft Rebecca, with 18 striped marlin successfully caught and released in 5 days of fishing. They kicked off the week, on May 19th, with anglers from Discovery Bay, CA, catching and releasing 5 striped marlin on caballito bait out at Destiladeras. The marlin ranged from 100 to 130 lbs each.

Angler Jay Symcox from Austin, Texas, fished two days with the Rebecca crew and caught 9 striped marlin, which he released. May 21st he fished with buddy Mathew Medows and caught 4 striped marlin on the larger side, ranging from 160 to 180 lbs each. These hit on sardines out at Destiladeras.  The next time he went out, they tried the same tactic and found results, and this time he fought 3 striped marlin solo. They used sardines and mackerel for bait out at Destiladeras, and landed marlin that ranged from 100 to 140 lbs each.

As for tuna this week, we saw a shift in location, with boats finding them a little closer to home. May 23rd the Pisces 31ft La Brisa and anglers from Lino Lakes Minnesota, caught 4 yellowfin tuna that ranged from 10 to 20 lbs each. These hit on cedar plug lures at La Herradura. 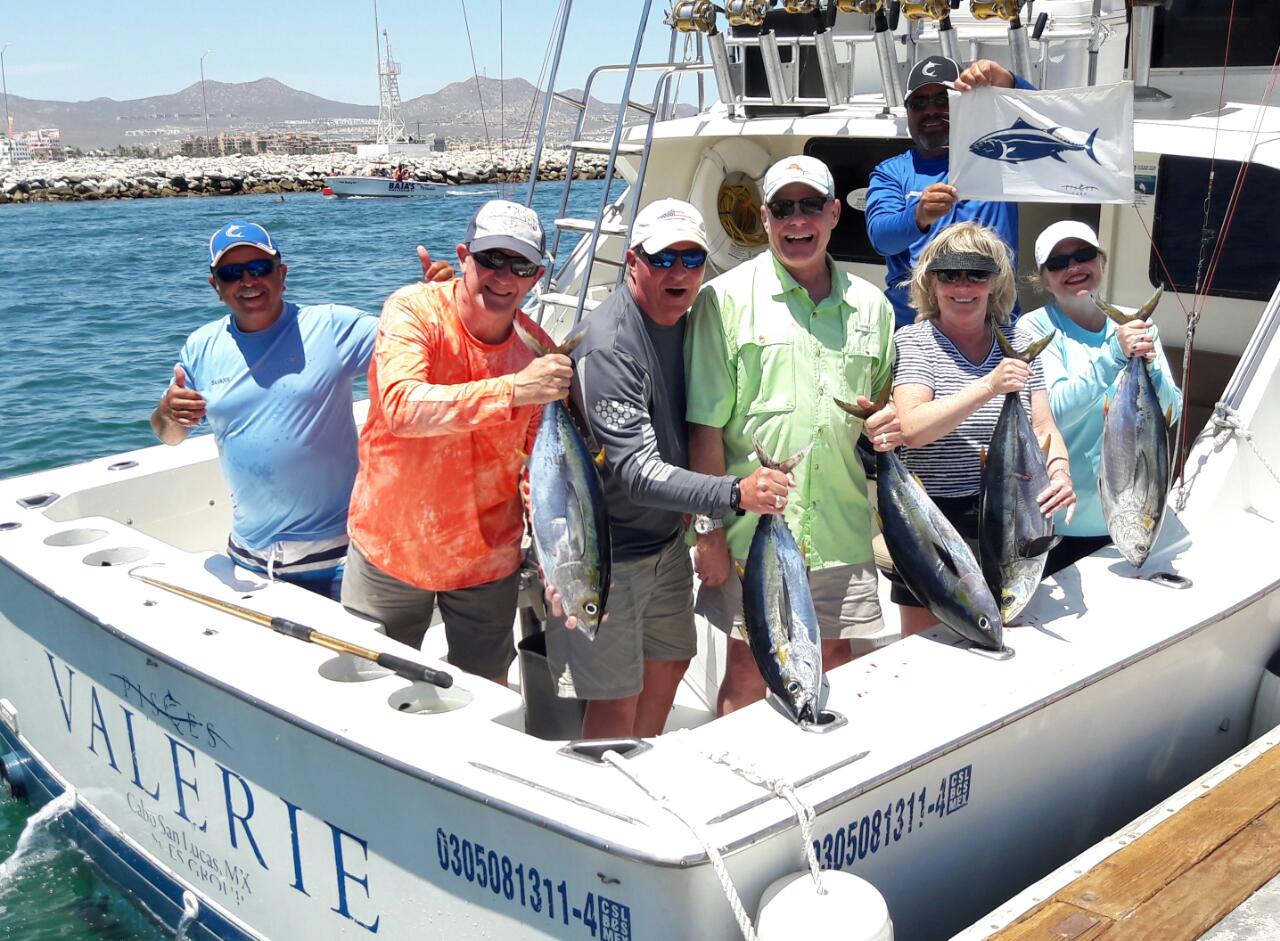 This same day the Pisces 35ft Valerie found 5 yellowfin tuna, at about 5 miles from the Old Lighthouse. These ranged from 5 to 15 lbs each and hit on cedar plugs as well. Anglers were the Elliott and Reimer families from Houston, Texas.  The next day, the Valerie found luck again, this time at Cabeza Ballena, about 4 miles out. They caught 4 yellowfin tuna of about 15 to 23 lbs each on cedar plug lures.

One of the only two dorado caught this week, was found by the Pisces 42ft Yahoo outside of Chileno, which weighed about 12 lbs. Anglers from Louisiana also caught 1 jack crevelle of about 13 lbs, on caballito bait at Destiladeras. 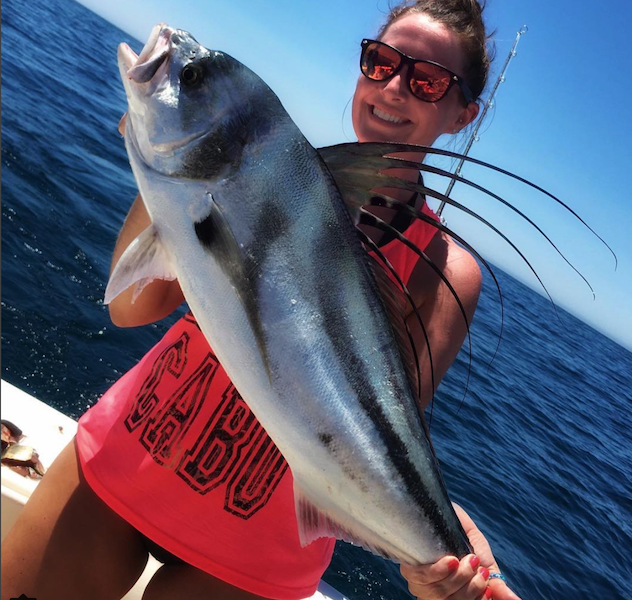 Morgan Nicks with her first ever roosterfish!

We also had some of the most exciting and fun inshore fishing we’ve see in quite some time. Take for example, our 23ft Pisces Panga Anamar, which caught 1 amberjack, 3 jack crevelle (of about 20 lbs each), 2 red snapper of about 8 lbs, 3 sierra mackerel of about 5 lbs and 3 nice roosterfish, with the smallest only 5 lbs and the largest being 20 lbs. All roosters were released. Anglers were George and Lydia Armistead from Tennessee, which used mainly caballito bait and hoochi lures to land their catches.

That seems like a day that is tough to beat, but you be the judge, as our Superpanga, 27ft Tres Amigos, caught 14 sierra mackerel of about 5 lbs each, 9 rooster fish up to 15 lbs each (all released), and 4 jack crevelle, also released. All fish were caught out Solmar by anglers David and Spencer Schwabauer from Wyoming.

Pisces boats caught 166 fish total this week, with 46 being marlin, 55 being tuna, 2 dorado and 63 being smaller game fish. All marlin were released, and catch limites well respected.

WEATHER CONDITIONS: Beautiful sunny skies and moderate/calm waters. Some wind picked up in some areas.

AVERAGE WATER TEMP: Water temp varied from an average of 74F to 86 F from East Cape to Pacific.