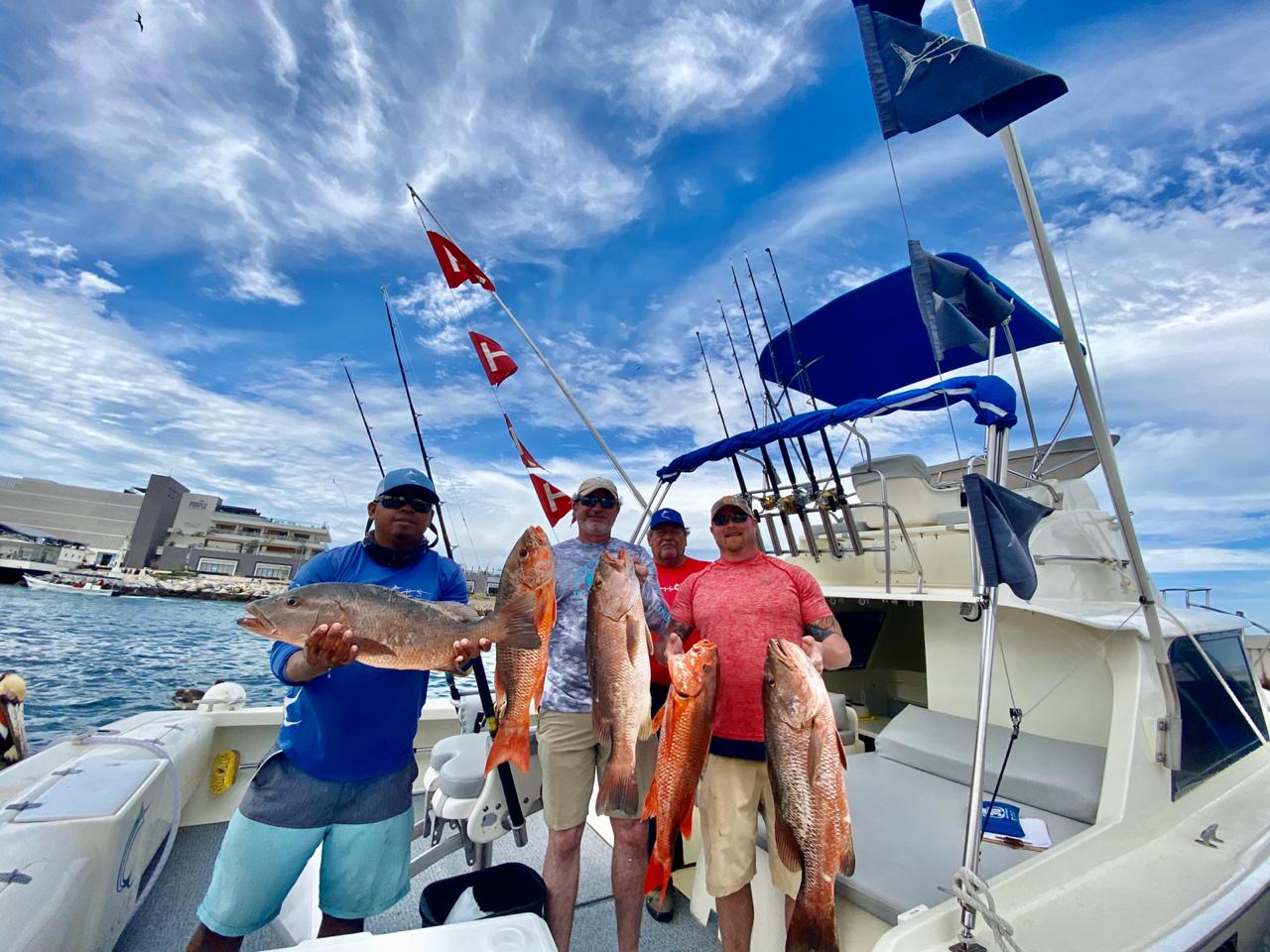 We continue to see good catches of Striped Marlin, Yellowfin Tuna and mostly Snapper and Grouper this week, although the quantity of Marlin caught and released did go down.  Total number of Marlin caught and released were 43 this week, with only 2 Dorado and 41 Yellowfin tuna. In the “Other” category we pooled mostly small game and bottom fish like Snapper, Grouper, although we also had  one or two Roosterfish, Triggerfish, Sheepshead and the like. These added up to 98 fish. 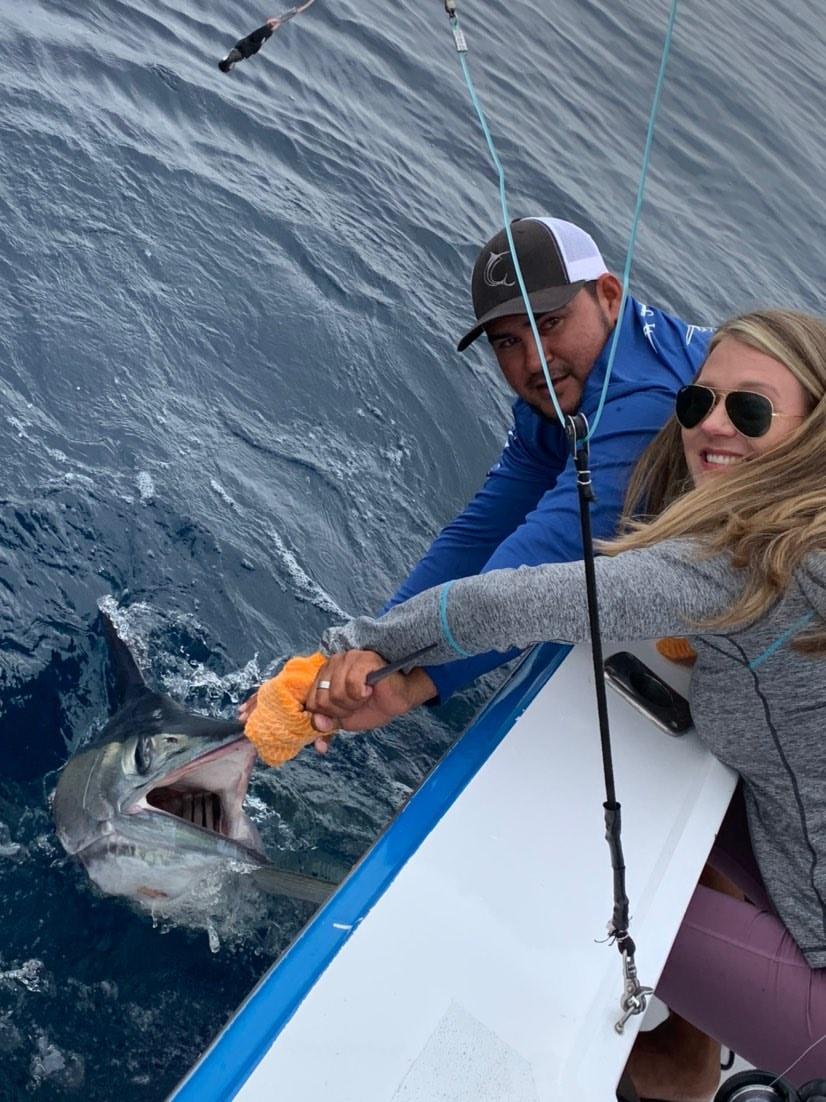 Most boats averaged 1-2 Marlin released per boat, with Pisces 31′ La Brisa standing out on Friday, going 5 for 7 on Striped Marlin. This day they found the Marlin by sighting them on the surface and casting live mackerel bait. All marlin were caught and released at Golden Gate. They also caught 5 Red Snappebof about 20 lbs each that day at Los Arcos for anglers Michael Simpson and Tyler Symens who fished the previous day aboard Pisces 35′ Valerie. When fishing aboard the Valerie they released 1 Striped Marlin of about 90 lbs and kept 4 Red Snapper of up to 20 lbs, and all landed on caballito and mackerel bait at Golden. 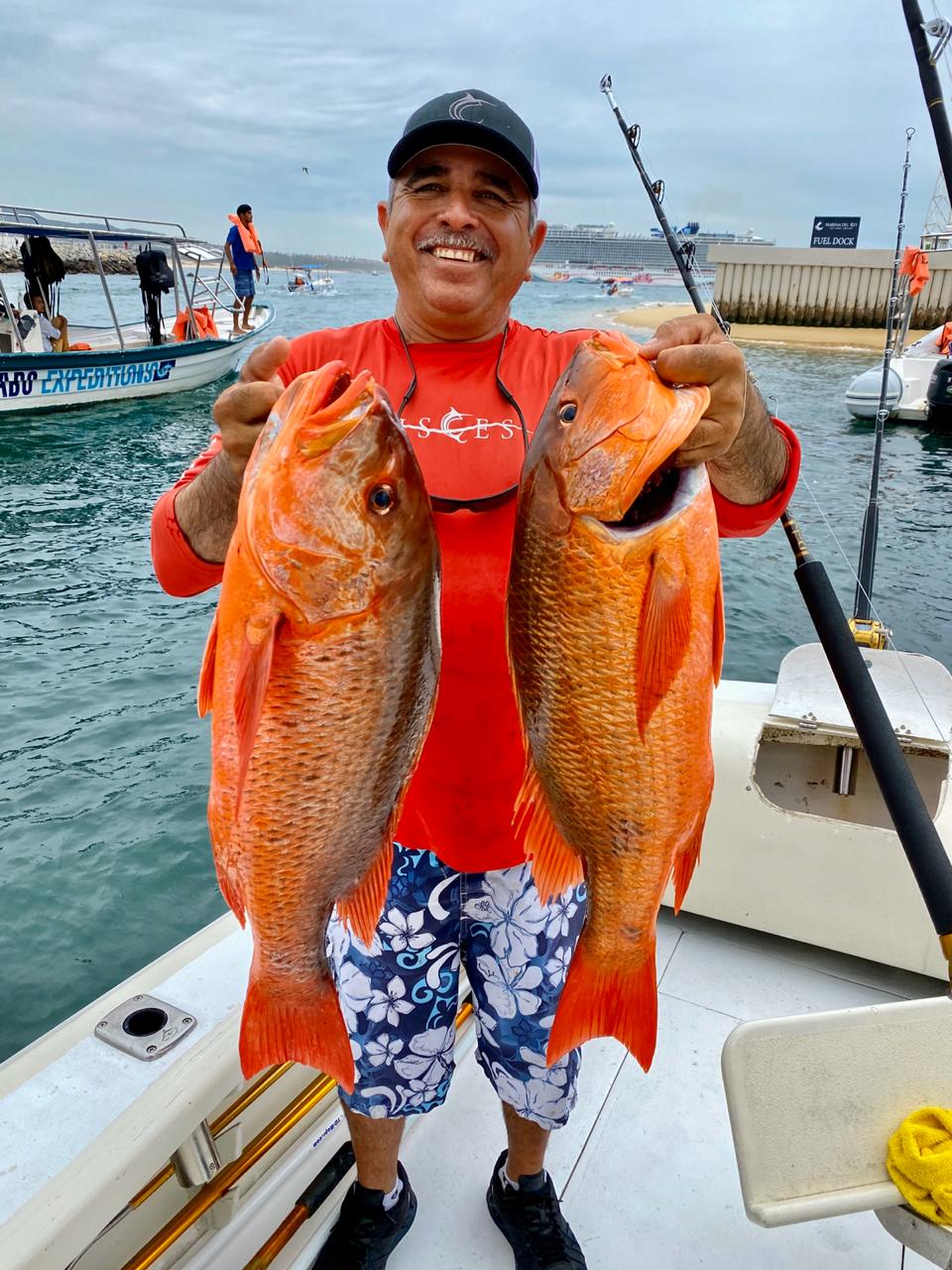 And 35′ Valerie continued the week with good catches, Captain Roberto Sandez always eager, found 2 Striped Marlin on mackerel at Golden Gate and then headed to Los Arcos and Las Margaritas to bottom fish. There they landed 4 Red Snapper of about 15 lbs, 3 Triggerfish and a few others. All for the Hiebert and Reach families.

Captain Julio on the Pisces 31′ Tracy Ann found 2 Marlin of about 110 lbs at San Jaime, casting live caballito and mackerel to successfully release the 100 lbs approx fish. He then also headed to Los Arcos for Red snapper and found four nice ones, of about 20 lbs for anglers Dan and Robin Sedevie from North Dakota. 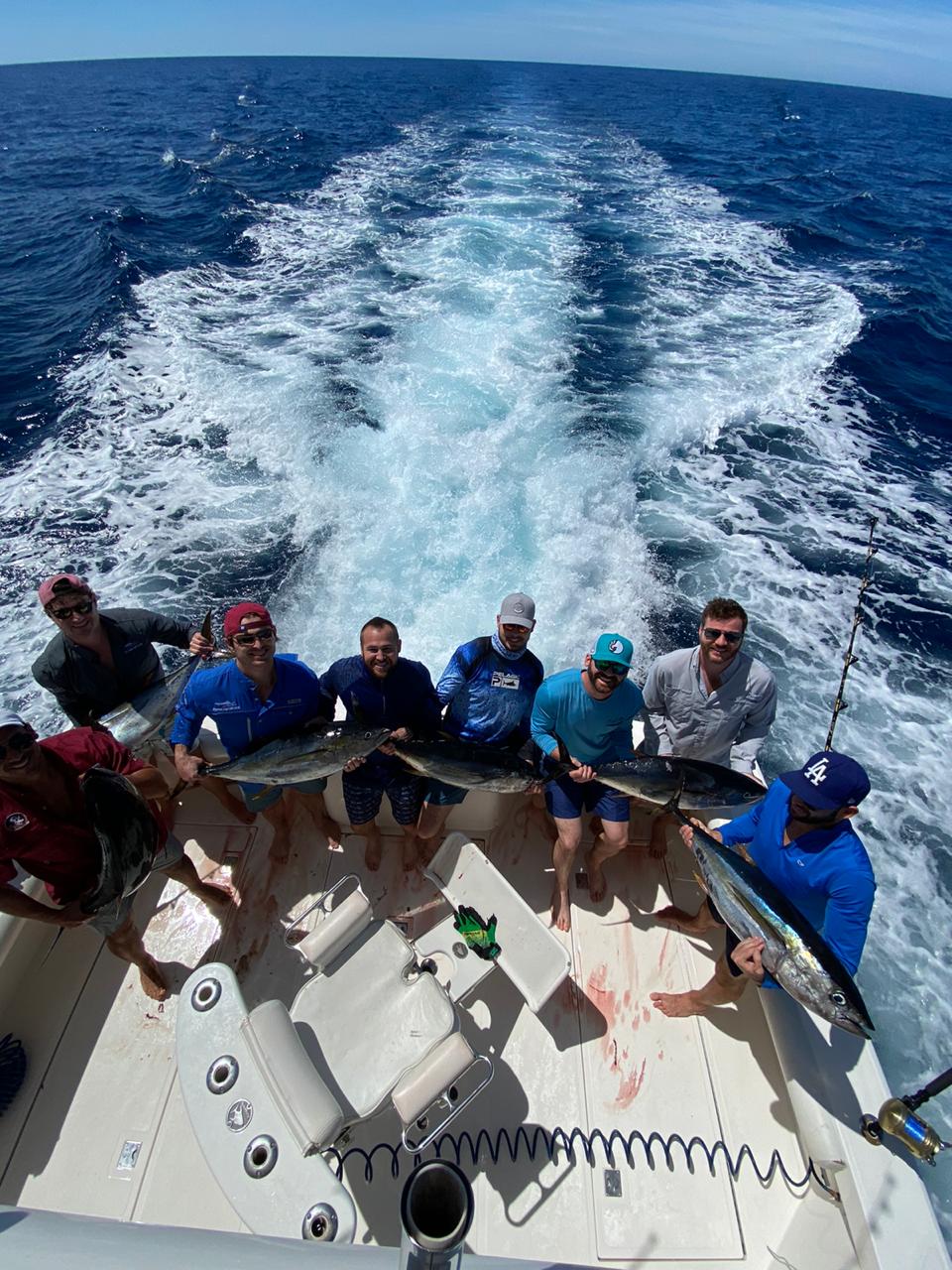 Pisces 42′ Hot Rod – Yellowfin on a nice sunny day for the boys!

Tuna numbers per boat were not overwhelming this week either, but the tuna size did increase. Mostly we caught tuna between 35 and 50 lbs each, with a few between 15 and 20 lbs. Most tuna was caught out at the San Jaime Bank and Golden Gate.

One of the Top Tuna boats was of course Pisces 31′ Tracy Ann, although mostly catching some smaller sized fish compared to other boats. For example, anglers from Woodlands, Texas, landed 10 Yellowfin of about 15 to 20 lbs each on cedar plugs at San Jaime.

Pisces 40′ Chasin Tail had 13 Yellowfin over the span of trips the week, with all fish ranging from 35 to 50 lbs each. On one of their best days they had 5 of around 45 lbs each, all caught at San Jaime on cedar pugs and feathers. 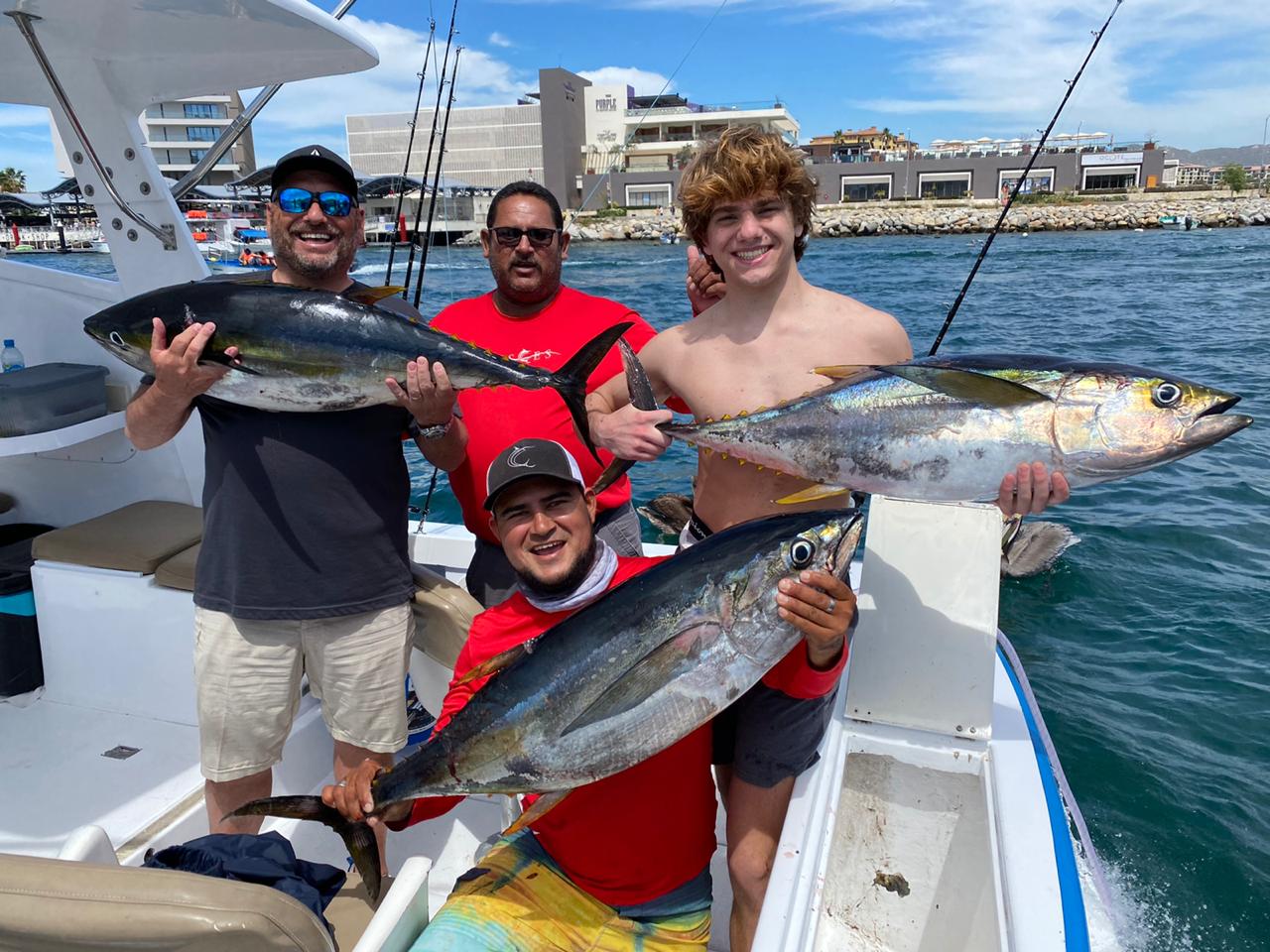 Pisces 28′ Andrea with 3 nice YFT for Stephan and William

Pisces 28′ Andrea also found some decent tuna, 3 Yellowfin around 30- 45 lbs each hitting on live mackerel at San Jaime for Stephan and William Constanineou.

28′ Andrea became out top boat in our “Other” Category, doing well with bottom fishing this week, but also getting into some nice tuna. For example, the Puricelli family from Texas, had a BUSY day, releasing 1 Striped Marlin of about 120 lbs on Mackerel close to Migrino and then keeping 2 Grouper, 15 Ladyfish and 2 Red Snapper, plus Sheepshead and Triggerfish too. 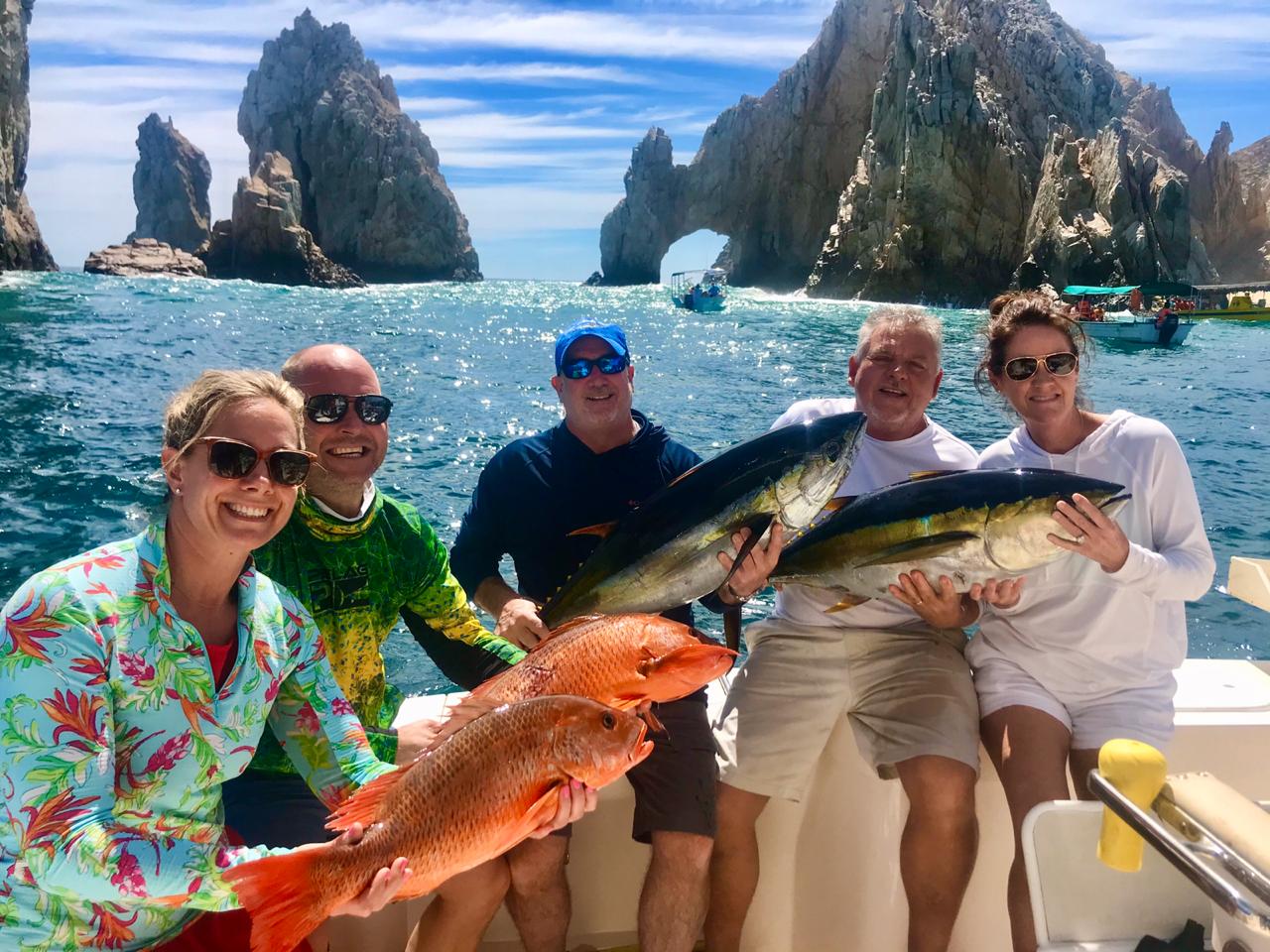 Pisces 42′ Caliente also stood out this week, getting into all species, with one day of fishing for anglers from Pompano beach, FL, producing 1 Striped Marlin release of about 100 lbs on Ballyhoo at San Jaime and 2 Yellowfin tuna of about 35 lbs each found there as well, hitting on mackerel. Then, when heading to Los Arcos they released 1 Roosterfish of about 15 lbs that took mackerel and kept 2 nice Red Snapper of about 20 lbs each. 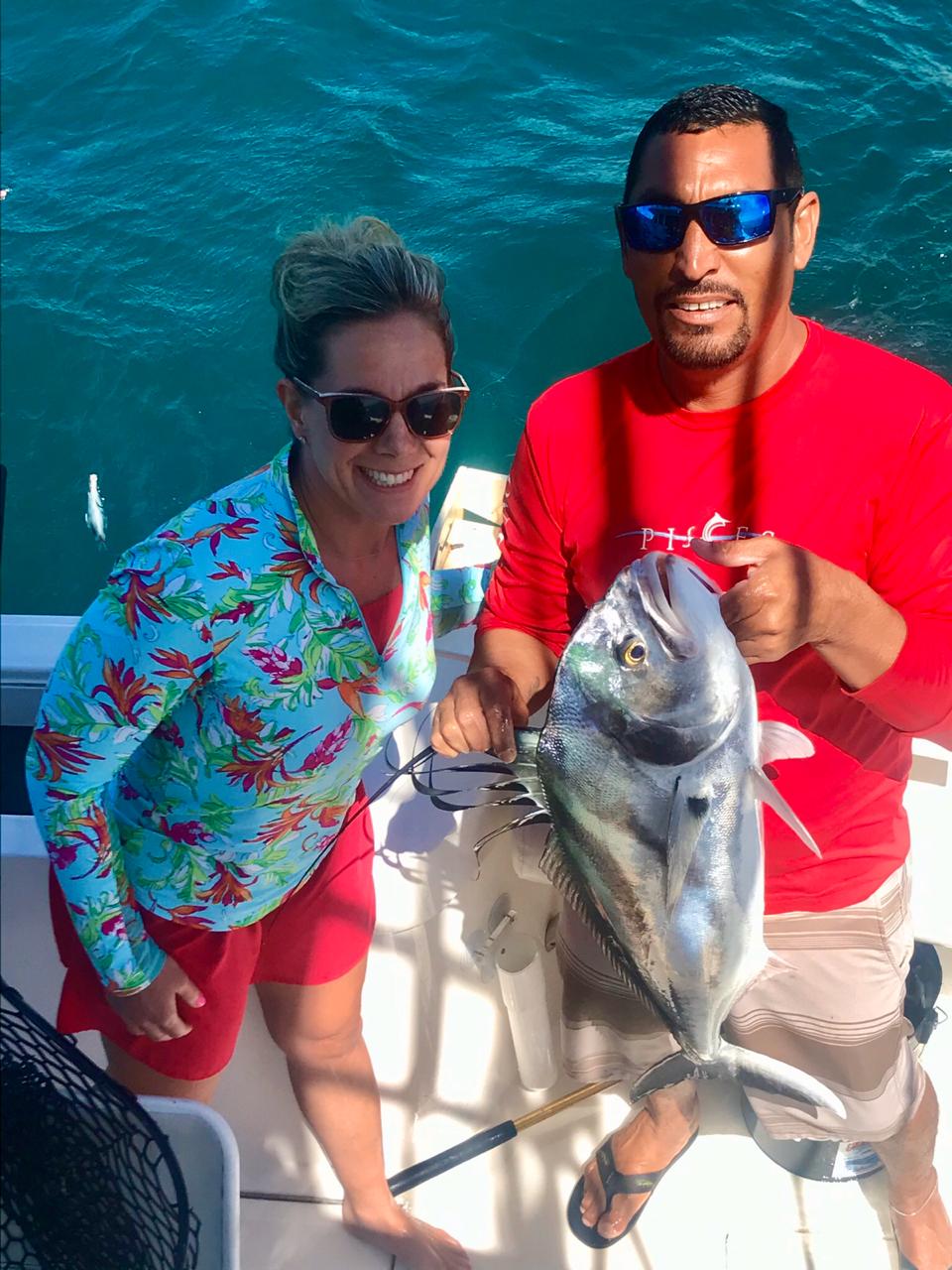 WEATHER CONDITIONS: Mostly calm seas and scattered clouds, with weather that averaged around 82F in the day. Did picked up on Wednesday and Friday mostly, getting up to about 15 knots in the afternoon. Other days the wind and swell were minimal to none.