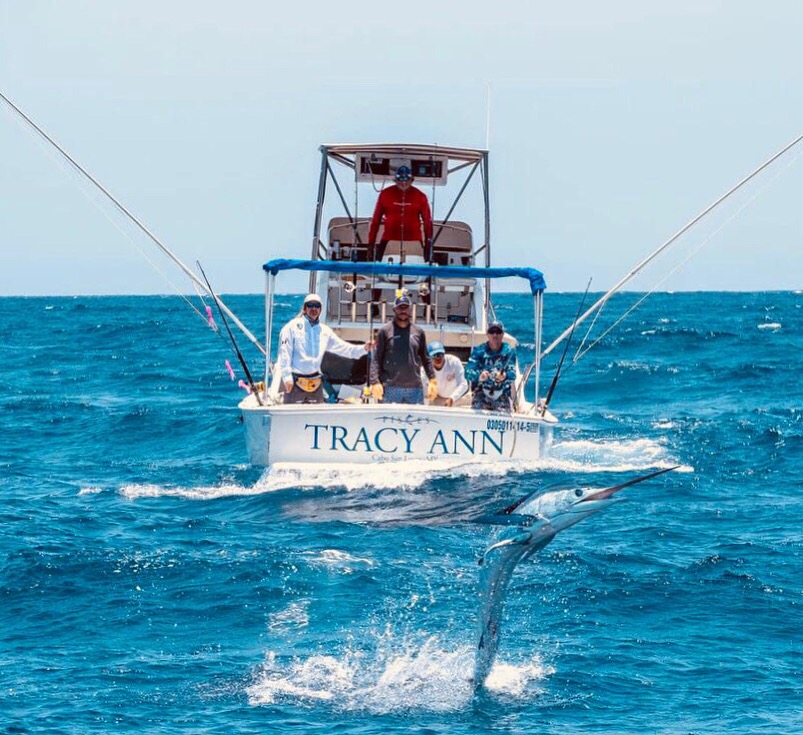 I have so much to report this week, but I will try to keep it as concise as possible, because I could write a whole book just based on this week’s happenings. I could just say it with this: A Staggering 263 Striped Marlin were caught by Pisces boats this week and ALL were released! – but I’ll expand of course.  We had two tournaments take place, the 79th Annual ILTTA Tournament (International Light Tackle Tournament Association) and the start of the Pelagic Triple Crown Tournament. We are proud to report that three of our boats placed in both tournaments, with Pisces 31′ Tracy Ann taking 2nd place in the ILLTA and Pisces 37′ Tag Team III taking 2nd Place in the Tuna division of Pelagic, along with Pisces 72′ Tag Team taking 3rd in the Billfish division. We are also happy to announce that all seven of our Pisces boats placed in the top 10 of the ILTTA Tourney. Outside of billfish, dorado and tuna were very slow, although we did see two big tunas caught by boat Retriever and another out on the East Cape by Van Wormer fishing; the tuna were 257 lbs and 234 lbs respectively; showing size that the big tuna bite may start soon. The only dorados caught this week were too small to keep.

One of the best days for our boats in the ILTTA was for Pisces 42′ Yahoo which caught and  released 9 Striped Marlin for anglers Wayne Six, Roger Galindo and Diego Men?ndez on the kickoff day of the tourney. The All Release Tournament came into being in 1946, founded by Dr. “Doc” Roy B. Dean. At inception, the tournament was met with some trepidation in view of the fact that tournaments in that day and time were all “on the dock” or “kill” tournaments. Doc’s idea was to have competition between teams of three individuals representing clubs all fishing under IGFA rules. These three-man teams would fish separately; changing boats and partners each day of the tournament. It obviously was a superb idea since it is still going strong. The anglers’ skills are put to the test, as specific rules such as same tackle, hooks and bait are utilized by all. the participating Pisces boats all used ballyhoo bait to catch and release marlin and most fish were found between Cerro Colorado are and the 11:50 Spot. 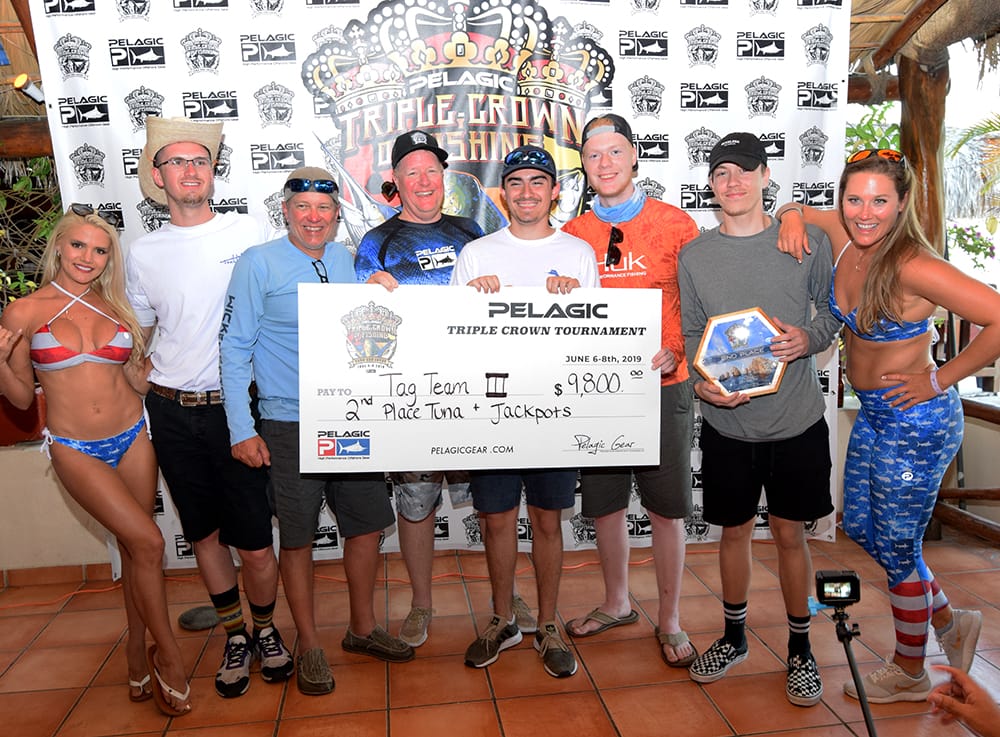 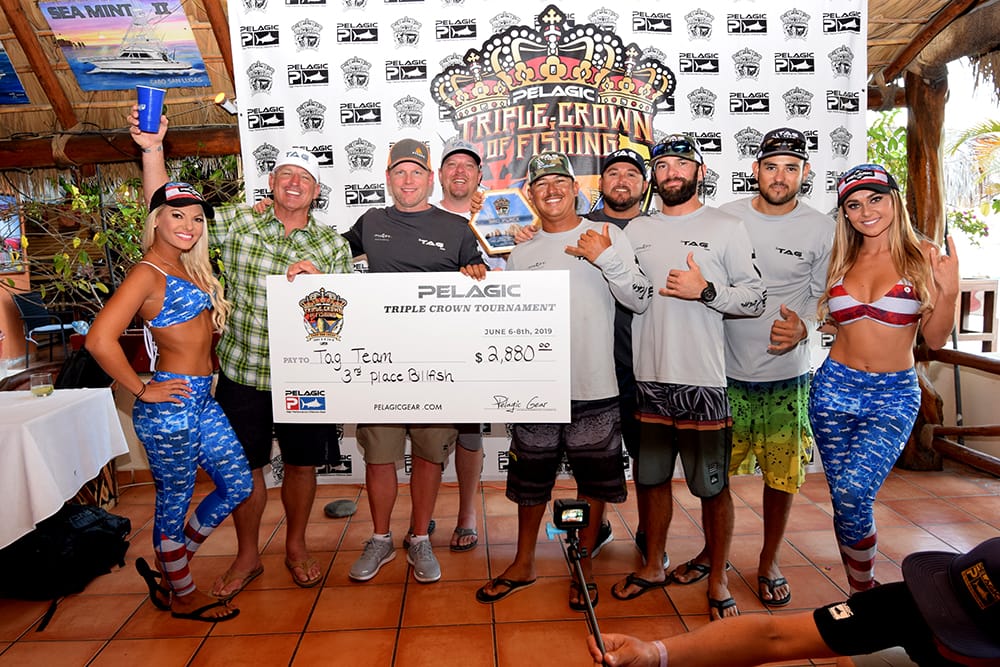 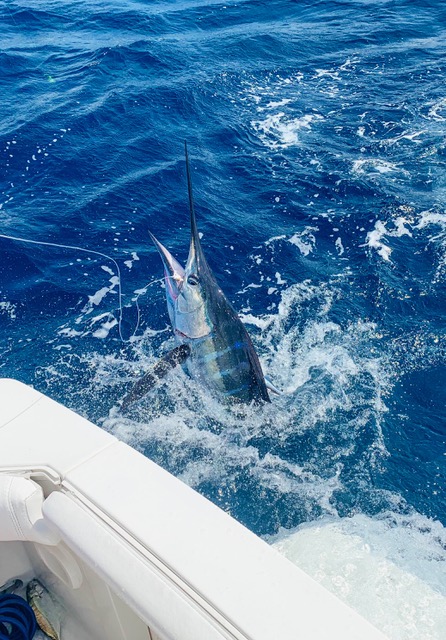 1 of 5 Striped Marlin released by Taylor and John Gevelinger  On Pisces 30′ Karina -Picture by Taylor.

Other Pisces boats not participating in the tournament did very well this week too. Pisces 30′ Karina (a Bertram Moppie) had 100% Catch Success rate this week, and totaled 20 Striped Marlin released over the 4 days it fished! One of the top days for Karina was June 5th with 7 Striped Marlin released for anglers Charlie Hebert, Chase Dardar, Griffin Lewis, Kenneth Duhon, Leon Indovina. from Madisonville, Louisiana. They used live caballito bat and lime green lures at the 11:50 Spot.

The next day, again on Karina, John and Taylor Gevelinger from Texas caught and released 5 Striped Marlin of about 100 to 130 lbs each on petrolero lures and dead bait at the 11:50 Spot. 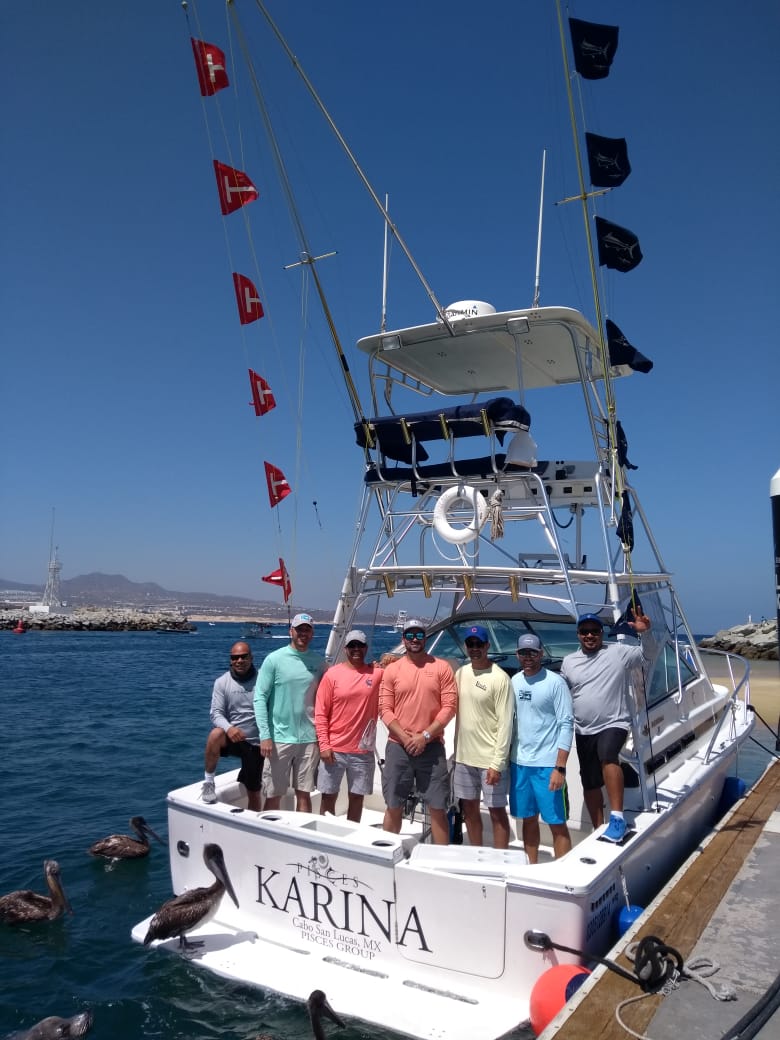 Pisces 31′ Tiburon and one of our favorite long time clients’, (fishing with us about 25 years now) Dr. Rick Walsh, took out his 12 year old grandson, Liam Walsh, who caught and released 5 Striped Marlin himself! The crew used live caballito bait for all catches, with marlin weighing between 100 and 140 lbs each at the 11:50 Spot.

Pisces 42′ Hot Rod did well this day too with 5 Striped Marlin released using caballito and ballyhoo bait, with marlin weighing between 60, 100 and 150 lbs each. Fish were caught between Chileno and Cerro Colorado. 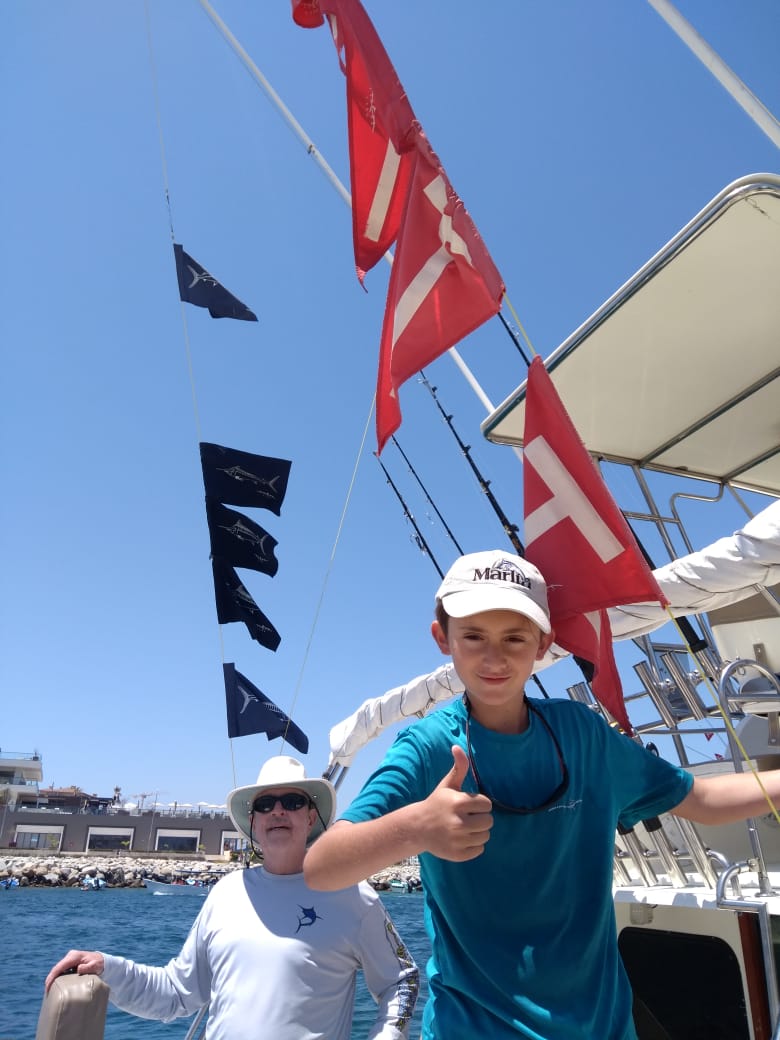 Another 5 Striped Marlin were caught and released on Pisces 35′ Valerie  by the Lomeli, Pajon and Croat families from santa Rosa, CA. Their marlin weighed between 70 and 120 lbs each, and were caught using live and dead caballito bait at Cerro Colorado.

Pisces 35′ Bill Collector 2 did well with the only wahoo caught by our boats this week, a 25 pounder that hit on a purple lure out at Destiladeras on the East Cape. Anglers from Louisiana  also released 2 Striped Marlin between the 11:50 and Punta Gorda on ballyhoo bait. 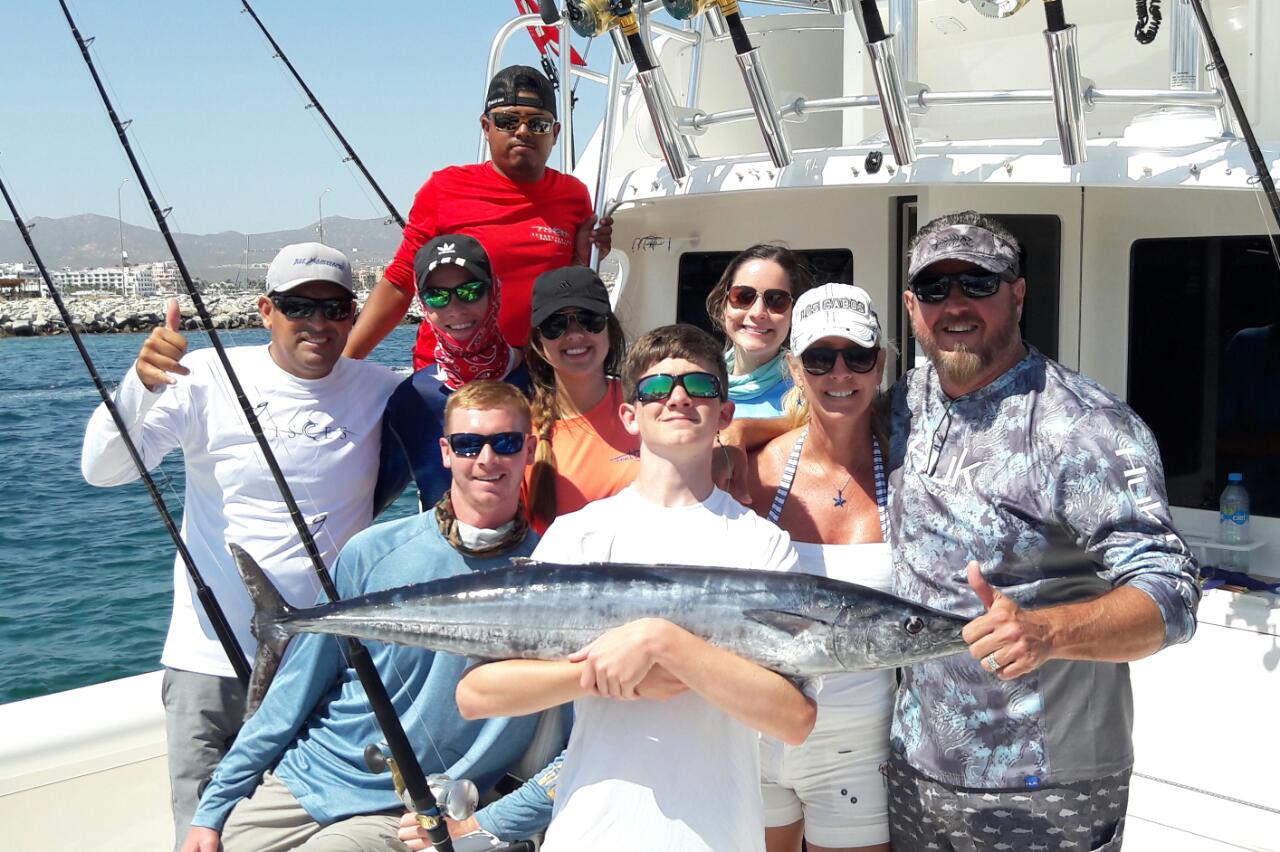 Tuna this week were only caught by Pisces 31′ Ruthless who went the distance to find anglers what they were searching for. Anglers Gary and Sam East caught 16 yellowfin of about 10 to 25 lbs each, which hit on cedar plugs on their way to the Cabrillo Mount (40 miles).

Small game consisted mainly of Sierra Mackerel, with grouper and jacks sprinkled in. Pisces Super Panga 27th Tres Amigos did well beginning the week with 3 sierra mackerel of up to 8 lbs, which hit on green hoochis and 3 Jack Crevalle released. Anglers Elena Gonzalez, Jason Reichert and Mar Echave also kept 2 nice Red Snapper for dinner which weighed about 15 lbs each. All fish hit at Pedregal area. 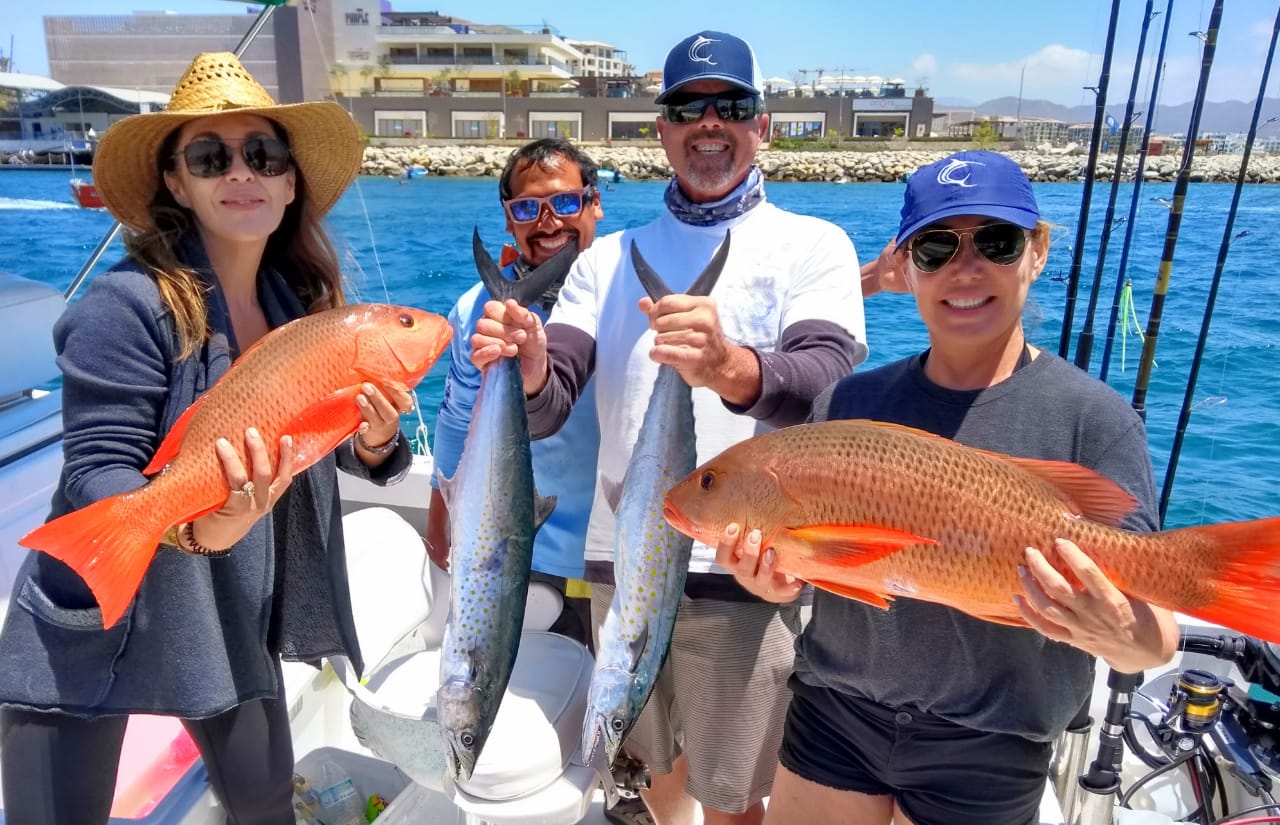 WEATHER CONDITIONS: Pacific very windy passing old lighthouse with winds up to 20+ knots on that side. Sea of Cortez calmer in all respects. Seas of 2-3 ft average.

AVERAGE WATER TEMP: Temperatures varied from the Pacific to the East Cape side,