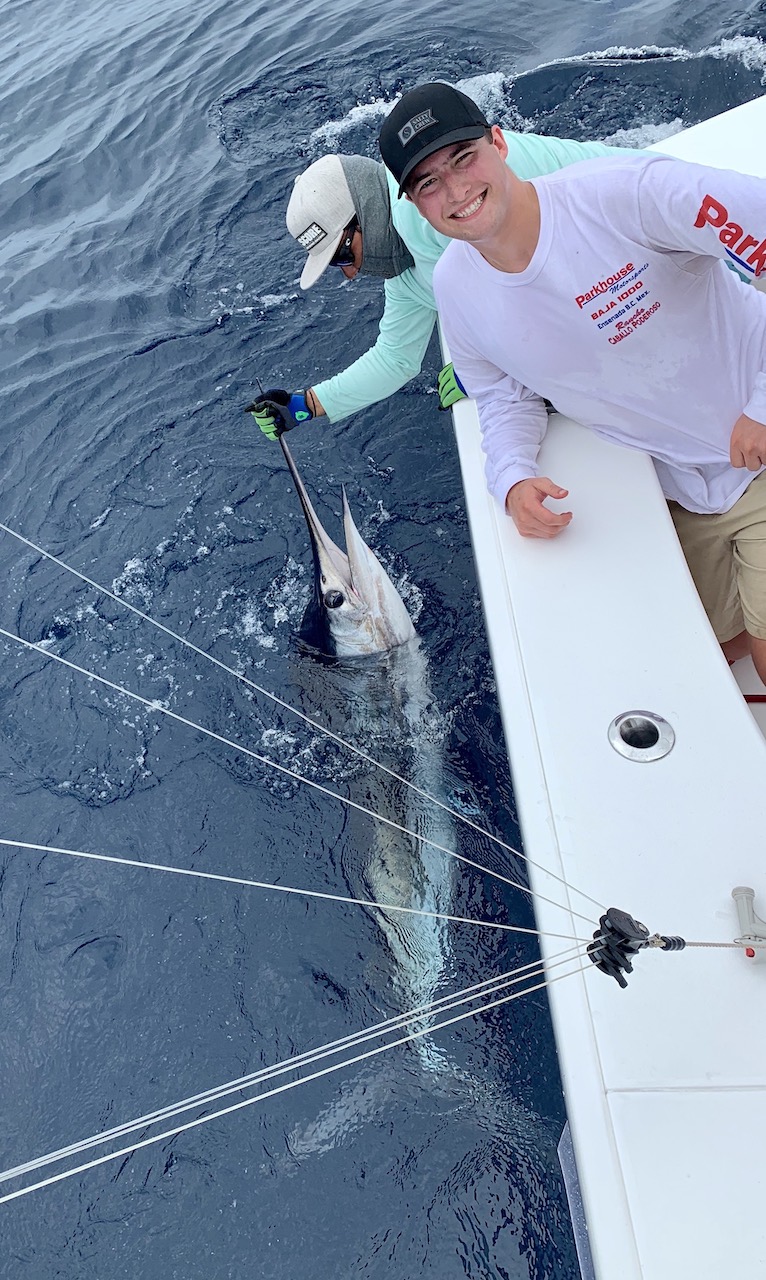 Striped Marlin released on Pisces 45′ Chasin’ Tail, 1 of 4 this day

Only 12 boats out this week, but still, fish for everyone, with 100% catch success rate. Marlin picked up heading into the weekend last week, and then slowed, only to be back again this weekend. Top Marlin Release boat this week, Pisces 35′ Bill Collector 2, went 5 for 7 on Striped Marlin released in one day. They also targeted Yellowfin, which are finally showing up, and landed 7 of them total. Other boats fishing the area nearby to 35′ Bill Collector 2 this same day also did well with Marlin. For example, Captain Ty Valli of the 64′ Chupacabra reported 17 for 26 on Striped Marlin released hitting on ballyhoo; and the custom built 77′ Merrit, Artemis, which just arrived in Cabo, went 16 for 23 released. Pisces 45′ Chasin’ Tail 2 landed 17 Yellowfin and released 4 Striped Marlin this Saturday as well. Most tuna averaged 10 to 35 lbs. In our “Other” category, we have some BIG Roosterfish (around 40 lbs) taking the cake once again this week, with a few Sierra Mackerel and Yellowtail sprinkled in too. Plus, we got news of an approx 300 lbs Grouper caught by commercial fishermen out of Punta Lobos, Todos Santos. 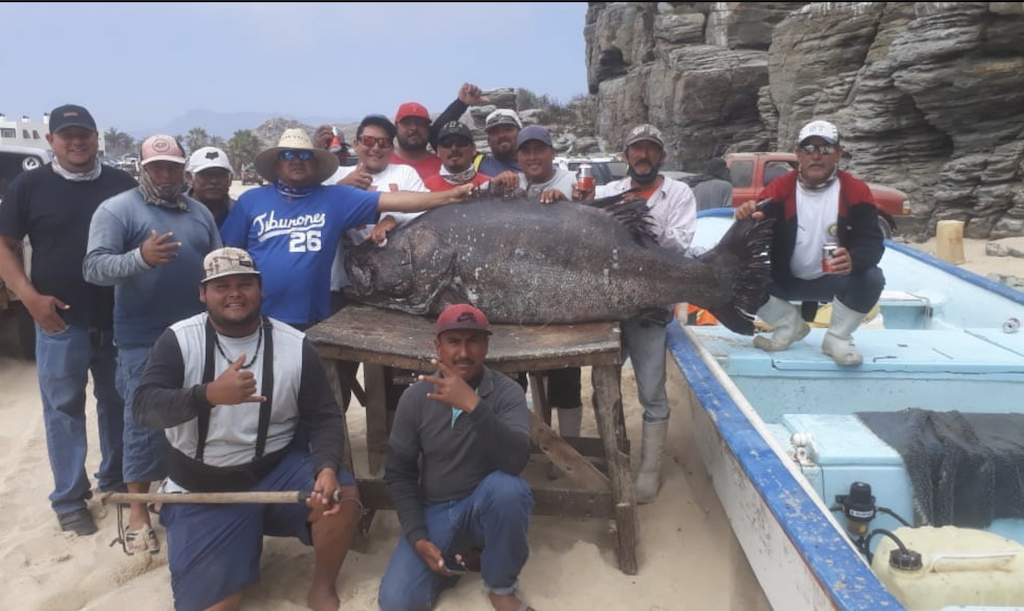 June 22nd started off our week with Pisces 31′ Rebecca going 3 for 5 on Striped Marlin released for anglers George and Ryan Hurley and Nathaniel Mullen. They headed out close to the 11:50 Spot and used caballito bait to land the fish, which were between 80 and 1220 lbs. 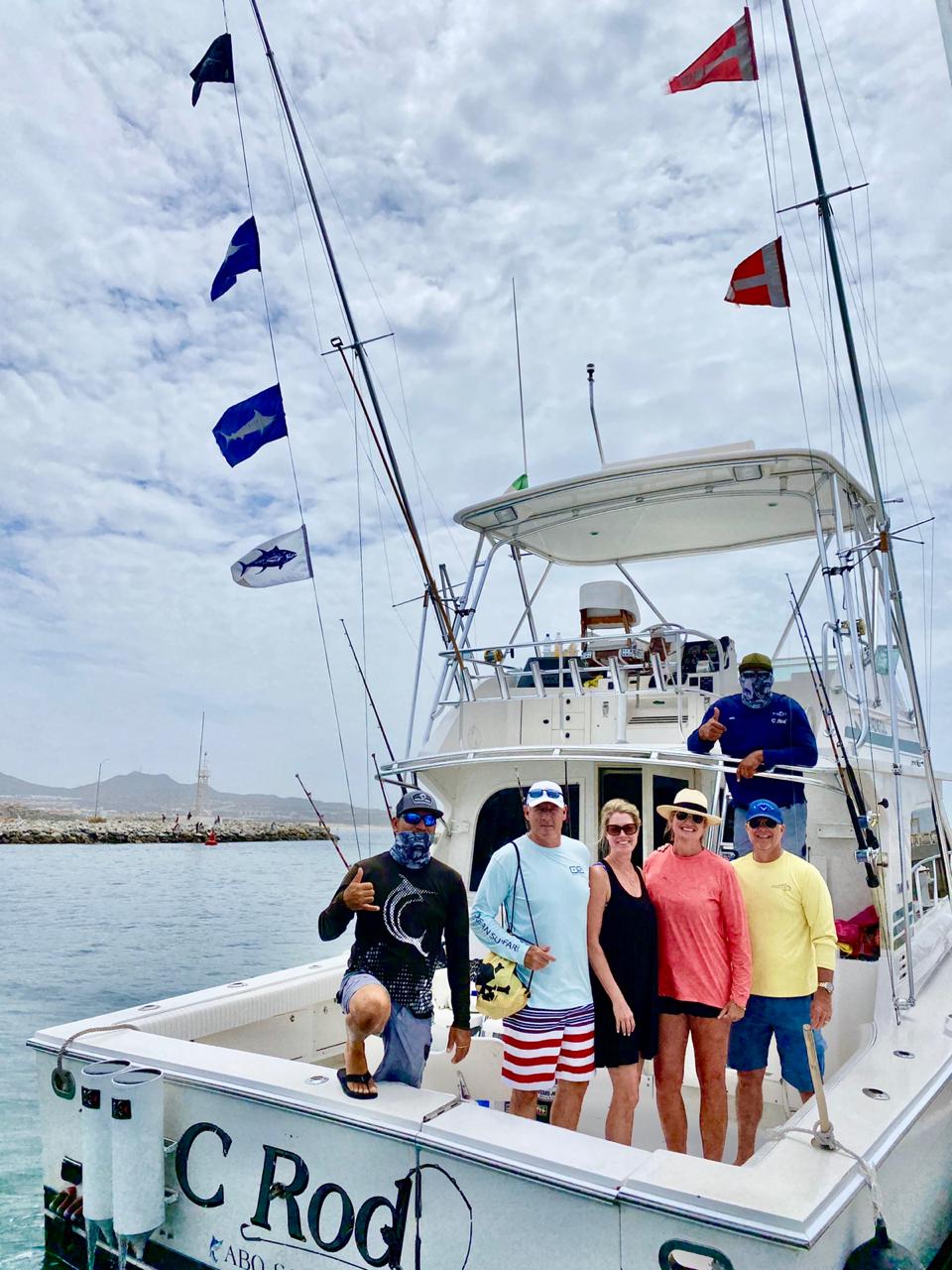 Pisces 38′ C Rod, pulls of a great half day with 4 Striped Marlin released and a YFT!

Pisces 35′ Bill Collector 2 used ballyhoo and caballito for their marlin catches as well, close to the 120 Spot (20 miles out). The tuna were found with porpoise and hit on cedar plugs a bit further. Anglers were Robert Clay, Matthew Marion and Mike Martin from Houston, TX. 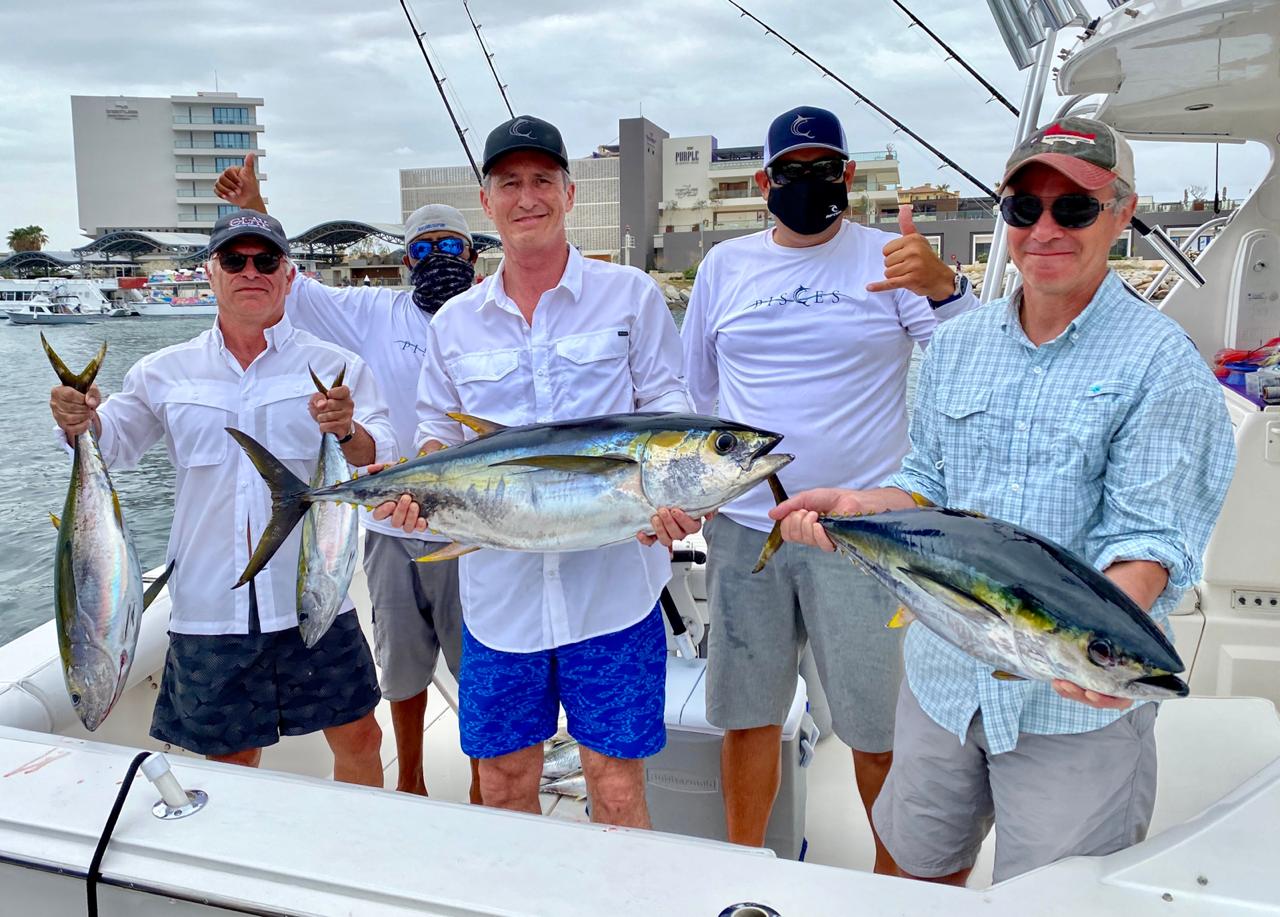 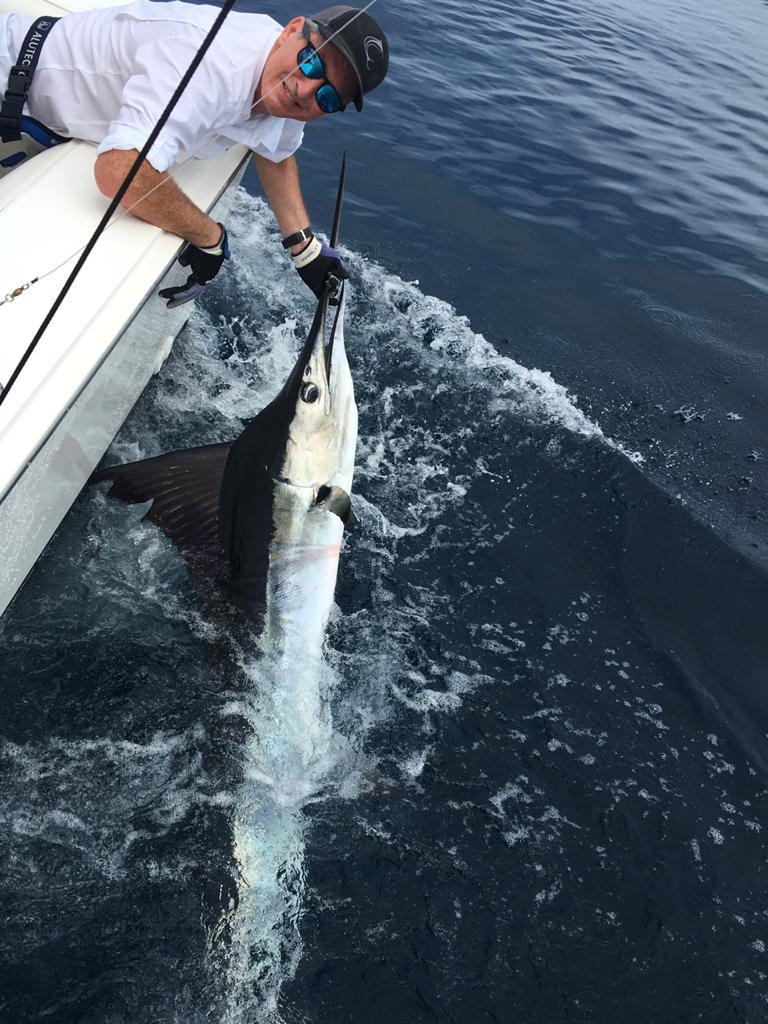 Pisces 38′ C Rod has a great half day too, with 3 Striped Marlin between 100 and 140 lbs hitting on live caballito bait, safely released. The Dove and Farr families from Dallas, also kept a nice Yellowfin for dinner, of approx 20 lbs on a hoochi lure. They fished a few miles out of Chileno.

And again this week, the new Viking made vessel in the fleet, Pisces 45′ Chasin’ Tail 2 with Captain Pepe de la Pena (Captain on 40′ Chasin Tail as well), caught and released a nice Roosterfish, estimated at 40 lbs. The roosters were quite tough to land this day, they went 1 for 5, but one was enough! They took caballito bait and mullet (lisa) close to the old Lighthouse. 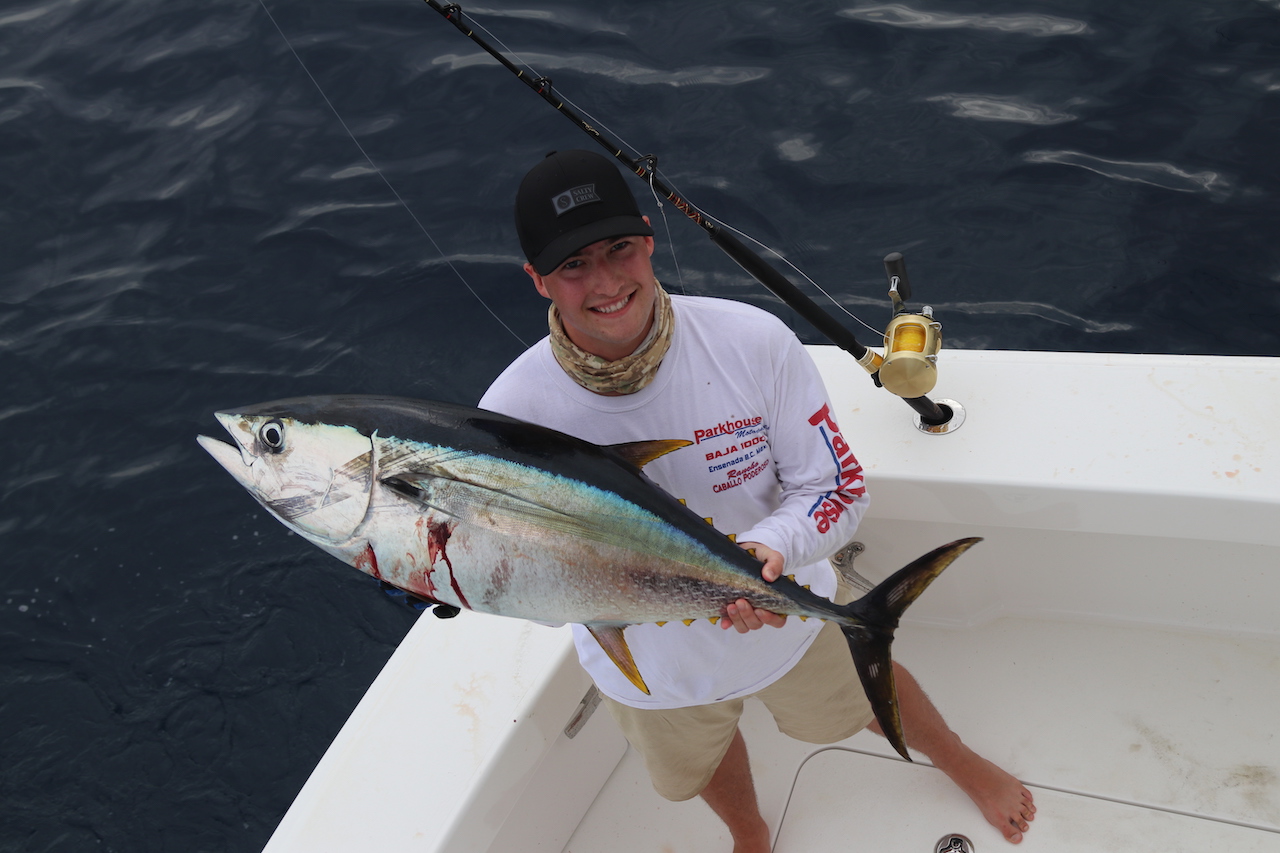 And as mentioned previously, Pisces Chasin Tail had a great week with Marlin, 5 total released this week, along with 17 yellowfin. Marlin averaged at around 100 lbs each and hit on lures and dead bait out of the 95 spot. Yellowfin hit on feathers and cedar plug lures, for mom and son anglers, Ashley Winnie, Trent and Trevor and friend Turner Collins, from Reno, Nevada. 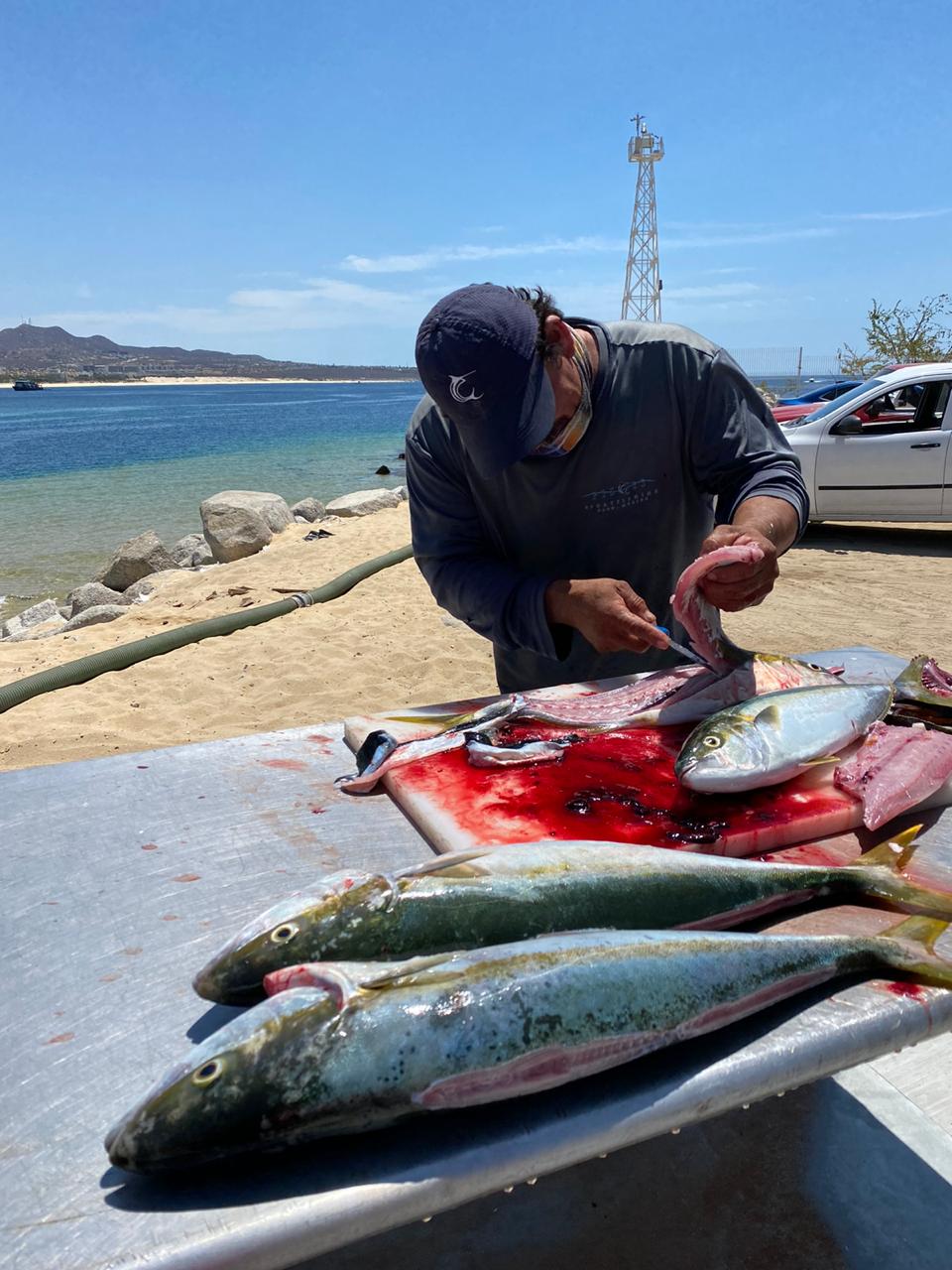