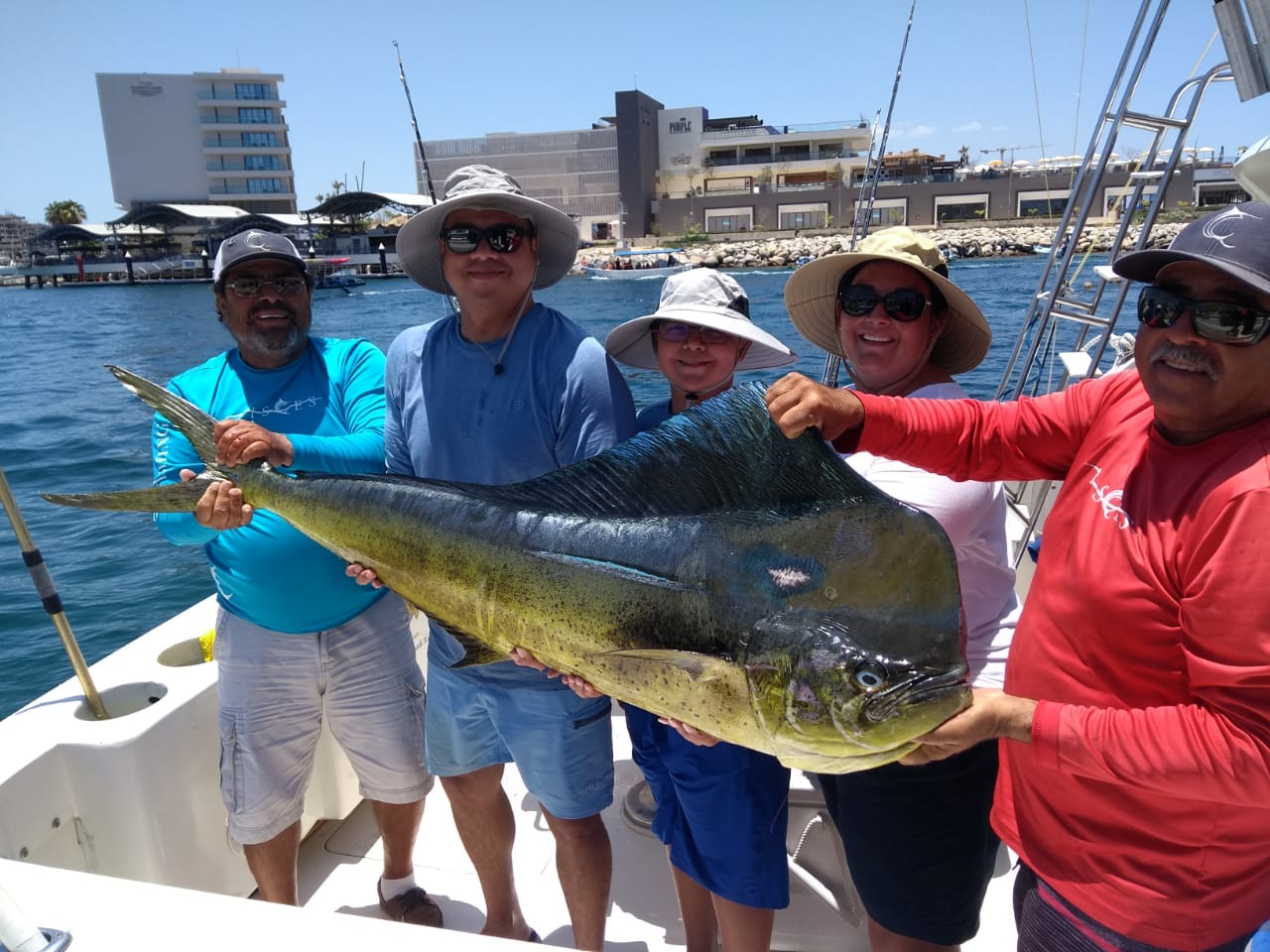 Warmer water temperatures on the Cortez and Pacific brought some good fishing in the first few days of the week. We saw anglers heading out to find lots of tuna, some marlin and landing a few dorado per boat, even if some were too small to keep and others, like the 56.7 lbs Trophy Bull Dorado caught by Rudy Mendoza on the Pisces 35′ Valerie impressed at the dock. Pisces 31′ Rebecca also came back last Monday with a very nice approx. 50lbs Wahoo, making it seem that this week was going to be one of our best so far. But, as fishing would have it, it began to get a bit more inconsistent come midweek, and crews had to work very hard to find and land the fish, as we had some picky eaters. With that said, the Pisces 31′ Rebecca still managed to catch and release 5 striped marlin at Destiladeras in one day and we saw some Blue Marlin start to show up too; all released and mostly around 200 to 250 lbs each. We had seven blues and 49 billfish caught total for the fleet this week, along with 160 yellowfin tuna. Inshore fishing included grouper, jack crevalle, triggerfish, and a couple of roosterfish.

Angler Rudy Mendoza weighs his Trophy Dorado, wife Christine also released her 1st Striped Marlin aboard Pisces 35′ Valerie.
Pisces 35′ Valerie had a great day with anglers from Texas, Christine Solis-Mendoza releasing her first striped marlin of about 80 lbs at the 11:50 on a “cosinero” lure. Her husband Rudy closed out the day with a 56.7 lbs Dorado that also hit on a cosinero at the 11:50.

Pisces 31′ Rebecca did well off of the Cerro Blanco area, about 35 miles out, catching and releasing a striped marlin of about 120 lbs on a tigrillo lure. They also caught an approx 50 lbs wahoo there on lure, for anglers from Kentucky: Valinda and Walter Weibel. 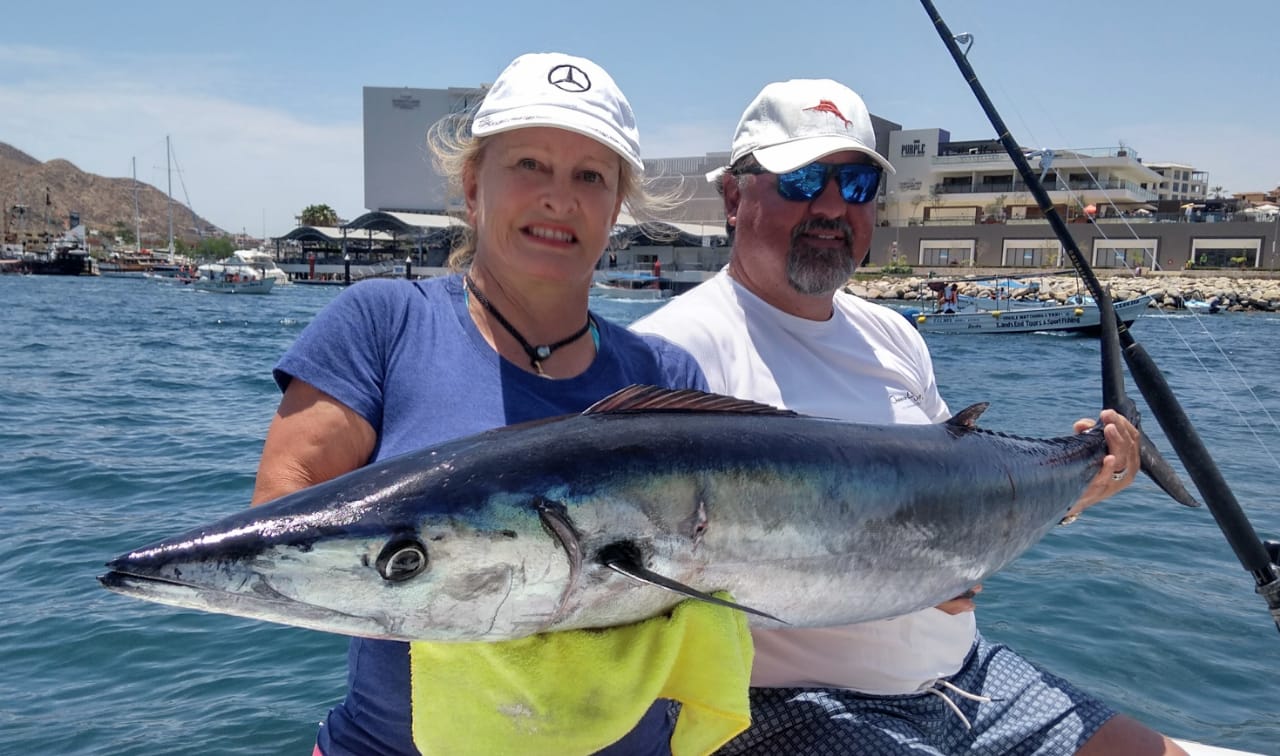 Anglers from Kentucky, Valinda and Walter Weibel, with their approx 50 lbs wahoo on Pisces 31′ Rebecca.
The next day 31′ Rebecca was the only boat to catch 5 Striped Marlin. Most other boats caught anywhere from 1 to 2 billfish, (with striped marlin being the most prominent, followed by blue marlin and even a sailfish this week). Their marlin were caught out at Destiladeras on the East Cape, some 35 miles up the coast. Two of the marlin hit on lures, a tigrillo and chiliwily, while the other three hit on live lisas. The marlin ranged from about 80 to 130 lbs each and were tagged and released by Hilda Vallecillo and Ronald Benard from Bayou Vista, Texas. 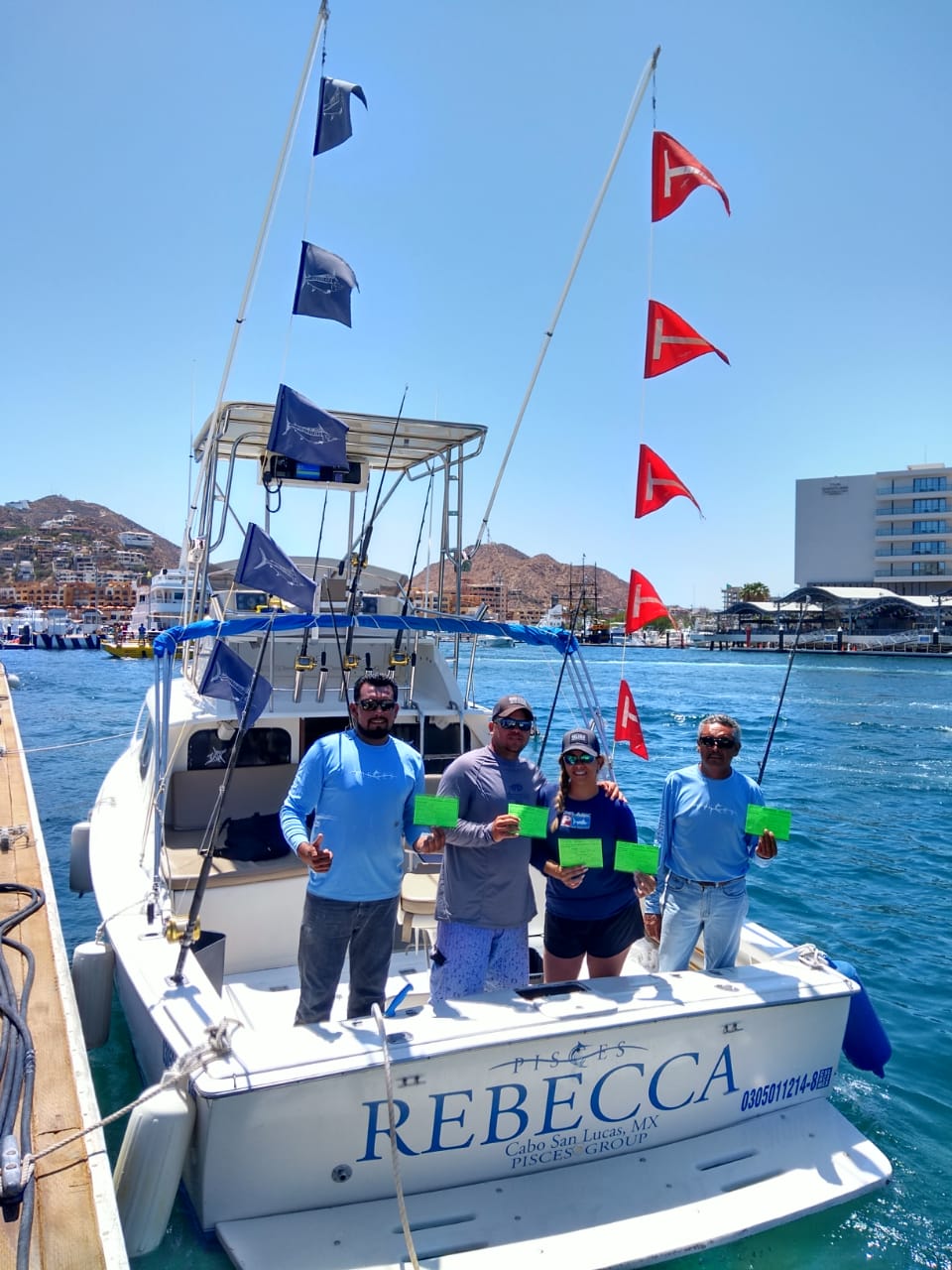 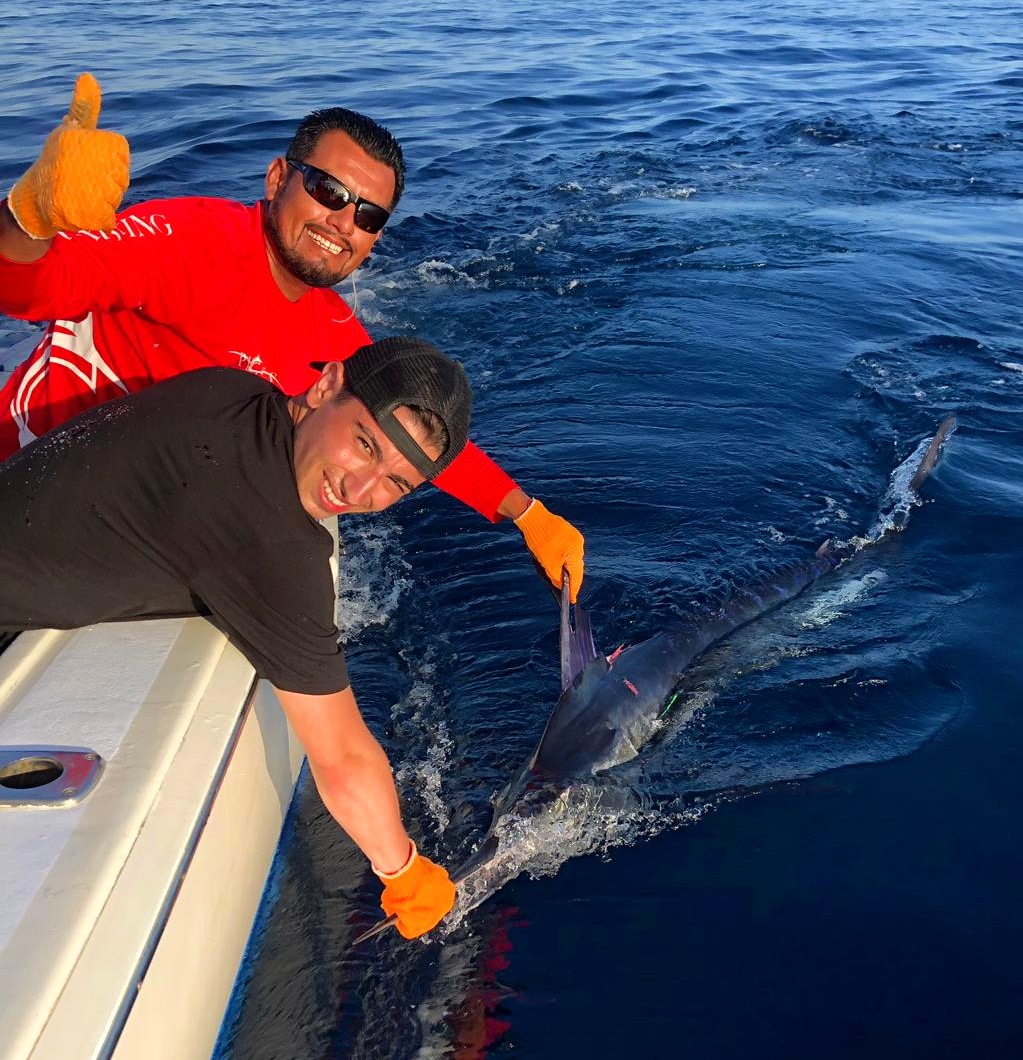 The Pisces 31′ Rebecca continued their streak by heading out for tuna the day after, and found 16 yellowfin, footballs, 37 miles out, at the 210 spot. Tuna hit on cedar plugs and feathers for anglers Becky and Neil Arunyon and Nancy and Charles Cross from Seabrook, TX.

Pisces 30′ Karina, now Captained by Orlando Murillo with Deckhand Pablo Martinez (previously Captain and mate of the 28′ Andrea) did well with tuna this week as well, landing 21 yellowfin on cedar plugs and feathers out at San Jaime for Chase and John Lorentz from North Carolina. They also caught and released 1 striped marlin of about 90 lbs which hit on live caballito bait. The guys headed out again on Karina two days later and did very well again, this time releasing 1 striped marlin at Destiladeras of about 120 lbs on live caballito and 10 yellowfin tuna on cedar plugs. 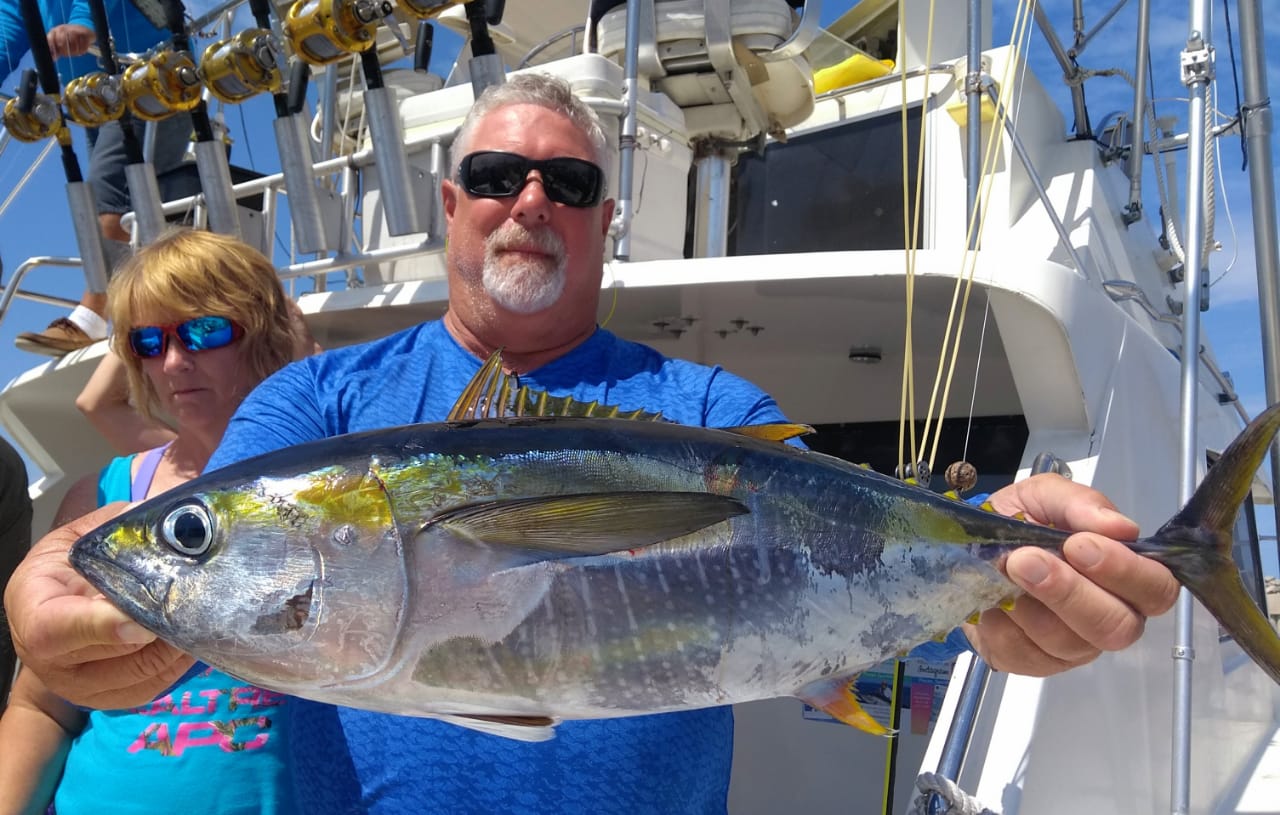 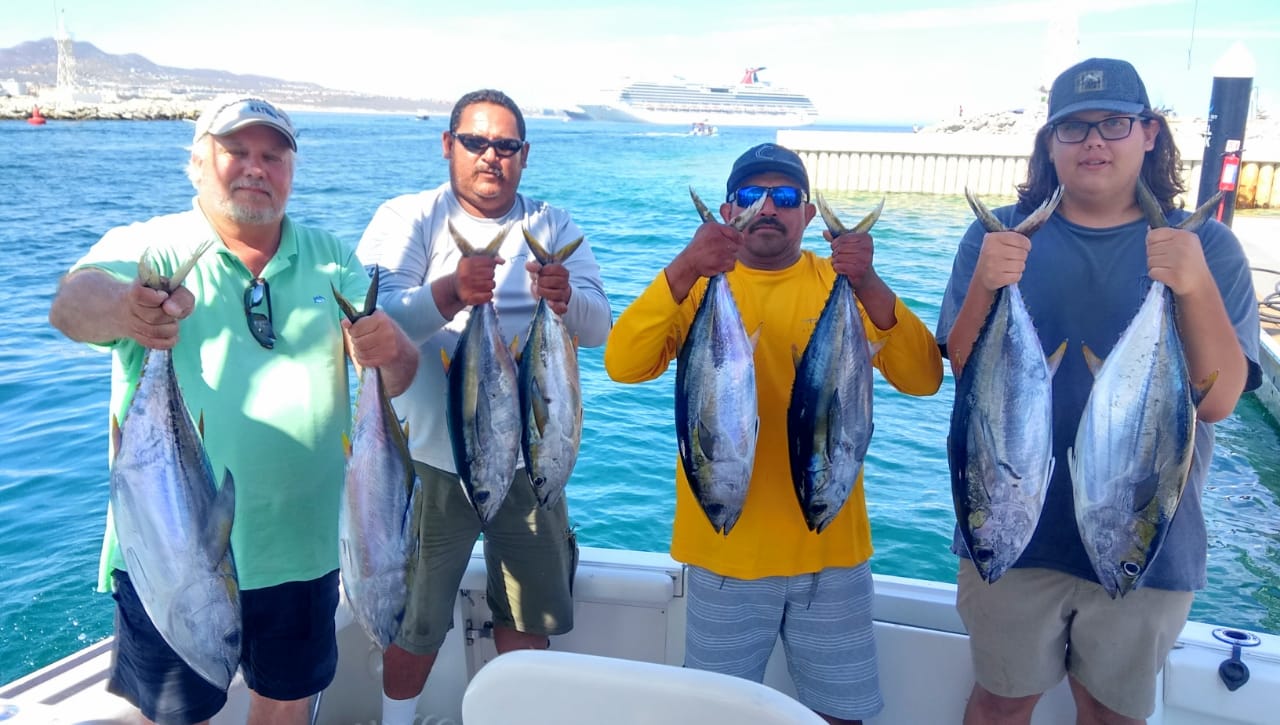 Chase and John Lorentz from North Carolina fished two days on Pisces 30′ Karina totaling 31 yellowfin tuna caught and 2 Striped Marlin tagged and released.
More tuna on Pisces 31′ Tiburon, they caught 18 yellowfin total for anglers from Maryland, on cedar plugs and feathers about 30 miles South of the Old Lighthouse. Next day, 2 yellowfin for anglers the Mayer family from Wyoming who also caught 4 dorado, of which they released the smallest, and kept only those about 10 lbs.

July 10th Pisces 31′ Ruthless and anglers David and Wesley Starr had a great day with 1 Striped Marlin of about 100 lbs tagged and released, which took live caballito bait. They tagged and released a Blue Marlin of about 250 lbs, and had a BIG dorado on the line, of about 50 lbs, but lost it just at the boat. Still, and extraordinary day out on the water for these guys. The next day the Pisces 31′ Ruthless managed to keep their dorado, this time landed at San Jaime on dead caballito and also released 2 striped marlin between 100 and 160 lbs.

More marlin for Pisces 38′ C Rod, with return anglers Colin Soar and John Sixsmith from England releasing 3 Striped Marlin between 90 and 150 lbs each. The fish took 2 live Lisa baits and hit on a trolled ballyhoo about 23 miles to the 130 Spot. The friends fished another day aboard 38′ C Rod and released 2 striped marlin, this time about 100 and 120 lbs each, and hitting on a black/red lure and live caballito almost 37 miles out to the 200 Spot. They also caught 2 yellowfin tuna 10 -15 lbs on guacamayo lures. 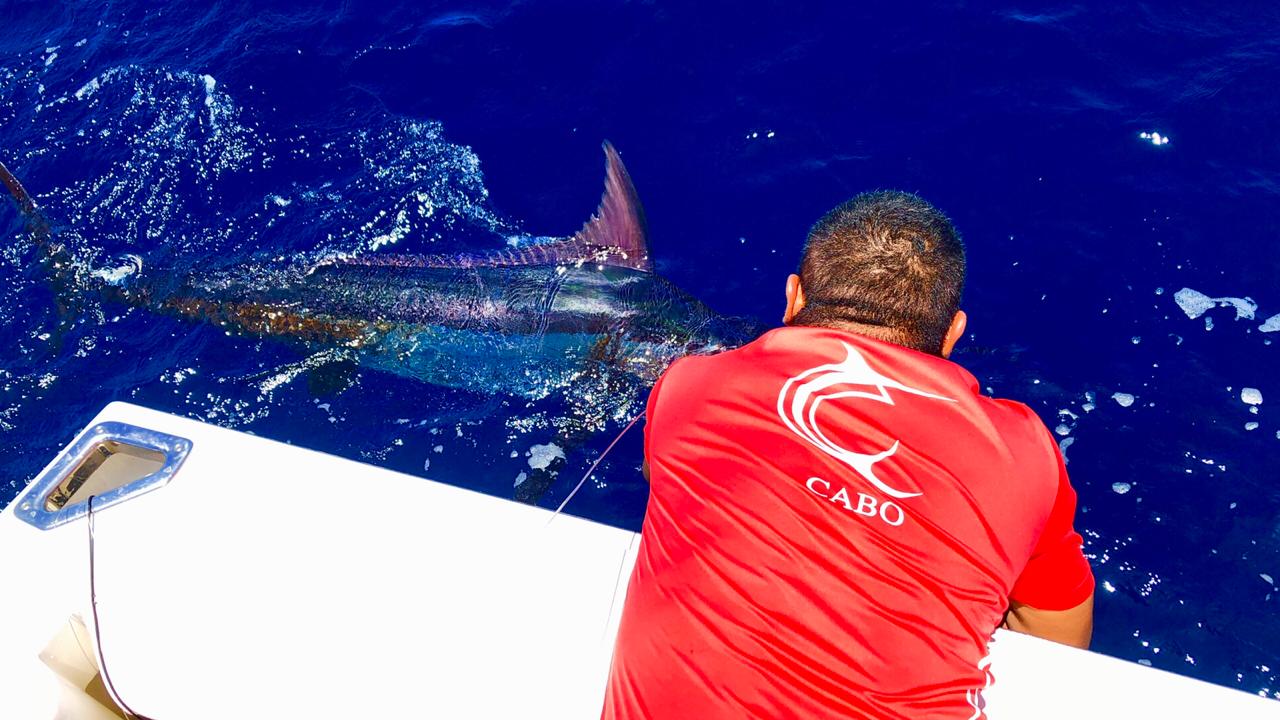 Last but not least, Pisces 60′ Reel Machine released a nice blue marlin yesterday, of about 220 lbs at Los Arcos where they also released 1 of 2 jack crevalles of about 15 lbs. Anglers from CA also caught 12 triggerfish. 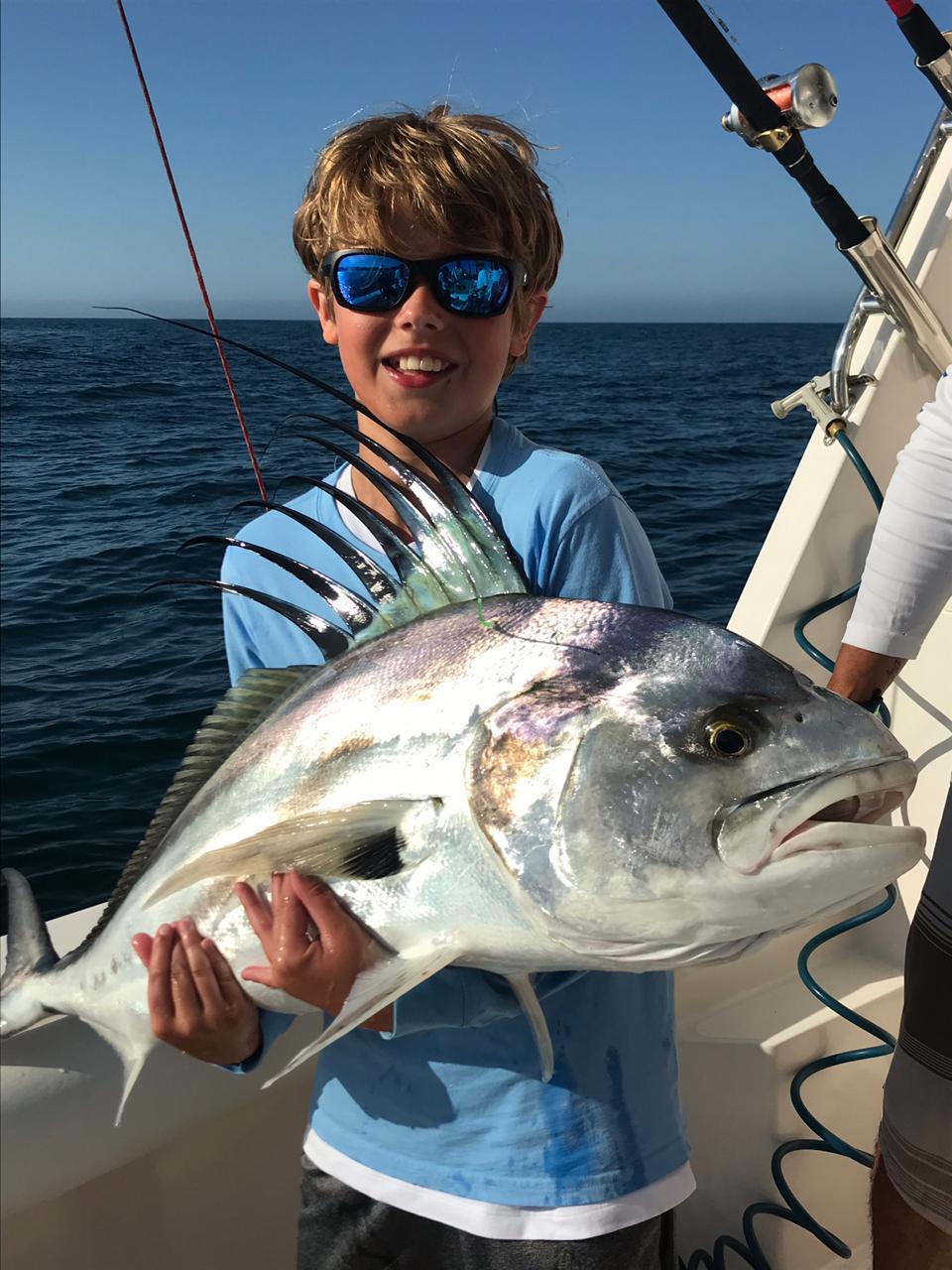 Pisces 42′ Caliente did well inshore, with kid anglers John McMahon and Brad Dunlap from Oklahoma releasing two big roosterfish, approximately 35 and 45 lbs each, which hit on lisas at Los Arcos. The kids both tagged their rosoterfish upon releasing them. To find out more about our Tagging as a Research Center for GrayFishTag Research head to their web www.grayfishtagresearch.org. 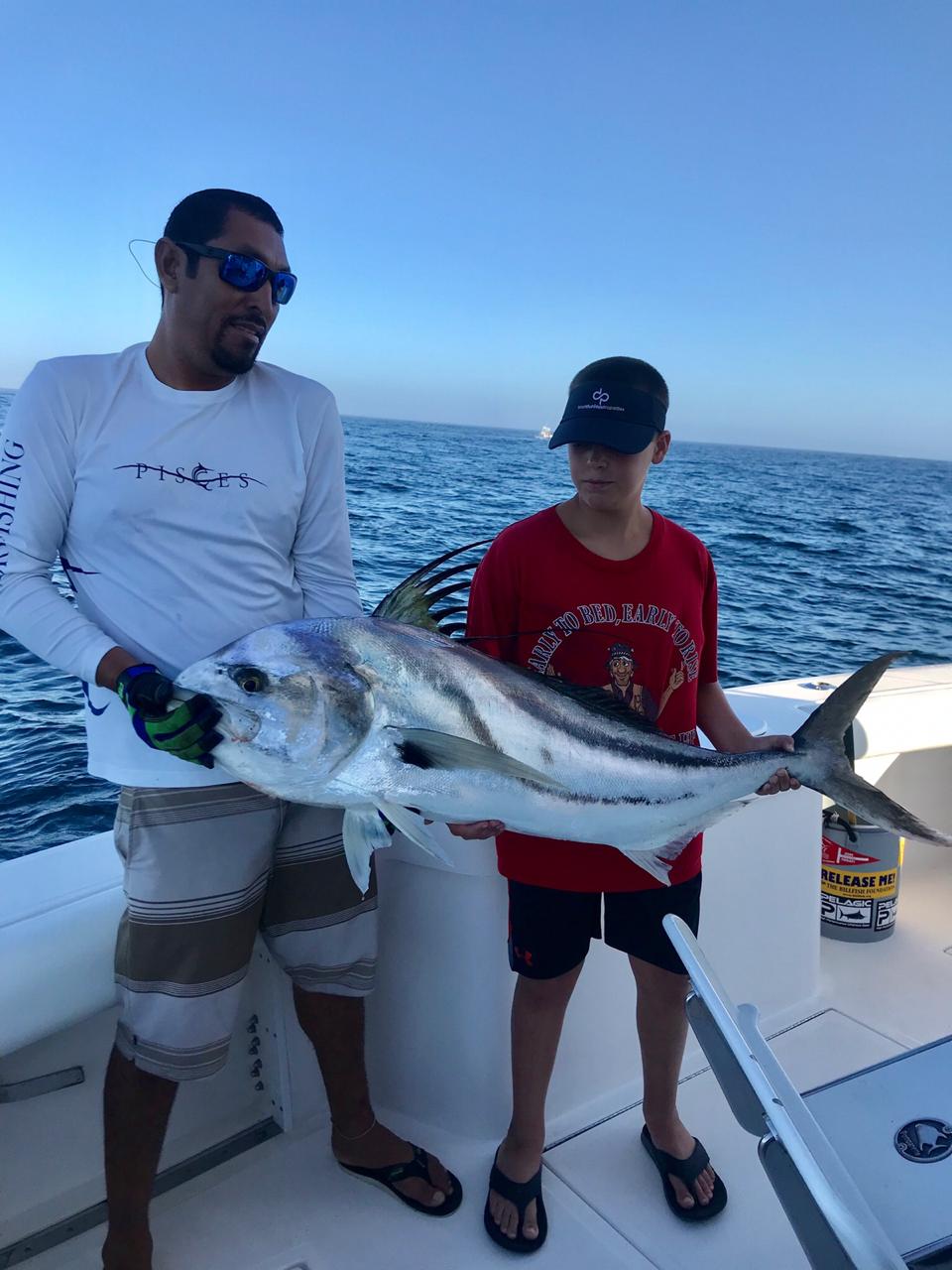 —–
Based on the catches of Pisces Sportfishing Fleet, written by Rebecca Ehrenberg.
Share this article