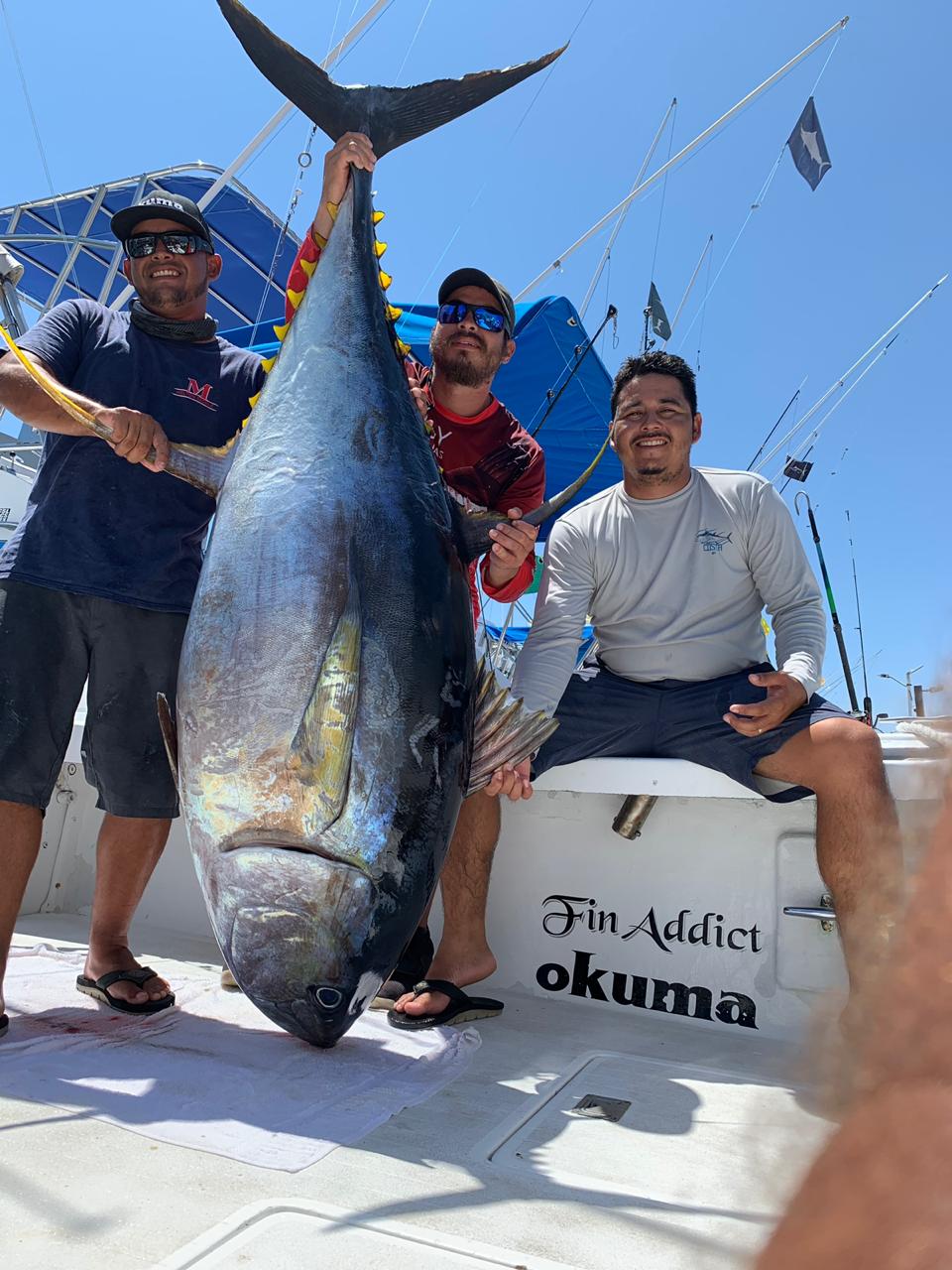 The Blue Marlin are definitely showing up in Cabo now, and that’s not the only species we’re happy to see. The yellowfin tuna numbers have stepped up nicely, including a report of a BIG Yellowfin, which weighed in at 254 lbs, caught by Fin Addict yesterday – keep reading for full details on capture (WON Tuna tourney can’t get here soon enough!). All Blue Marlin caught have been between 200 and 250 lbs each, found at the 11:50 and 130 Spots mostly and hitting on lures (purple, gaucamayo). Pisces anglers released a total of 55 billfish this week. Plus an incredible Billfish Grand Slam by anglers Calvin Warriner and Calvin Warriner III from Colorado aboard Pisces 31′ La Brisa, tagging and releasing a Sailfish, Striped Marlin and Blue Marlin, they also added some tuna to the mix, just in case their day wasn’t epic enough as it was. And yes, the tuna are still quite the run out, but boats looking for them have found upwards of 10 yellowfin per boat on average; with fish between 10 and 35 lbs each; and total numbers for the fleet hitting 224 fish. Dorado numbers are holding this week as well, with nice sized Bull Dorados making for some fun catches, mostly hitting on live bait. 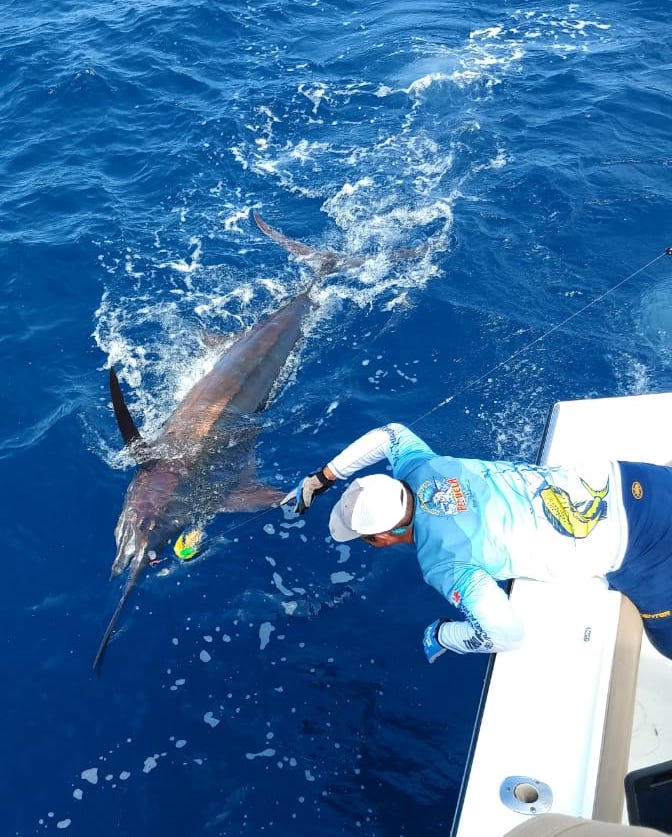 July 24th saw one of the first Billfish Grand Slam’s of the year – Anglers Calvin Warriner and Calvin Warriner III did an awesome job on the Pisces 31′ La Brisa by releasing a striped marlin that hit on dead caballito bait out of the 11:50, followed by a nice sized sailfish, about 10 lbs, also on dead caballito. Finally, an approx 150 lbs Blue marlin.The anglers did a spectacular job of tagging their marlin, re-oxygenating them and releasing them safely. A great team effort and something we are very proud to see. To top it off they found some yellowfin tuna, catching 4 total, of about 15-20 lbs each. 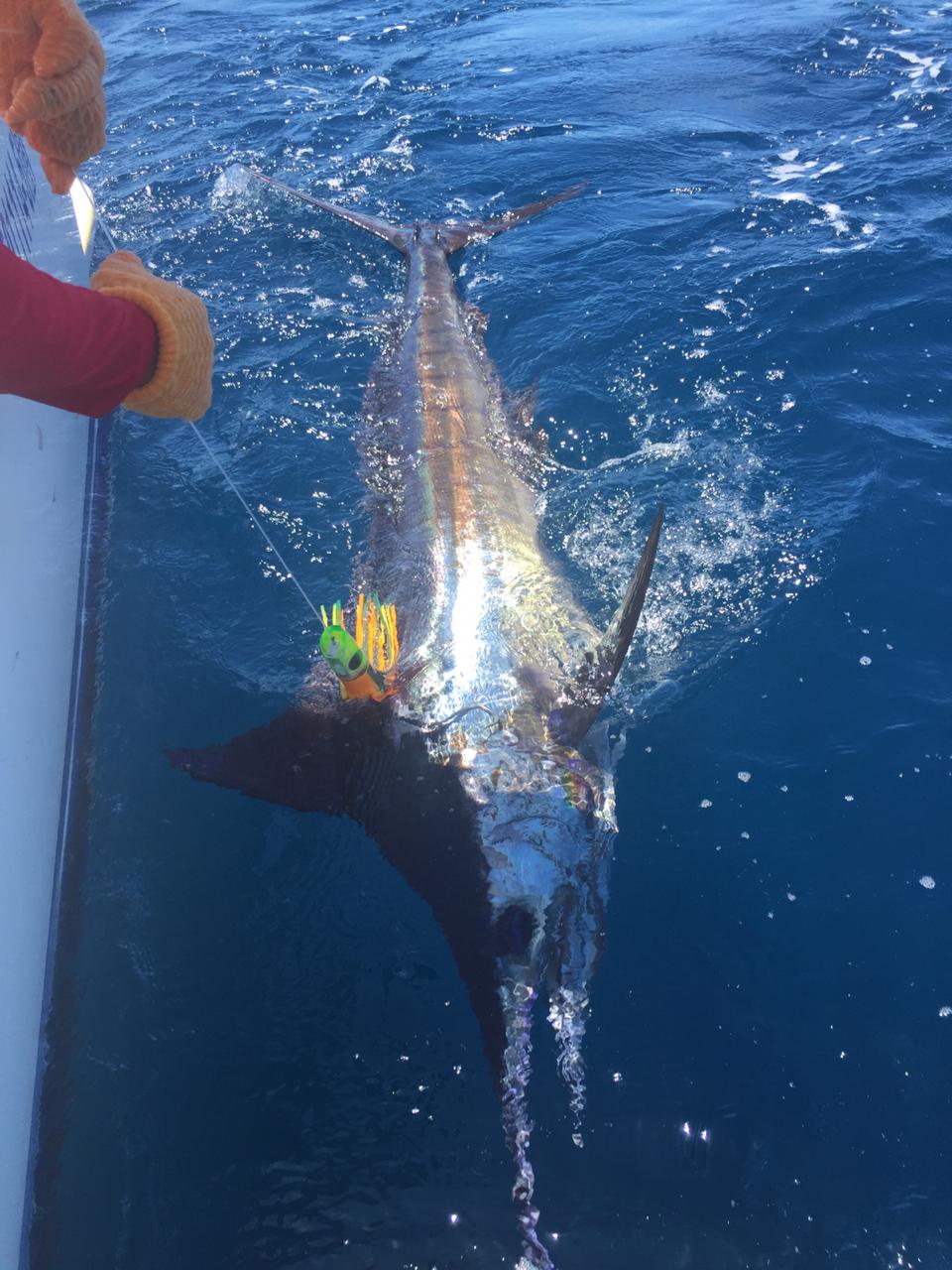 1 of 3 billfish tagged (Blue marlin) and released on Pisces 31′ La Brisa, making for a Grand Slam!

The next day, La Brisa did well again, this time finding a Blue Marlin of about 200 lbs, released, at  La Herradura, for anglers Andrew and Emily Ashikari from CA. They also caught 2 yellowfin on cedar plugs (15 and 20 lbs each).

A great day on Pisces 42′ Caliente as well with anglers releasing 4 Striped Marlin, all about 60 lbs each, hitting on 2 petrolero lures and 2 on live caballito bait at the 120 spot. 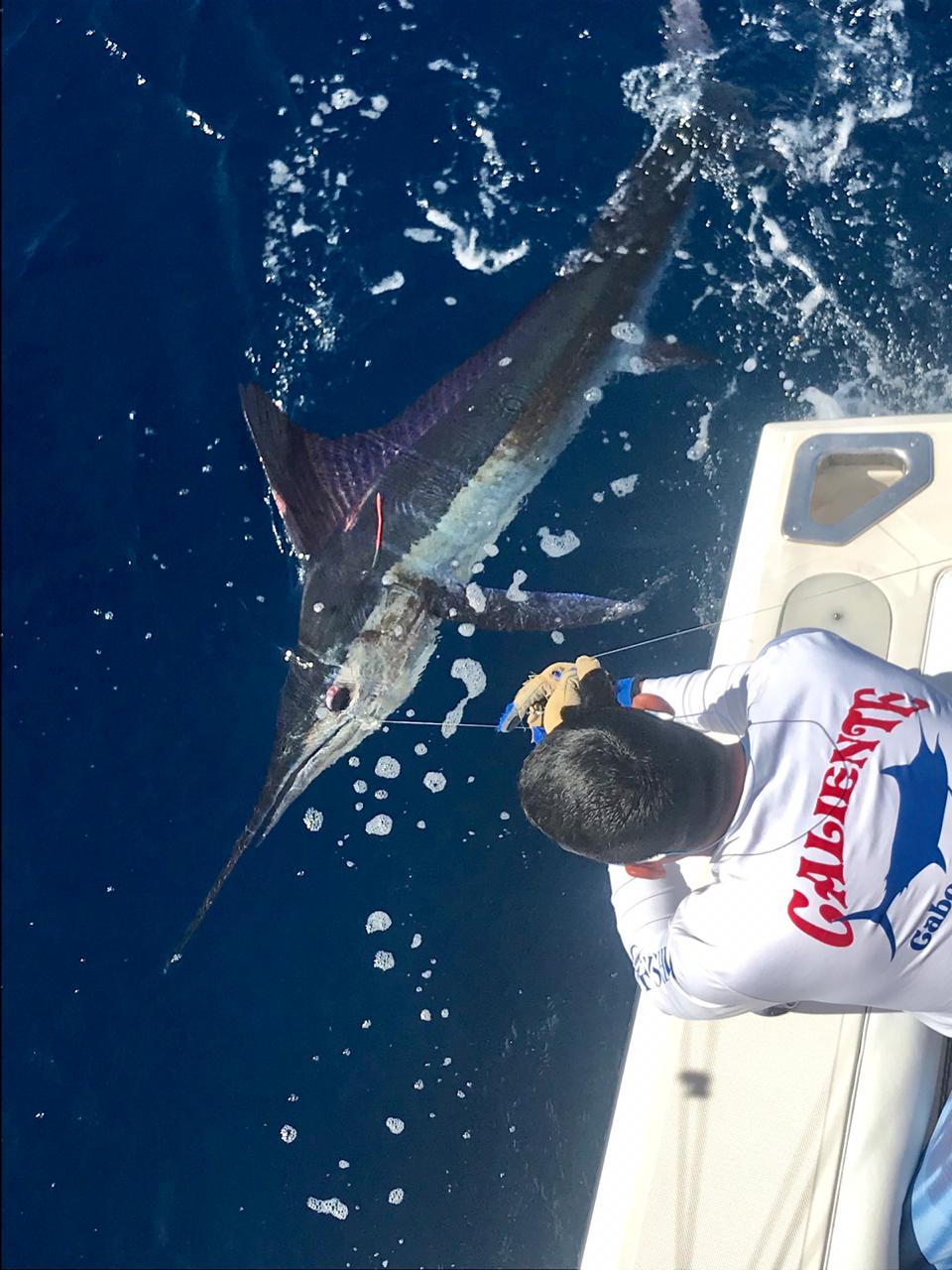 Pisces 31′ Tracy Ann also had a great week with one striped marlin of about 120 lbs that hit on live bait at the 150 spot released, and a nice 250 lbs blue marlin that hit on a guacamayo lure, for angler David Holtz from New York. The previous day, Pisces 31′ Tracy Ann also released a 120 pound stripey, which hit on live bait at the 11:50 Spot, this time for anglers from CA. They also released a 80 lbs sailfish which hit on lure there too. To top it off they kept 6 yellowfin on cedar plugs. 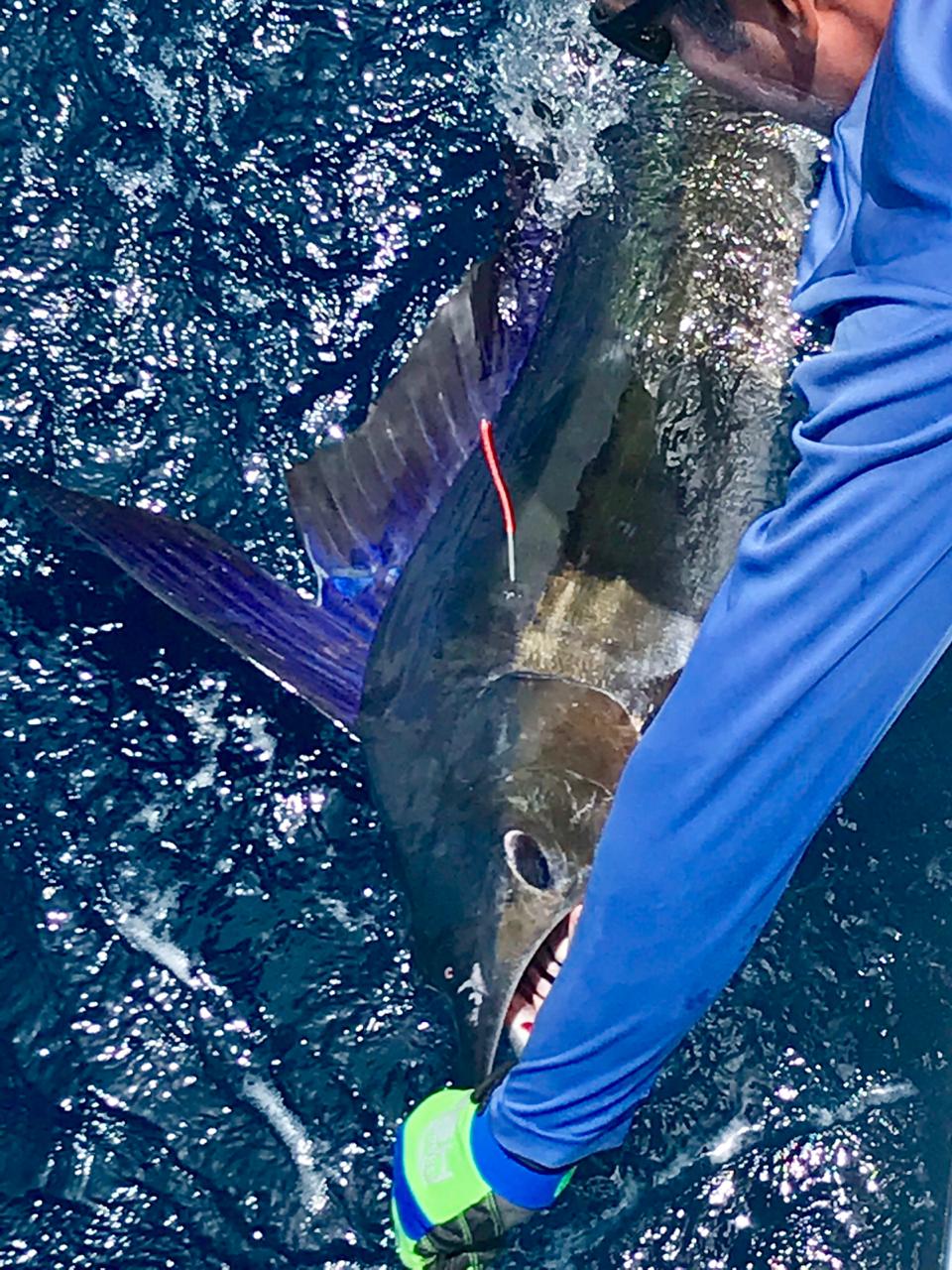 Pisces 42′ Yahoo also had a similar day with a good mix of fish caught, including a 120 lbs Striped Marlin which hit on trolled ballyhoo bait about 15 miles out of the 11:50. Then, a nice Blue Marlin hit their purple lure, and they released the approx 180 lbs fish successfully. Then some nice yellowfin, 7 in total of about 20 lbs each, hitting on cedar plugs.Anglers were Brandon, Judy, Stephane and Keith Durr, Christy Rizzo, Mark and Monica Ball and Pamella Puckitt from Louisiana. These anglers headed back out on Pisces 38′ C Rod and caught even more tuna! 19 yellowfin total, all between 15 and 25 lbs, which hit on cedar plugs and feathers out of the 11:50 Spot. They also tagged and released a small striped marlin which hit on ballyhoo bait.

And even with all these epic catches, the Pisces 35′ Bill Collector 2 definitely stood out, with consistent top notch fishing daily. For example, anglers Brandon and Nathan Plum fished July 23rd with them and headed all the way out to Destiladeras area where they found some dorado and a nice blue marlin. The guys did a nice job of tagging a small dorado of about 8 lbs and were rewarded with a nice 35 pounder in return, which they kept. Both dorado hit on caballito bait, while the Blue marlin took a lure, an approx 215lbs fish, released. The guys went out again on 35′ Bill Collector 2 and released a 120-pound striped marlin the time and an approx 250 lbs Blue marlin as well. This time they landed their fish at the Gordo Bank on dead caballito. 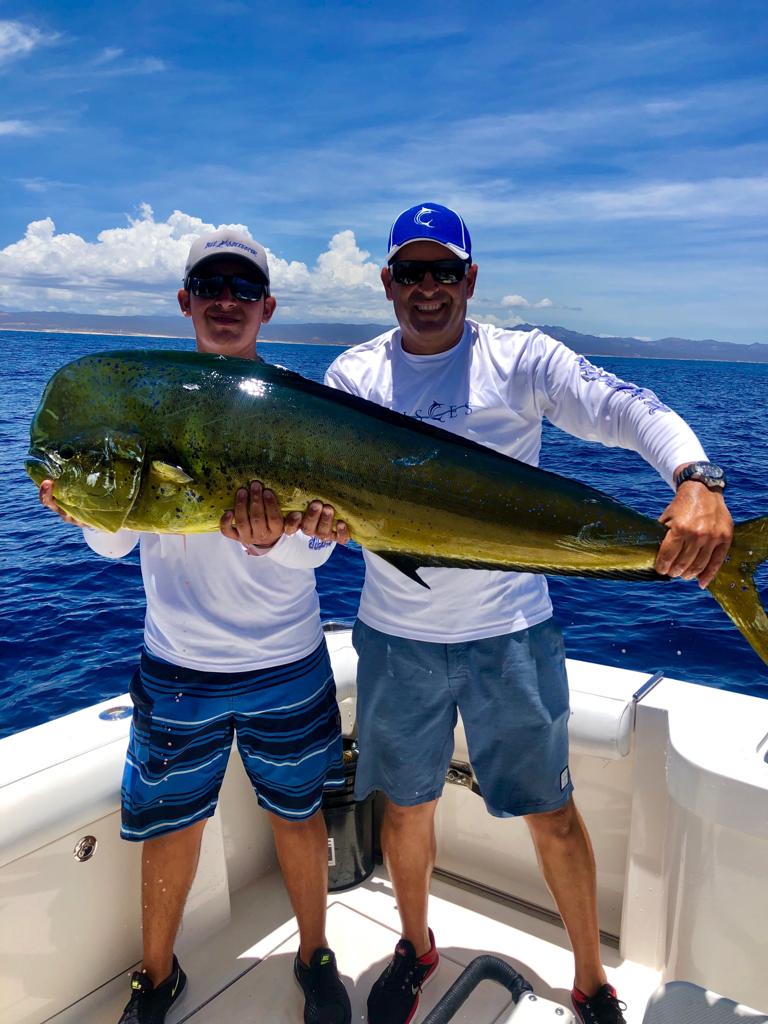 More marlin for anglers Emily, Jennifer and Michael(s) Wise aboard Pisces 35′ Bill Collector 2 with 2 striped marlin released at the 95 Spot. Fish hit on ballyhoo bait and a blue/white lure. They weighed approx 70 lbs each.

Pisces 31′ Ruthless had an equally impressive week, with one of their standout days, July 25th bringing them 1 striped marlin released of about 70 lbs, which hit on dead caballito at La Herradura and two very nice sized sailfish, including an approx 130 pounder. These hit on live and dead caballito at Herradura as well, for anglers Alexandro, Gabriel and Mercedes Giron from Mexico City. All fish were tagged, re-oxygenated and released by anglers themselves.  Pisces 31′ Ruthless also focused on tuna this week, with one of their top days hitting the dock with 15 yellowfin tuna flags. All hitting on feathers and cedar plugs out of the 95 Spot for Brad, Dan and Mike Edwards. These guys headed back out with Pisces 30′ Karina and did equally well, landing 14 yellowfin tuna between 10 and 20 lbs, this time out 30 miles to the 150 Spot. 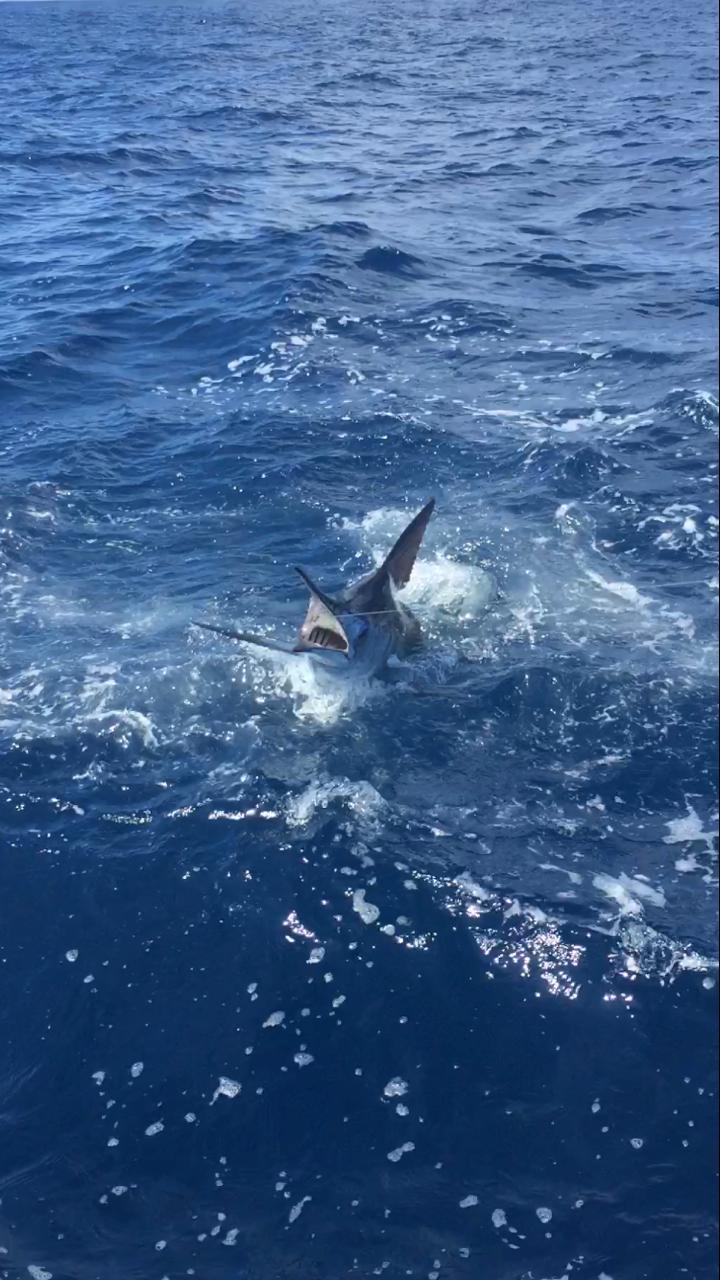 Pisces 31′ Tiburon also did well with tuna, 19 yellowfin on their top day, and fish ranging from 15 to 25 lbs each. Again, on cedar plugs and feathers, but out of the 130 spot.

But the biggest and most impressive tuna this week was one caught by another charter boat, Finn Addict, with good friends of ours, Captain Martin Oloascoaga (brother of Captain Tito Oloascoaga on Pisces 35′ Knot Workin’ – known tuna master fisherman in the fleet – these guys definitely have tuna fishing in their blood!) and Mate David Martinez and Tupacc Trejo. Anglers were Terry Beck and family, and the fish weighed in at an impressive 254 lbs! The crew used their kite about 25 miles South of the Old Lighthouse and found a school of porpoise. It was the first fish to hit their lure, and with that, they needed for nothing more! Terry fought the tuna for about an hour before getting it to the boat. 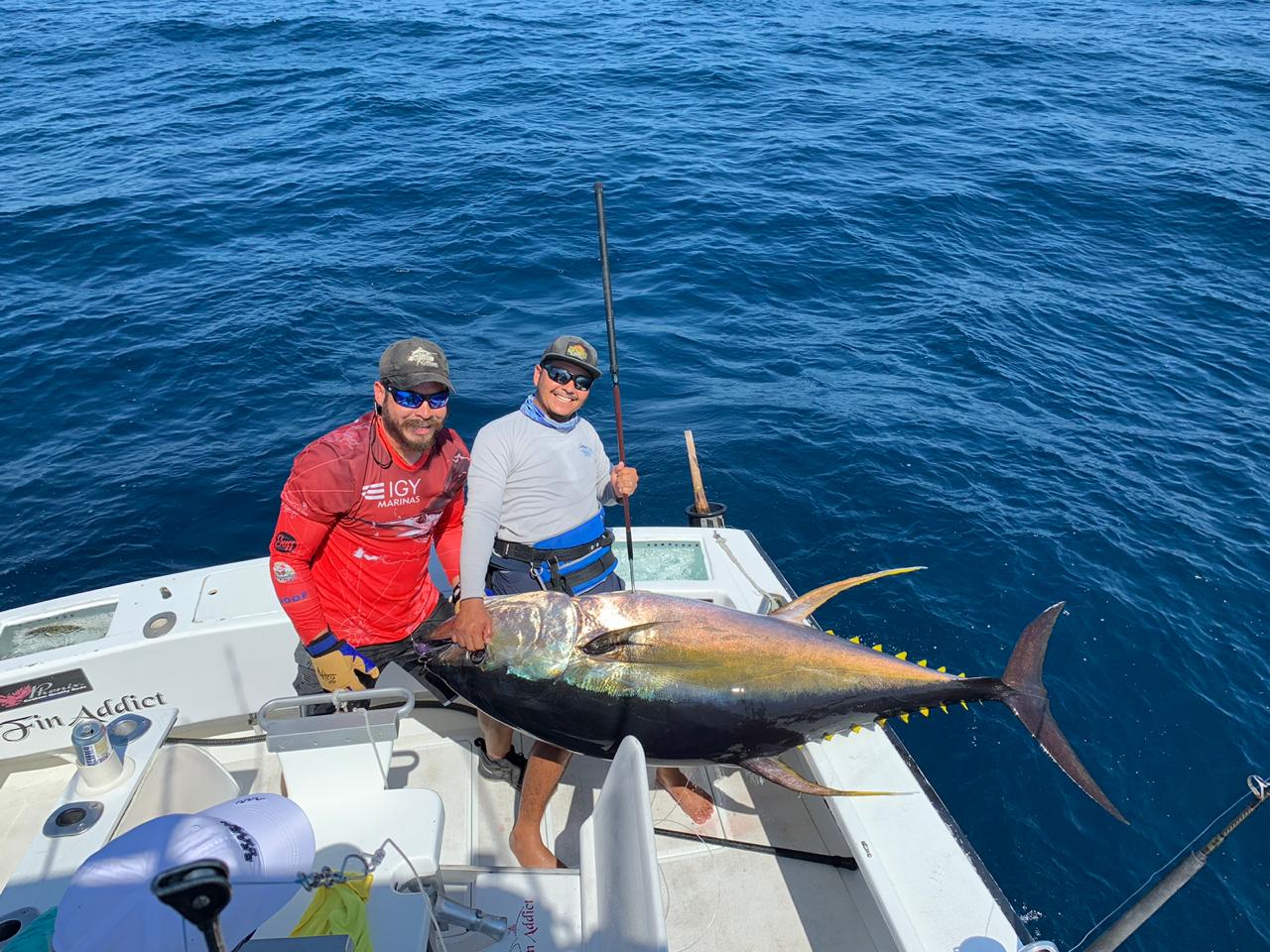 Las but not least, Pisces 35′ Valerie covered a lot of ground this week from dorado fishing with the Hollenbach’s, who landed a very nice 30 pounder out of the 11:50 Spot, to the 80 lbs striped marlin released out 25 miles South with dead caballito, and a 200 lbs Blue Marlin released the same day by James Walsh from Des Plaines, Illinois. 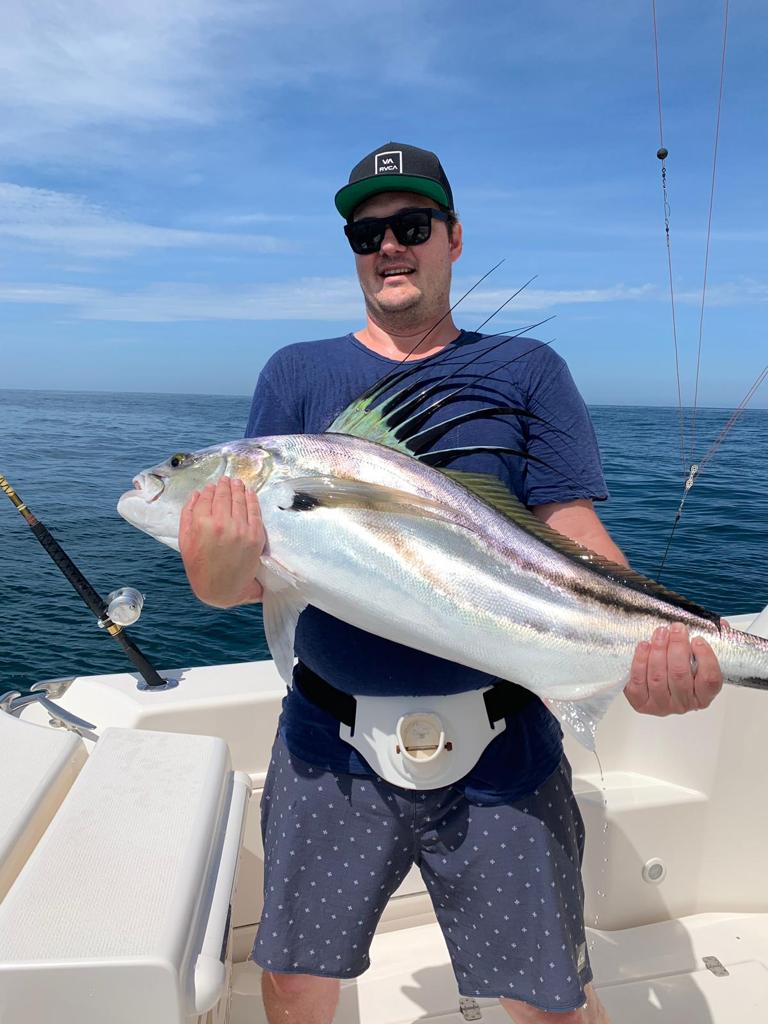 They also headed inshore beginning the week and did well to release an approx 35 lbs roosterfish which hit on live caballito and kept a good number of triggerfish too. 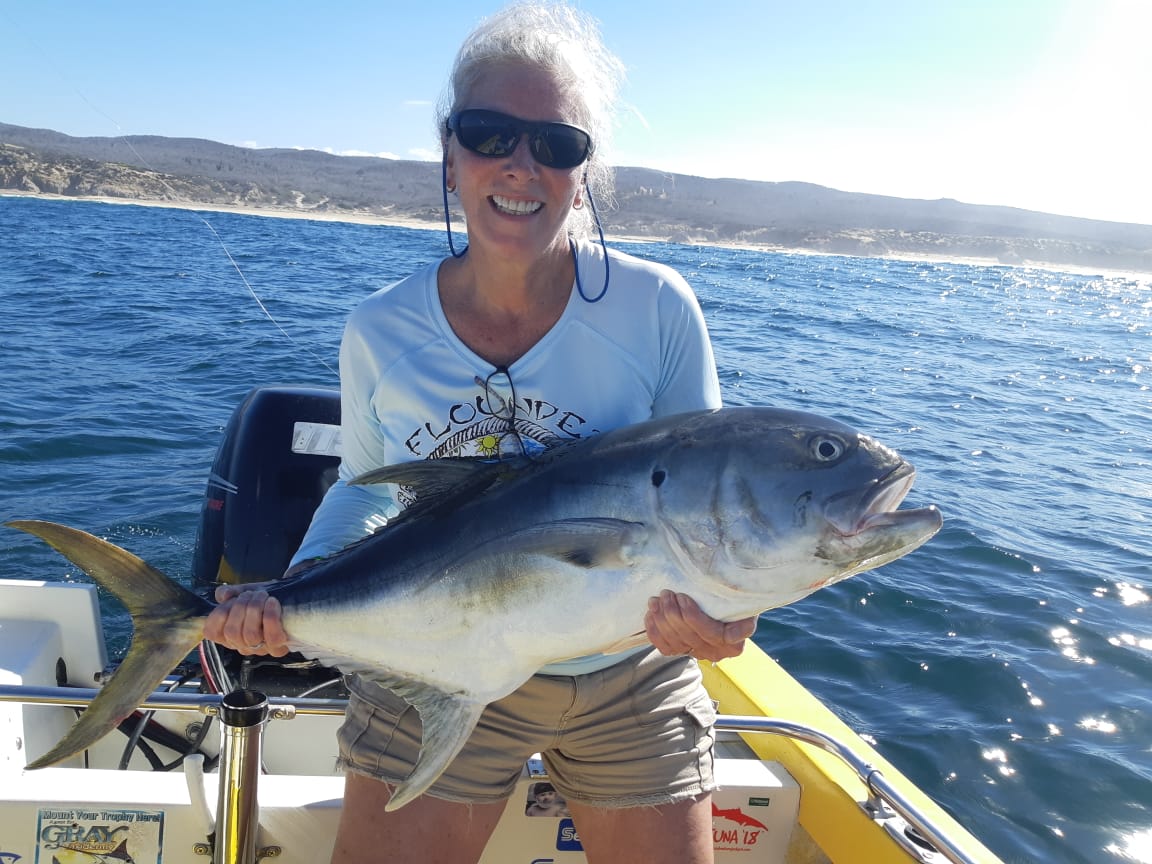 Cindy Williams with 1 of 2 Jack Crevalle caught and released