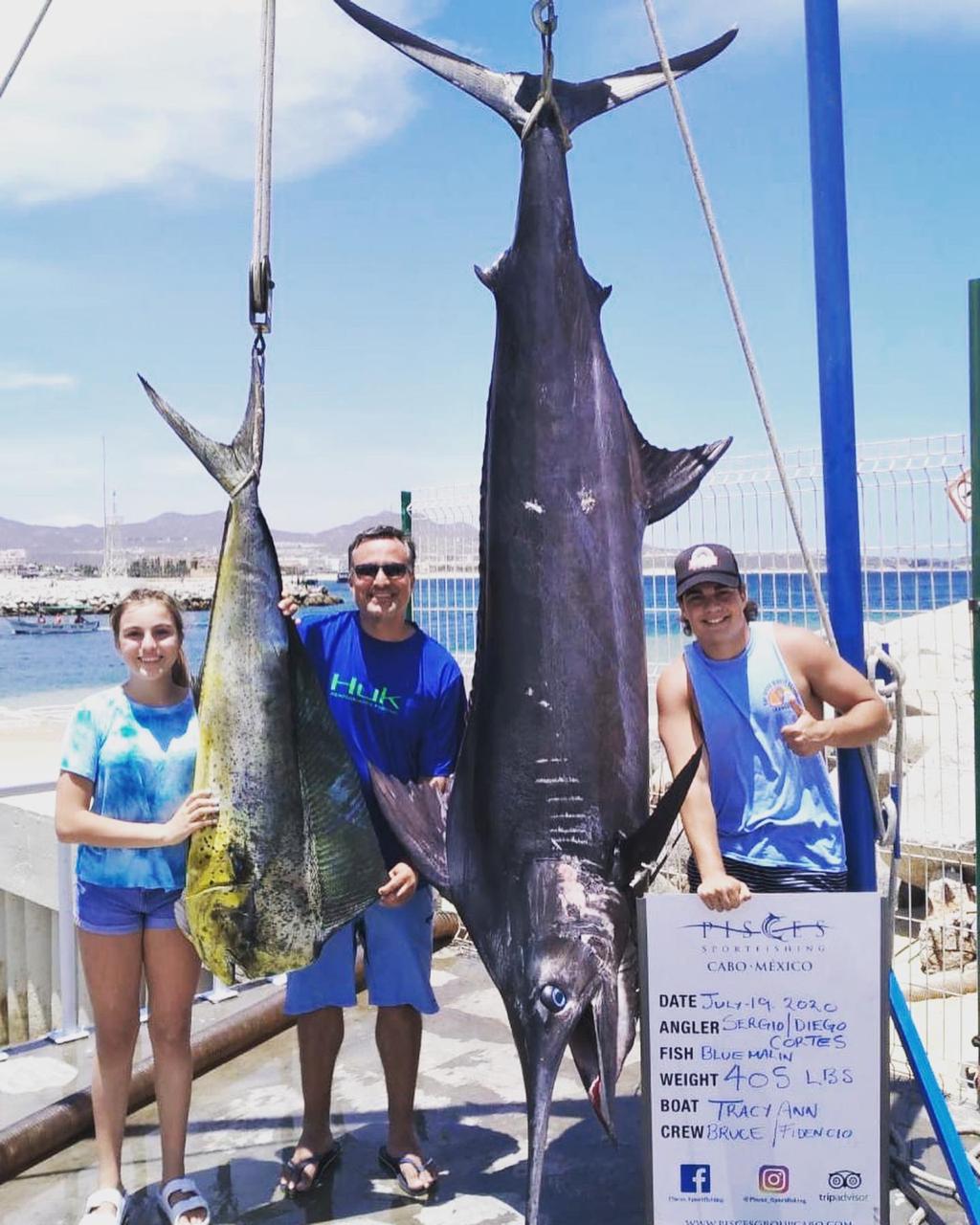 Sergio, Diego and Paula Cortes had an EPIC day on Pisces 31′ Tracy Ann with a Striped Marlin Released, this BIG Blue Marlin and 50 lbs Bull Dorado!

As to be expected, July fishing is still good, but not as consistent, as we are already used to seeing for this season. July fishing is mainly about the quality not the quantity, and that’s one thing that we have seen consistently. Usually we start seeing Blue Marlin showing up around 200 lbs, but this year surprisingly (or not) the Blues coming through have been somewhat larger than in previous years. Our largest for the fleet was caught by our Top Billfish Boat again this week, Pisces 31′ Tracy Ann  , which had 11 Marlin total and a impressive 405 lbs Blue Marlin  for father and son anglers Sergio and Diego Cortes. The anglers decided to keep their fish after a three hour fight, but released a Striped Marlin and also landed an impressive Bull Dorado of about 50 lbs! 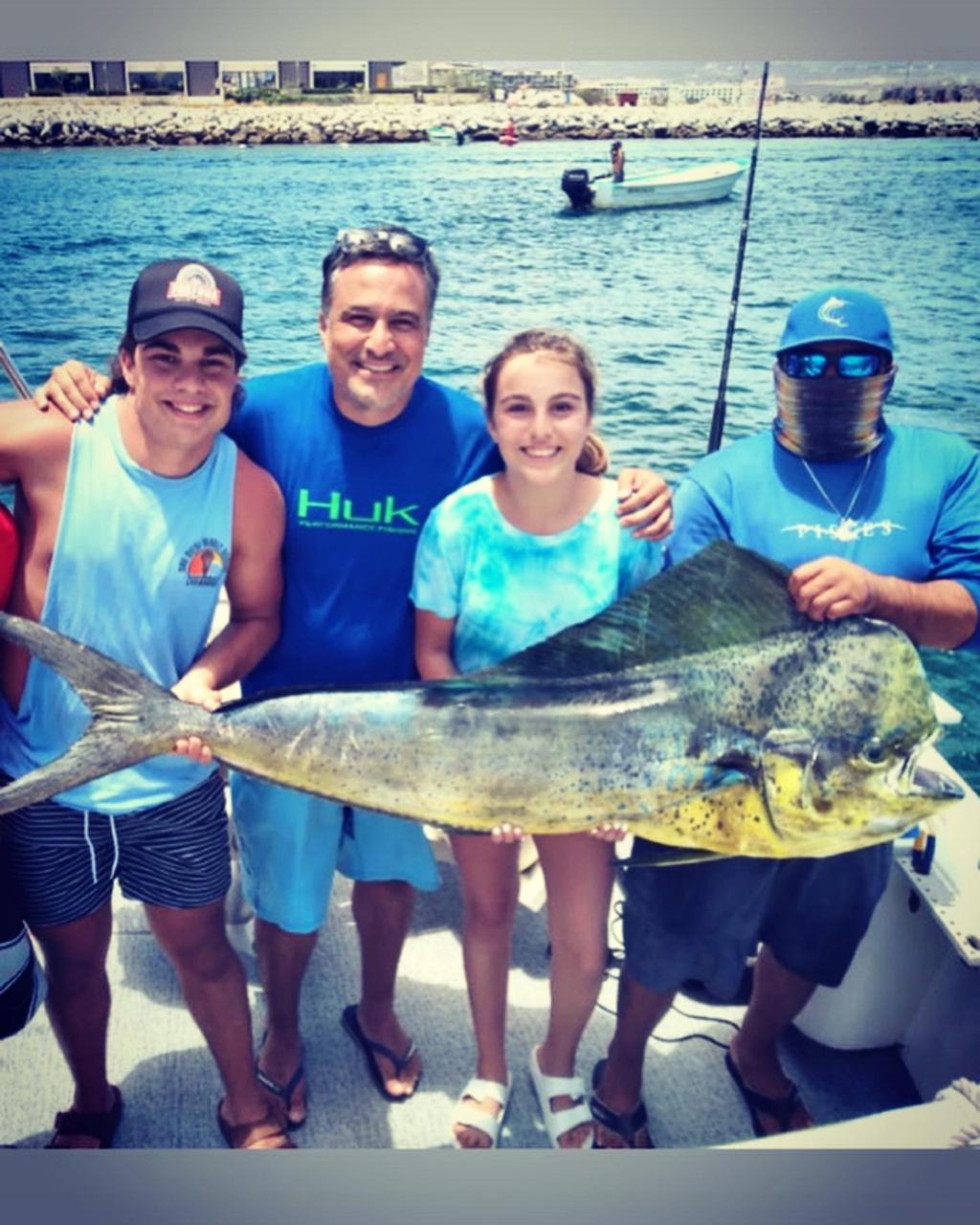 Marlin was our most prevalent catch this week, with 38 releases total for a total of 20 boats. The bite did slow somewhat compared to last week, but we expect it to pick back up after a few days with some changing weather coming our way. A total of 30 tuna caught, averaging between 15 and 45 lbs.  And although we only had 3 Dorado caught total, we made them count, with three bulls of 40, 50 and 55 lbs each! We also saw one of our first wahoo of the season, a 40lbs fish caught on Pisces 42′ Yahoo, which also released a Striped Marlin. Only a few Roosterfish caught to close out our “Other” species category. 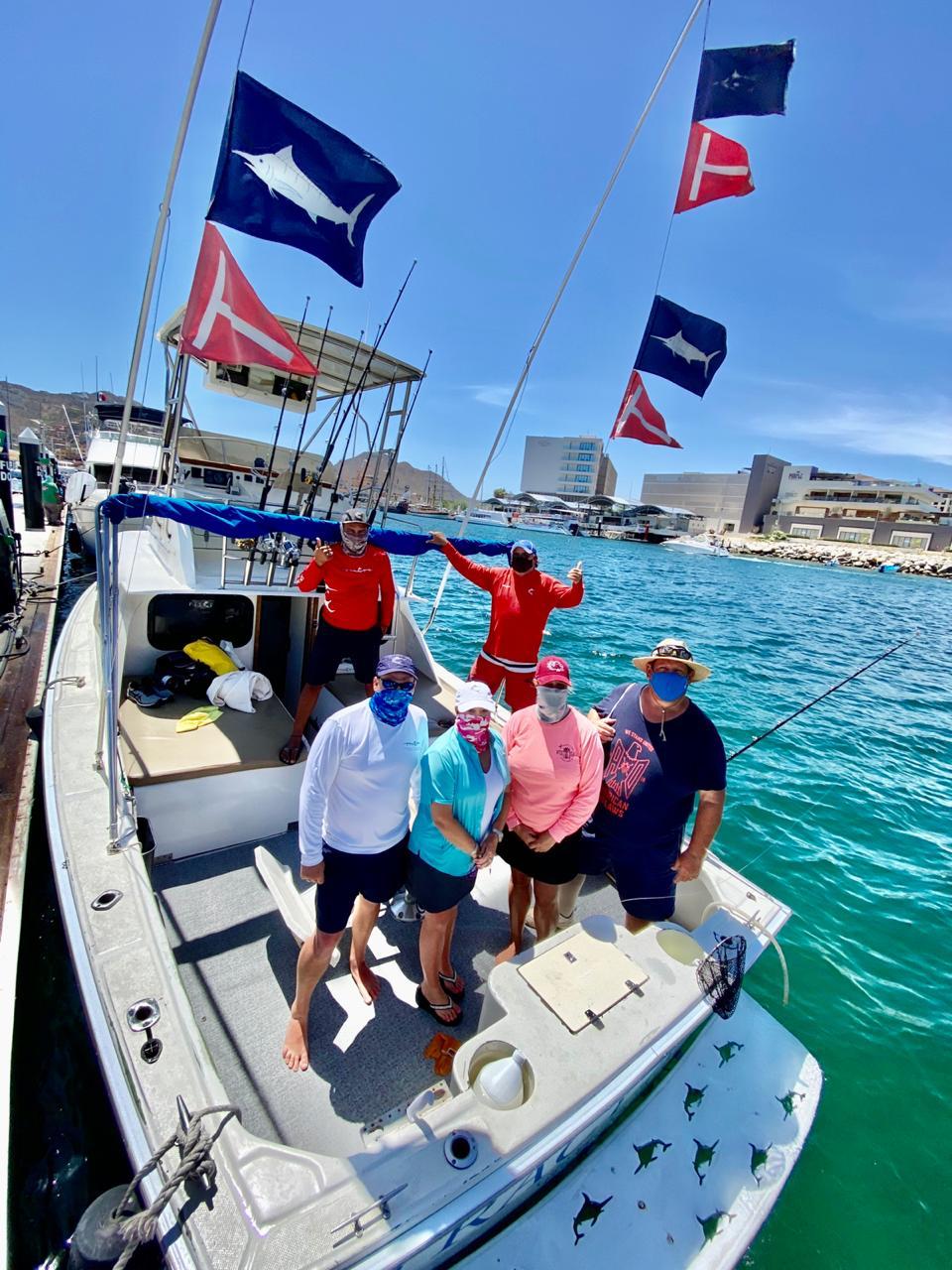 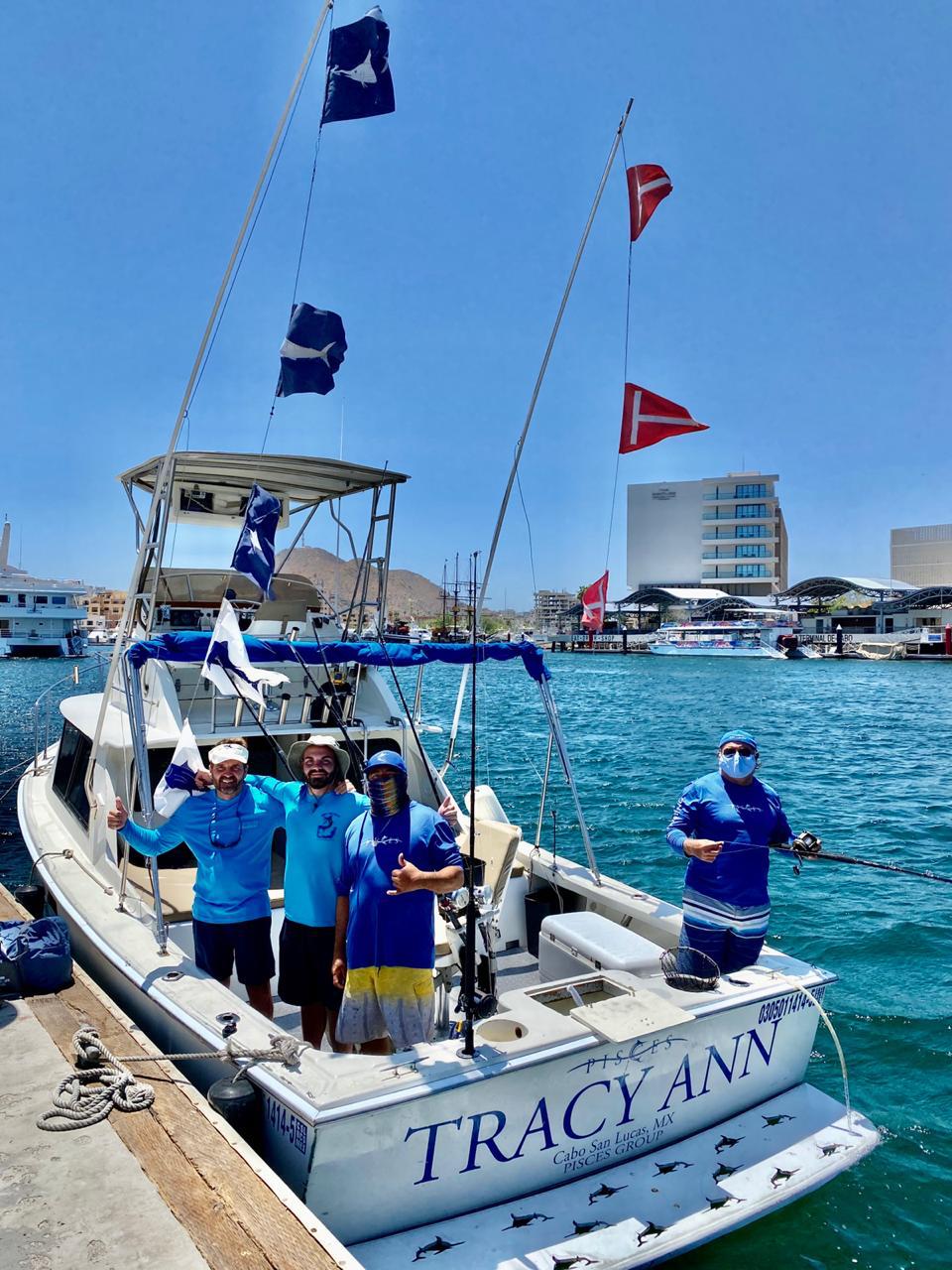 Top Billfish Boat, Pisces 31′ Tracy Ann, not only had this Big Blue, but also went on to have two back to back days of good malrin releases, 3 and 4 released consecutively, plus, had a decent Swordfish on but lost it. Anglers James and Glen Jacobs released 3 Striped Marlin, which took caballito bait. They also kept 2 Yellowfin, plus lost a big one, fishing on cedar plugs and feathers close to La Herradura. Anglers Carey and Richard Kernion and John and Monica Brignac released a marlin each, all around 130 lbs on live bait close to the 95 spot. 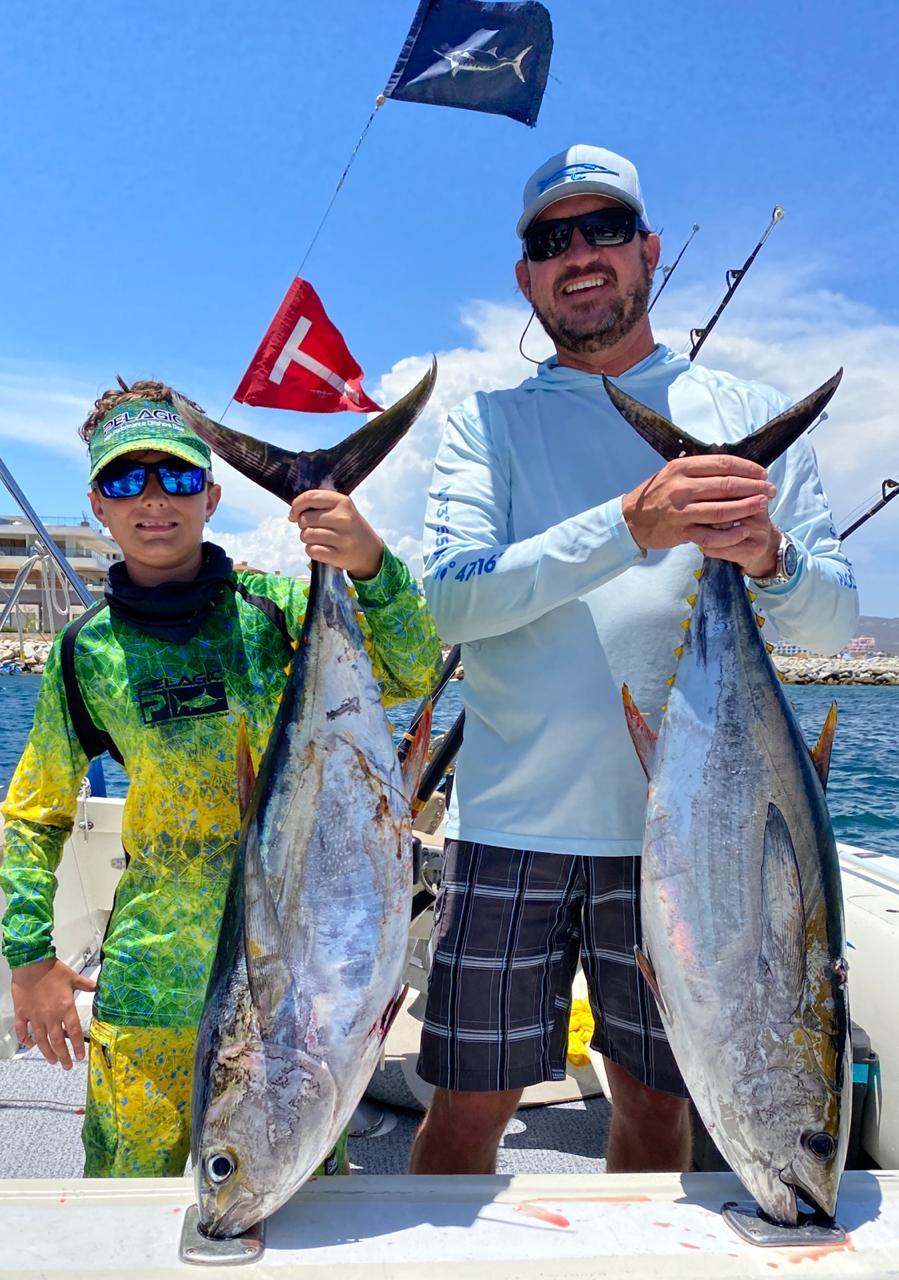 Father and son, Chris and Hamilton Gavlick had 3 YFT and 1 Striped Marlin Released on Pisces 31′ Rebecca 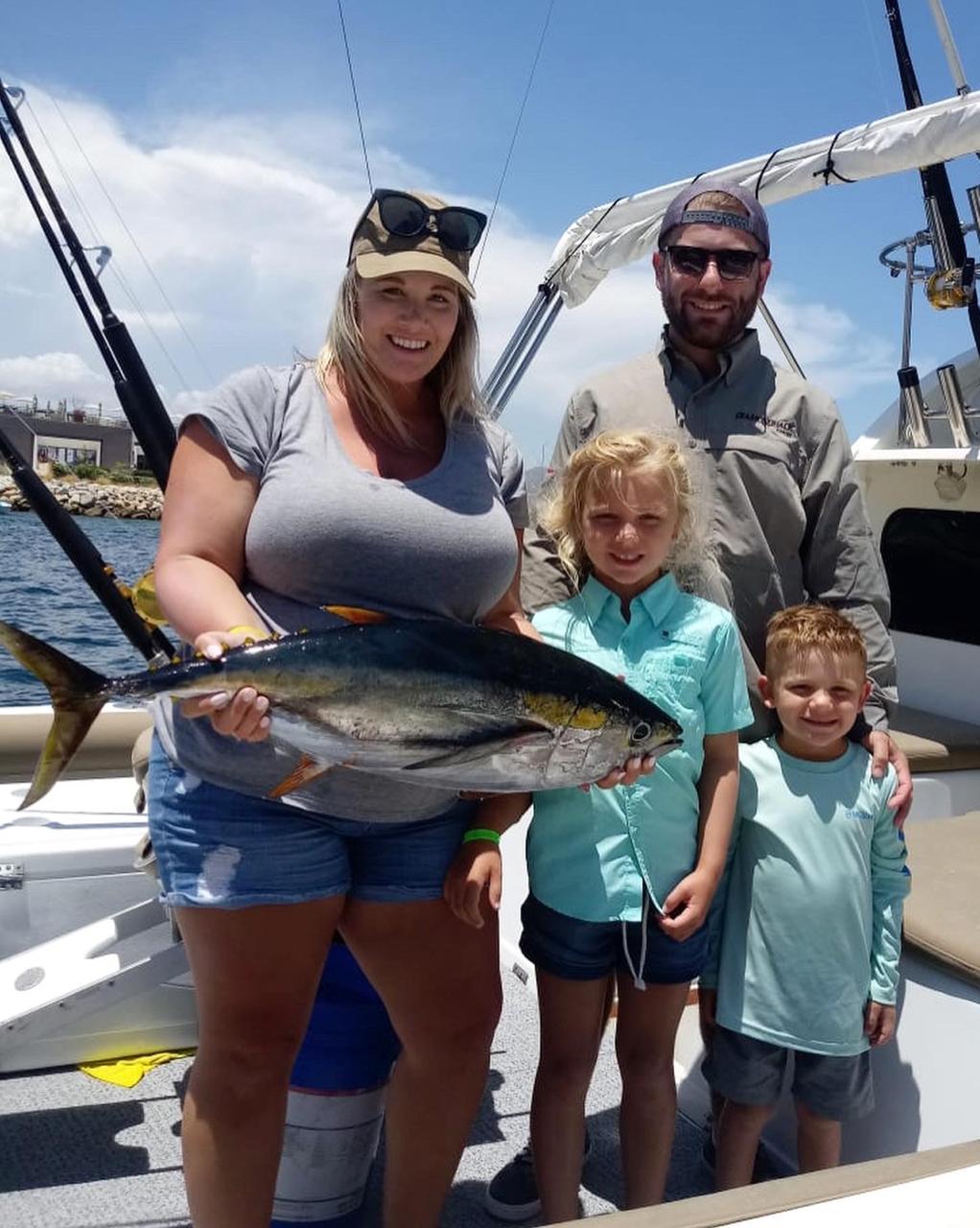 Pisces 30′ Karina had 4 Striped Marlin for anglers Ronald Briley and William Gambrell who fought them close to La Herradura hitting on caballito bait. One small yellowfin tuna kept for them as well. Pisces 37′ BBII also had 3 Striped Marlin released this week. 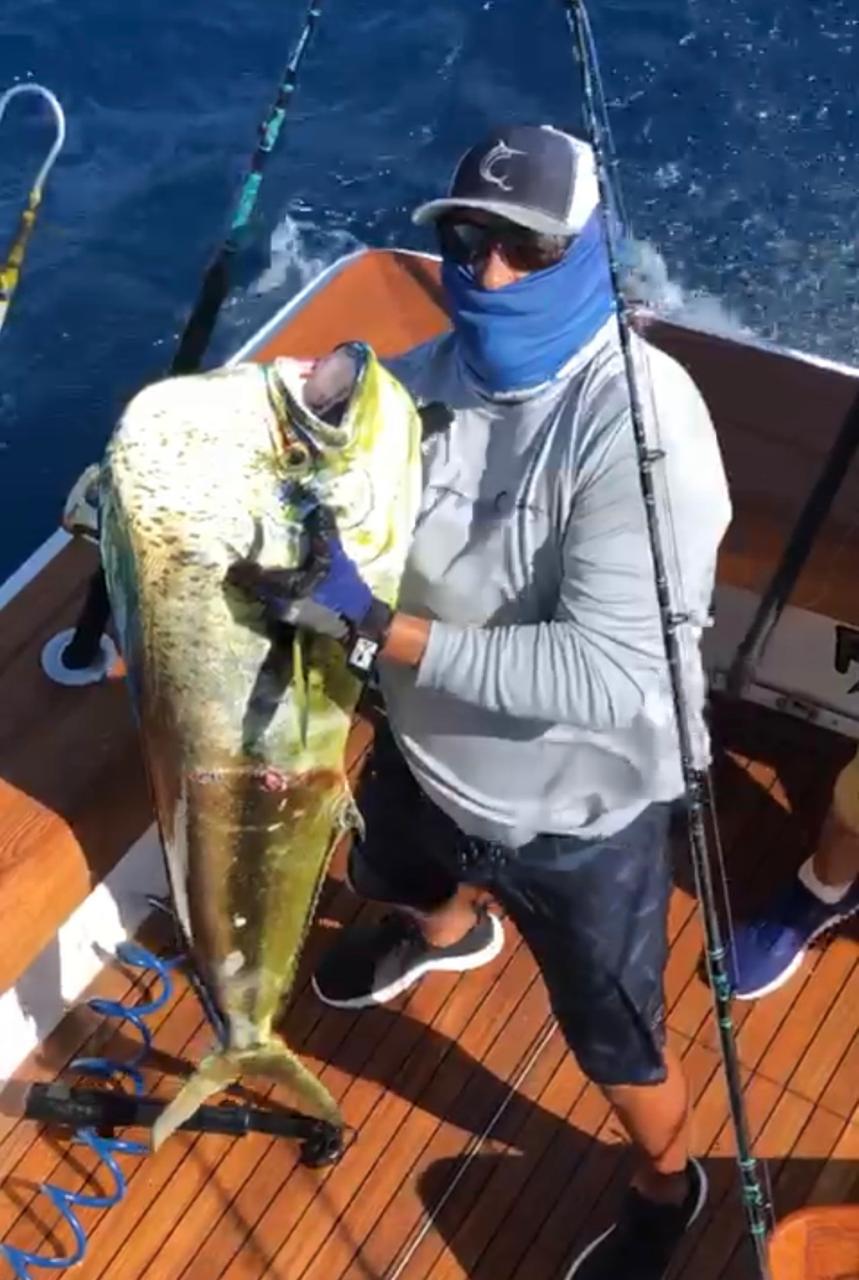 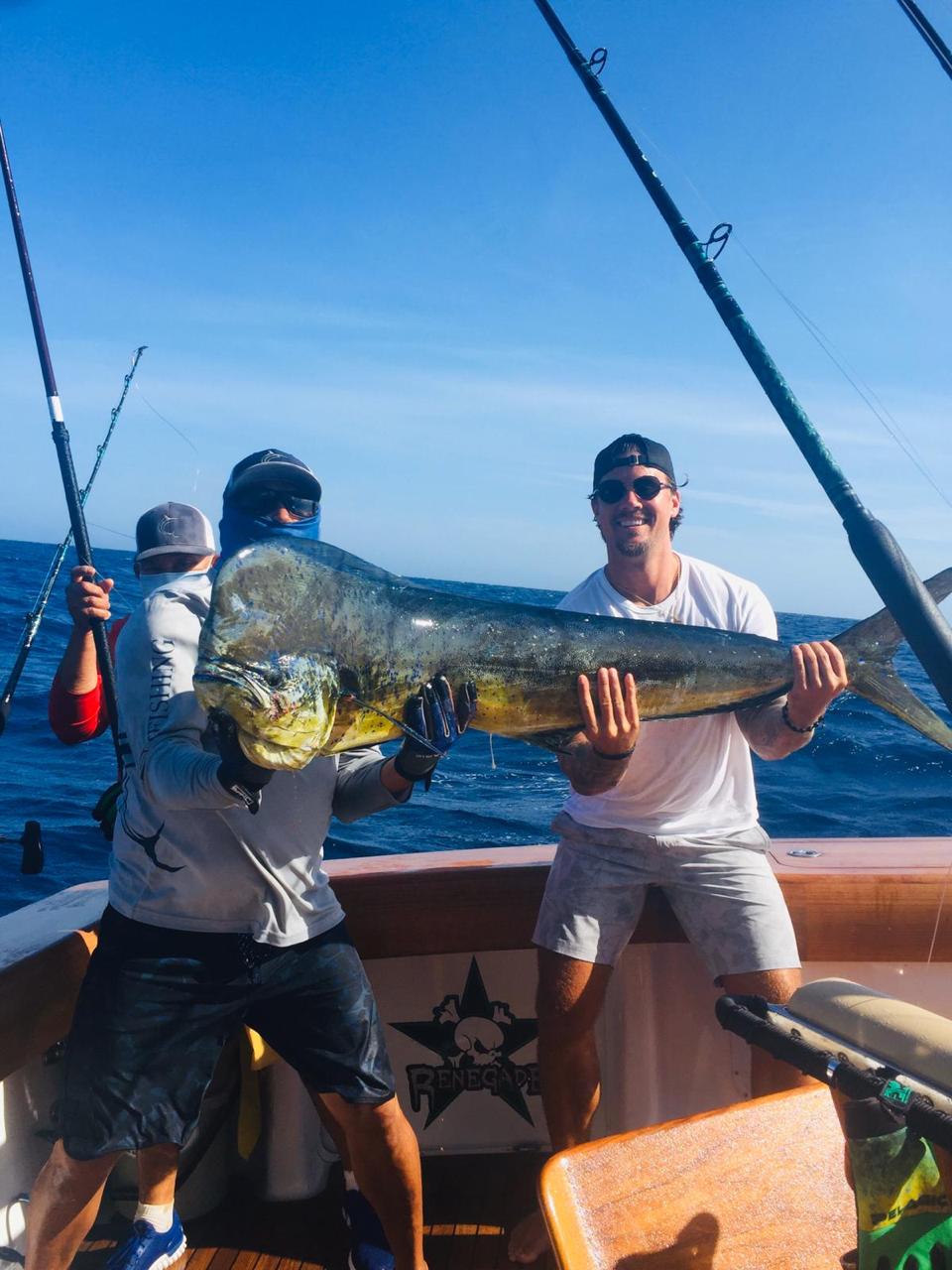 The biggest Bull Dorado for the week was for angler Aaron Kenna, who caught an approx 55 pounder that hit on a blue/white lure, aboard Pisces 61′ Pour Decisions just outside the 11:50 Spot. Anglers aboard also caught 7 Yellowfin of about 15 to 35 lbs, that hit on cedar plugs in the same area. 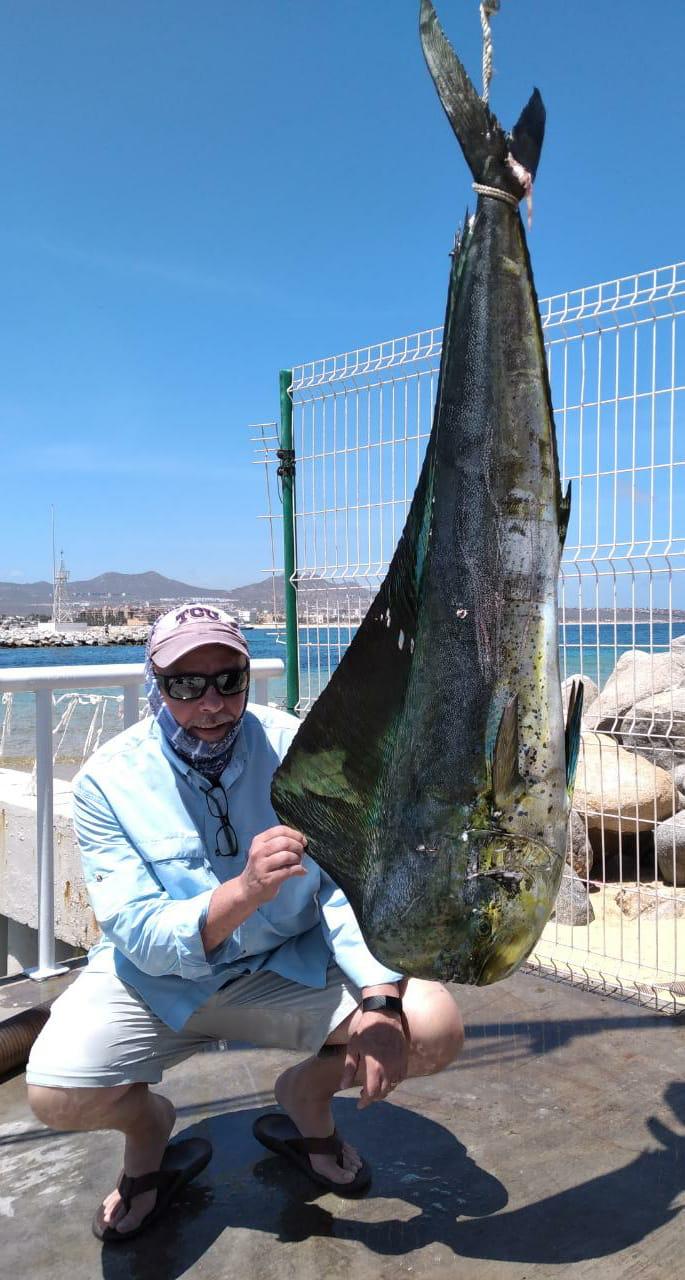 Pisces 35′ Valerie  wasn’t far behind, with a 40 lbs Bull Dorado this Sunday, for the Piccini family. Plus they landed 2 Yellowfin tuna and released 2 Striped Marlin, all close to the 95 Spot. 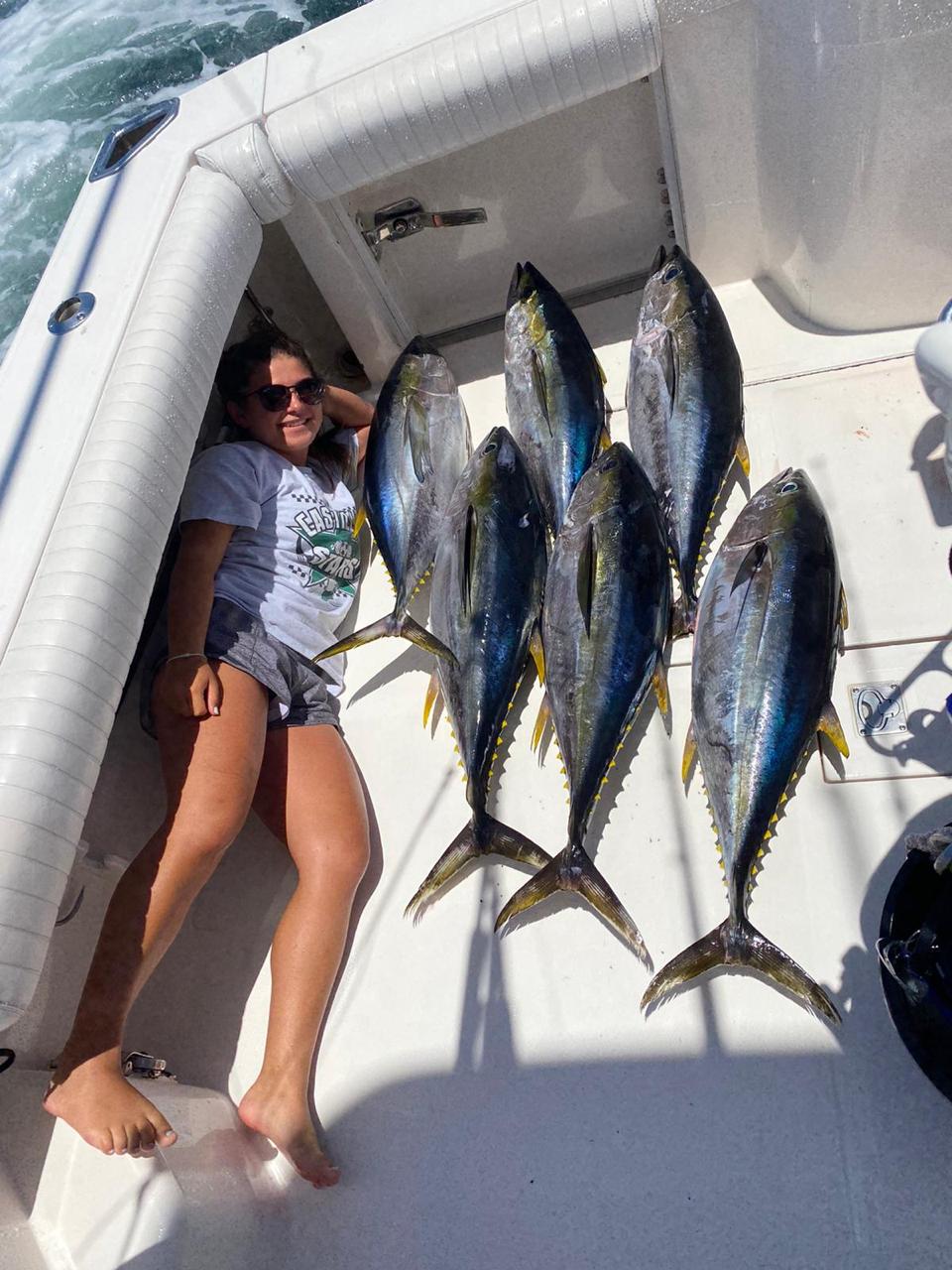 Pisces 32′ Bill Collector brought home the “bacon”, with 6 Yellowfin between 15 and 40 lbs for the Chiavetta family on board, who headed about 35 miles south to find them.

Pangas inshore released a couple of Roosterfish around 10 lbs.