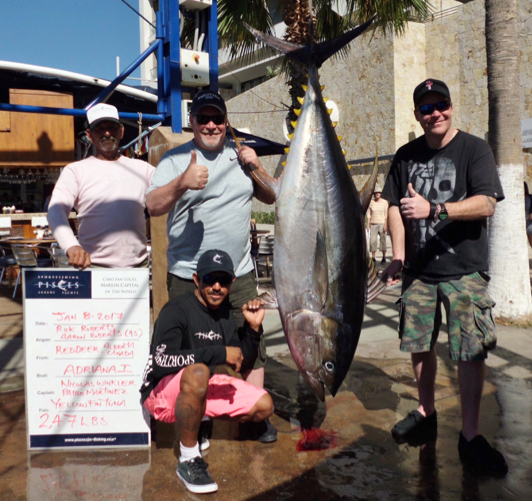 Aaron Roberts (second from left) with his catch of a lifetime, landed on his 45th birthday. This 247lbs yellowfin tuna was landed aboard the Pisces Adriana. Photo by Oscar Ba?agas.

We saw an excellent catch success rate this week, with most of the boats that went out catching some fish. Overall it was smaller game this week, as our other category hits 35% of total catches. Pisces boats saw a varied basket of good eating smaller game fish; many boats are catching sierra mackerel, grouper, sea bass, red snapper, etc. The most landed species this week is yellowfin tuna, with 63% of Pisces boats landing them, most of the tuna landed this week were on the smaller side, although that wasn’t the whole picture, as we did have some impressive large tuna caught on two boats. The weather this week was pretty much perfect, with clear skies and calm seas, we had air and sea temperatures in the 70’s. 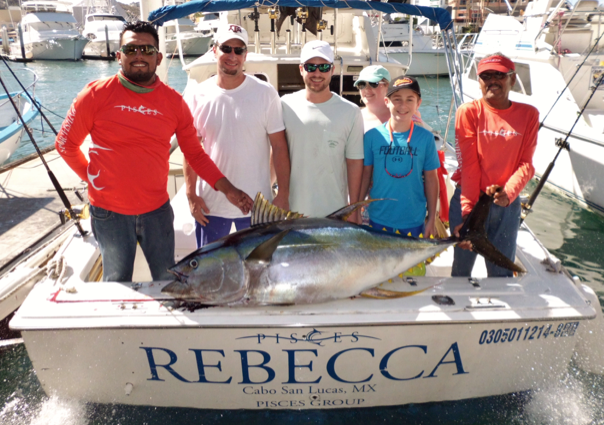 Pisces Rebecca with anglers from Aledo, Texas and their 182lbs yellowfin tuna caught on January 8th. Photo by Oscar Ba?agas.

The largest fish boated this week was on January 8th on the Pisces Adriana, captain Nicolas Winkler was able to put this group of anglers from Alberta, Canada on a 243lbs yellowfin tuna, as well as a nice little grouper. Both fish were landed on mackerel live bait at the Golden Gate spot, and we’re sure this was a fishing trip to remember for one of the anglers Aaron Roberts, as it was his 45th birthday as well. We’re sure this made for the fishing trip and story of a lifetime landing the largest fish of the week. On this same day we had the second largest fish of the week, a 182lbs yellowfin tuna that was landed on the Pisces Rebecca, just off of the San Jaime Bank, as well as landing a 15lbs fish for a group of anglers from Aledo, Texas. The Pisces Tiburon had a nice day out on the 7th, captain Rosendo Gomez took this group of anglers on an offshore and inshore fishing adventure. They caught and released a 140lbs striped marlin, landed seven yellowfin tuna of between 10-20lbs, 5 sierra mackerel in the 4-7lbs range, as well as catching and releasing three roosterfish, all near San Jaime.

Anglers big and small with their sierra (spanish mackerel) caught aboard the Pisces La Brisa. Photo by Oscar Ba?agas.