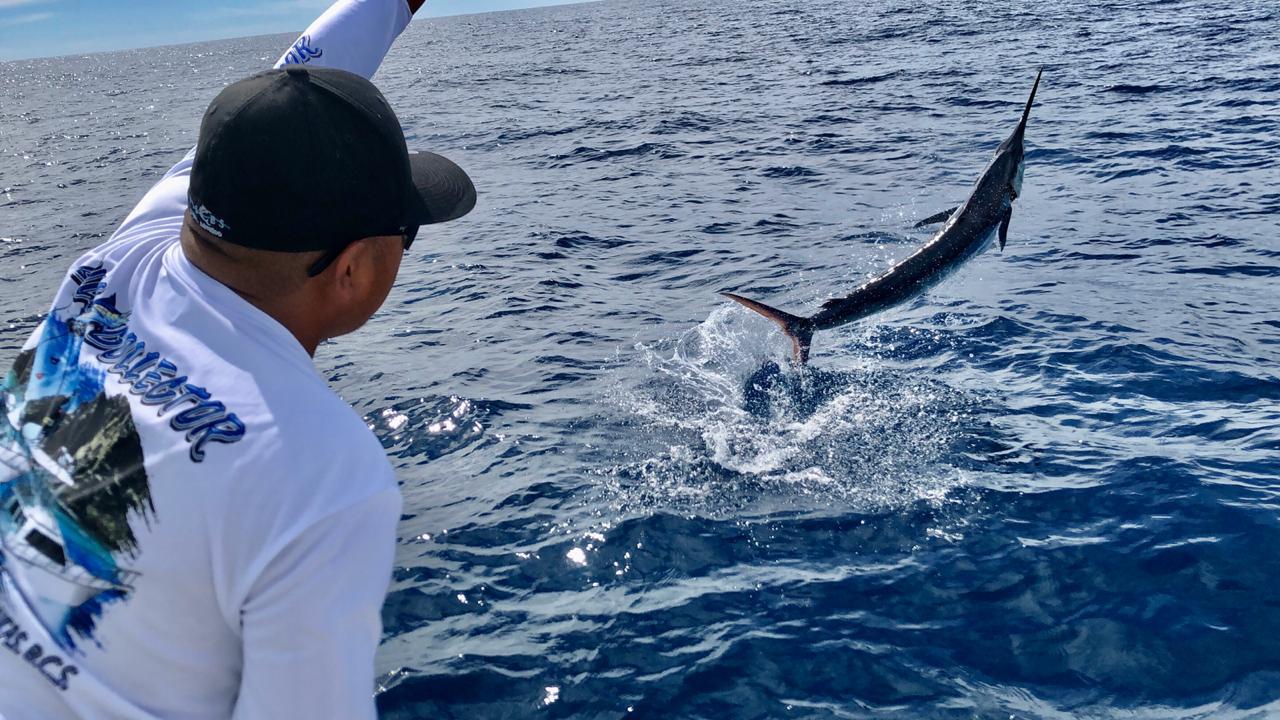 Great fishing again this week in Cabo, which included steady Billfish catches, of up to 6 Marlin released per boat, and still some nice Cow-sized Yellowfin Tuna showing up late in the season. Top Marlin boat, Pisces 35′ Bill Collector 2, went  6 for 8 on Striped Marlin plus an approximate 12 lbs Dorado kept. 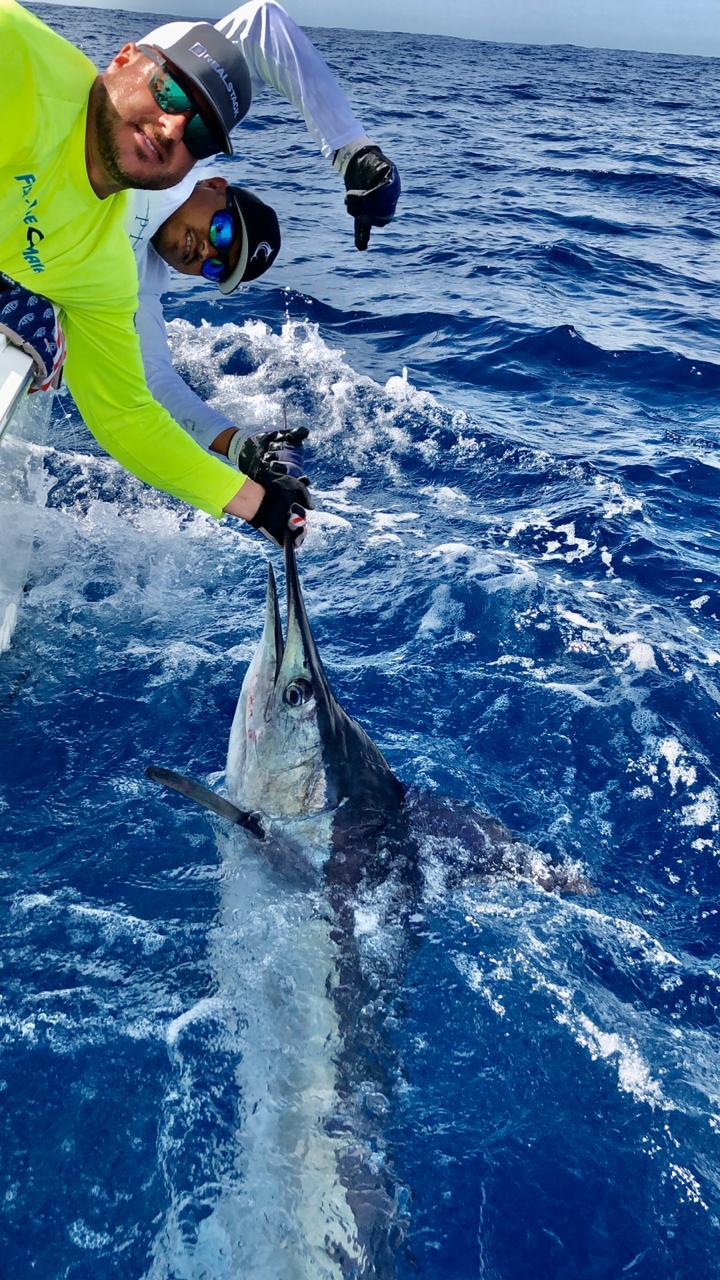 Total billfish releases for the fleet numbered 72 fish; while Dorado numbered 45 total. Top Dorado boat was Pisces 31′ Rebecca, which had an epic day for anglers from Saginaw, Michigan, landing 10 Dorado in one day, ranging from 10 up to 30 lbs each. 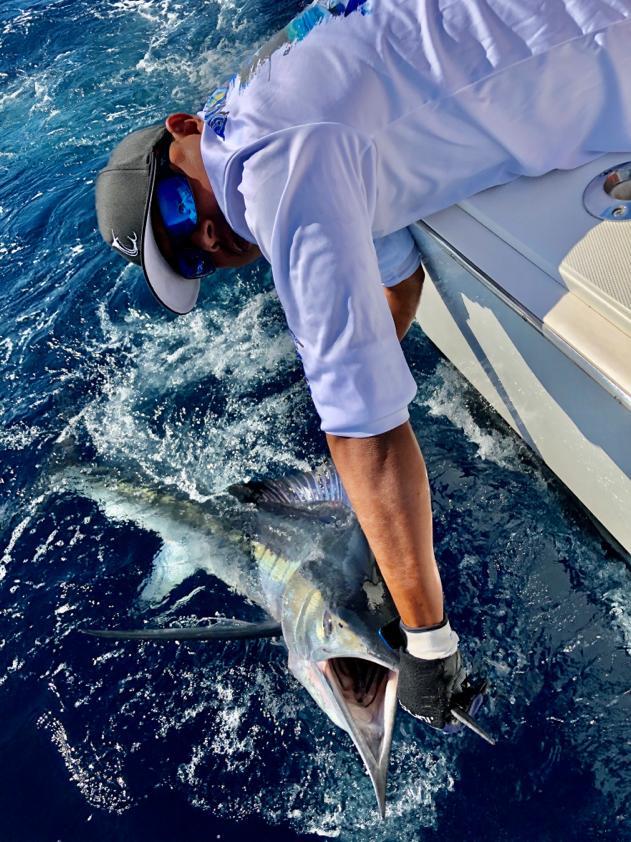 They also released 4 Striped Marlin! Small game catches have continued to produce as well, although the Sierra Mackerel did slow compared to last week, which was just a Sierra free-for-all. We have started to see more Grouper, Red snapper, Jack crevalle and Roosterfish showing up. 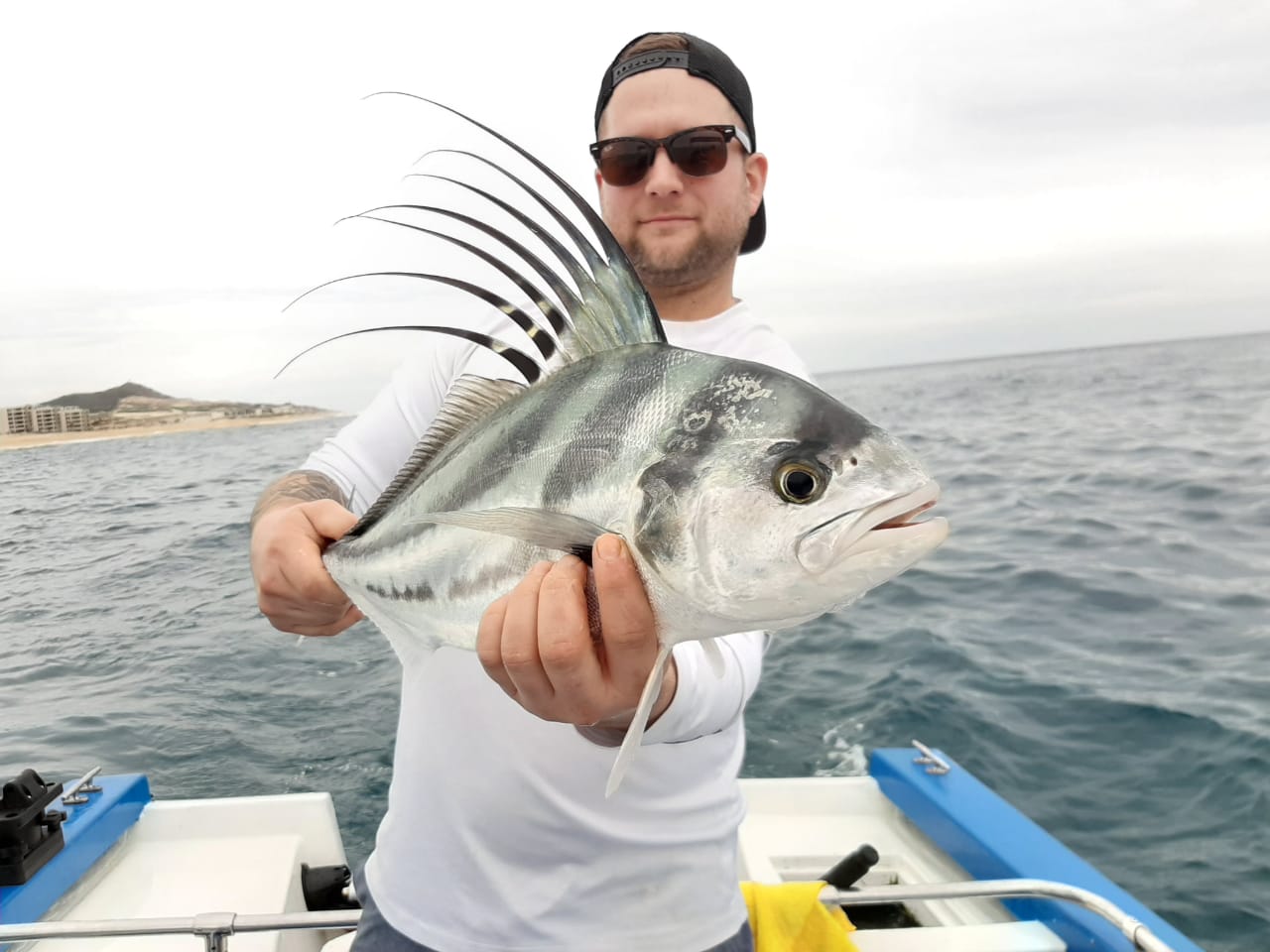 Pisces 24′ Panga Tres Marlins for example, had 1 approx. 10 lbs Roosterfish released, 1 Jack Crevalle released and 1 Grouper on a half day with Emerson and Tim Scharnberg from Canada. 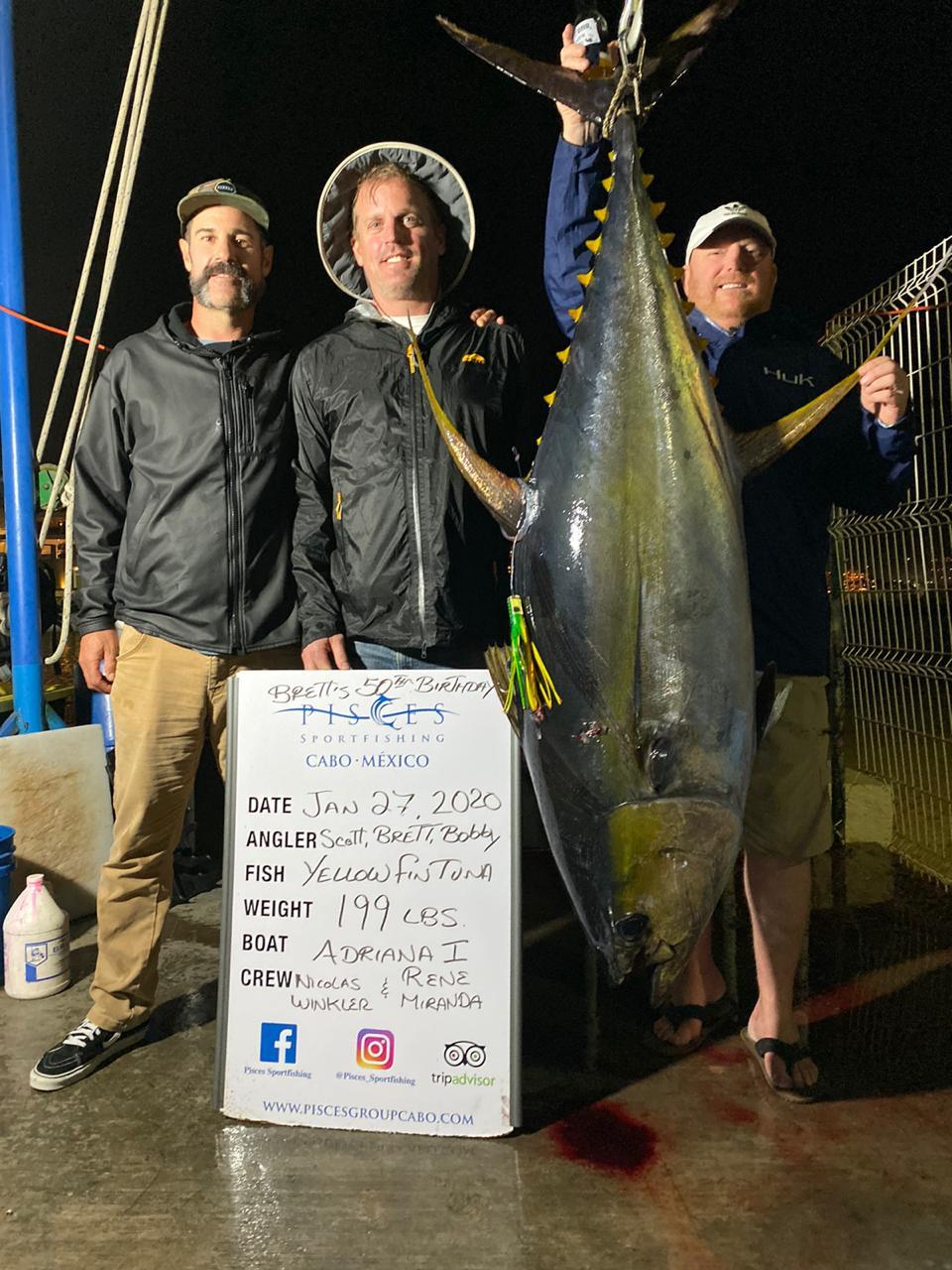 The biggest surprise this week though was the 200 lbs Yellowfin Tuna caught on Pisces 28′ Adriana  by anglers Bob Mitchell, Scott Croasdale and Bret Koehler from CA and Colorado.The anglers, who were celebrating Brett’s 50th birthday, began their fight with the monster tuna at approximately 11 AM, and did not hit the dock until 8 pm. They fought the fish on a 30 Penn International with 60-pound test! Teh Tuna hit a yellow/green lure in a school of porpoise at Golden Gate. The guys also caught a small dorado. We had 256 Tuna caught total for the fleet, respecticing catch limits. Top Tuna boat, Pisces 31′ Tracy Ann landed  22 in one day, ranging from 10 to 25 lbs each; plus a marlin released too! 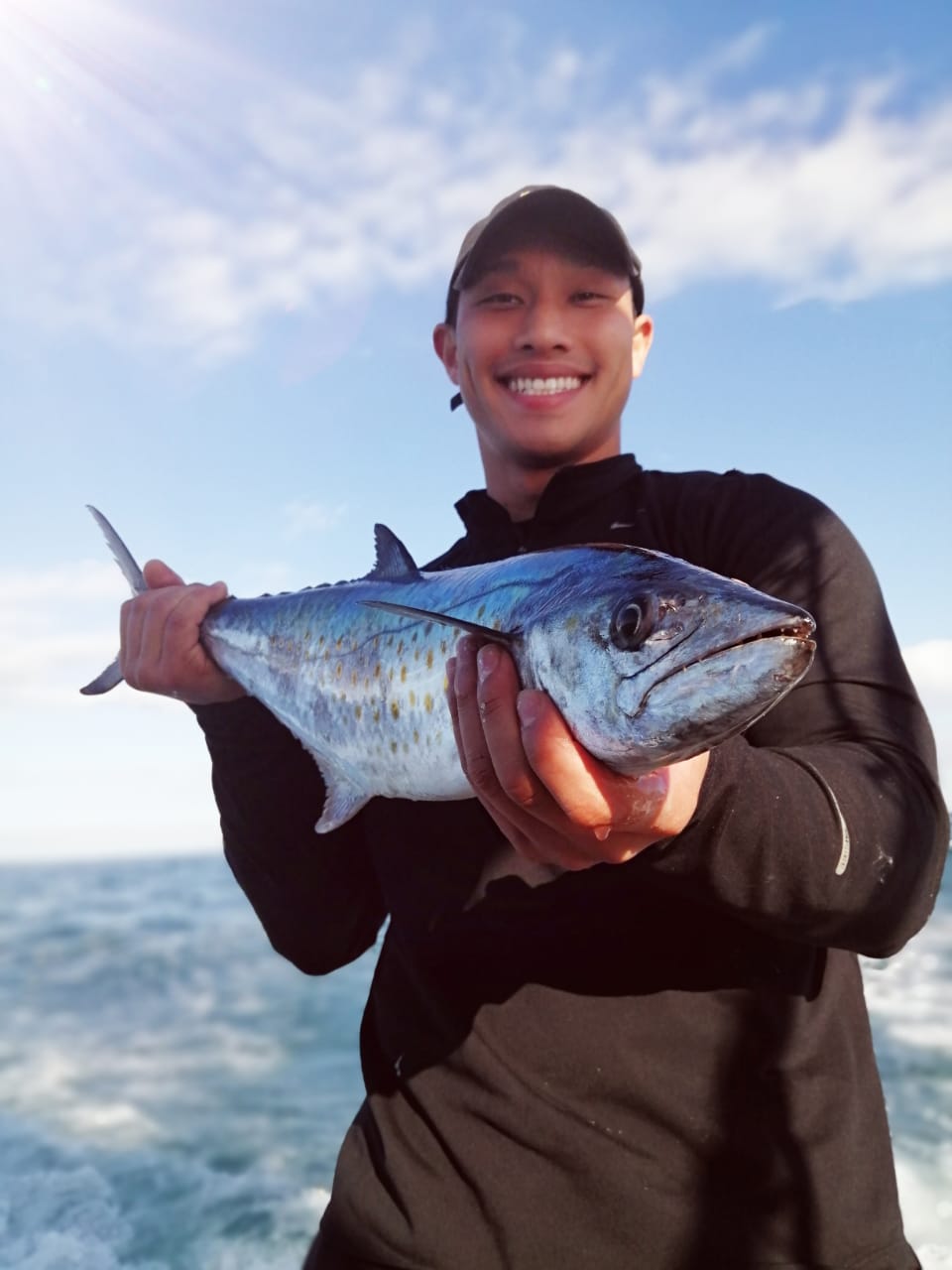