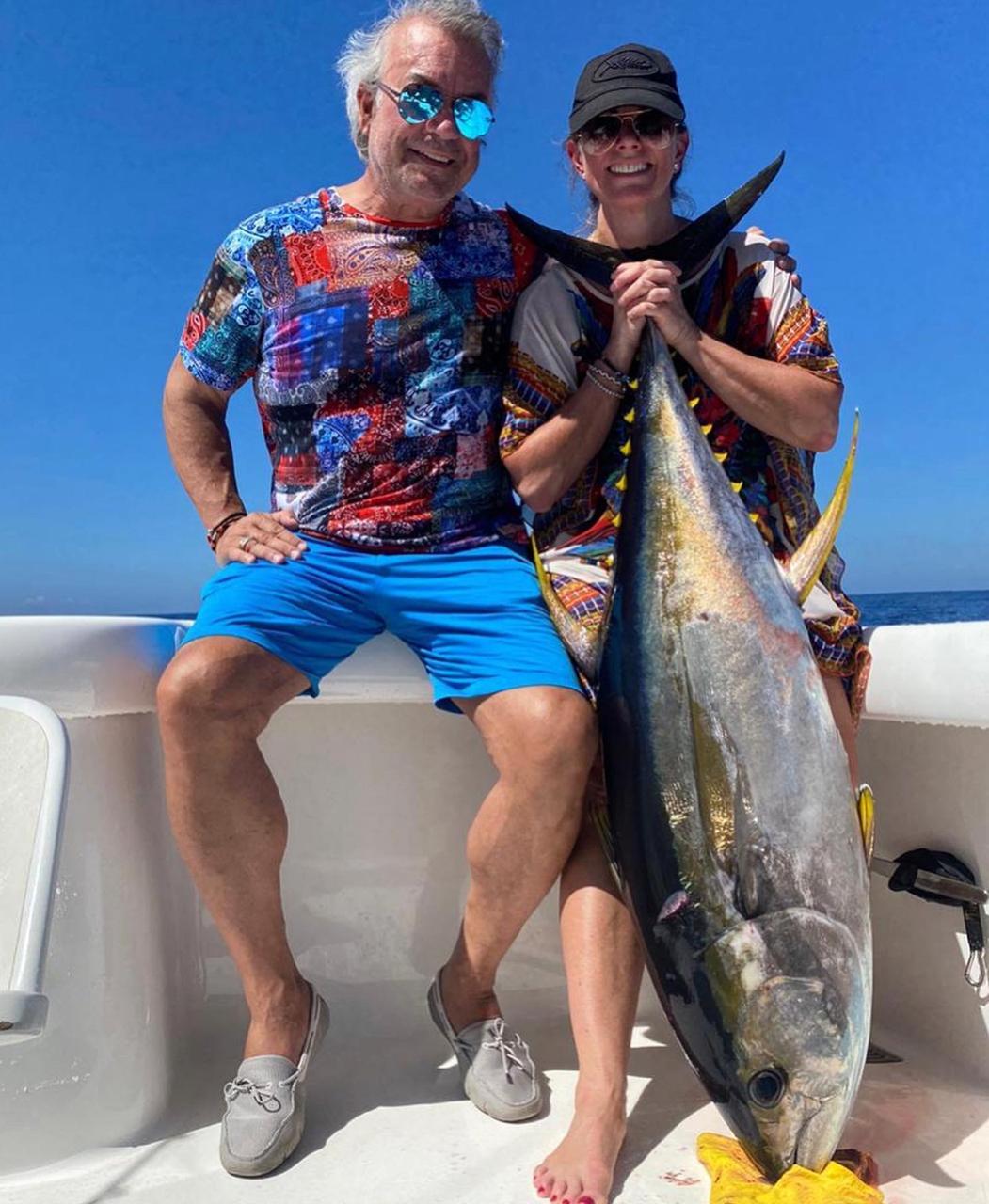 Anglers on Pisces 37′ BBII had their fill of Tuna and Also released a Black Marlin of nearly 300 lbs!

Tuna fishing has picked up from San Jose to Cabo since last week, with Pisces boats landing fish in the 80 lbs range regularly now. Sixty percent of Pisces boats targeted Tuna this week with success, and we had a total of 205 Yellowfin caught! Wahoo starting to show up also, anywhere from the Cabo Coast at Cabo Bello through to the Iman and Vinoramas on the San Jose side. And although fishing has been somewhat “inconsistent and moving fast”, Yesterday only, we had one Black Marlin of about 300 lbs Released on Pisces 37′ Viking BBII and two 250 lbs Blues, 4 Wahoo.  A Few Striped Marlin for the week too and only 6 Dorado total. 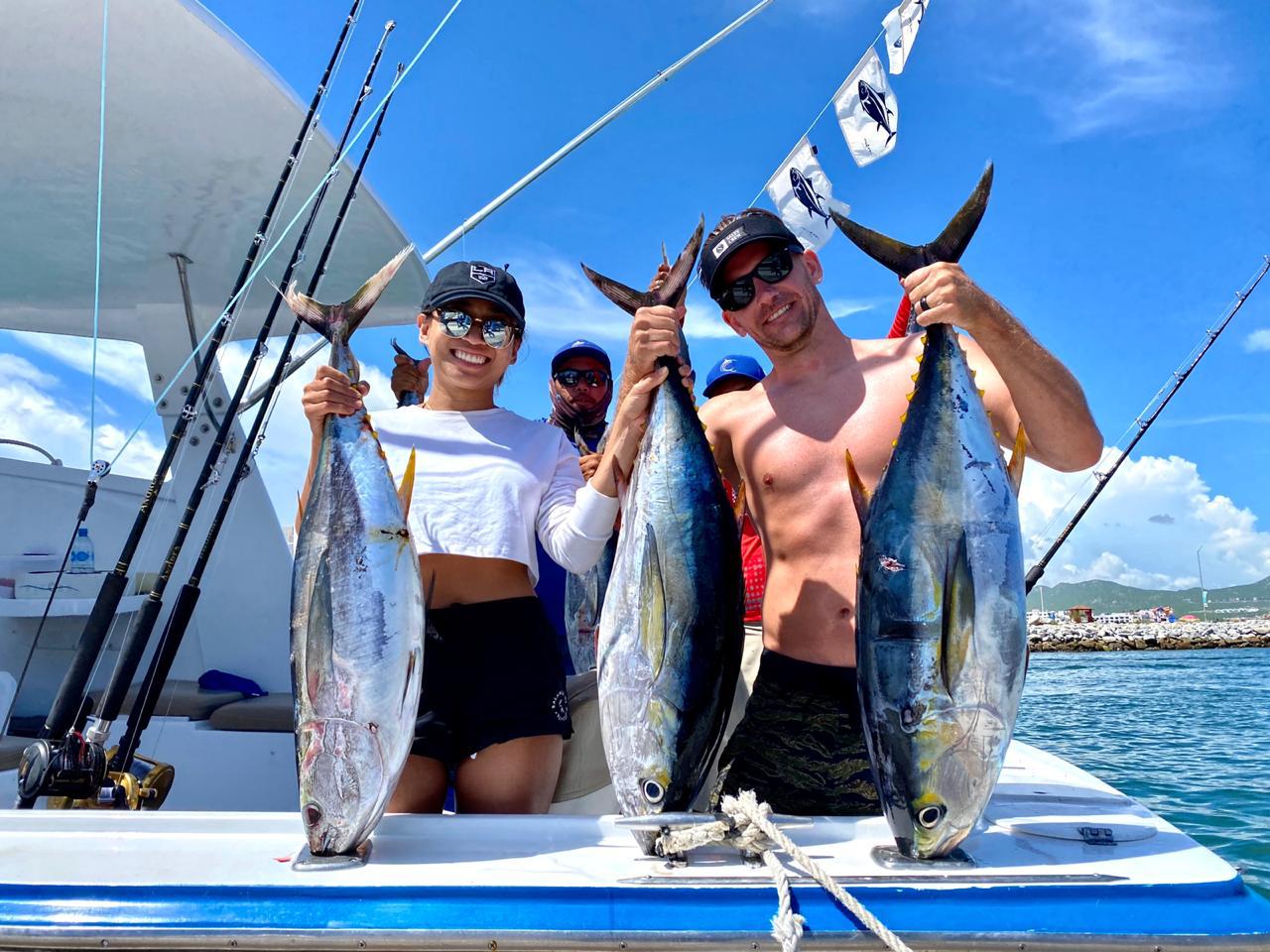 Now let’s dig into some of the details. Starting off the week, last Monday, Pisces 30′ Karina had 1 Blue Marlin released of about 300 lbs after an hour fight, plus 10 Yellowfin tuna. Angler was Martin Cremer from Chicago.

Pisces 42′ Whiskey also had a nice Blue Marlin released, an approximate 320 pounder that hit on a green and yellow lure about 26 miles South. They also kept 2 Yellowfin of about 20 lbs each. 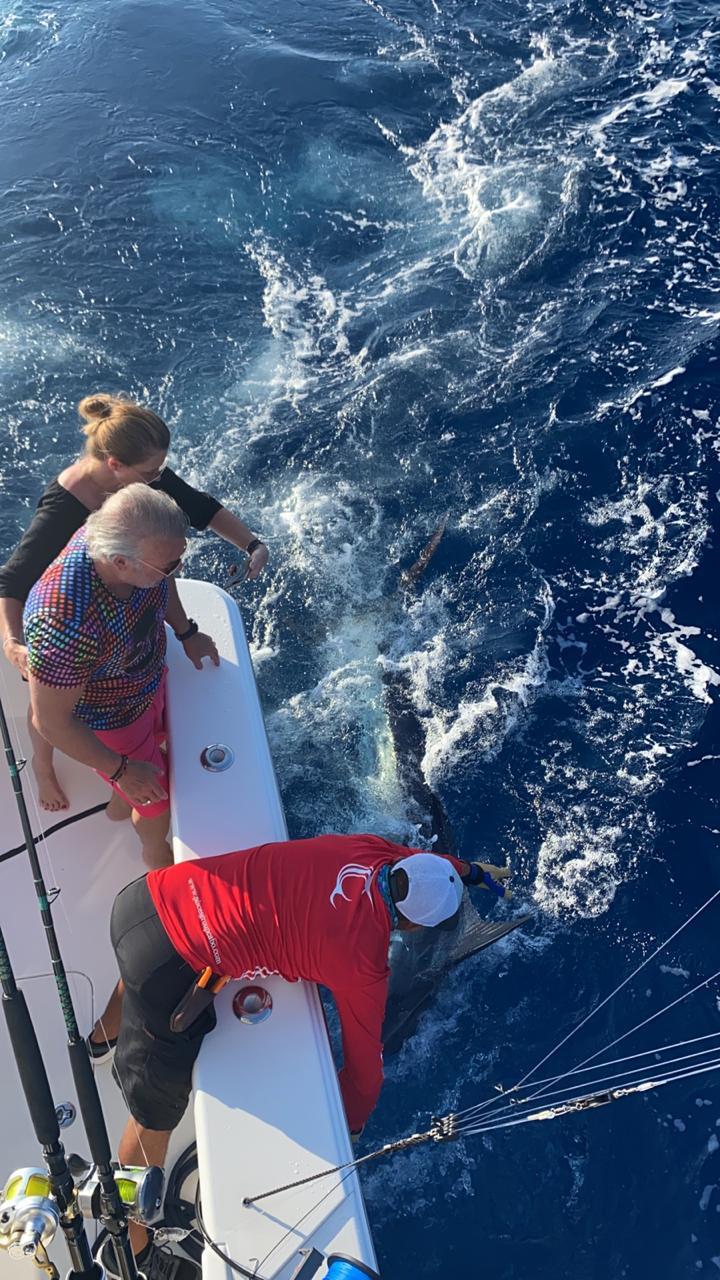 Pisces 37′ BBII with released the only Black Marlin of the week, an approximate 290 pounder by the Moran’s anglers from Florida. The black hit on a guacamayo lure close to the 95 Spot. Their previous day out fishing, they landed 4 Yellowfin including one of 79 lbs. 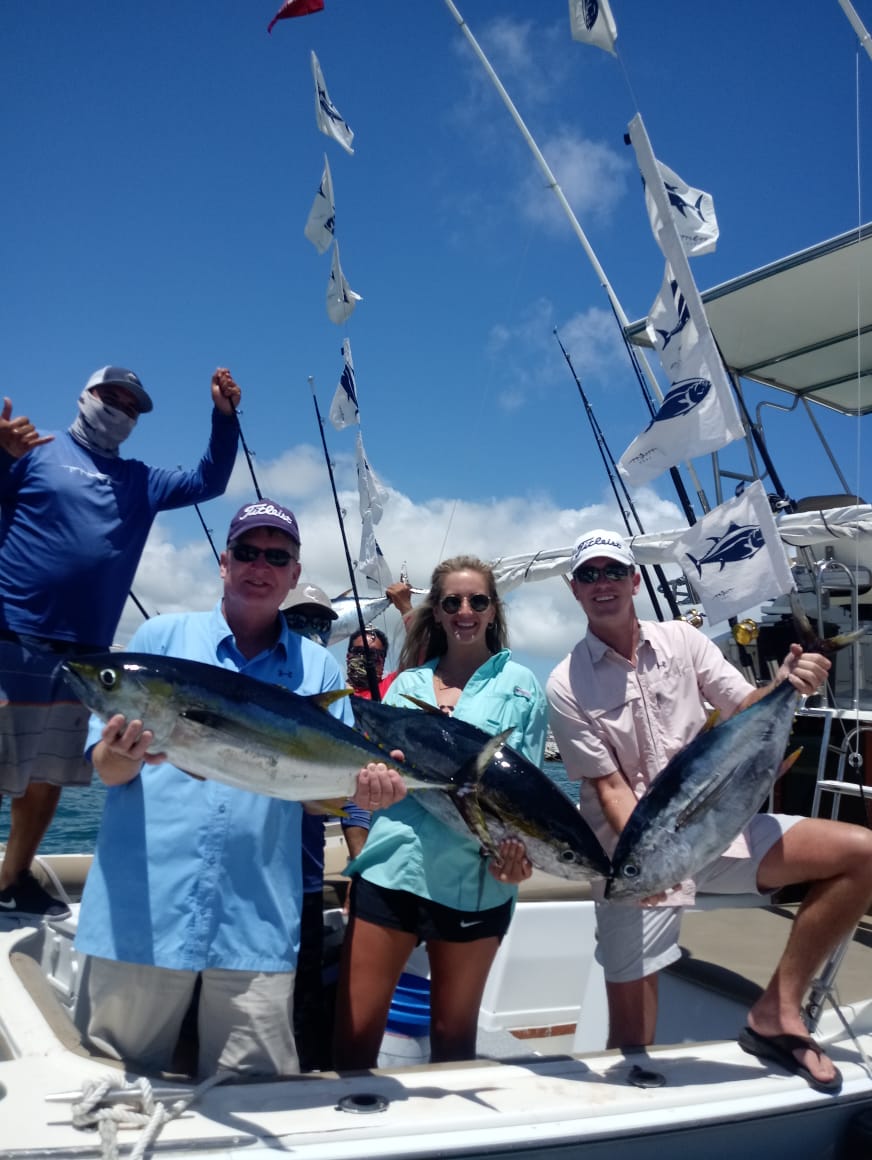 And speaking of Tuna, they really showed up this week, the best day in terms of sheer numbers being Sunday. Pisces 31′ Ruthless was our top Tuna boat with 38 Tuna in two days of fishing. Most fish averaged from 15 to 35 lbs each, and hit on cedar plugs, feathers and black/red lures near San Jaime. Pisces 31′ Rebecca followed suit with 19 Yellowfin in the week, some bigger than those on Ruthless. Deborah and Mark Pietz had a great day with 11 Yellowfin landed between 30 and 70 lbs each, caught outside of Migri?o area. 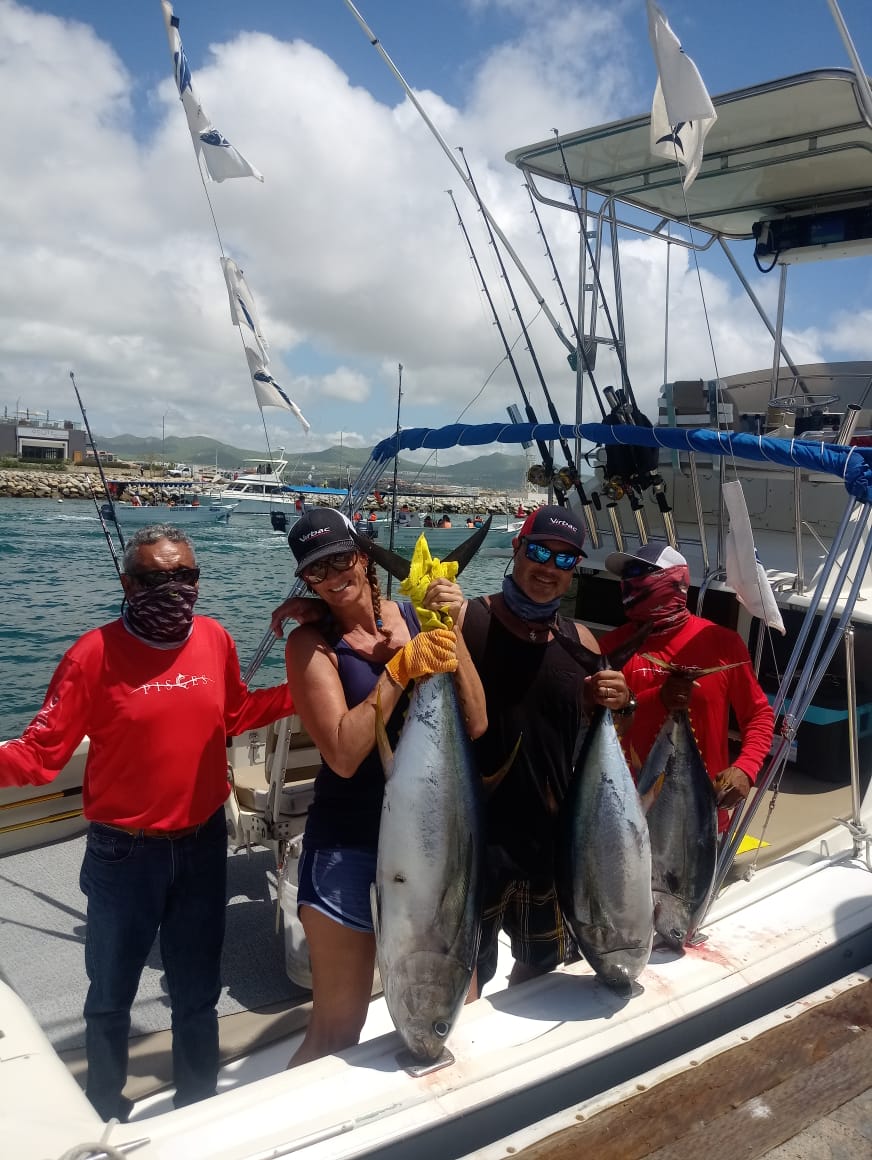 Mark and Deborah Pietz on Pisces 31′ Rebecca with some nice Yellowfin!

Angler Blair Jackson who fished on Pisces 28′ Andrea also did well, with a 69 lbs Yellowfin and 5 others around 20-40 lbs caught outside of the Cerro Blanco, hitting on cedar plugs and lures. 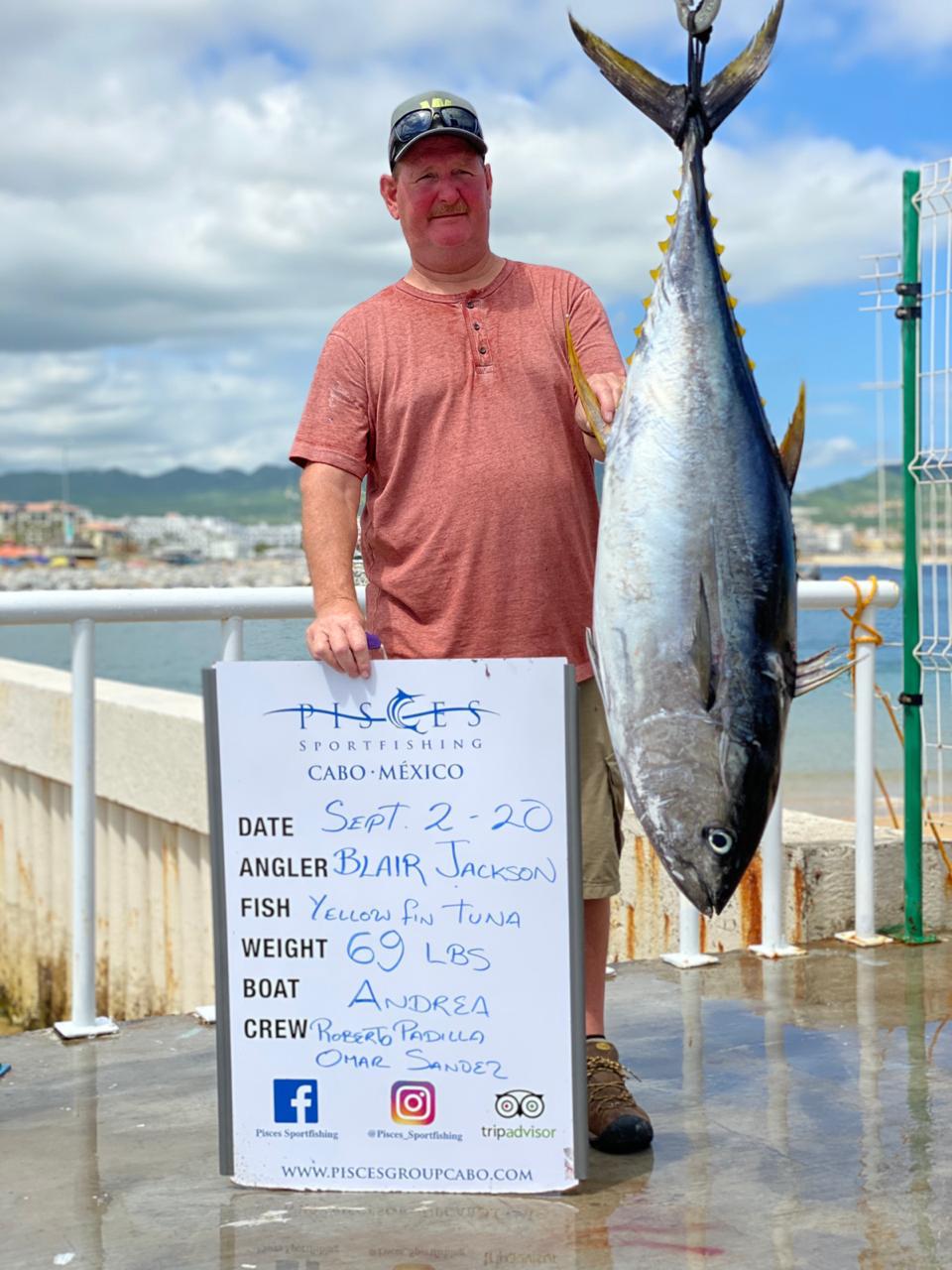 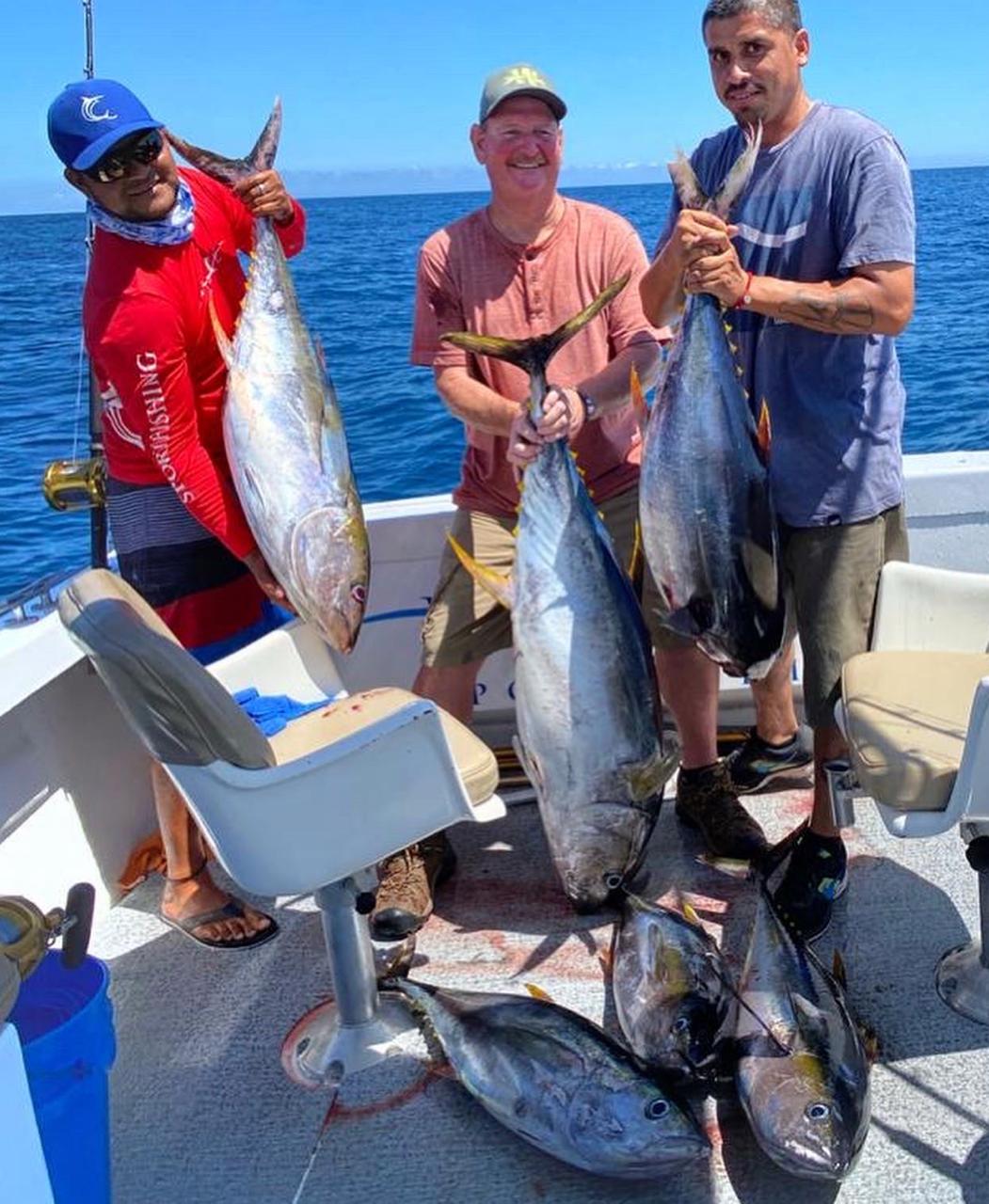 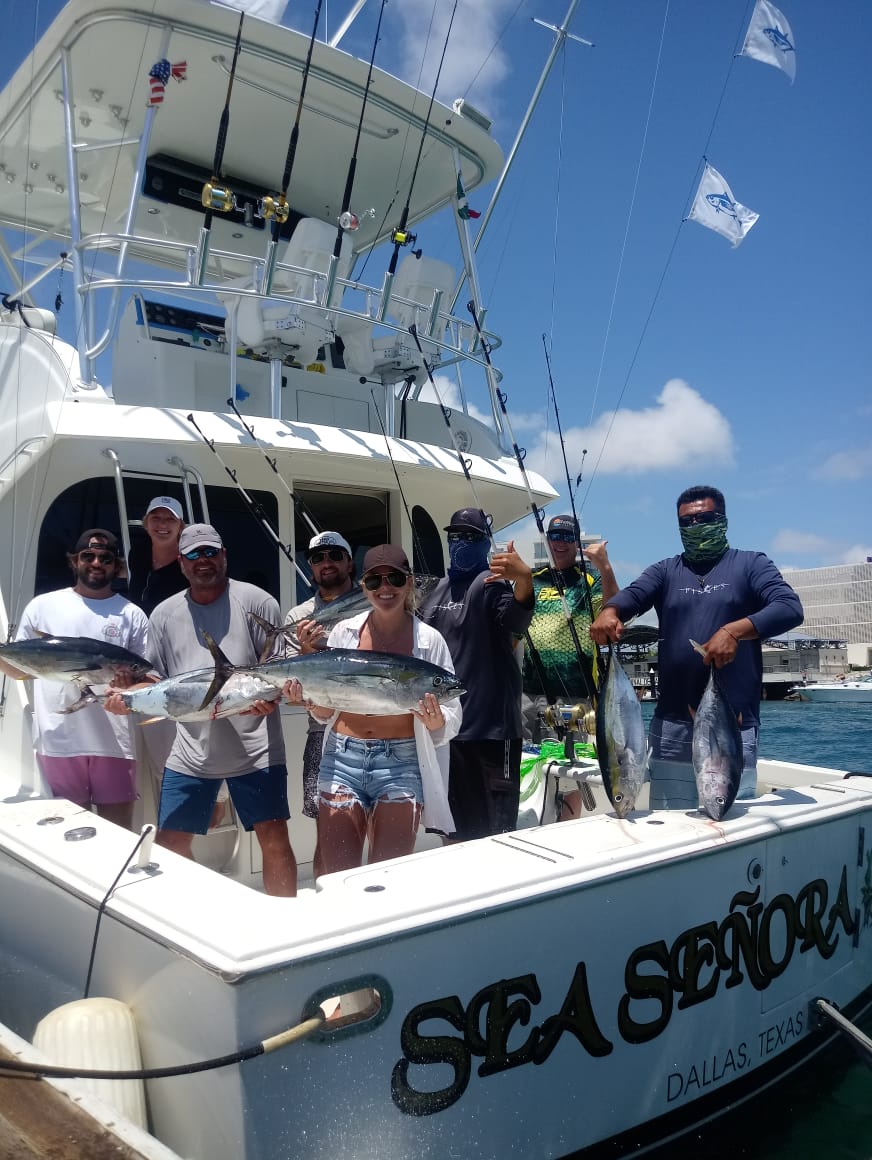 Pisces 32′ Bill Collector also did well with Tuna, a favorite for Captain Juan Lopez, with sizable fish every day they were out. Their largest catches averaged 80 lbs this week, with anglers Brent & Harriet Pennington and Clay and Lisa Massey landing 8 total from 15 to 80 lbs each. They headed to the 230 Spot to find them and hit on cedar plugs and feathers. 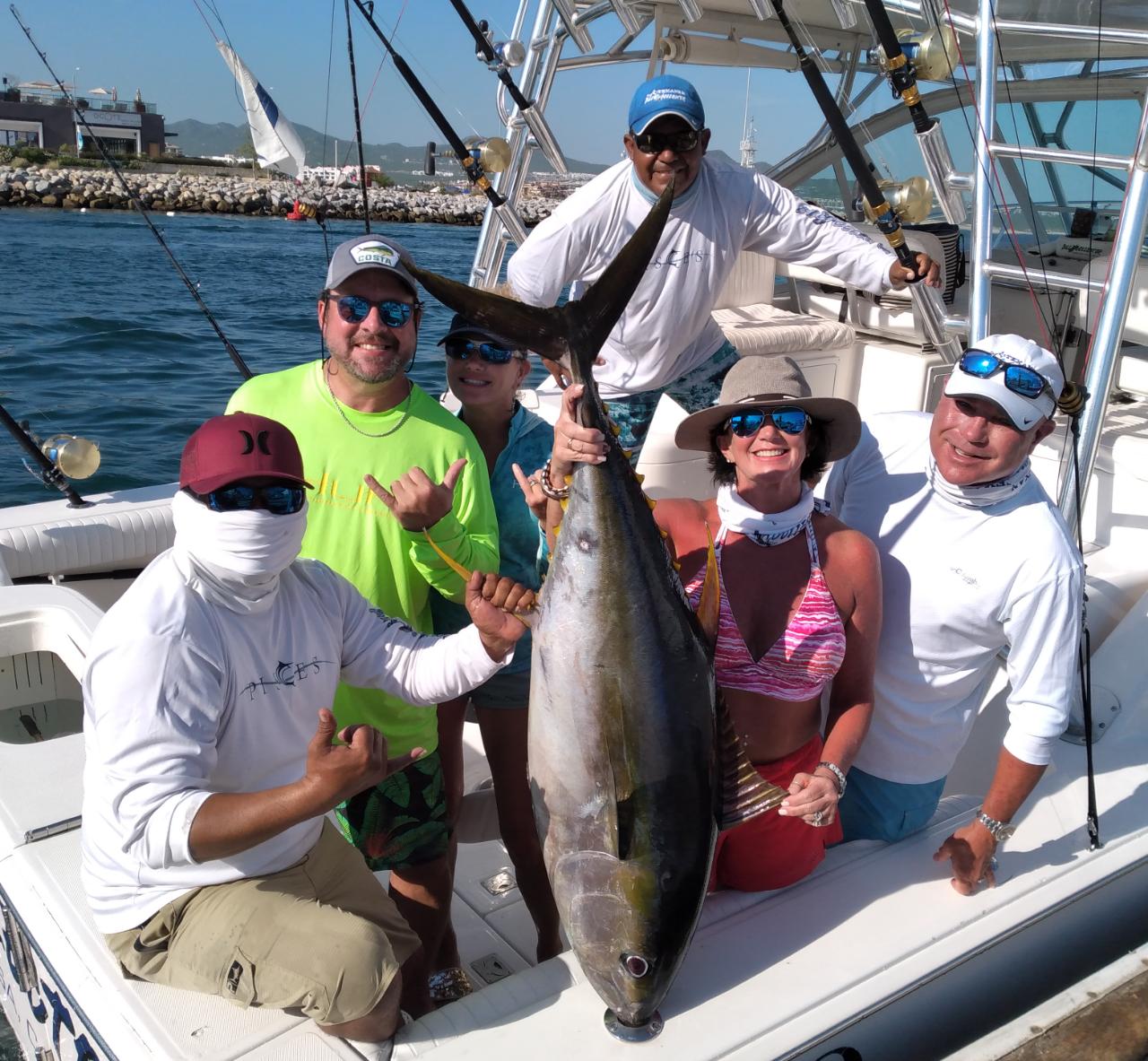 Pisces 31′ Tracy Ann and anglers Chris Griffin and Juan Quintero form Houston got lucky to find one of the few Dorado of the week, a 20 lbs fish that hit on dead bait outside of Migrino. Plus they kept 10 Yellowfin between 20 and 35 lbs. 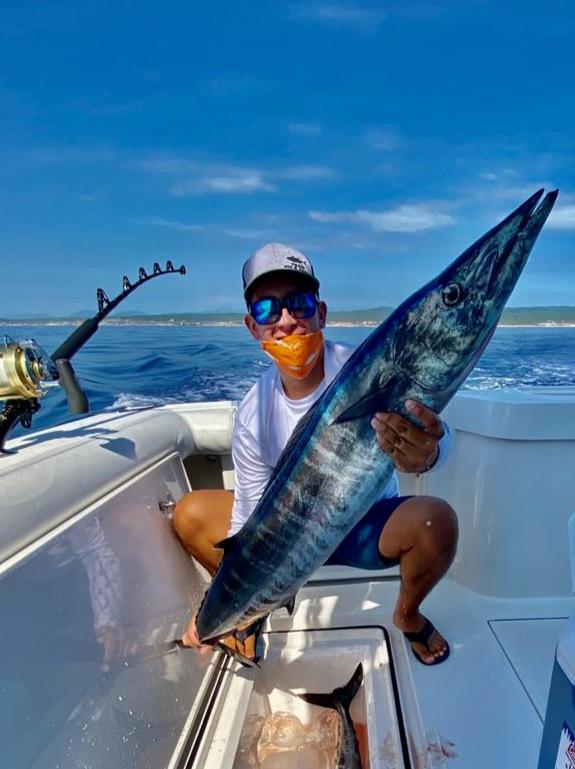 Pisces 35′ Bill Collector 2 also found Dorado, 4 in one day, with one released, but they went far to land them, near the Gordo banks. Bill Collector 2 was one of the few to land wahoo, as the bite has started to turn up near San Jose areas. They went 2 for 4 on Wahoo with anglers Larissa and Shayne White and Michael and Stefanny Fritz. Wahoo were about 22 and 29 lbs each and hit on rapala lures and ballyhoo near the Gordo Banks. 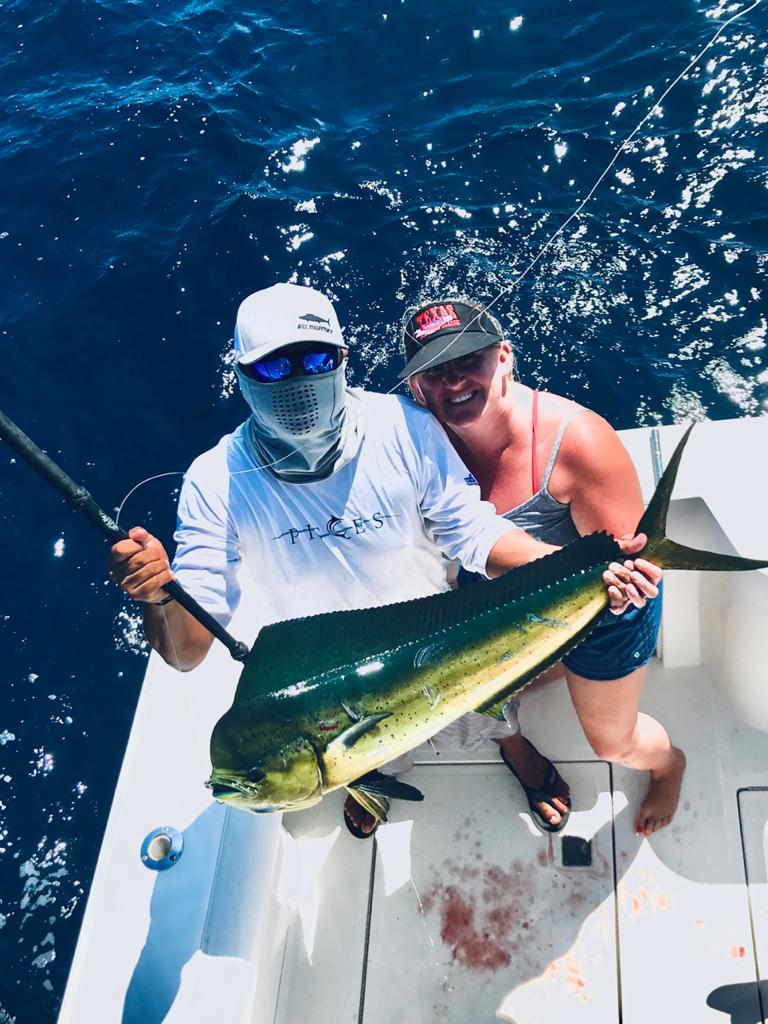