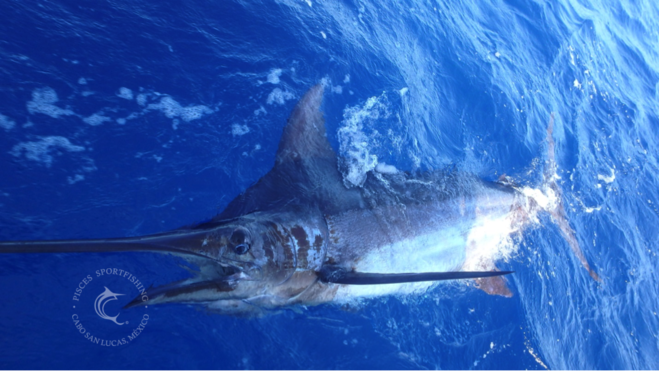 BILLFISH: We’ve always known that July signals the start of blue marlin season and this year the fish showed up right on time giving our anglers some great catches. Blue marlin are nowhere near as plentiful as striped marlin so catching one of these larger billfish is a thrill and a workout. July 4th was gave us some of our first blues of the season headed up by Pisces Andrea and anglers Richard and Eric Poppitz from Colorado, who managed to hook a 200 LB blue off of Medano Blanco after it took a live caballito.  This same day Pisces Ruthless caught a fish of similar size in the same area for the Toerner family from Austin, Texas. A couple of days later Tracy Ann was the hot boat releasing two sizeable blue marlin estimated at 280 and 300 LBS respectively,  for a group headed up by Joseph Capizio. These fish were caught at the Cabrillo Sea Mount and took a blue and white and petrolero lure. Don and Kristy Vargo fished with Brad and Tammy Ferguson aboard Pisces Knot Workin, a very nice 35 ft. Cabo and were thrilled to catch a blue marlin of 215 LBS as well as striped marlin that was released, then followed up a couple of days later with a 250 LB blue marlin, that was released by Matthew Fuston. Ruthless hit the blues again on July 8th with two nice fish estimated at 230 and 250 LBS for the Gierset family from Colorado; both fish took lures. Striped marlin fishing was even more active than the blues with the top one day boat being C Rod who released four marlin up to 130 LBS thirty eight miles out for Spencer and Kelly Craig. La Brisa was not far behind with three stripers released for Tom Ginn from Sedona, Arizona. Summer is definitely here and the fishing is hot and looking to get even better. Pisces anglers caught a total of 47 striped marlin and 6 blue marlin this week, with all but three fish released. 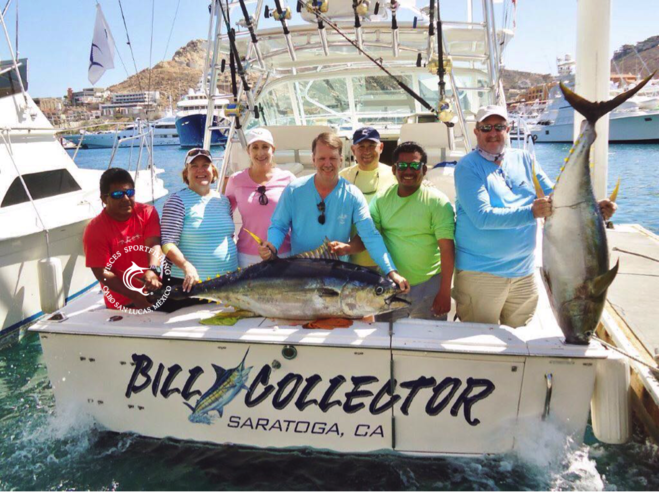 OTHER SPECIES: Fewer boats caught tuna than marlin, but when they did catch the numbers were higher with plenty of multiple catches giving us a total tuna count of 125 fish. We must say we don’t remember a better year for early large tuna and we again had several fish over 100 LBS this week. Largest tuna of the fleet was a beautiful 219 LB fish caught by group from Austin, Texas headed up by Christopher Lescher aboard Pisces Bill Collector. They headed out thirty eight miles from the 150 spot where they also landed a couple of football size fish. This boat was obviously on a roll as they went on to catch a 110 LB and 137 LB tuna on July 6th for the Hemingway’s from Texas. Fourteen year old John Caparone from Santa Fe, New Mexico had never been fishing before when he boarded Tiburon, little did he know he would be in one of the toughest fights of his young life when a huge tuna exploded out of the water and he was put in the chair.  John did extremely well to bring a 196 LB tuna in ninety minutes. Pisces C Rod gave San Diego anglers Dennis and Ryan Sanford, Raul Rodriguez and Art Turner, a run for their money with four tuna, the largest being a 117 LB specimen and a striped marlin released. To round out the week of big tuna Yahoo took Karl and Jill Burgess twenty eight miles out from Land’s End were they caught a 116 LB tuna on live bait. We saw an increase on dorado this week with multiple catches becoming more common in fact just fourteen boats caught sixty eight dorado between them, with the largest fish an impressive 60 LBS caught aboard Valerie by Michael Harwood who with friends, went on to catch a total of seven dorado and twelve tuna. There was a flurry of wahoo catches mid-week, though not in any one set area, as they were found far out and also at the Jaime Bank, where Hot Rod landed 40 and 50 LB wahoo for the Mehrten family who also caught five dorado. Boats concentrated offshore but the pangas that did go out caught small roosterfish, jack crevalle and one small hammerhead shark.

LOCATION: Bigger blues off of San Jose, smaller ones straight out, stripers both Cortez and Pacific, dorado diverse locations, tuna 25 to 40 miles out.

Based on the catches of Pisces