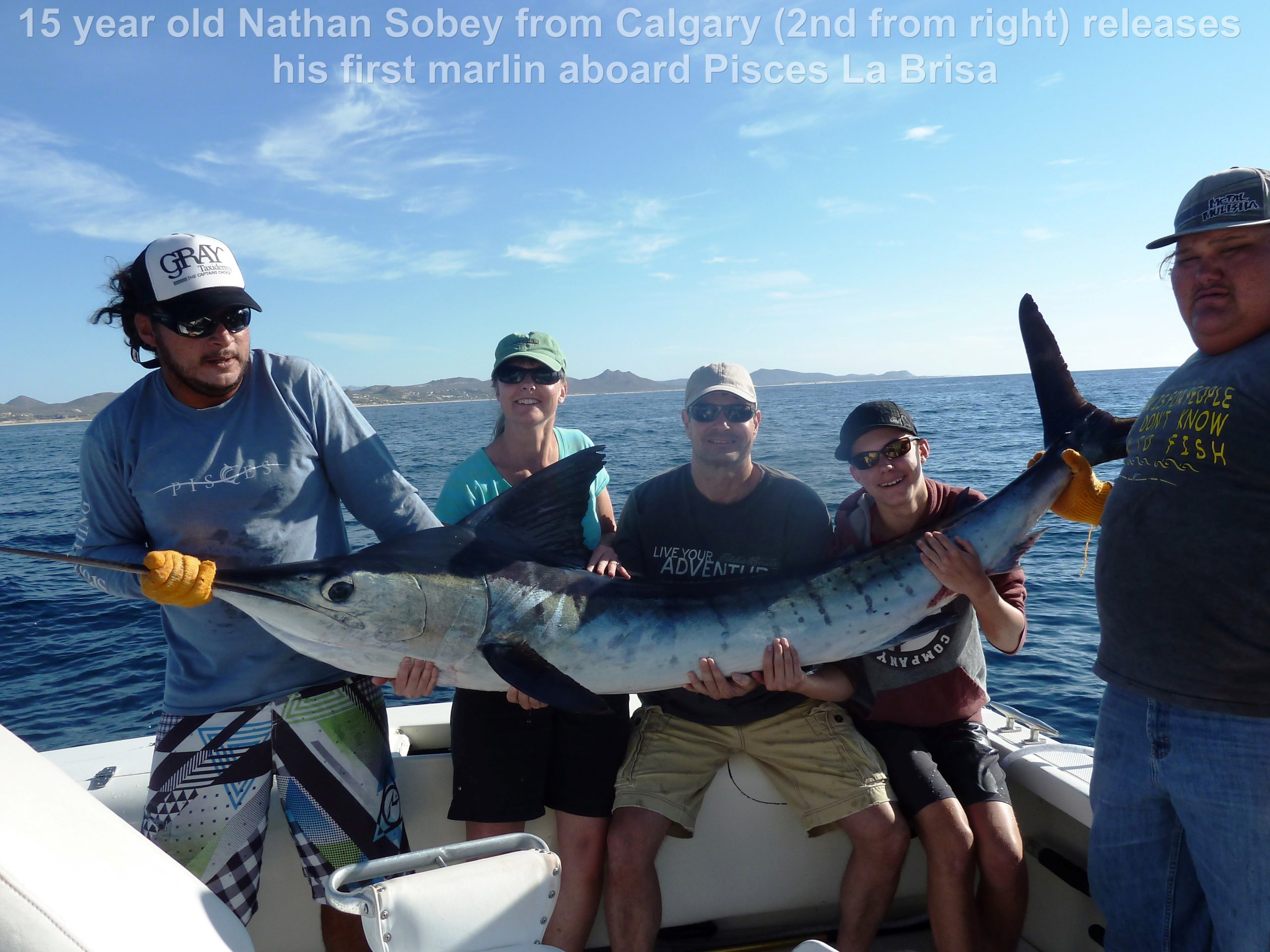 BILLFISH: We are pleased to report an improvement in the fishing this week, as the moon waned we still had some hit or miss days but also some outstanding ones. The water never really got cold so now with the moon gone all the signs are that the fishing will take an upturn. To start out the period Pisces Listo headed to the 95 spot on the Cortez side where they did well to release four marlin from 120 150 lbs. for Robert Russell & Todd Miller from Las Vegas & Kingwood Texas, respectively. This same day Pisces Rebecca had a great day too, a little further out at the Herradura, where they released three stripers and boated six dorado for Candy Johnson and friends from Dress, Idaho. Next day out Listo had the same anglers on board and not having luck at the 95 spot they motored further north and parallel to shore, which was the right move, as they ended up releasing six marlin, on live bait in front of La Playita. After this fishing dropped off again, with Punta Gorda producing a few marlin, but not for everyone. It was in this area that the Rebecca caught one of the largest stripers of the week; the fish caught & released by Patrick Mitchell from Illinois was right at the 200 lb. mark, it was estimated, and he was fortunate to get a couple of dorado too. On a day when very few boats caught fish Pisces La Brisa, dug deep and managed to catch the first ever marlin for fifteen year old Nathan Sobey from Calgary, Canada and as if that wasn’t enough they caught a nice wahoo for his dad Chris, a mako shark for his mom, Tracey, & then to round out the day, Nathan landed a dorado for the table – thanks Captain Rey & Deckhand Salvador for helping this family to fulfill a dream. On March 27th, Anthony Spiegelberg from Wyoming, new he was on the right boat, Rebecca, when they released five striped marlin and boated two dorado, twenty miles from the 150 spot.   A lone sailfish was caught by Rick Kiersh from Houston, Texas at the Herradura as well as two striped marlin, aboard Pisces Valerie.  A group of friends got together, who are usually spread out between New York, California & Arizona and booked Listo, the 35 ft. Cabo for March 28t; they were not disappointed as they ended up releasing six striped marlin at the 11.50 spot – well done Scott, Greg, Steve, Nick, James & Alex. Forty nine percent of our boats caught marlin this week, giving us a total catch of 71 fish released plus a sailfish. 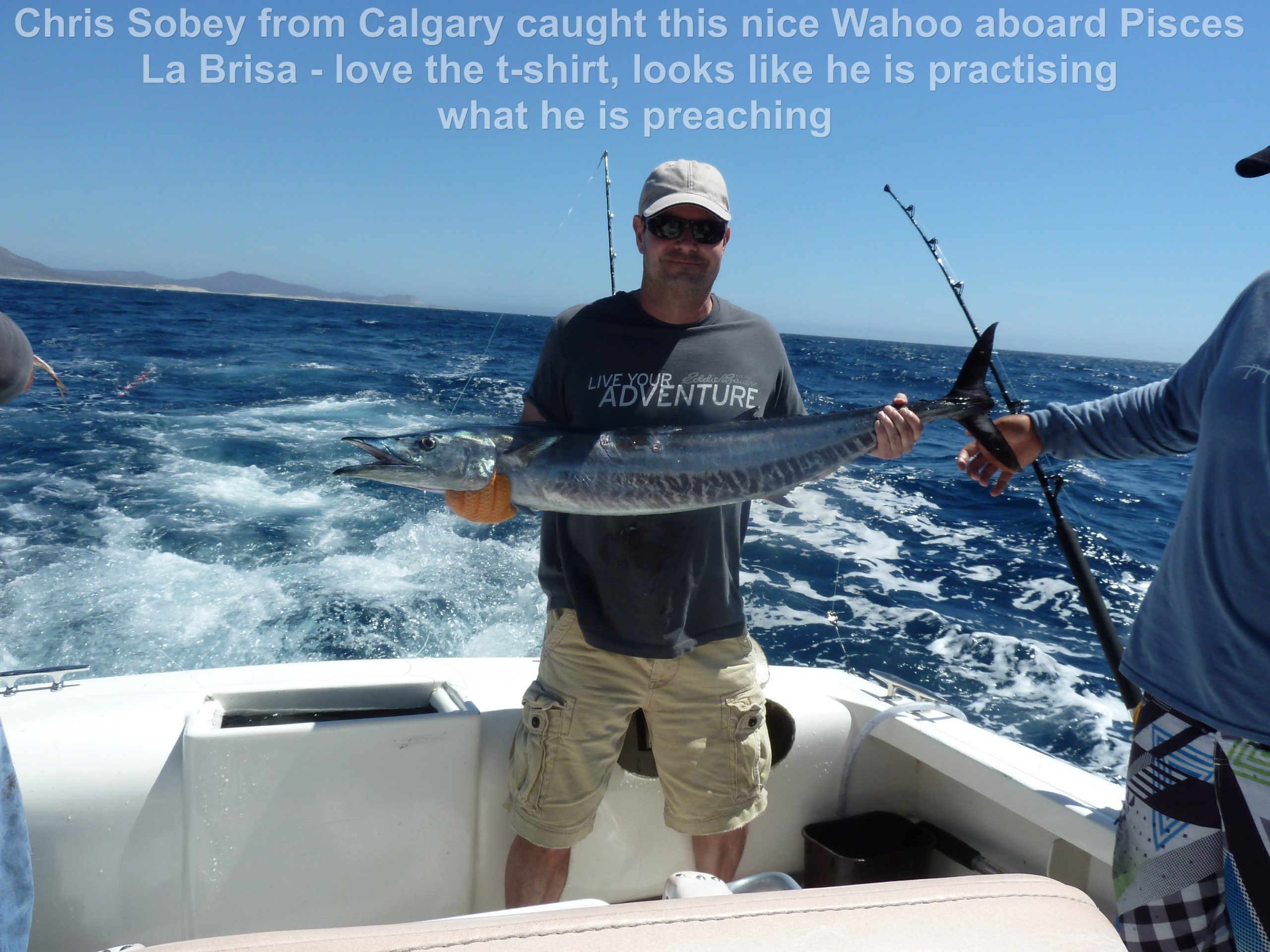 OTHER SPECIES: Dorado had all but disappeared from the Pacific but this week when boats fished the Cortez the catches were much better, with fairly regular catches of one to three fish; the exception being Rebecca, with six, mentioned above. The dorado are liking live bait at the moment, with the odd one caught on a lure. There was plenty of inshore action for sierra, a few roosters, and lots of skipjacks, fair amounts of jack crevalle, an odd needle fish, yellowtail & grouper. We had a few wahoo this week, but none more than 40 lbs. Just one Mako shark around 40 lbs. caught on La Brisa.
WEATHER CONDITIONS: Clear, sunny skies, except on March 28th when it was partially cloudy, seas calm to moderate.
LOCATION: Herradura, Punta Gorda, Palmilla, 95 spot, Cerro Colorado, Los Arcos, Old Lighthouse.
AVERAGE WATER TEMP: Warm at 72-74 F
BEST LURES: Live bait.